It didn’t take long for SEC fans to criticize the analysis of CBS broadcaster Gary Danielson in the LSU-Auburn game on Saturday.

One fan even pointed out that CBS itself quickly found a flaw in his analysis of a tough run by Shaun Shivers by showing a physical run last year, before Tank Bigsby’s supposed influence. Another fan was a proud momma after a 9-year-old took issue with Danielson.

One fan even tried the broadcast in Spanish, but still didn’t enjoy Danielson.

A Georgia fan even tweeted ahead of schedule a week before the Georgia-Florida game as he prepared himself for the apparent biased call of the game in Jacksonville, Florida. 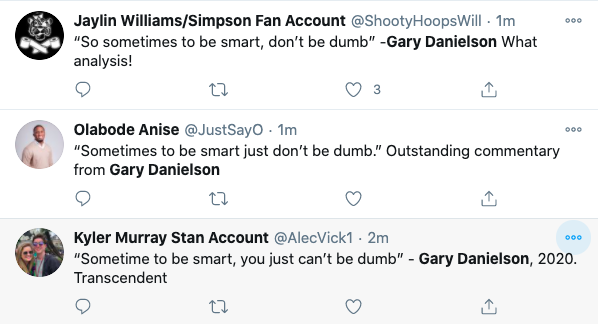 Here’s a sample of the criticism about Danielson:

Gary Danielson is confused because both teams are the Tigers. There should be term limits for Gary

@CBS it is awful watching any game on Saturday when you have to listen to Gary Danielson. Haven’t we suffered enough this year?

“Sometimes to be smart you just don’t be dumb”

I’m really digging how the #Auburn band is drowning out Gary Danielson’s voice.

I tried to go back to @CBSSports in spanish, but #garydanielson in another language was just as sickening to listen to.

I think #garydanielson wakes up on Saturday mornings, looks in the mirror, and tells himself to top the idiotic things he says the week before. #LSUvsAUB

LMAO Gary Danielson. If having plenty of leg was all that mattered.

Seconds after, CBS literally showed a highlight from 2019 of Shivers playin super physical. Can’t make this stuff up. Lol

Has anybody mentioned yet that Gary Danielson is like fingernails on a chalk board! What a 💩!

If you could punch anyone in the world in the face, who would it be be and why Gary Danielson?

Well, that was a boring, lackluster win for UGA! Get ready fan for that wonderful biased call against UGA by Gary Danielson next week on @CBSSports next week!#GoDawgs

The replay official should have immediately buzzed down to review that play…not wait until just before the snap.

The lack of awareness by Gary Danielson always amazes me. I don’t know why it amazes me, but it does. The size of the paycheck he gets…..

I had no idea how painful it is to listen to Gary Danielson. I’m so sorry, football fans. You deserve better.

Brad Nessler and Gary Danielson stink out loud. Get these geriatrics outta here.

Gary Danielson would watch your children open Christmas presents and nitpick the tape placement on the paper. Perpetual nitpicker.

Gary Danielson just called himself a stooge. Maybe he finally sees himself the same way millions of SEC fans have seen him for years.

Did Gary Danielson go to LSU? His commentary is really biased.

I truly feel like there is not a single sports fan that enjoys the commentary from Gary Danielson. NOT ONE.#WarEagle

@CotiHowell this a rigged game anytime Gary Danielson is in the booth on the call he’s the biggest Auburn Homer….

Why is Gary Danielson so fixated on where Auburn gets the ball? How often do teams successfully down a punt on the 1 yard line? #LSUvsAUB #LSU

When Gary Danielson said Finley can get away with those type of things in high school. South Carolina fans like: (we felt that) #LSUvsAUB 😂😂😂 pic.twitter.com/EWEBiR668k