It’s that time of year again. A few weeks into the regular season, we take the temperature of some coaching seats in the SEC.

One coach in particular has been able to cool his seat considerably. Texas A&M’s Kevin Sumlin is 3-0, going from unranked to No. 10 in the AP Poll already. Upsetting then-No. 16 UCLA in the opener was just what he needed.

Many others haven’t been so lucky, though. If they’re looking for someone to blame, they can stare in the general direction of Tuscaloosa. Once again, Alabama coach Nick Saban has the No. 1 program in the country and, if anything, might be even more loaded than he was with last year’s national title-winning squad.

An argument can be made that the Crimson Tide have separated themselves from the rest of the league, although boosters at other schools don’t want to hear that. There’s simply too much at stake, financially and otherwise.

Here are five coaches that I believe are feeling the pressure. While losses Saturday don’t equal pink slips Sunday, wins keep the buzzards at bay … for now.

Currently 1-2 and already 0-1 in the SEC, Auburn has made improvements defensively but continues to struggle on offense.

While the Tigers have the No. 1 rushing attack in the conference through three weeks at 261.7 yards per game, they’re only sixth with an even 5 yards per carry. In other words, Malzahn has been keeping the ball on the ground because the passing attack is so inept. His scheme just doesn’t scare people anymore.

Playing host to No. 18 LSU on Saturday, another loss might be devastating on The Plains and would move him further away from bowl eligibility.

The Mad Hatter has calmed down some of the fury surrounding him by benching Brandon Harris in favor of Danny Etling at quarterback.

Nevertheless, transfers from Purdue at the game’s most important position are rarely the difference between competing for national titles with ‘Bama and a return trip to the ho-hum Texas Bowl. If LSU can’t take care of business Saturday against a flawed Auburn team, Miles should expect a rude welcome upon his return to Baton Rouge. 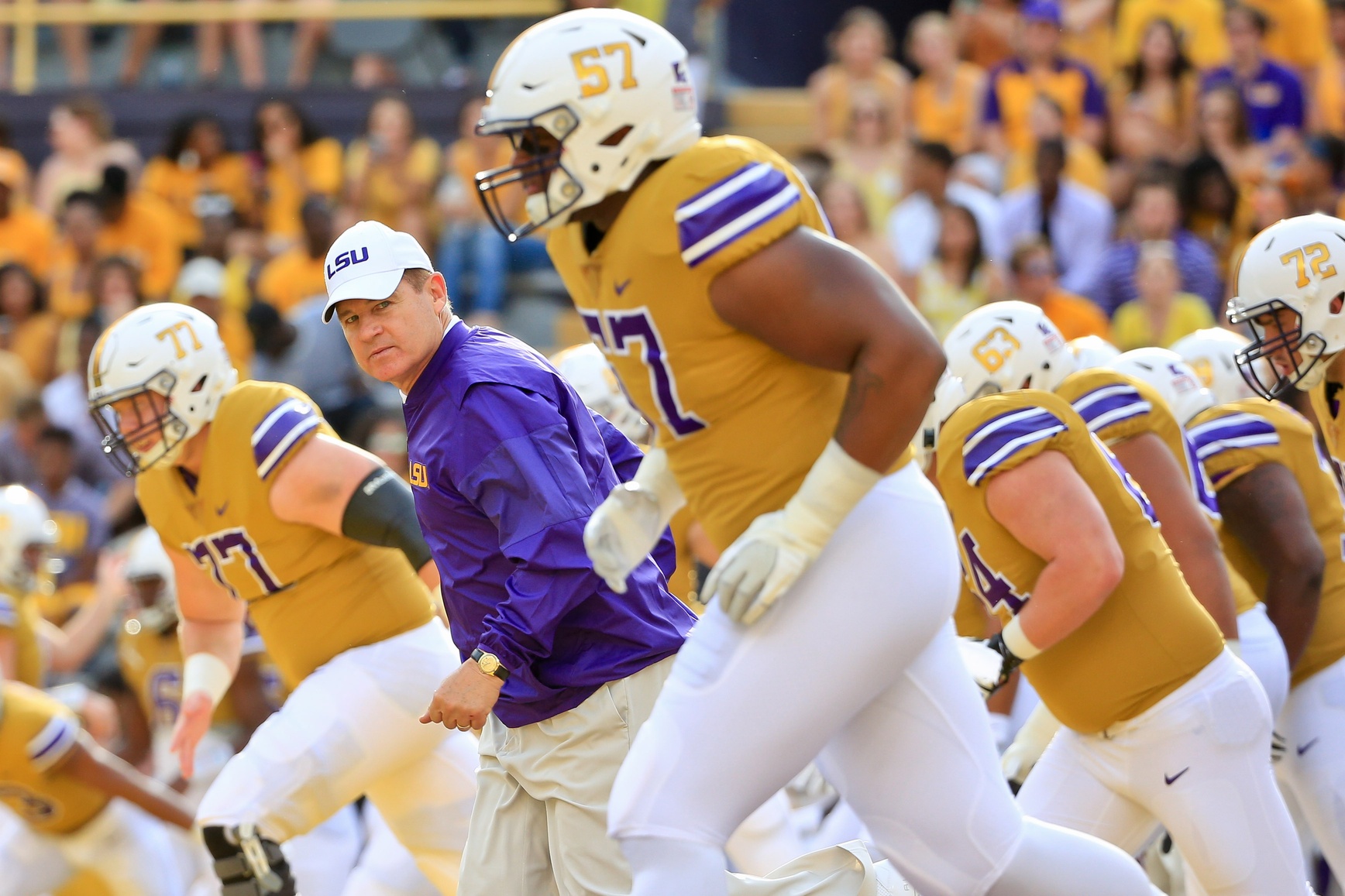 Miles is one of the best on the recruiting trail. But if he can’t get the most out of all that talent, perhaps somebody else can.

Potentially a sneaky squad in the East, Kentucky has instead lost to Southern Miss at home and gotten destroyed by Florida on the road.

Stoops has upgraded the roster in terms of pure physical ability, but it doesn’t matter much if he can’t coach it up to more wins. With his résumé as a defensive mind, there’s no excuse for that side of the football to allow 43.7 points and 528 yards per game. Both are dead last in the league by a wide margin.

Taking care of South Carolina at home won’t exactly save his job. And even if Stoops gets canned, a marquee name isn’t coming to replace him.

Tennessee would have to completely implode for Jones to get fired this season, but eventually he needs to beat Florida.

The Volunteers’ 11-game losing streak to the Gators is one of the most infamous in college football right now considering the high-profile nature of the rivalry. UT was the odds-on favorite to win the East during the preseason. However, so far the Vols look like the same fun-but-flawed club they were a year ago. 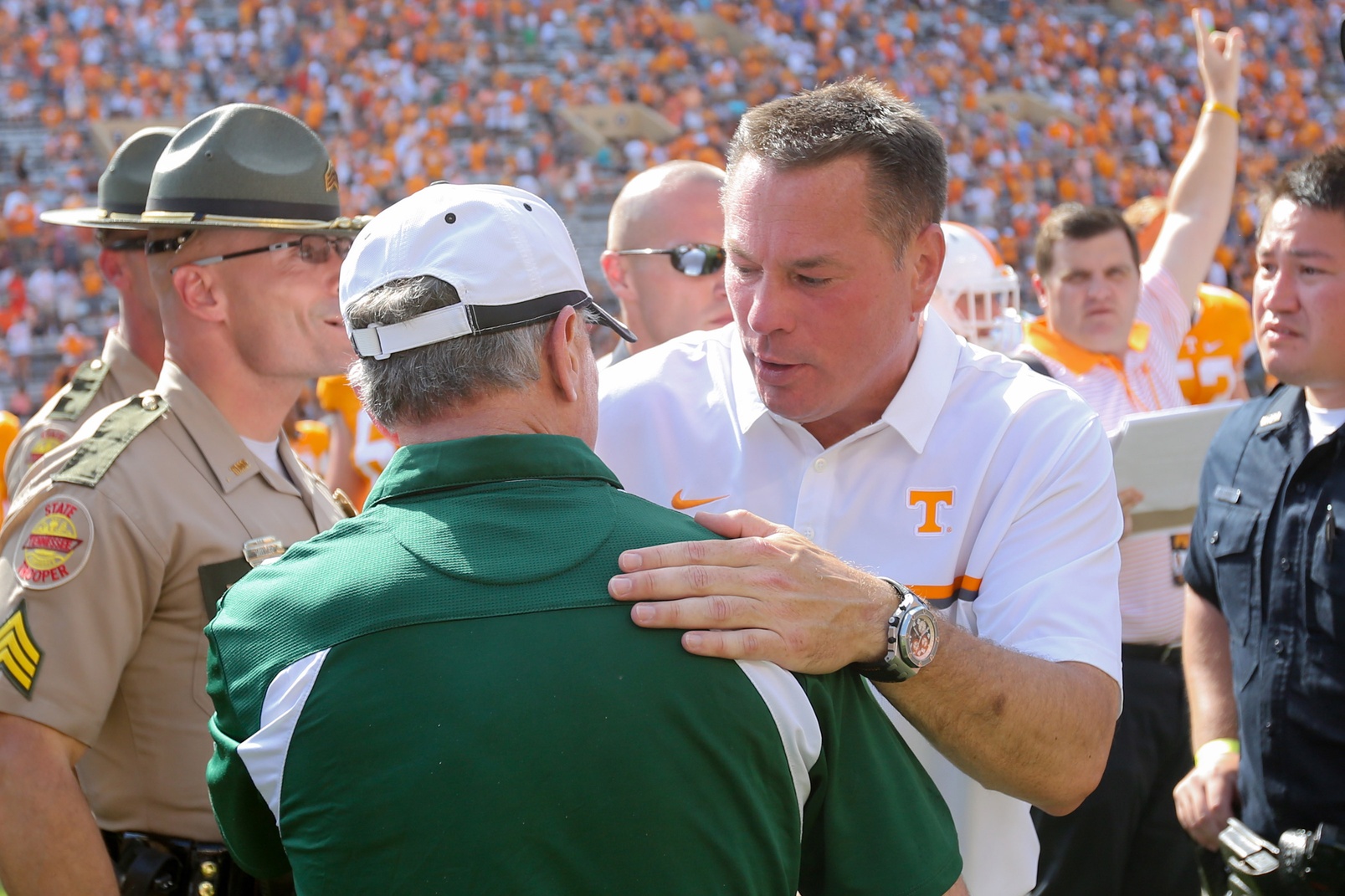 If Jones breaks the curse and defeats UF, he’ll earn so much job security. But if he can’t, Knoxville might start casually looking for someone who will.

Talking up Western Kentucky for Saturday like this is some sort of border-state showdown, Mason sounds desperate for even the impression of a big victory.

Mason has done wonderful things defensively at Vanderbilt. Players like Zach Cunningham and Oren Burks have NFL futures due in part to the coaching they receive. Nevertheless, even with Ralph Webb running the rock so well with precious little help, the Commodores are a dumpster fire offensively. They can’t throw it at all.

John Crist
John Crist is an award-winning contributor to Saturday Down South.
RECENT ARTICLES
SEC
2022-23 Bowl Schedule released, including dates, times and TV info
SEC
SEC/ESPN announce early season TV schedule, kickoff times for 2022 schedule
SEC
6 SEC teams crack top 25 in Athlon Sports' 2022 preseason rankings
SEC
The first part of the SEC on CBS schedule is out, so let's predict how the rest of it will look in 2022