Urban Meyer’s daughters, Gigi and Nicki, are not happy their father was the subject of signage fodder on ESPN’s College GameDay over the weekend.

Meyer infamously left Florida after a 7-5 season in 2010, citing a need to spend more time with his family and focus on his health. Meyer previously took a leave of absence after the SEC Championship Game in 2009 after checking into a local hospital with chest pains.

SEC fans and Meyer haters have mocked his health-related departure from Gainesville ever since:

Here is your winner of the Most “RT’d” (and Appropriate) @pizzahut GameDay Sign of the Day from Tuscaloosa. pic.twitter.com/9rOFfzyiKt

Meyer’s daughters, not amused by College GameDay’s wording on its retweet, responded with this: 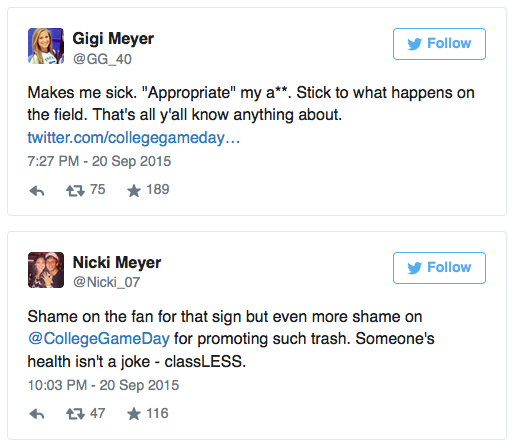