Having spent all week musing aloud about how Auburn is the perpetual little brother, and how Tigers fans navigate their daily lives with a finger shoved up their noses, we figured we would sew up the Iron Bowl pregame hype with a bang.

The question pending Saturday isn’t whether No. 5 Alabama will bend No. 15 Auburn over its knee and deliver a 60-minute spanking. The question is how it will happen, and to what degree the Crimson Tide will make Auburn want to revisit its absurd plea to secede to the SEC East.

It’s gonna happen, people. To put it in terms Auburn folk can understand, the hay is in the barn. Alabama can’t lose Saturday, and not just because it is a statistical certainty. It’s because, while evil occasionally takes a round or two, good eventually wins every prize fight.

And because we are already in the season of giving here at SDS, we hereby offer the five reasons Alabama is going to crush Auburn.

Alabama’s sophomore quarterback isn’t in this position by happenstance. Becoming the starting quarterback just happened a couple of games earlier than expected for Jones, as the plan all along was for Jones to succeed Tua Tagovailoa in the Crimson Tide’s system in 2020.

Now that the future is here, Jones is fully ready to step up and take what is his. The stage will be just big enough — Jordan-Hare Stadium isn’t an easy place to win at — for Jones to stay in the moment. The weapons around Jones are more than capable of making him look great. And Jones has the talent/moxie combination to shine under the glare of college football’s most intense rivalry.

4. Bo Nix is not Patrick Nix

Auburn freshman quarterback Bo Nix has a remarkable lineage, as his father Patrick is one of the few Tiger QBs with a winning record against Alabama. Patrick Nix came in for the injured Stan White to lead Auburn to a 22-14 victory over Alabama in 1993. After losing to the Tide as a junior, the elder Nix again led Auburn to a 31-27 win in ’95.

By all accounts so far, young Bo isn’t his daddy. Auburn hasn’t won a significant game yet this season because of Nix. He threw for 177 yards and tossed 2 interceptions in the opener against Oregon. He went for only 100 yards against Texas A&M. Florida picked Nix off 3 times. LSU limited Nix to just 157 passing yards. And Nix managed only 245 yards on 30 completions against Georgia.

Alabama’s defense will be the toughest Nix has seen all season. And unlike his old man, young Bo will wilt against the pressure.

3. This is Najee Harris’ moment, too 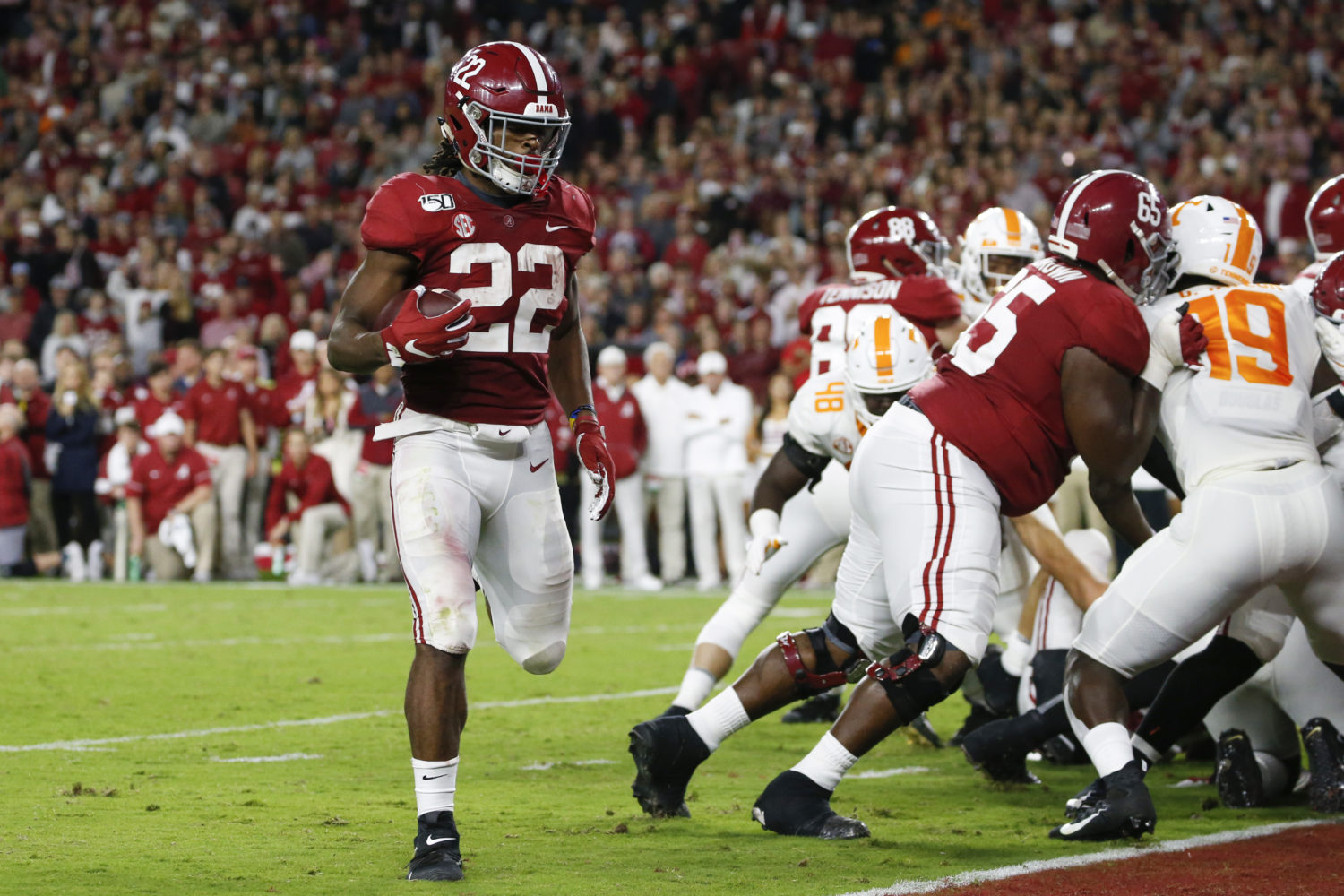 Najee Harris has gotten stronger in the second half of this season. Photo by: Butch Dill-USA TODAY Sports

Just as Jones has been angling for this position, so, too, has Harris. Running backs in Alabama’s system bide their time and mature into a force a tad later than do QBs or receivers. As a sophomore in 2018, Harris was a complementary piece of a Tide offense that passed its way to the brink of a national title game.

A year later, Harris patiently waited for Alabama’s offensive line to congeal into a run-blocking machine. And right as Tagovailoa’s injury double play began to hit, Harris hit his stride. With 153 yards from scrimmage and 2 TDs against Tennessee, 190 total yards and 2 more scores against LSU and 9 of his 10 rushing touchdowns coming in Alabama’s past five games, Harris will provide more questions Saturday than Auburn will have answers for.

It has become clearer and clearer every week the College Football Playoff committee regurgitates a new ranking. What to do with the Crimson Tide? All the talk and speculation and conjecture about Nos. 6, 7 and 8 in each week’s made-for-TV gabfest also ignore the No. 5 team in America.

You can’t reasonably consider lightweights like Utah and Minnesota without considering Alabama with clear eyes. And yet, we are a couple of weeks away from a remarkable hypocrisy of the CFP committee doing JUST THAT.

Don’t think for a single second that said hypocrisy hasn’t been fuel to the fire this week around the Mal Moore Football Complex. The imminent ranking snub is anti-rat poison at its absolute finest. It is Dabo Swinney chuckling about the ROY Bus times 100.

Alabama will be ready to smack some fools Saturday because the Tide knows it isn’t just playing Auburn, it is playing the rest of the country — all the anti-Alabama sentiment out there that thinks No. 5 is just a placeholder.

Just as we pointed out earlier this week, Saban has forgotten more college football greatness than Malzahn has ever known. It isn’t so much that Malzahn is a bad coach. He’s merely a mortal one trying to walk in the footsteps of an immortal one.

Auburn will never erect a bronze statue of Malzahn. Why? Because he won’t earn one. Auburn Nation continues its irrational belief that it is something above a 9-3 program. This isn’t a new phenomenon on the Plains. It is the reason it ran off Tommy Tuberville. It is the reason Gene Chizik hit the bricks two years after winning crystal.

There will be the occasional run toward an undefeated season, sure, because the combination of recruiting being an inexact science and unmarked Colonial Bank ATM cards are a strong-if-unpredictable combination.

But sustained excellence? It won’t happen until long after Saban heads to the lake to yell at the ducks for crapping on the lawn. Alabama is the 800-pound gorilla in the state and in the SEC. Auburn is the meerkat around the corner in the same exhibit space.