Dynasty far from over, expect Alabama to be favorite next season, too

TAMPA — This is what every other program across the landscape of college football feels like on a regular basis, Alabama fans.

But for the first time in 27 games, the Crimson Tide didn’t score more points than their opponents did. Thrilling as the College Football Playoff National Championship rematch with Clemson was Monday night, ‘Bama coming out on the losing end was a shock to many.

Nobody was more shocked than the Tide players in the locker room at Raymond James Stadium. Many of them — including the SEC Offensive Player of the Year, quarterback Jalen Hurts — had never experienced a loss at the college level. Not only were answers from players hard to come by, but so were questions from members of the media.

Never too high after a victory, coach Nick Saban is never too low after a defeat, either. He knew how to handle himself.

RELATED: What Nick Saban had to say following Alabama’s loss

Despite all the four- and five-star talent up and down Alabama’s depth chart, the premier player on the field was Tigers quarterback Deshaun Watson. In back-to-back CFP title games, he accumulated 825 yards passing and 8 total touchdowns.

The amazing thing — aside from Watson’s wizardry, of course — is that the Crimson Tide actually played spectacular defense for long stretches of this contest. They had four sacks. They recovered two fumbles. Clemson’s rushing attack was held to 91 yards and 2.2 yards per carry. This was not some sort of ‘Bama collapse. 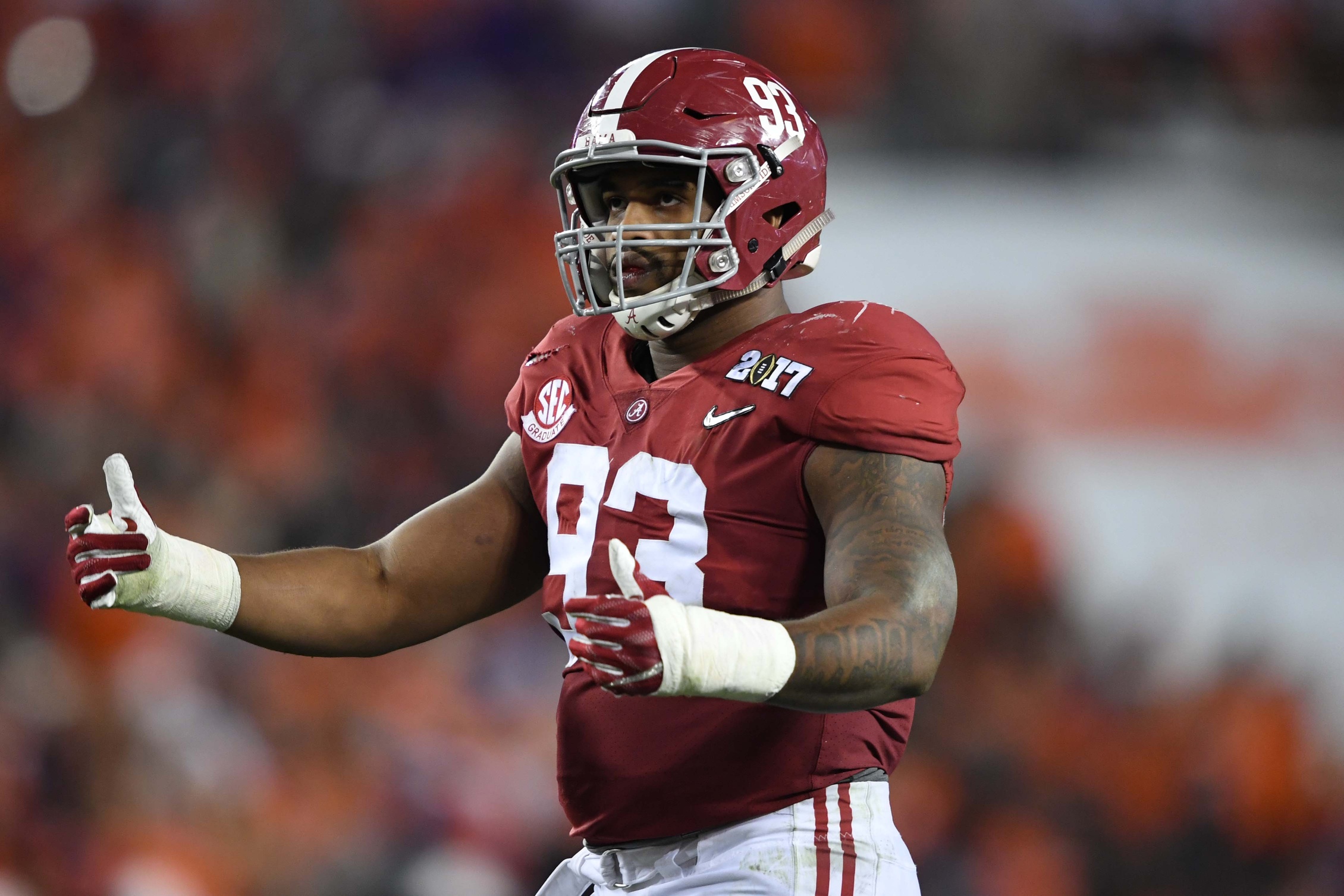 The Tide were simply outlasted by the best signal caller they’ve faced this season. They were lucky to beat him last year, to be honest.

“You’ve got to give him a lot of credit,” defensive end Jonathan Allen (above) said. “He’s a competitor, and that’s what you expect. It was a full 60-minute game, and we knew that going into this game it was going to be that. He made the plays when they needed and we didn’t, so you’ve got to give Clemson the credit. They won the game.”

Allen, the No. 1 defender in America, was little more than an observer when Watson fired the game-winning strike with 1 second left in regulation.

“The last play of the game, I’m not really sure what happened,” he said. “I was on the line trying to rush. That’s something I’ll have to go back and look at film and answer the question at a later time.”

Even with the offense stuck in a rut to some degree with first-time coordinator Steve Sarkisian, Alabama seemed to be in control until Clemson took its initial lead with 4:38 to play. Needing to respond, Hurts and Co. did just that.

Damien Harris moved the chains on a do-or-die 4th-and-1. Sarkisian dug deep into his playbook — a really gutsy call at the time — and pulled out a double pass from receiver ArDarius Stewart to tight end O.J. Howard. One snap later, Hurts scrambled his way 30 yards to paydirt in electrifying fashion. The freshman had done it again.

It looked like ‘Bama was going to snatch victory from the jaws of defeat after all. Prepare to drop the crimson-tinted confetti.

“Like Coach always says, it’s going to be a 60-minute game, so that’s basically what it was,” Howard (below) said. “We couldn’t get the ball going a lot on offense, but we had to stay patient and keep working hard, trust our offense. And they went down and scored, we came back and scored with two minutes left.” 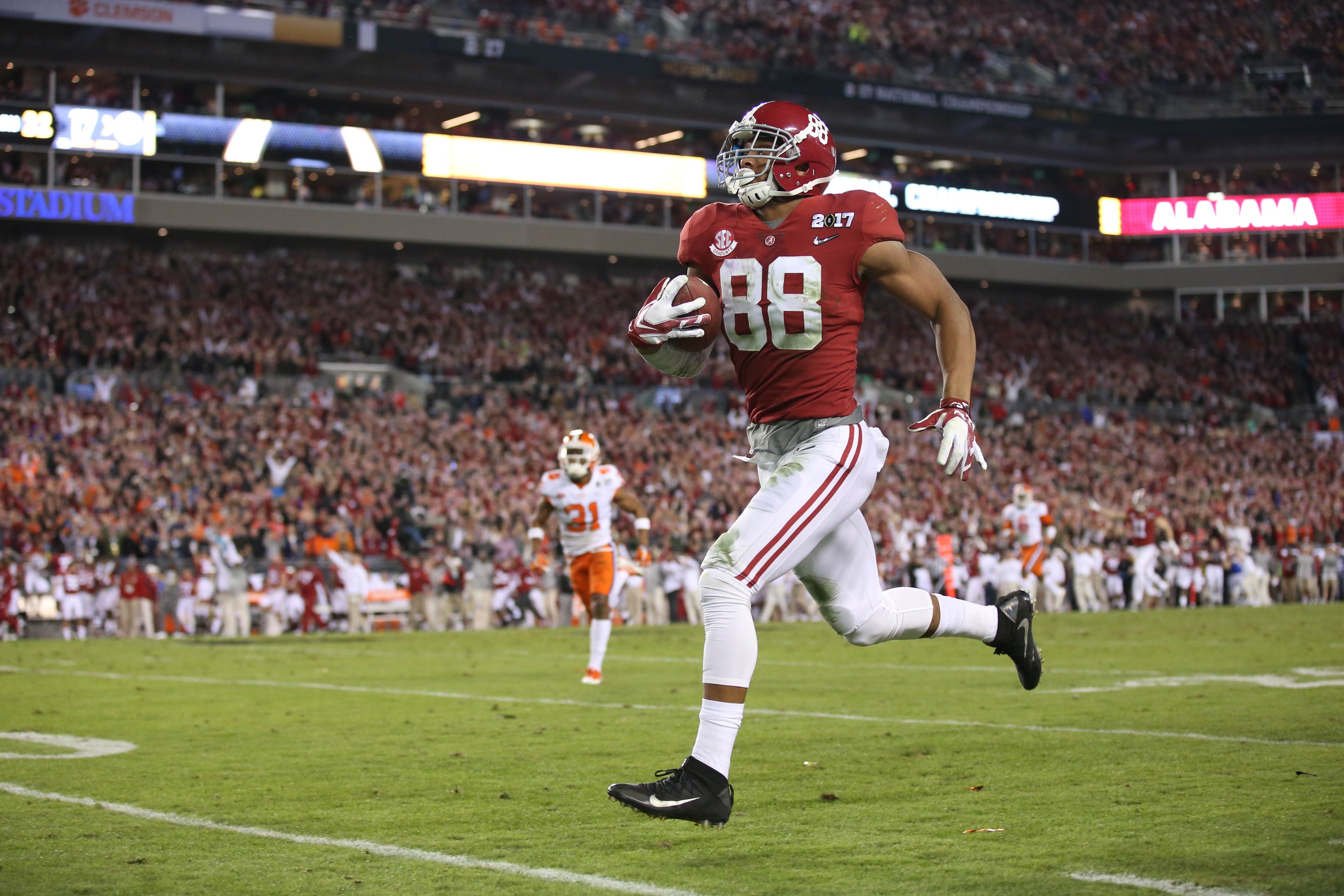 The Tide did make one mistake, though. They left too much time on the game clock for Watson. In this day and age, 2:07 is an eternity.

“It was just an up-and-down game, like you’re saying, but that’s football,” Howard said. “Clemson is a great team, and we knew it was going to be a tough game. Basically, that’s just football. You’ve got to go out and play for 60 minutes.”

Still, anybody suggesting that the Alabama dynasty is over hasn’t been paying very close attention. Even with potential first-round picks like Allen and Howard on their way to the NFL, more blue-chippers are lined up and ready to go.

Make no mistake about it, the Crimson Tide will be atop the preseason polls again come this summer. Hurts can only improve as a passer — he was less than effective throwing the ball throughout the postseason — seeing that he’s still only 18 years old. As for the defense, annual domination is always the expectation.

It took a last-gasp effort from an elite QB to knock ‘Bama off the mountaintop, but nobody enjoys the ascent more than Saban.

“I will remember this team as a group of winners, great competitors, guys that showed tremendous resiliency throughout this season,” he said. “In some of the games we got down in, some of the games we didn’t play very well, they kept coming back. It was demonstrated in this game today.”

There will be no dancing on the Tide’s grave. They’re not dead yet. So long as Saban is in charge, the road to the title goes through Tuscaloosa.