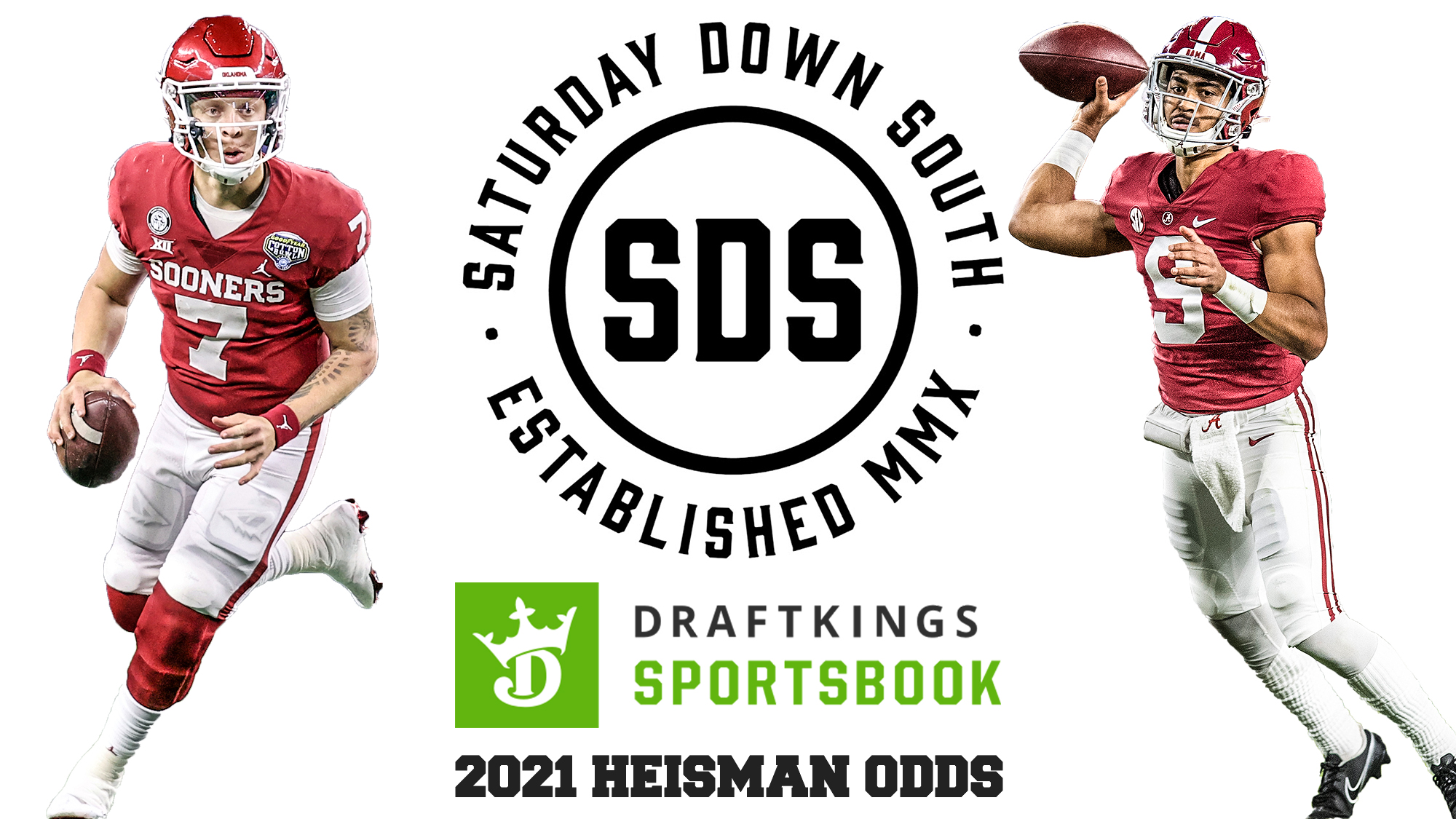 Sure, the relevancy of this sports betting category from the new calendar year’s opening odds to the very end can never be disputed, but kicking off a brand-spanking-new college football season with rabid fans back in the building brings a special feeling both so incredibly unique and tough to describe.

Once Week 1 comes and goes, the race for the Heisman Trophy becomes as real as anything across the sports nation. So much so that both veteran and novice sports bettors take deep dives into this prestigious sports gambling category.

Who will be the kid to take the Heisman from Alabama’s DeVonta Smith, Alabama’s game-breaking weapon that captured it in 2020? Will it go back to a quarterback, perhaps in the form of Oklahoma’s Spencer Rattler, Clemson’s D.J. Uiagalelei or Alabama’s Bryce Young?

Fortunately for the football-hungry fans of the SEC and elsewhere, Saturday Down South has the country covered via 2021 Heisman Trophy odds from an in-depth and expert perspective.

C.J. Stroud moves to -210 as the heavy favorite after dismantling Michigan State. Stroud threw for a ridiculous 432 yards and six touchdowns in the Buckeyes’ 56-7 victory over the 12th-ranked Spartans.

Kenneth Walker III’s 146-yard, one-touchdown performance in a loss against Purdue catapulted him to the No. 2 spot (+280). Bryce Young lost a little ground himself, moving from +165 to +180, but the Alabama quarterback still maintains a solid lead as the favorite.

Ole Miss quarterback Matt Corral slides from +305 to +450 after he there for 289 yards and no touchdowns to an interception in his team’s disappointing 31-20 loss to Auburn.

Alabama’s Bryce Young increases his lead over Matt Corral in a big way after the former’s 52-24 beatdown of Tennessee. Meanwhile, Pitt’s Kenny Pickett jumps from +2100 to +950 thanks to his 403-yard, five-touchdown performance in his team’s ridiculous 77-7 victory over New Hampshire.

Alabama’s Bryce Young holds on to a slight lead at +178 to Matt Corral’s +183. The big mover of the weekend comes in the form of new Oklahoma starting quarterback Caleb Williams, who is now on the board at +3750.

Despite Alabama’s shocking loss to Texas A&M, quarterback Bryce Young maintains his slim lead in the Heisman Odds at +190. Ole Miss quarterback Matt Corral did game some ground (+200), but he still has plenty of work to do moving forward.

And just like that, Bryce Young retakes the lead thanks to Alabama’s thumping of Matt Corral’s Ole Miss team this past weekend, 42-21.

Ole Miss junior Matt Corral maintains his lead over Bryce Young after a bye week for the Rebels. Alabama quarterback Bryce Young put up 313 yard and five touchdowns to one interception in his team’s 63-14 thrashing of Southern Miss.

There’s a new leader in the house, and his fans want him to keep rolling.

Now that Week 1 is in the books, the updated list is out. Alabama’s Bryce Young still leads the way at +450 after his team’s 44-13 thrashing of the ACC’s Miami Hurricanes.

The odds-on Heisman Trophy favorite played splendidly in his first crack at it with the fans back in the building. He finished with 344 yards and four touchdowns (to no interceptions) on an extremely efficient 27 of 38 passing.

Meanwhile, Oklahoma’s Spencer Rattler didn’t exactly enjoy himself in the opener. The Sooners barely squeaked past Tulane in Week 1, 40-35 (coupled with its classy pregame gesture), but Rattler threw two picks to just one interception and 304 yards (30 of 39 passing).

While Oklahoma’s young quarterback displayed the skills that made him the preseason Heisman Trophy favorite, the redshirt sophomore must be chomping at the bit to get back on the field.

Whether or not you have confidence in Spencer Rattler matters very little to the kid himself. The young Sooner quarterback recently dangled a strong message prior to the 2021 college football season.

Rattler, 20, threw for 3,031 yards, 28 touchdowns and seven interceptions over the course of 11 games in 2020—his first as the team’s full-time starting quarterback. The Phoenix, AZ native enters the 2021 season as the odds-on favorite to capture the Heisman Trophy.

No Trevor Lawrence, no problem. (Well, at least for the most part.) When stud Clemson quarterback Trevor Lawrence missed a couple of November games this past season, young DJ Uiagalelei stepped right in and impressed.

Throwing for 914 yards and five touchdowns to no interceptions, Uiagelelei did his part in the two starts he made. Unfortunately, he lost the Notre Dame game in South Bend, IN, but it wasn’t because of the quarterback.

Uiagelelei is currently +750 to win the 2021 Heisman Trophy.

With Jones in New England with the Patriots, it’s now Young’s team. The overwhelming consensus is that the kid is more than ready to take over as the on-field leader for Nick Saban. The oddsmakers agree, placing him third in the Heisman Trophy odds list at +900.

Never count out the Big 12, however, as the conference’s ability to put up points is undisputed. Similar to the mini-Oklahoma run in 2017 and 2018, Baker Mayfield and Kyler Murray, quarterback Spencer Rattler is currently leading the pack at +600.

It’s tough to pick against Rattler at this moment. Granted, it’s still springtime, so a lot can change, but Rattler has everything set up for an extraordinary statistical 2021 campaign in the free-flowing Big 12.

How to Bet on the Heisman Trophy

The winner of the Heisman Trophy is consistently one of the top college football futures betting markets. One wonders if John Heisman, the first athletic director of the Downtown Athletic Club in New York City and namesake of the trophy, envisioned the magnitude of today’s Heisman-sports betting market back in 1935. In a betting world, the odds aren’t great on that thought.

In order to bet on the Heisman winner, follow these simple steps:

Where to Bet on the Heisman Trophy

There are plenty of legal online sportsbook options that offer Heisman Trophy betting. Here are some of the top options, along with a huge free bet at Caesars Sportsbook.

DraftKings Sportsbook offers up to $1,060 of free bets and has a robust offering of college football games and futures markets. Perhaps most importantly, DraftKings Sportsbook is among the best online operators when it comes to offering both in-game live betting options and pregame profit boost specials.

FanDuel Sportsbook offers a first-rate app experience and an industry-best $1,000 risk-free first bet for new users. Like other top sportsbooks, FanDuel has expansive college football betting options and provides a Heisman market throughout the year.

Get started today for a $1,000 risk-free first bet to wager on the 2021 Heisman Trophy winner at FanDuel Sportsbook.

BetMGM is backed by one of America’s most prestigious gaming brands and offers new players a $500 first deposit match. Like its competition, BetMGM offers a full range of college football games and futures markets, including Heisman odds.

Get started today for a $1,000 risk-free bet while gambling on the 2021 Heisman Trophy winner at BetMGM.

Here is a look at the past Heisman Trophy winners, dating back to the 2000 season.

Winners by position: quarterback (17), running back (3)

A look at the recent Heisman Trophy winners, as well as their opening and closing odds.

The Heisman Trophy race is often misunderstood by the general betting public. The general public still views Heisman candidates in the same way that political parties view their candidates — through the lens of electability. Or, in the case of the Heisman, viability. Conventional wisdom dictates that you have to be an established player from an established and powerful program to even entertain the notion that you could be enshrined as one of the game’s greats.

The preseason Heisman odds going into the 2019 college football season offer us an important example. Trevor Lawrence and Tua Tagovailoa entered the 2019 season as co-favorites to hoist the trophy at 3:1 odds. They had just played against each other in the national title game and were the faces of the two most dominant programs in the sport. To casual fans, it was a no-brainer for them to share the spotlight as preseason Heisman favorites. But to savvy veterans of the sports gambling space, the only thing noteworthy about two players separating themselves from the pack over the summer was that it inflated odds for everyone else.

To put it bluntly, the prevailing wisdom surrounding Heisman odds is wrong and that disconnect is born out in the final Heisman voting year after year. Only one preseason Heisman favorite has gone “wire-to-wire” since 2000. All it took from Marcus Mariota (9:2 preseason odds) was a near-flawless season (TD-INT Ratio 42:4) and a berth in the inaugural College Football Playoff. In contrast to Mariota’s favorite-to-recipient feat, is the fact that eight of the past 10 Heisman winners weren’t considered Top 10 candidates in the preseason by oddsmakers. Joe Burrow (40:1), Kyler Murray (30:1), Lamar Jackson (100:1) and Derrick Henry (25:1) represent a new wave of Heisman profitability for sports gamblers. And after a run of one-year wonders who took home the hardware as preseason “FIELD” bets (Cam Newton, Johnny Manziel, Jameis Winston) in the early 2010s, sportsbooks finally started to post more comprehensive preseason lists. The average offering has essentially doubled from the 20-25 player range in 2010 to a 35-40 range in 2019.

Heisman longshots have proven to be incredibly profitable in the past 10 years, but their odds quickly come down to earth once the general public has seen them play. The Heisman winners over the 2015-2019 seasons saw their preseason odds fall by an average of 68% from the preseason through Week 3.

This illustrates that for a gambler to capture worthwhile value, they often need to have skin in the game before the season starts.

The start of the 2020 season offered a similar situation as our 2019 example. Neither Lawrence nor Tagovailoa were Heisman finalists in 2019, but that didn’t stop oddsmakers from setting up the 2020 preseason Heisman odds in nearly identical fashion. Lawrence was joined by Justin Fields as a co-favorite falling in the 4:1 to 9:2 range. And as we now know, of course, neither Lawrence or Fields are expected to win the trophy.

Hedging Strategies When Betting The Heisman

Hedging is when a gambler places a bet on the opposite side of their original wager in order to reduce losses or to guarantee a profit. Despite the simplicity of the tactic, casual gamblers often fail to consider hedging opportunities. For small-stakes gamblers, in-game hedging might not be worth their time, but that isn’t true of futures betting. Even small wagers can net huge returns and are worthy of thoughtful hedge strategies.

Season-long futures for individual players and teams present a host of hedge opportunities, some clear and others more convoluted. As shown above, pundits and the public are awful at predicting who will end up as a Heisman finalist. In fact, four of the five Heisman presentations between 2015-2019 have included at least 1 finalist who entered the season as a 100:1 longshot or higher. Simply having a finalist with long odds can guarantee you money by properly hedging is a game-changer for most casual bettors.

If you were fortunate enough to place a bet on Joe Burrow before Week 3 of the 2019 season, you had a ticket paying out between 40:1 and 200:1 on the Bayou Bengal. Even if you had waited until the end of the regular season to hedge, the 3 other eventual finalists all presented decent value and insurance with Fields (6:1), Jalen Hurts (17:1), Chase Young (100:1) all offering handsome payouts.

While it appeared that Burrow was a “lock” by Week 13 during the 2019 season, this same hedge strategy would have saved Tagovailoa bettors the year prior. The Crimson Tide signal-caller was listed as a -900 favorite during Week 13 but would be overtaken by Kyler Murray just two weeks later. If you had spread out your risk by betting the likely finalists in Week 13 (Murray+600, Dwayne Haskins+6000, Will Grier+1100) you would have turned a gambling heartbreak into a decent payday.

If you are making preseason Heisman bets, targeting longshots with the potential to become finalists instead of winners is one way that you can turn an all-or-nothing proposition into a less volatile and more profitable long-term strategy. This brings into play running backs, wide receivers and defensive players that you might not have considered at all in previous seasons.