ST. PETERSBURG, Fla. — Mississippi State won the St. Petersburg Bowl 17-16 over Miami of Ohio. It wasn’t pretty, but it was a victory nonetheless.

With just 14 seconds left in regulation, the Bulldogs looked to be on the wrong end of one of the biggest upset losses in SEC bowl game history. All the RedHawks needed was a routine 37-yard boot from kicker Nick Dowd.

But in the end, MSU made one more play than Miami. With the Dogs having already blocked an extra point earlier in the game, Nelson Adams managed to get his big paw on the ball — he’d noticed on tape beforehand that Down tends to have a low trajectory — and block what could’ve been a gut-wrenching field goal.

Mississippi State fans came to the Sunshine State hoping to see a dual-threat quarterback do his thing at Tropicana Field.

For most of the first half, they saw exactly that. Unfortunately, it was the RedHawks’ Gus Ragland, not their beloved Nick Fitzgerald. While the Bulldogs were sleepwalking for most of the initial 30 minutes, Miami built a 9-7 lead.

Ragland was sharp prior to intermission, completing 12-of-17 passes for 122 yards with 1 touchdown and 0 interceptions. Despite not being known as much of a runner, he even sprinkled in 35 yards on 8 carries. Buoyed by a couple of trick plays — a fourth-down conversion, too — the RedHawks showed no signs of a holiday hangover.

MSU may have enjoyed a bit too much egg nog on Christmas Day. There were precious few rattle-worthy moments early for the cowbell-clad crowd.

Fitzgerald (below) woke up on his final possession before going back to the locker room for adjustments. A pretty wheel route to Aeris Williams set up a 2-yard TD plunge from the 6-foot-5, 230-pound passer, although the Dogs still trailed 9-7 at the time. 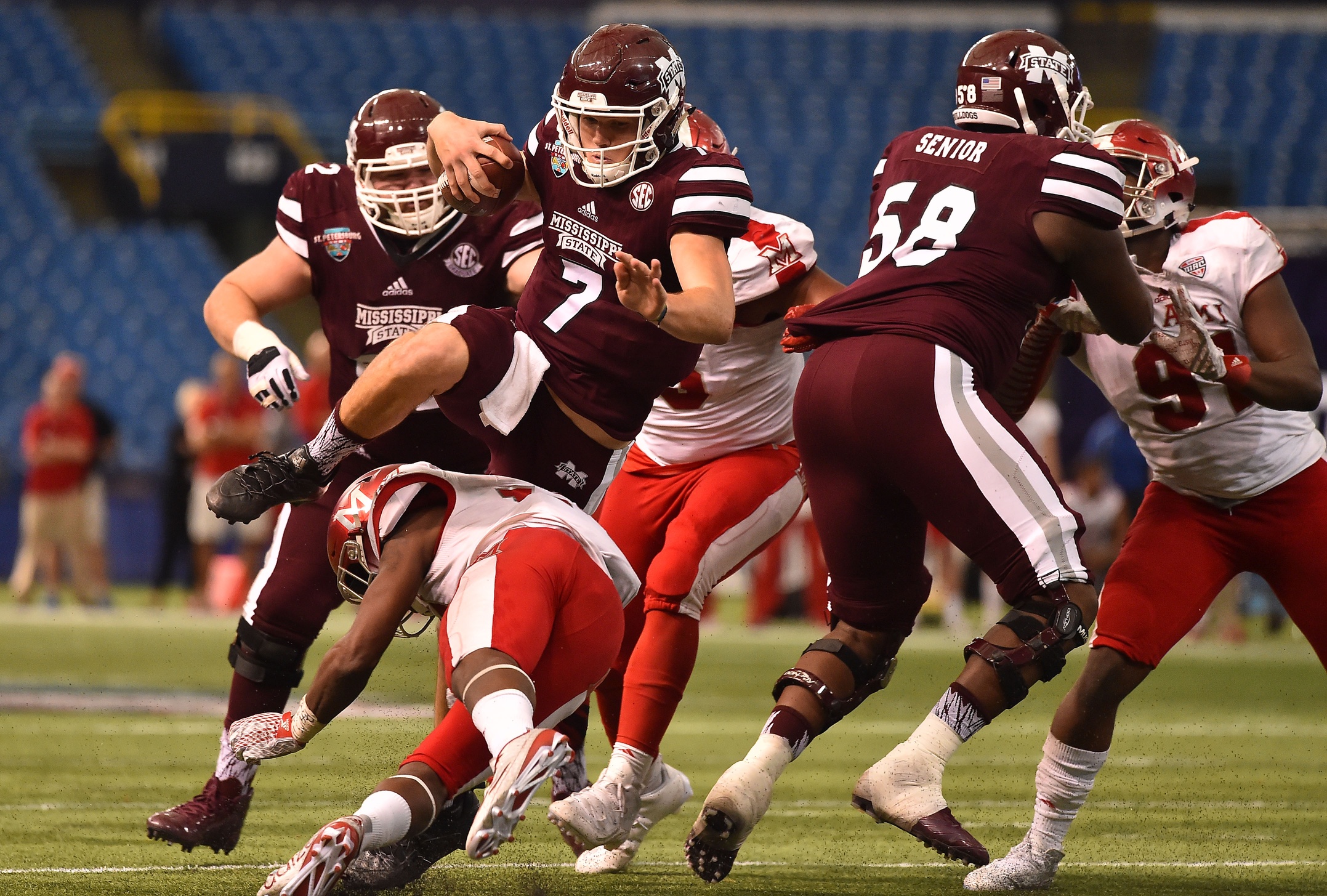 A statistical monster for the majority of the campaign, Fitzgerald was held to 6-of-13 passing for 63 yards — to be fair, his receivers occasionally were all thumbs — without a score or an INT in the first half. However, he was fortunate a pair of poor decisions resulted in drops by WarHawks defenders. He did run for 43 yards on 9 attempts.

With a 44-yard touchdown run in the third quarter, breaking tackles along the sideline, Fitzgerald seemed to find his mojo again.

When it was all said and done, Fitzgerald threw for 126 yards and ran for an additional 142. Much more effective as a runner than a passer, he eventually proved to be too much for Miami’s smaller defenders to handle.

Mississippi State coach Dan Mullen potentially put his team in harm’s way late, turning down a 40-yard field-goal attempt from Westin Graves — he’d been good from as long as 48 this season — in order to go for it on 4th-and-2 from the enemy 22-yard line. Damian Williams entered for Fitzgerald, whose helmet was knocked off on the previous play, and threw wildly incomplete.

Given new life, the WarHawks got in position to steal it with a 23-yard strike from Ragland to James Gardner, who outjumped the MSU secondary.

In the postgame press conference, Mullen’s justification for the fourth-down call was that a first down would essentially seal the game. He did admit, though, that the end result made him look less dumb than he could’ve been.

Regardless, the fact that the Bulldogs needed to convert on fourth down in the final minutes to put away a 6-6 program from the MAC — let alone required a near-miracle play on special teams — speaks volumes for Mullen and Co. It was only two years ago and change when the Dogs were undefeated and the No. 1 team in the country.

As we soon turn the page from 2016 to 2017, it’s difficult to get a read on this Mississippi State club going forward.

Just a sophomore, Fitzgerald is arguably more advanced at this stage of his career than his highly decorated predecessor, Dak Prescott, who is an NFL star. Prescott never ran for 1,385 yards, which was Fitzgerald’s final tally.

That being said, it still remains to be seen if Fitzgerald has as much upside as a passer — and, therefore, as a signal caller in general — as Prescott. From his junior season in 2014 to his senior year in 2015, Prescott improved dramatically from the pocket. Fitzgerald still has a long way to go making routine throws. 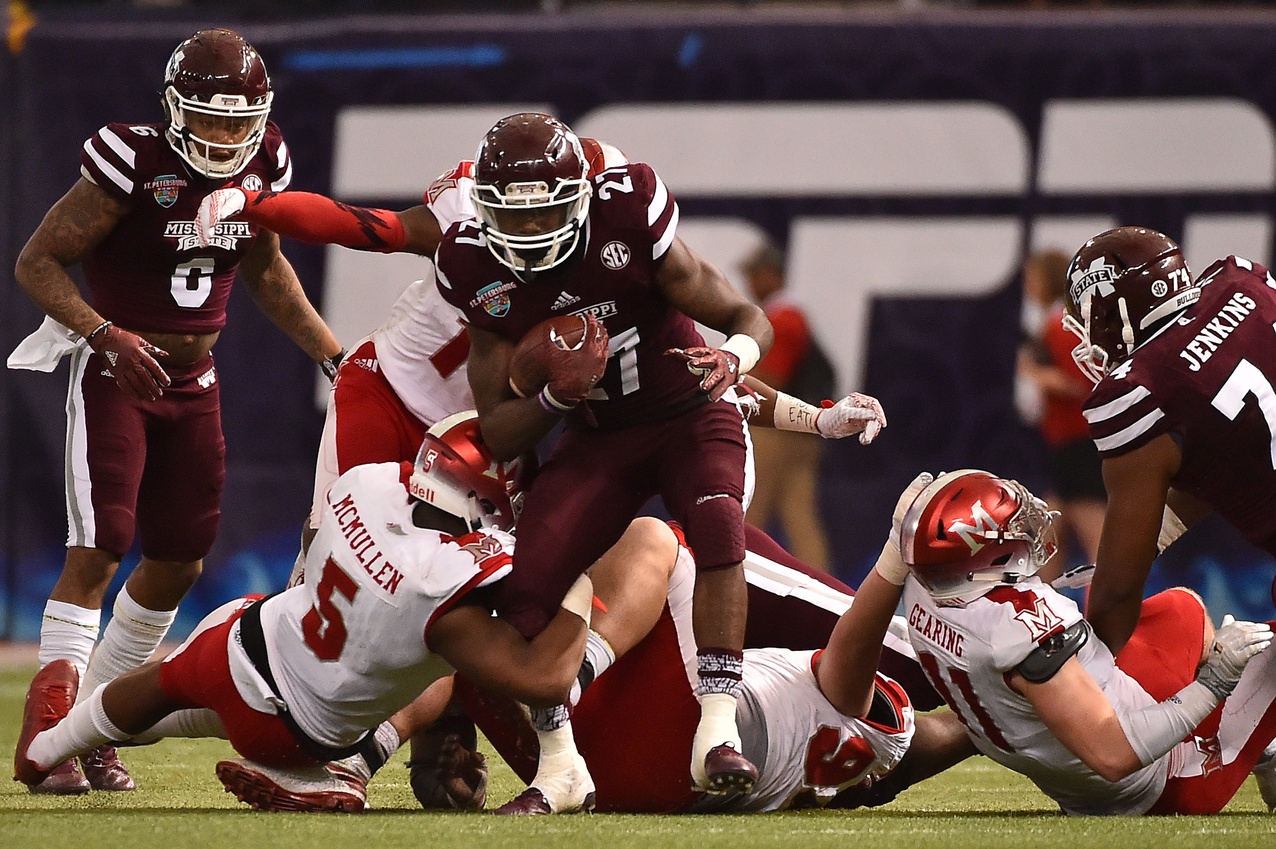 One way or another, the question marks on this team aren’t taking shotgun snaps from center. They’re just about everywhere else.

While Williams (above) had a fine season at the running back position, Fitzgerald is Mullen’s most effective rusher by leaps and bounds. The receiving corps is already a bit lean, even leaner now with primary target Fred Ross out of eligibility.

On the other side of the ball, Richie Brown — the defense’s leading tackler two years running — already has graduated. A.J. Jefferson, one of the more underrated linemen in the SEC, is a senior, too. The secondary was just carved up by seventh-ranked passing attack in the inferior Mid-American Conference. Answers are needed on D.

Yes, the Bulldogs were in most every game and a few bounces away from having a much more respectable record than 6-7.

That being said, the last vision we have of them this season is being a routine 37-yard kick from what would only have been characterized as an unforgivable loss. MSU didn’t look interested for long stretches of this contest.

Take nothing away from the Dogs in victory. As they head back to Starkville, they got to end the year on a high note. They got to send out their seniors — a few that will be missed desperately, no doubt — in style. They got to shut up some critics who said they didn’t belong in a bowl game based on their regular-season performance.

“We found a way to make that final play,” Mullen told reporters after the game.

A taller task for Mullen is finding a way to make Mississippi State relevant again in the SEC. It’ll take more than Adams’ big paw.