There was some wackiness along the way, but in the end the Final Four is almost straight chalk with three 1-seeds and a 2-seed.

In our bid to determine the greatest single-season performance in SEC history, a credible case can be made for each of the four finalists. The winners of the Quarterback, Running Back, Wide Receiver and Defensive Player regions are all worthy.

Three of the four battles in the Elite 8 came down to the wire. Cam Newton barely edged out Johnny Manziel. Amari Cooper survived a serious challenge from Julio Jones. Derrick Thomas won a slugfest with Reggie White. Only Herschel Walker walked away relatively unscathed, as he got three times as many votes as Derrick Henry.

With Newton vs. Walker on one side of the bracket and Cooper vs. Thomas on the other, we have New School vs. Old School. What Newton and Cooper did was historic, but what Walker and Thomas did has truly stood the test of time.

Your vote will determine who moves on to the championship round, so here’s a closer look at the two semi-final matchups.

Prior to arriving at Auburn, Newton was known in the SEC for transferring from Florida right before he was kicked out of school.

But once he showed up on The Plains in 2010 following a one-year stint at Blinn College, the Tigers went from a preseason No. 22 ranking to national champions. Newton was nothing short of unstoppable every step of the way.

As a passer, he connected on 66.1 percent of his throws — dumbed-down scheme or not — for 2,854 yards with 30 touchdowns against only 7 interceptions. And as a runner, he led the league with 1,473 yards and notched 20 more TDs. Newton even caught 2 balls for 42 yards, including one against Ole Miss for a 20-yard score.

Newton accomplished a rare trifecta for a quarterback in going undefeated, winning a national title and claiming the Heisman Trophy. Only Davey O’Brien, Johnny Lujack, Matt Leinart and Jameis Winston have done the same.

Not only did he put together eye-popping statistics, but Newton (below) was also at his best in the biggest and brightest moments.

Walker could’ve won three Heismans, and while he finally did so in 1982, it was ’81 when he rewrote the conference record book.

In 11 games — stats from bowl games didn’t count back then — Walker ran 385 times for 1,891 yards and 18 touchdowns. All three were SEC records at the time. The TD total stood 11 years. Henry only broke the carries and yardage marks in 2015.

That Georgia squad went 10-2 and finished the season No. 6 in the AP Poll after a loss in the Sugar Bowl to Pittsburgh. Unlike Henry, who was surrounded by the top talent in the country, Walker was seemingly the entire team. He had more than twice as many rushing attempts as starting quarterback Buck Belue had passing attempts (188).

Whether it’s Leonard Fournette or any other tailback who manages to mix speed and power into such a terrifying cocktail, he’s always compared to Walker. The UGA legend remains in the conversation for best ball carrier the game has ever seen.

Walker never had fewer than 23 rushes in any game, plus he ran for at least 111 yards and always averaged 4.0 yards per carry or more.

Derek Barnett led the SEC with 13.0 sacks in 2016, and by any reasonable measure he had what can be considered a fantastic year.

Thomas managed to record 27.0 sacks in 1988, more than double Barnett’s output. To put that number into perspective at Alabama, the school’s record for sacks was 11.0 by Emanuel King in 1983 before Thomas came to campus.

He wasn’t just a pure pass rusher, either. Thomas was credited with 39.0 total tackles for loss — no other Crimson Tide defender in history has more than 27.0 in a single campaign. In the Texas A&M game alone, he recorded 7.0 tackles behind the enemy line of scrimmage. That’s another standard not likely to be broken.

Winning the Butkus Award as the nation’s No. 1 linebacker and finishing 10th in the Heisman balloting, Thomas was responsible for weekly carnage in the backfield the likes of which have never seen before or since.

Even if sacks weren’t officially recognized by the NCAA until the 2000 season, Thomas is no less celebrated. 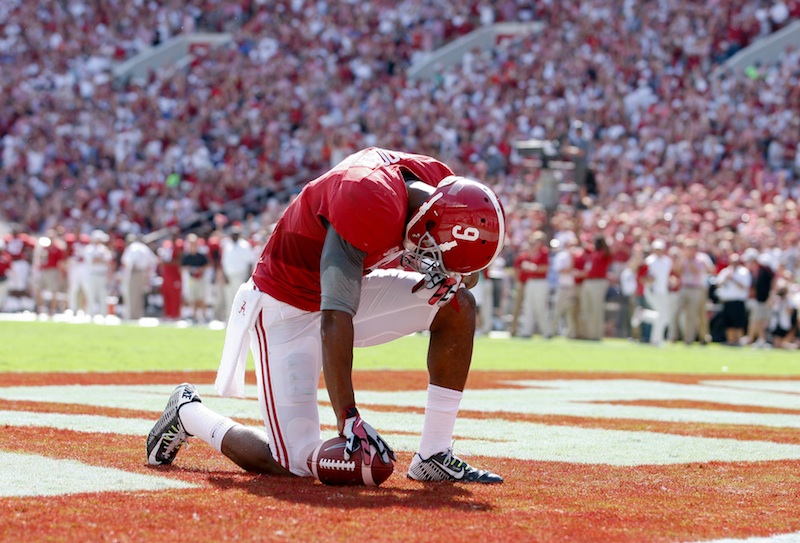 Speaking of ‘Bama, nobody has caught more passes for more yards and more touchdowns at that program than Cooper (above).

In 2014, he set the Tide’s single-season marks for catches (124), yards receiving (1,727) and touchdowns through the air (16). All three figures paced the league by a healthy margin, and Cooper actually led all of America in receptions.

By the way, it’s worth noting that his quarterback was Blake Sims, who went to the Scouting Combine and was (ahem) immediately asked to switch positions once scouts saw him throw. Cooper made Sims so much better than he really was.

What Jones started in Tuscaloosa at the receiver position and Calvin Ridley continues to this day, Cooper perfected it in between.