Some fans are at their wits’ end wondering if anything will change in two weeks when Clemson comes to Williams-Brice Stadium. Others wonder if a drastic change in offensive play-calling or a new coordinator next season will make a difference.

With a week off coming up before the Clemson game on Nov. 30, there will be plenty to discuss about short- and long-term solutions for the program.

In the meantime, the Gamecocks appear to be adopting a nothing-to-lose mantra as they aim to shock a second team that’s in contention for the College Football Playoff.

“Like Coach (Will) Muschamp said, we can right a lot of wrongs by beating Clemson,” cornerback Jaycee Horn said, according to Josh Kendall of The Athletic. “We have to go back to the drawing board and give it our all one last time.”

“I wouldn’t say it’s easy, but it’s something you have to do,” linebacker Ernest Jones said about blocking out outside noise. “We see all the stuff people say about us, and we just have to let it go. This is what comes with playing SEC football. The fans we’ve got, they want to see results, and we understand.”

Added tight end Kyle Markway, “It’s on Twitter. We see it. We follow you guys. We know what’s going on, but we don’t let it affect us. We support (Muschamp) and he supports us.”

Support seems to be in long supply between athletic director Ray Tanner and school president Robert Caslen. Muschamp doubled down on a comment he made last week, when he noted that his staff has won more games in three years than any other in program history. He said the support from the administration has not changed, and he appreciates it. He doesn’t see the public criticism, however. 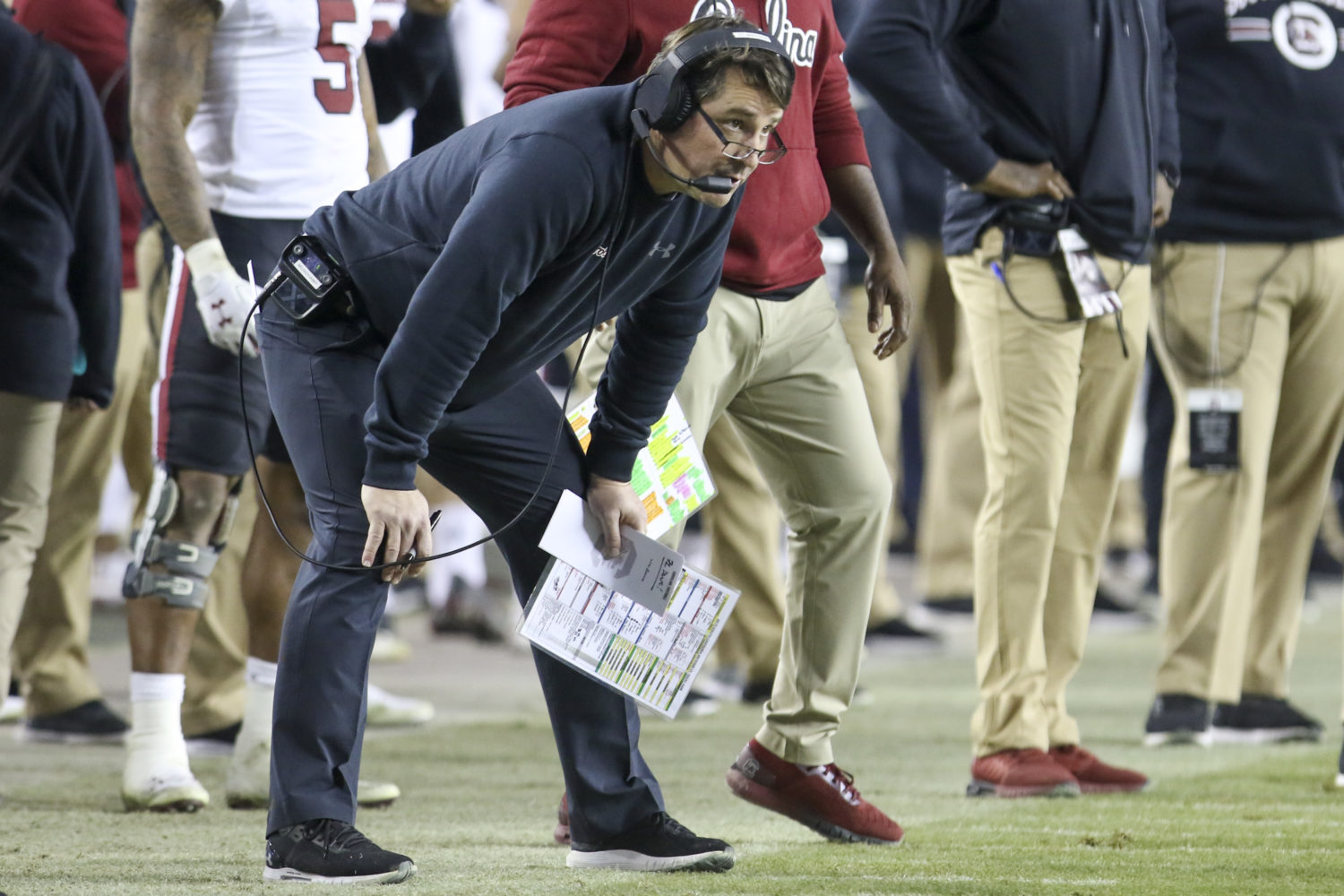 Will Muschamp appears to have the support of the school administration despite a disappointing season. Photo by: John Glaser-USA TODAY Sports

That support, though, hasn’t translated to results on the field.

Entering Saturday, South Carolina was second-to-last in the SEC in third-down conversions at just 33.7 percent. The Gamecocks were 4-for-18 against App State, and on Saturday at Texas A&M, they were 2-for-15. Similarly, the Gamecocks had 45 rushing yards on 17 attempts against the Aggies, a week after gaining 21 yards on 27 attempts.

“We just can’t get anything mustered up offensively,” Muschamp said of the lost confidence, according to SportsTalkSC. “We can’t get anything going in the run game. We’re having a hard time piecing anything together offensively. We felt good about the run game. We knew (Aggies defensive lineman Justin) Madubuike and those guys were good. We’ve had a hard time blocking them the last two years. … We’re having a hard time creating anything explosive and getting people off of us. So it’s very difficult right now.”

The frustration manifests on the sideline. Muschamp said that not only does he feel it with the offense, but it spreads around the team.

“When you’re not able to produce and put yourself in a position, then guys start trying to make plays instead of just doing their job,” he said. “And that happens on both sides of the ball.”

Muschamp said he has been on staffs that have won national championships and multiple conference championships, and he plans on taking this program where it has never been before.

“We have done some good things,” he said. “We’ve had a very rough year, and that’s frustrating, it’s frustrating for us all. … We’re not as far off as people seem to think we are, and that’s the most frustrating part for us. You get into a rut from a confidence standpoint, which is kind of where we are right now, it snowballs on you and it’s been unfortunate.”