Underdog Fantasy Promo Code and How To Play 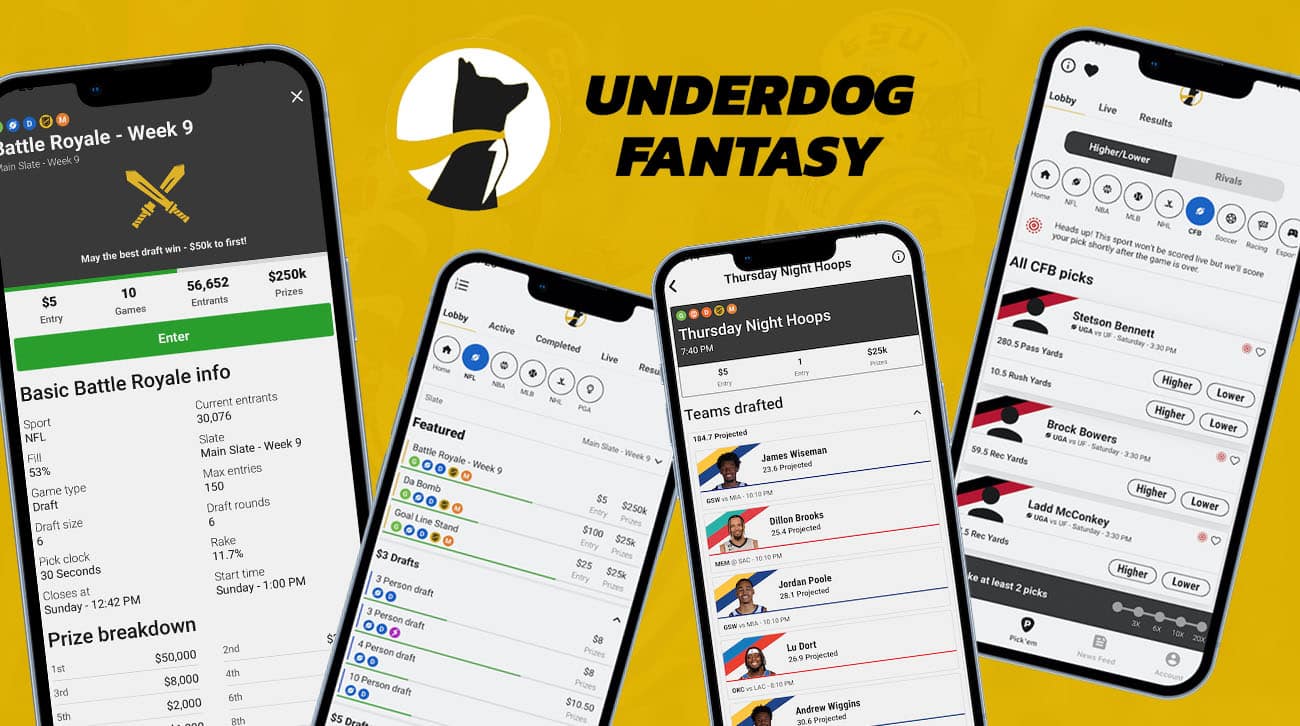 This isn’t your daddy’s version of fantasy sports. Daily Fantasy Sports (DFS) may have been launched into the mainstream by operators such as FanDuel and DraftKings in the 2010s, but even DFS has evolved since then and operators such as Underdog Fantasy are at the forefront of this move.

In this page, we’ll go through what it means to play DFS today, what states and where you can play this (almost everywhere!) and look at an Underdog Fantasy promo code you can use to make sure you maximize the value when you signup and start playing. This Underdog promo code is worth $100 of value, so you’ll want to follow carefully here.

Using our exclusive promo code SOUTH will unlock the best sign-up offer that Underdog has available: A full deposit match up to $100 worth of value.

All you have to do is signup at Underdog and make your first deposit. Underdog will match the deposit money 100% up to $100.

How to get started:

Why we love Underdog Fantasy here at SDS

But, we can have a ton of fun and scratch that competitive itch by playing Underdog Fantasy and making picks around college football games. Underdog Fantasy is available and legal in all SEC football states except Louisiana. Yep, that means all of those big states such as Georgia, Florida, Alabama, South Carolina, Missisippi, etc. can all have a ton of fun playing for real money on college football picks on Underdog Fantasy. Tennessee folks, well, you’re just lucky as you have the ability to do legal sports betting and daily fantasy, both.

What does it look like to play Underdog Fantasy in relation to college football games? I’m glad you asked! Let’s get into it.

The Types of Games and Contests on Underdog

Underdog offers fairly standard Daily Fantasy offerings where users can quickly draft a fantasy lineup and compete against other users during a day of football or a night of NBA action.

The Battle Royale format has some important qualities that make it fun and more exciting than a standard fantasy contest. When you enter the Battle Royale contest, you will participate in a snake draft against a group of other users, usually anywhere from six to 12 users. But, you won’t just compete against the group you are drafting against. You’re competing against every user in every group for that given period of time.

For example, my first Battle Royale draft was for a night of Thursday night NBA action. We had to pick six players in a snake draft, and there were six users in our draft. The difference here is that I’m not just battling six users. I’m battling over 5,000 entrants into this contest, and at $5 entry per user, there’s a lot of prize money at stake. In fact, the first place winner gets $5,000. Top 10 finishers all make over $150 in prize money and over 500 top finishers make at least $10. The next 500 or so get their money back. So, it’s pretty hard to make BIG money, but it’s not crazy hard to make a little money. Fun, right?

Here are some screengrabs from my first NBA contest on Underdog: 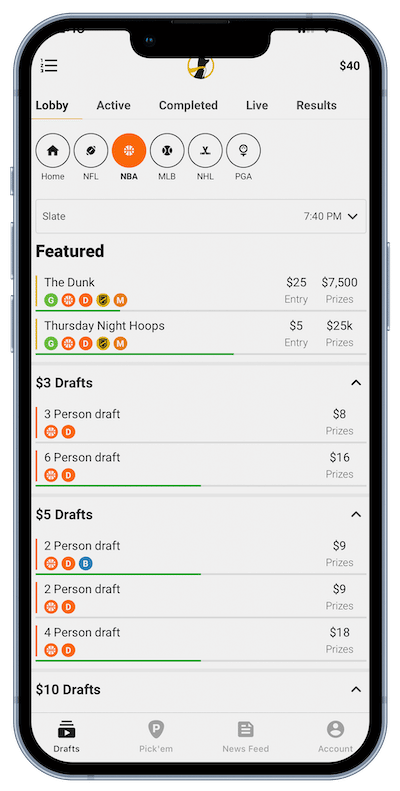 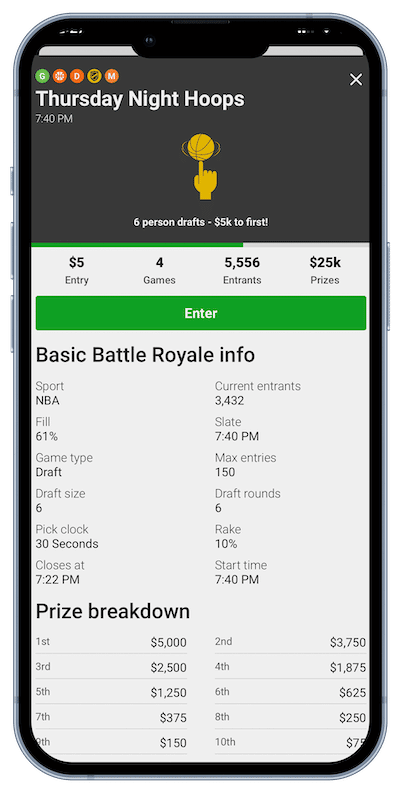 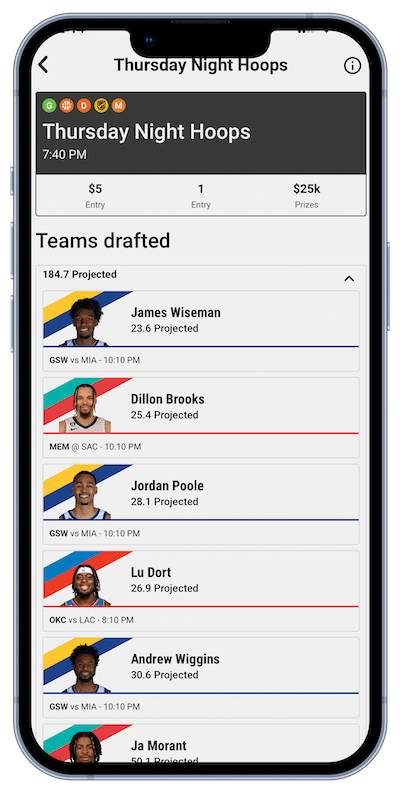 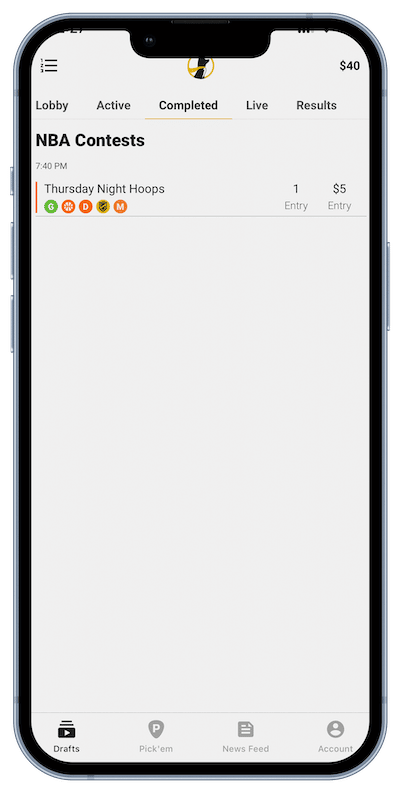 One of the interesting notes here is that there were only four NBA games on this Thursday night, so you might be surprised at some of the players you start drafting. Also, you’re drafting multiple people from the same team. Perhaps this makes it more fun, because now you can watch a game potentially with multiple players that will impact your ability to win some cash.

Where Battle Royale drafts are daily fantasy drafts where you compete against a much larger group of individuals for the chance at higher dollar amounts, Underdog Fantasy also offers a number of more standard daily fantasy drafts where you compete against just a handful of people. In fact, I did a number of head-to-head NBA drafts. A head-to-head draft gives you the chance to basically double your entry money (minus approximately 10% rake). So, if it’s a $25 entry, you can win something like $45 if you win. If you lose, you get nothing.

To get to know the Underdog regular fantasy draft, I participated in some head-to-head NBA contests. In these contests, I went back and forth with my opponent in drafting six NBA players for the night’s action. Each of us picked six NBA players. It takes only a couple minutes.

As I played a few of these contests, the only thing that gets a little repetitive is the fact that you’re kind of selecting the same players over and over. Think about it… with only two teams with six players each, that’s 12 players. So, essentially every contest involves teams that have a mix of mostly the same players: Luka Doncic, Lebron James, Giannis, etc. Depending on who has the better night a bit randomly, that will determine the winner. Because you never go beyond an obvious group of top NBA players, you don’t really have a chance to demonstrate any deeper knowledge. In football, you have more variance with the output of top players and can lean more into the matchups, so I see this as less of an issue on NFL daily fantasy in this kind of format. But, I like NBA because there is nearly nightly action.

With that said, it’s still super fun to have some stakes involved in the nightly NBA action. You can likely take your gameplay to the next level by layering in some knowledge and data around the weakest defensive teams, which teams might get cooked regularly by a dynamic, scoring guard, etc. And consider the teams that rebound really poorly. This might help you beef up your rebounding stats.

All in all, these contests are incredibly simple, super easy to get started with, and definitely a great way to dip your toes in the water of daily fantasy.

As I was getting used to the Underdog platform, I entered a daily fantasy two player NBA matchup. I sat there for a minute and nobody entered the contest. So I left, and joined another. Nobody entered for a minute, and so I left again, and shut the app off. A few minutes later, I got a notification from Underdog that my draft was about to start! I didn’t realize that once you enter, you’re in, even if you leave. So I completed the draft. Then I got another notification saying my draft was about to start! If you remember, I entered two drafts casually and left both. Well, I was locked into both. So without realizing it, I had committed to two NBA drafts for the same day. Be aware that if you enter the contest, you’re in.

As someone who kind of exited the daily fantasy space a few years ago after the big wave, it’s the pick’em contests that pulled me back in to Underdog Fantasy. These contests are quite similar to prop bets, and more closely resemble actual sports betting than anything else in fantasy.

There are two types of pick’em contests on Underdog Fantasy. Higher/lower pick’ems (which resemble over/under player prop bets in sports betting) and Rivals. Regardless of the type, you have to combine at least two picks and as many as five. The more you combine, the higher the multiplier or potential payout. 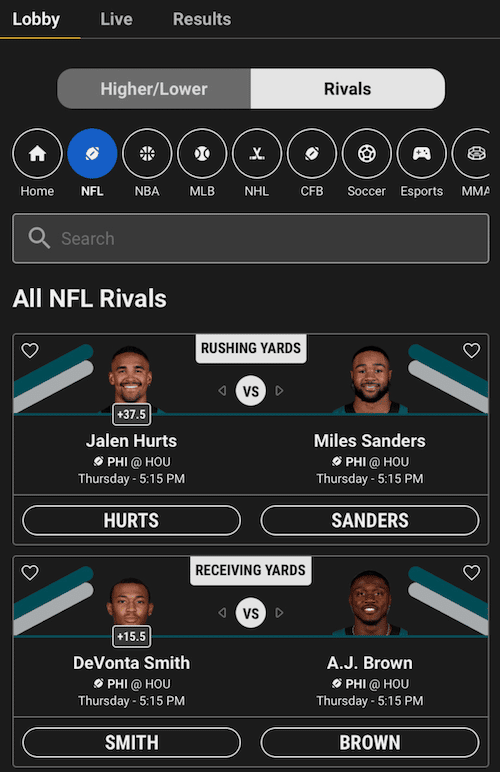 On higher/lower pick’ems, you are making a pick on an individual player and whether they will go over or under a specific stat total. For example, you might pick that Lebron James will score over or under 28.5 points against the Clippers in tonight’s game.

Scroll down to see more screenshots around higher/lower picks across a variety of sports on the Underdog platform.

In Rivals picks, you make a pick between two players around a specific stat category with a “spread” applied to one of them to even out the odds a bit. In the screenshot to the right, you can see you are picking between Jalen Hurts +37.5 rushing yards vs. his teammate Miles Sanders. If you pick Hurts, you think he’s going to rush for at least 37.5 more yards than Sanders.

How much can you win? Here are how the multipliers work on the Underdog Pick’em contests:

Curious what this looks like? Here are some screenshots on picking higher/lowers on Underdog across NFL, NBA, MLB and even college football. 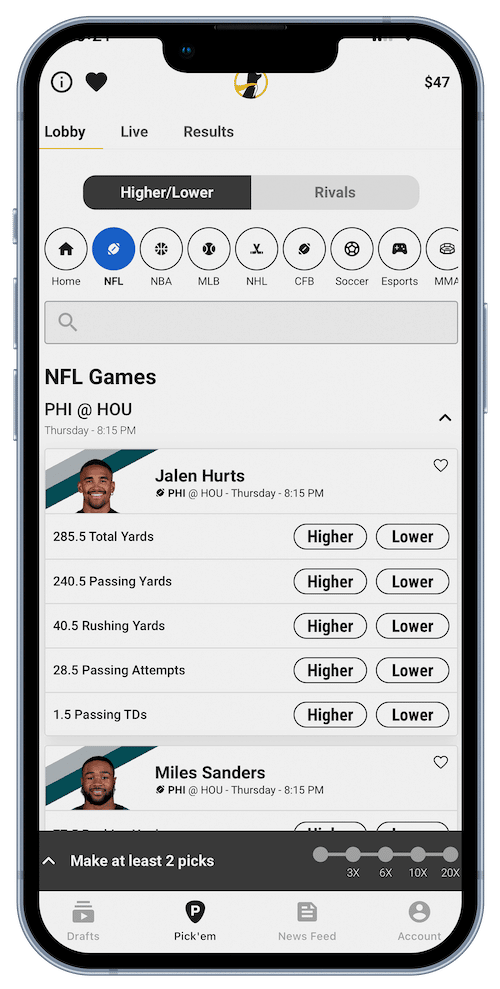 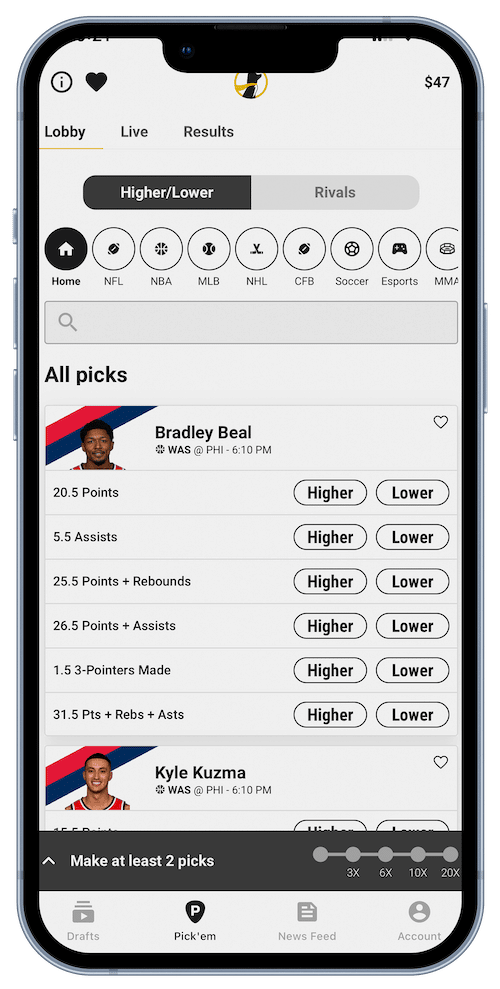 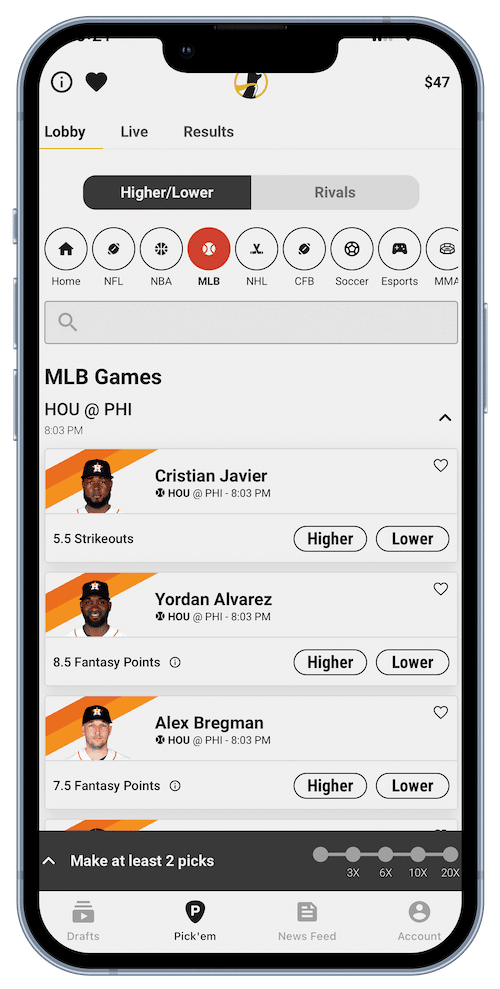 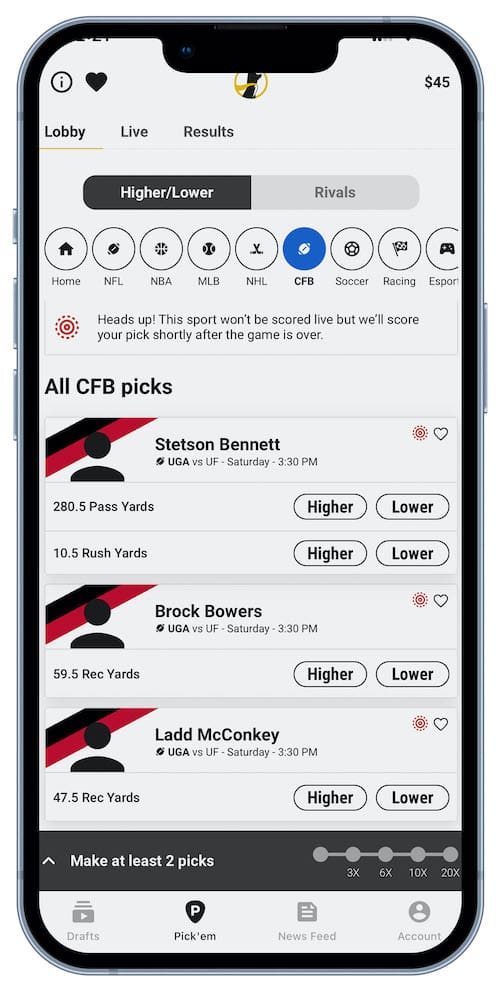 The interface is really nice. Although, I’d like to see headshots on the college football pick’ems soon! New users can navigate this pretty easily. You make your pick, you see the multiplier indicator at the bottom light up which indicates how many picks you’ve made and how much money you can win. Pretty simple stuff.

One of the reasons we love Underdog Fantasy and are passionate about our own Underdog promo code for our users is because this type of action is live and legal in many of the college football states where sports betting is not legal. As you consider getting in on the action for your favorite college football team, here are some specific notes to be aware of with regards to college football on the Underdog platform.

Register your account today at Underdog and take advantage of the 100% deposit match up to $100.