Unless those were both false-positive tests, this means Saban won’t be able to coach Alabama’s game against Georgia on Saturday (assuming the players are healthy and don’t test positive themselves).

In a released statement, Saban revealed that OC Steve Sarkisian would be the acting head coach during his absence: 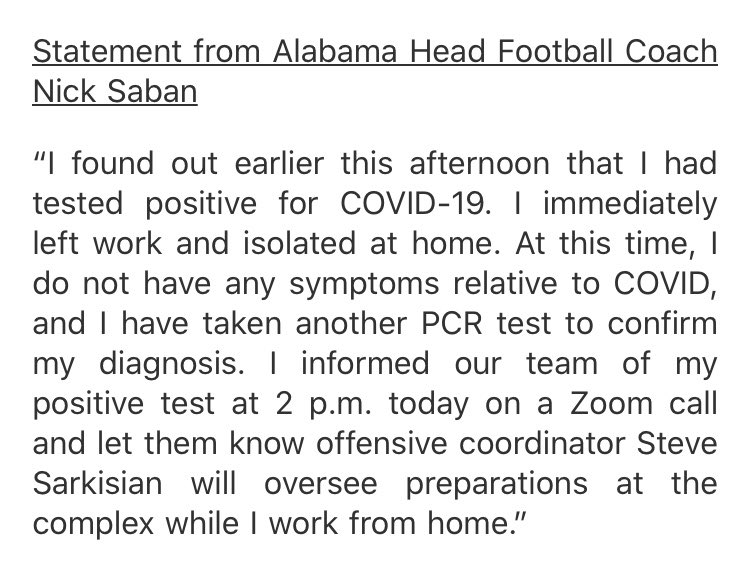 He has served as Alabama’s offensive coordinator since last season. His first test will be huge this weekend, as Georgia visits Tuscaloosa.

TRENDING
547,922 READS
So long Gus? Auburn fans want to hire controversial former SEC head coach
192,212 READS
Social media calling out Gary Danielson for CBS broadcast of Georgia at Alabama
142,826 READS
Nick Saban dances in locker room as Alabama players go wild following win over UGA
LATEST NEWS
View All
28 minutes ago
What Jeremy Pruitt said about Alabama ahead of Saturday's rivalry game
29 minutes ago
4 things that Nick Saban said about Tennessee
50 minutes ago
Nick Saban says he's excited to see Tua Tagovailoa in the NFL: 'Most guys don't have to go through what Tua went through'
59 minutes ago
Ed Orgeron shares the latest update on Myles Brennan: 'I don't know if he's going to play in this game'
1 hour ago
Lane Kiffin on Matt Corral's struggles vs. Arkansas: 'You have to learn from it and redo it'
1 hour ago
Back to himself? Nick Saban says Dylan Moses played his 'best game' vs. Georgia
VIEW MORE

RECENT ARTICLES
ALABAMA
4 things that Nick Saban said about Tennessee
ALABAMA
Nick Saban says he's excited to see Tua Tagovailoa in the NFL: 'Most guys don't have to go through what Tua went through'
ALABAMA
Back to himself? Nick Saban says Dylan Moses played his 'best game' vs. Georgia
ALABAMA
Tua Tagovailoa reflects on journey to make it on an NFL field via Instagram post
PRESENTED BY

SEC
Monday Down South: Alabama's plug-n-play offense defies gravity
Monday
Down South
SEC
Week 4 SEC Primer: The Tide's game has changed, but the stakes for Alabama-Georgia remain the same
SEC
SEC QB Power Rankings, Week 4: Yes, it's past time to believe in Mac Jones, even with Georgia on the way
SEC
Monday Down South: Welcome to the new SEC, where It Just Means More Offense
HOMEGATING KIT
FROM