Arch Manning is the top player in the 2023 recruiting class, as you’d expect from the grandson of Archie Manning, son of Cooper Manning and nephew of Peyton and Eli Manning.

His recruitment has been a closely followed affair, even if the Manning family hasn’t said much publicly about it. Even so, 3 major schools are reportedly in the lead for Arch’s commitment — Alabama, Georgia and Texas.

Over the weekend, Arch visited Tuscaloosa. As you can see below, he donned some Alabama gear (much like he did during his recent visit to Georgia). This picture is via 4-star 2023 OL Olaus Alinen’s Instagram story: 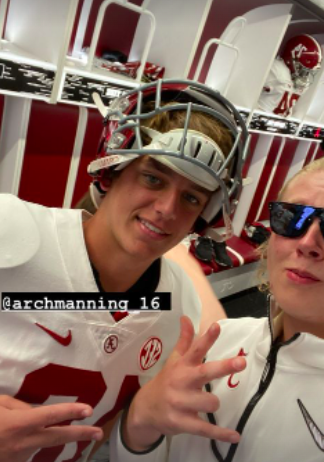 Alabama also recently landed a commitment from 4-star 2023 QB Eli Holstein out of Louisiana, but many expect the Tide to say involved with Arch, as well.

Manning faces a big decision on where he’ll play his college ball, and he’s taking his time to ensure he makes the right one.