If Clemson has one edge over Alabama in the College Football Playoff National Championship Game, it’s at the quarterback position.

Despite the fact that Jalen Hurts of the Crimson Tide is the SEC’s Offensive Player of the Year, he’s got a long way to go before he’s Deshaun Watson of the Tigers. Watson may be the most dynamic playmaker in the country.

Don’t get me wrong. Hurts has been fantastic this season more often than not and brought an element to the ‘Bama offense we haven’t seen before, at least not during the Nick Saban era. With a total of 34 touchdowns to his credit — 22 through the air, 12 more on the ground — it’s hard to believe that he’s only a true freshman.

Nevertheless, there have been a few chinks in his armor lately. His last two times out, he hasn’t thrown the ball particularly well.

Against Florida in the SEC Championship Game, Hurts was only 11-of-20 passing for 138 yards with 1 TD and 0 interceptions. Four weeks later in the Peach Bowl facing Washington, he was just 7-of-14 for 57 yards with no scores or INTs.

It’s difficult to know how much of the blame for the Tide’s declining aerial attack deserves to be handed to Hurts. Has he hit the proverbial rookie wall? Or has the drama regarding his offensive coordinator — Lane Kiffin is suddenly out, Steve Sarkisian is unexpectedly in — made it harder for everyone to get on the same page?

A former five-star recruit billed as Henry 2.0 at the beginning of the year, Scarbrough (below) actually finished the regular season fourth on the team in rushing behind Hurts and two other running backs, Damien Harris and Joshua Jacobs. 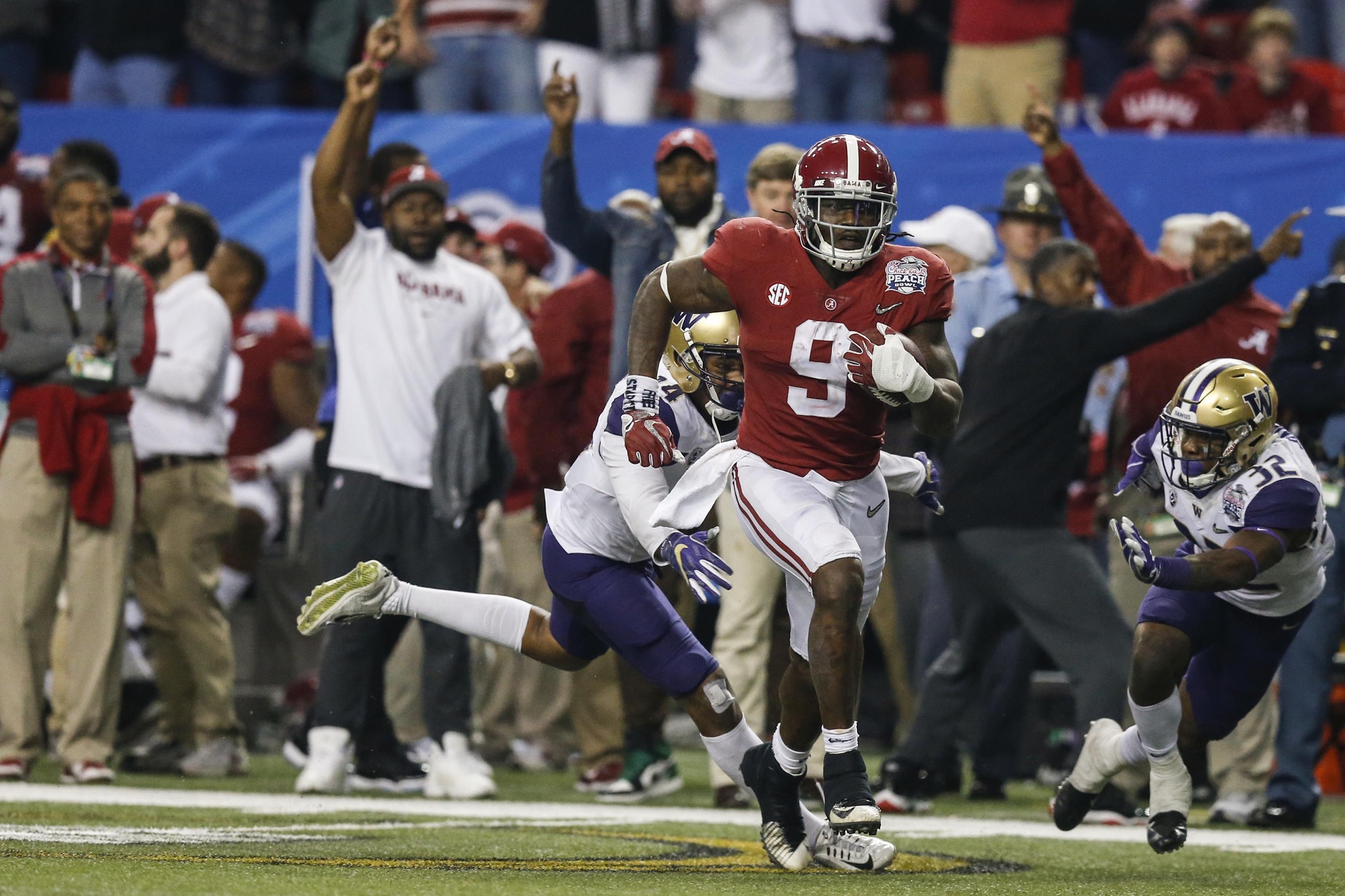 Battling injuries — his list of ailments dating back to high school is too lengthy to list here — and ineffectiveness, Scarbrough was relegated to third-string duty behind Harris and Jacobs for a good portion of the schedule. However, in the national semifinal, his bruising style was too much for the Huskies defensively.

With an Alabama bowl record 180 yards and 2 touchdowns on the ground, Scarbrough finally delivered on all that promise.

He could be the key player Monday in Tampa. If Clemson can find a way to eliminate Scarbrough and the rest of the Crimson Tide running game, then Hurts will be forced to make more plays with his arm. He’s struggled to do so lately.

But if Scarbrough in any way resembles the runaway freight train we saw New Year’s Eve in Atlanta, then it’s difficult to make a case for the Tigers winning. Not only will the pressure be taken off of Hurts, but Watson can’t do any damage — remember, he threw for 405 yards against ‘Bama last January — watching from the sideline.

Clemson doesn’t have the Tide’s rushing defense, but allowing a paltry 3.5 yards per carry through 14 games is more than respectable.

“He’s a very good player,” Tigers defensive end Clelin Ferrell said Tuesday via conference call. “He’s definitely a big back. They have Damien Harris back there, as well, who can play. He’s a little bit smaller. He’s like a bowling ball back there.”

“Clemson has a very great defense,” Scarbrough said on the same conference call. “I think they have a great front seven, and we’re going to have to run the ball effectively and open up some stuff for our receivers.”

Even if Alabama is more of a read-option offense these days, Scarbrough is a bit of a throwback and runs downhill with purpose. 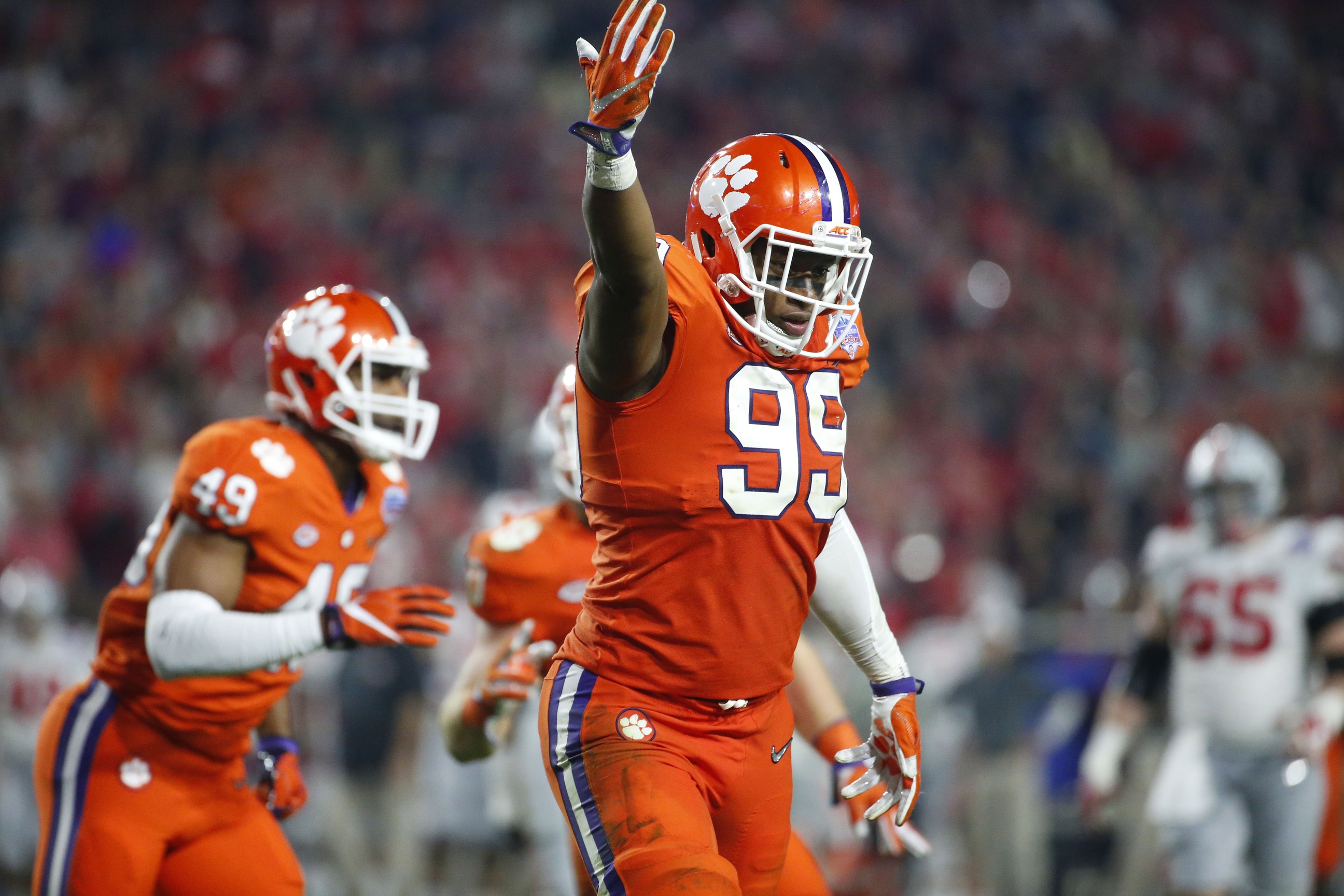 “You know Alabama,” Ferrell (above) said. “You know those are big, physical guys who can run very well. It’s kind of crazy to see the monster sets that a guy like Scarbrough has had over the last couple games. He looks like he’s came ready to play.”

Scarbrough didn’t get a carry in last year’s CFP title game, but he still learned something watching Henry run it an incredible 36 times.

“It was a blessing to see him work like that,” Scarbrough said. “Most people don’t get a chance to see things like that, and (it) makes you want to change the mentality and work as hard as he did.”

It may have taken a while for Scarbrough to become the primary back in Tuscaloosa, but it’s not like the Tigers had never heard of him.

“He came onto the scene,” Ferrell said. “I heard about a couple of injuries that he’s had in his past. He seems like he’s a guy who just bounces back and is playing very well right now. He’s someone we’re definitely going to be ready for.”

While most players are dealing with some sort of health issue this late in the year, he is only now feeling like himself again.

“I probably was healthy, probably the seventh or eighth game of the season, and I was reinjured during the Auburn game,” Scarbrough said. “And I just felt good. I just felt great. I’m 100 percent.”

Like Henry, Scarbrough tends to be at his best in the second half. At 6-foot-2 and 228 pounds, he’s increasingly tougher to tackle.

“We have to bring our hard hats,” Ferrell said. “He obviously can bring the noise when he runs the ball. He’s a very hard runner. He’s one of the guys we’re going to have to gang-tackle him, just focus on getting hands on him and not arm-tackle him in this game because he’s a very good player.”

Clemson has the formula necessary to frustrate Hurts. But if Scarbrough continues to run wild, no team has an antidote for that.