Decade of Dominance: SEC never had a 10-year run like Nick Saban at Alabama

If you want to know what history looks like, check out the college football program in Tuscaloosa. It’s being made as we live and breathe.

In his 10th season at Alabama, coach Nick Saban is presently putting the finishing touches on a decade of dominance the likes of which the SEC has never seen. The separation that exists now between the Crimson Tide and the rest of the conference is stunning.

‘Bama just filleted Florida in the league title game 54-16 — an argument can be made that the Tide didn’t even play that well — this past Saturday. It was Saban’s fifth SEC championship and third in a row, despite the fact that he resides in the West, which is considered the deepest and most dangerous division in the country.

The final rankings for the College Football Playoff were released last Sunday, and they were ripe for debate from coast to coast.

Clemson got in with a home loss to unranked Pittsburgh on its résumé. Ohio State got in watching the Big Ten Championship Game from a couch in Columbus. Washington got in after playing by far the weakest non-conference schedule among contenders.

While all the aforementioned teams have warts of various shapes and sizes, Alabama is essentially fielding a flawless club — both in terms of the on-the-field product and what it’s accomplished up until this point. The offense is dynamic. The defense is suffocating. The special teams are sound. The coaching is the best in the land, too.

The lone undefeated squad left standing in the Power 5, the Crimson Tide are a unanimous No. 1 in both major polls and the CFP rankings.

If ‘Bama is indeed better than ever in 2016, that’s a scary proposition for the rest of the nation. The Tide have already won four of the last seven national titles and are odds-on favorites to make it five out of eight.

Since Saban first set up shop in the 205, only five other schools have won it all: LSU, Florida, Auburn, Florida State and Ohio State. Each — Auburn in particular — experienced some degree of dropoff the season after, sometimes longer. The Tide, however, have essentially been in the hunt until at least November every year since 2008.

Even if Saban doesn’t get “one for the thumb” in January, the SEC has never witnessed a 10-year run like this from any of its member institutions. 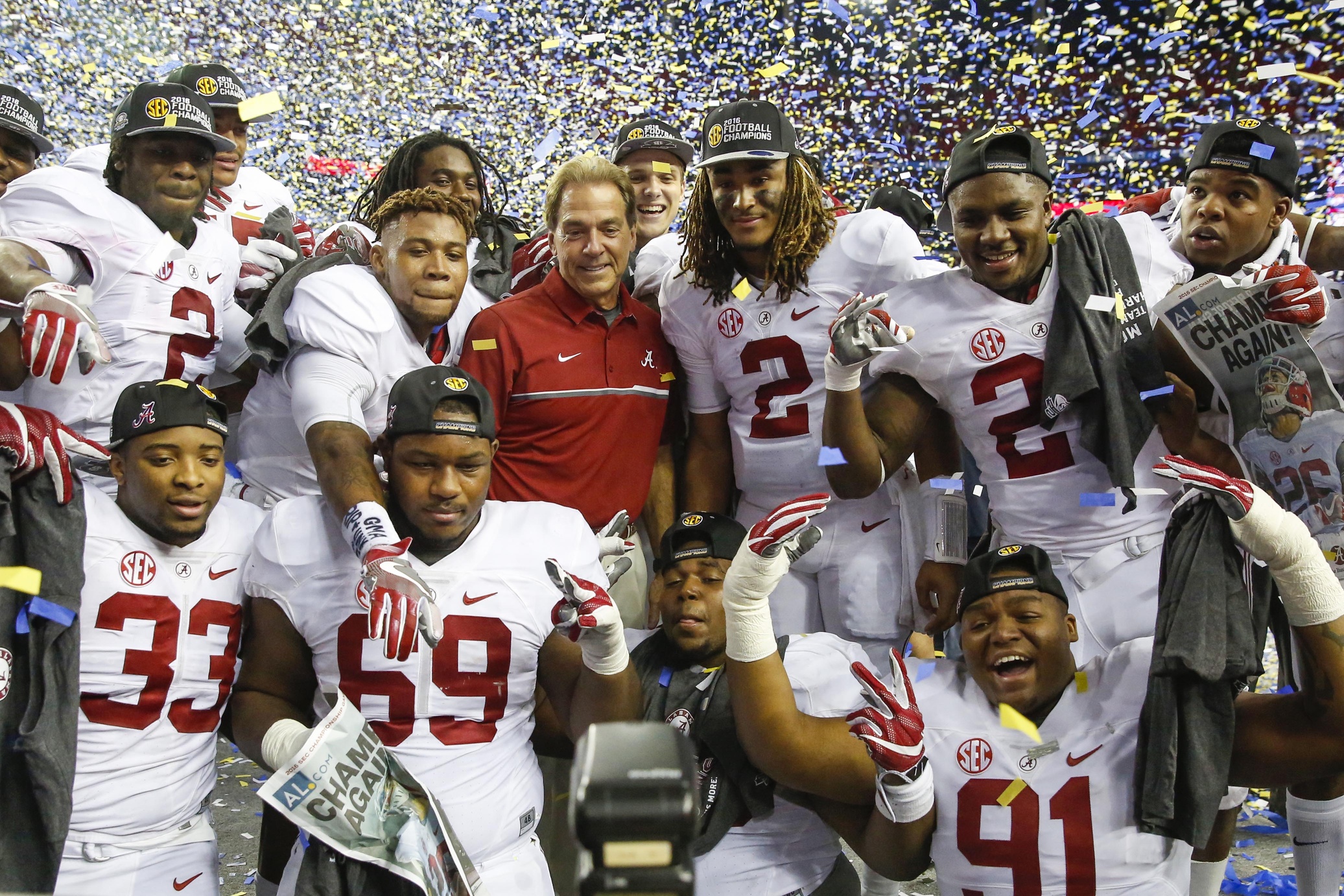 While Saban has won four national championships in Tuscaloosa, Bryant won six. Under his direction, ‘Bama was dominant in the 1960s with four SEC titles and three national titles. But in the ’70s, a dominant program became dynastic.

He managed to capture the league again in 1981, but 1979 was the last time Bryant made it all the way to the top of the mountain.

Bryant produced a total of eight consensus All-Americans over the course of this 10-year snapshot, including future Pro Football Hall of Fame inductees John Hannah and Ozzie Newsome. Both are among the true greats at Alabama.

Obviously, the college football landscape is much different now than it was during Bryant’s heyday. As recently as 1972 — the first season freshmen were eligible to play — there were no limitations on the number of scholarships schools could hand out to athletes. It wasn’t uncommon for Bryant to have 150 kids or so getting a free ride.

Therefore, it was easier for the elite programs to hoard the premier prospects. Parity didn’t become part of the game until 1973.

But even then, Bryant had 105 scholarships at his disposal. That’s 24-percent more than Saban has nowadays when filling out his roster. The limit was cut again to 95 in 1978, right about the time Bryant was wrapping up his most fruitful decade.

It’s also worth noting that the SEC only had 10 teams at the time. Georgia Tech and Tulane left — schools actually left this conference once upon a time — for independent status in 1964 and 1966, respectively. In ’92, the arrival of Arkansas and South Carolina coincided with divisional play. Then Missouri and Texas A&M came aboard in 2012.

Nobody’s questioning Bryant’s legacy. Still, it’s simply a fact that he had more players and less competition to acquire them. 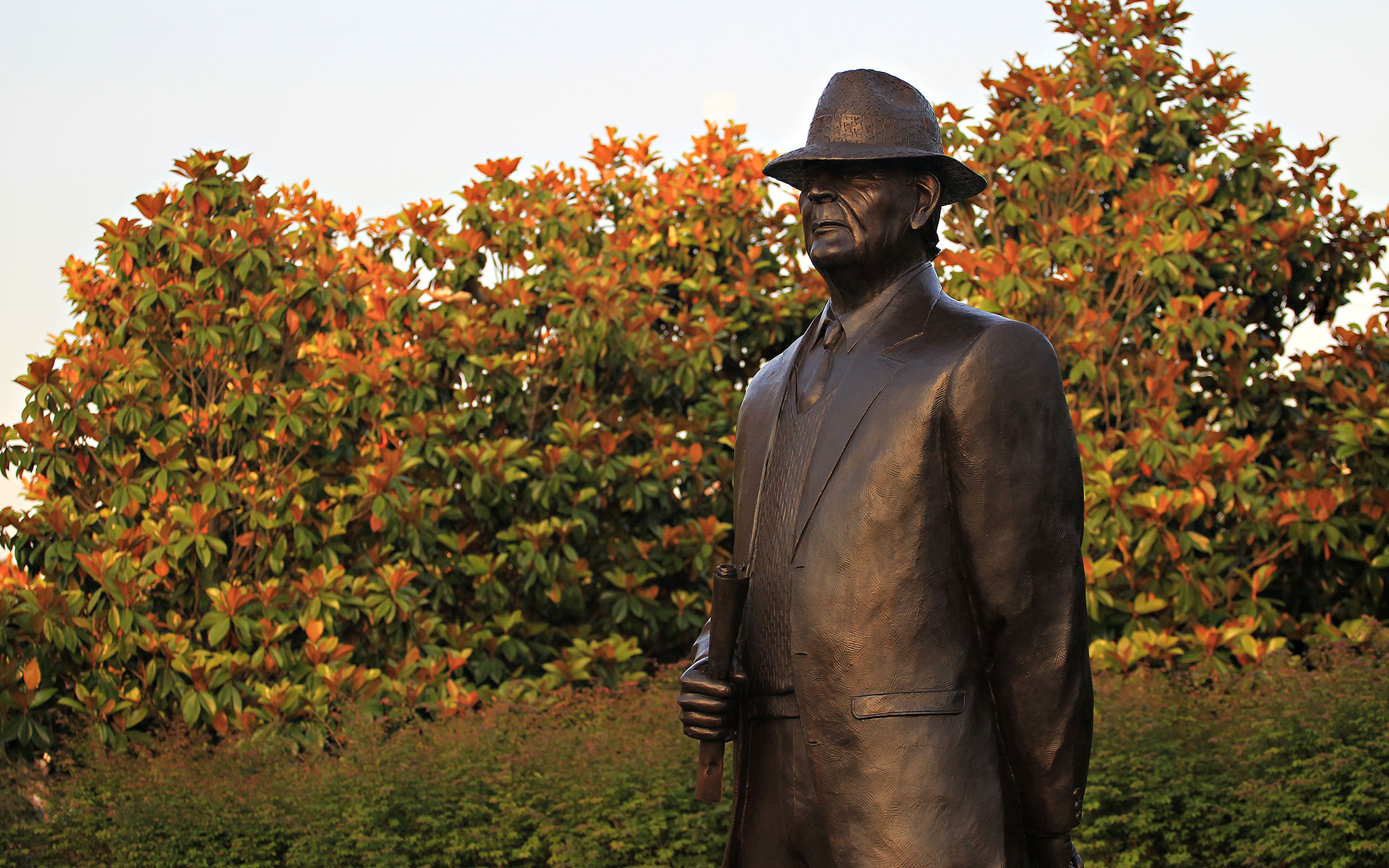 Back in 1989, the year before Spurrier returned to his alma mater, LSU’s Tommy Hodson was the SEC’s leading passer with 2,655 yards.

Throughout history, and especially in the ’80s, this conference had been all about the ground game. During that decade, Georgia’s Herschel Walker, Auburn’s Bo Jackson and Florida’s own, Emmitt Smith, led the league in rushing a combined seven times.

However, Spurrier turned the SEC upside down with his potent passing attack, which eventually came to be known as the Fun-n-Gun. Shane Matthews averaged 3,096 yards — pedestrian by today’s standards, but a bunch back then — through the air from 1990-92 and topped the conference all three seasons. The league would never be the same.

Once eventual Heisman Trophy winner Danny Wuerffel entered the huddle, the Gators became arguably the most feared offense in the country.

UF didn’t just sling the ball all over the yard like a family Turkey Bowl on Thanksgiving Day. Spurrier also won, a lot. The first five division titles in East annals went to Florida. Four of them were followed by a win in the league championship game.

While Alabama has 16 national titles — and claims something like 84 more — the Gators have three. The first came in 1996, with Wuerffel at the controls and Spurrier pulling the levers behind the curtain. They avenged a 24-21 loss to Florida State in the regular-season finale by smashing the Seminoles 52-20 in a Sugar Bowl rematch.

While Spurrier may have toyed with the SEC, he was only able to become king of the hill nationally once. It was FSU and Nebraska winning multiple rings in that age, with one for the Cornhuskers (1995) coming at UF’s expense 62-24.

Not too long ago, read-option systems were considered revolutionary. Now, they’re ubiquitous. The same can be said of Spurrier’s influence on the conference. Because he had so much success throwing the ball, the rest of the league — Peyton Manning at Tennessee, for example — followed suit. But somebody had to be the first.

Even if Spurrier’s legend is secure in the SEC, he didn’t win to the degree that Bryant did before him or Saban would after. 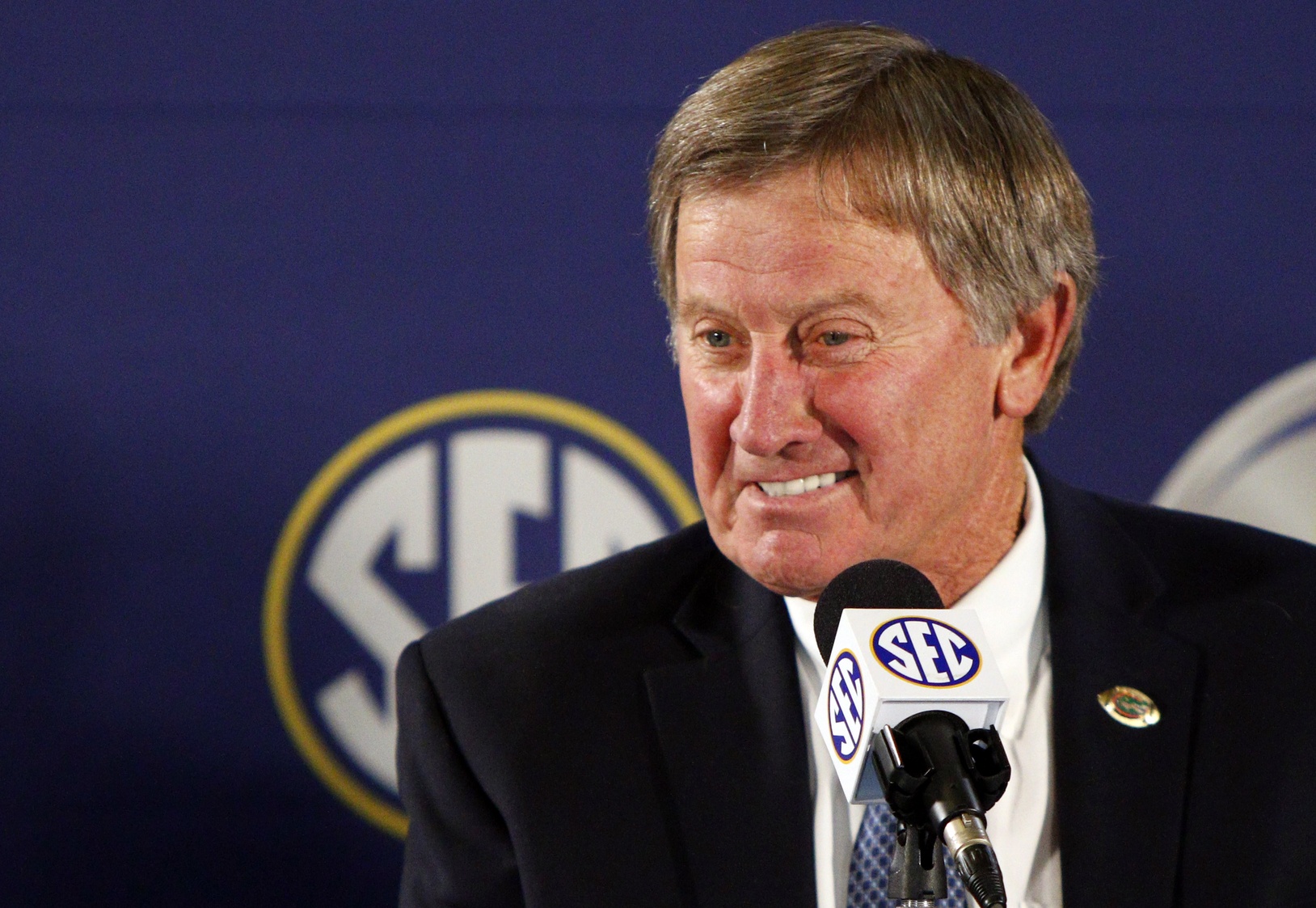 * could become 5 in January

In 2006, the year before Saban took over, the Crimson Tide were 6-7, never entered the AP poll and finished the season on a four-game losing streak.

By 2008, just Saban’s second campaign, they were 12-0, No. 1 in the country and champions of the West. Despite the fact that Florida ultimately knocked them off in the SEC title game, a statement had been made: ‘Bama was back.

The Tide got their revenge in 2009, again running through the regular season with an unblemished record before beating up on the Gators — extracting tears from Tim Tebow in the process — 31-13 in the conference championship game. After taking out Texas, Saban delivered a national title to Tuscaloosa for the first time since 1992.

Urban Meyer’s mini dynasty at UF was officially over. He left the program a year later. Big Al has been trampling the rest of the league ever since.

Only a couple of Auburn miracles prevented two more SEC championships for Alabama. In 2010, soon-to-be No. 1 pick Cam Newton engineered the biggest comeback in Tigers history. In 2013, the Kick Six shook the college football world.

As for 2011, while the Crimson Tide may not have captured the conference, they did win the national title. In the Game of the Century at Bryant-Denny Stadium, LSU survived a battle of field goals — dastardly defense, too — 9-6. But rematched two months later in the BCS Championship Game, ‘Bama shut out the Bayou Bengals 21-0.

The smallest window of time it ever took Bryant to get four national championships was 13 seasons. Saban has taken four of the last seven.

A total of 22 consensus All-Americans have suited up for the Tide on his watch, which is more than Bryant and Spurrier combined during their respective streaks. The program’s first Heisman winners, Mark Ingram and Derrick Henry, are included.

In terms of winning the SEC in a decade’s time, Saban’s five trails Bryant’s eight and Spurrier’s six. Still, if the ultimate measuring stick is being the best of the best, then Saban’s 10-year reign — not his best 10 years, remember, which is what we’re cherry-picking for the other two — is superior to both Bryant and Spurrier. 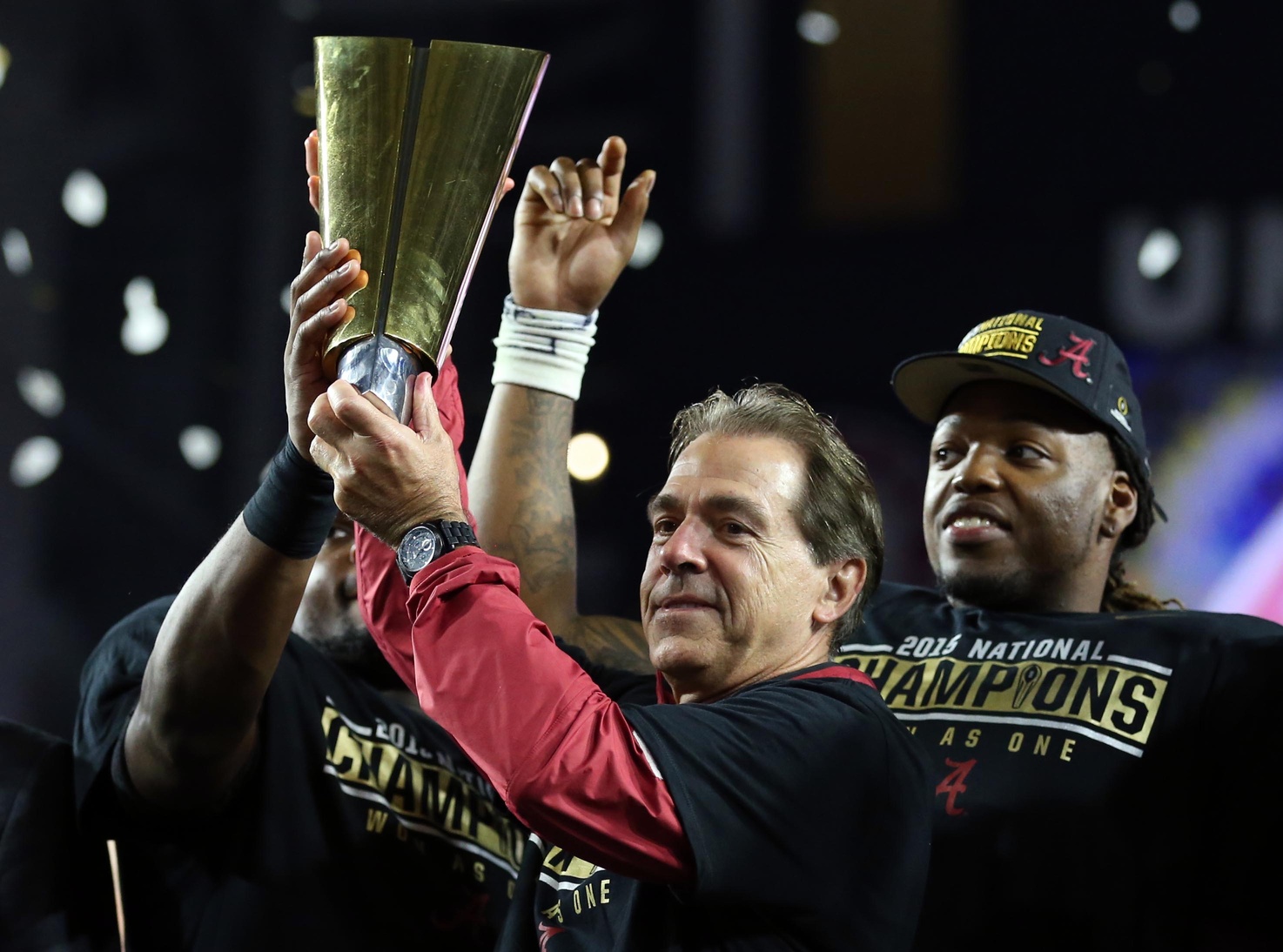 Let’s not forget the fact that Year 10 in Tuscaloosa for Saban isn’t even in the record book yet. A game (or two) is still left to be played.

The Crimson Tide, No. 1 in the College Football Playoff rankings, will face No. 4 Washington in the Peach Bowl on New Year’s Eve. The exact number depends on which direction your bookie is leaning, but they’re favored by about two touchdowns.

The 2016 campaign has increasingly felt like an inevitable coronation for ‘Bama — fait accompli, if you will. Jalen Hurts was just named the SEC’s Offensive Player of the Year as a freshman. Jonathan Allen was similarly awarded on the defensive side of the ball. The Tide will again be well represented come NFL Draft time, too.

Saban’s decade of dominance includes 2007, his first year on the job, when he inherited a dusty old program from the failed Mike Shula.

With very few difference-making players and facilities that bear little resemblance to the palatial estate we see today, it took Saban just one spin through the calendar to wake the sleeping giant we lovingly call Big Al.

Perhaps most terrifying, if anything, Saban and Co. are running even further away from the rest of the conference — maybe the rest of the country. He’ll likely sign the best recruiting class in the nation for the seventh straight year in February. The league’s other blue-blood programs can’t seem to get their act together, either.

In the East, Florida can’t find a QBs. Georgia is transitioning from Mark Richt to Saban disciple Kirby Smart. Tennessee ran out of bricks.

In the West, LSU’s offense is still stuck in the Stone Age. Auburn is all peaks and valleys with no consistency. The two Magnolia State programs, Ole Miss and Mississippi State, made a commendable push but might have hit a glass ceiling.

Alabama seems positively unstoppable right now. At a relatively young 65 years of age, Saban hasn’t even hinted at retirement. He said recently that he’ll coach as long as he enjoys it and his health allows it. He’s also said — notably in an interview with Auburn alumnus Charles Barkley — that he hates losing more than he loves winning.

If that’s indeed the case, then there’s very little hate in Saban’s crimson-clad life. And there probably won’t be any time soon.