Lane Kiffin situation a possible distraction for Alabama ahead of playoff

Alabama is as good as any team in the country at blocking out distractions. Coach Nick Saban knows how to keep his players focused.

But with a little less than four weeks to go before the Peach Bowl, which will serve as the site of the Crimson Tide’s College Football Playoff semifinal matchup vs. Washington, there’s a disturbance in the force.

Coordinator Lane Kiffin, who deserves a lot of the credit for ‘Bama being just as scary offensively as defensively this season, is currently making the rounds on the rumor mill. The former USC, Tennessee — sorry, Volunteers fans — and Oakland Raiders head coach appears ready to lead his own program once again.

Kiffin arrived in Tuscaloosa prior to the 2014 season, inheriting an offense that traditionally had been a pro-style system.

Nowadays, the Tide are a no-huddle, hurry-up, spread-based scheme that’s anything but old school and can beat defenses in more ways than ever before during the Saban era. The transformation has been terrifying for opponents.

Keep in mind that Kiffin has pulled this off with his third different quarterback in three seasons. In 2014, it was a fifth-year senior in Blake Sims finally getting a chance to start. In 2015, it was a transfer from Florida State — and another fifth-year senior — in Jake Coker, who originally couldn’t beat out Sims, let alone Jameis Winston.

While 2016’s starter, Jalen Hurts, is more talented than either Sims or Coker, that doesn’t make Kiffin’s wizardry any less magical. 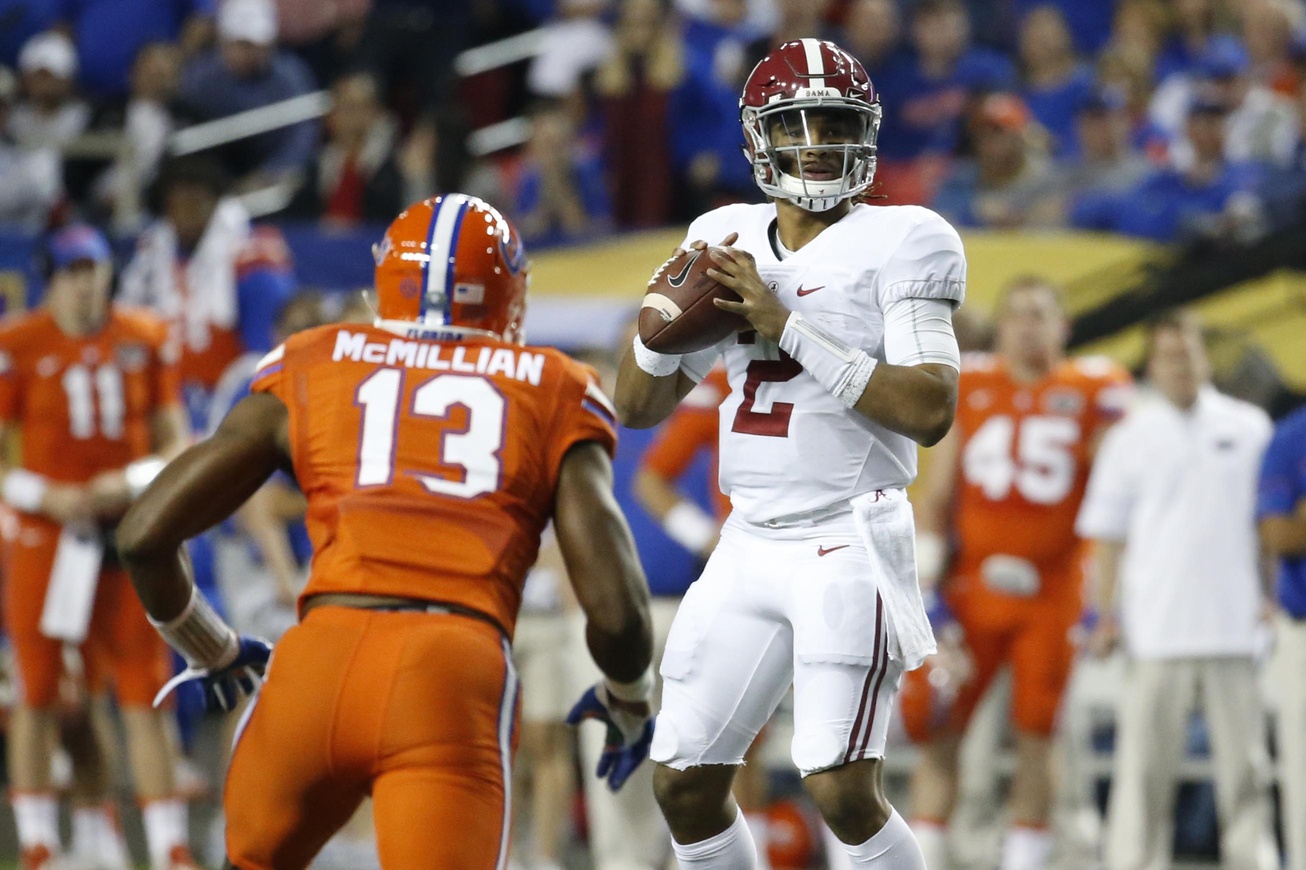 Hurts (above), of course, is just a true freshman and was playing high school football at this time a year ago. According to the composite rankings at 247Sports, he was only the sixth-ranked QB in the SEC for the most recent recruiting class.

Nevertheless, the running game has thrived — it’s gotten better, actually — despite the defection of Heisman Trophy winner Derrick Henry. Hurts is twice the runner Sims was and tenfold what Coker could do. Also, the passing game has put up almost identical numbers to last season and actually improved in terms of efficiency rating.

Saban’s four national-championship teams averaged anywhere from 32.1 to 38.7 points per game. This year’s club is averaging 40.5.

Needing to rehabilitate his image after failing with the Trojans, not to mention his jilting of the Vols, Kiffin is being mentioned for vacancies at places like Houston and potential openings at locations like Cal.

Alabama just went through a similar situation last season, when longtime defensive coordinator Kirby Smart was hired to be the head coach at Georgia. Instead of leaving for his alma mater right away — he was forced to pull double duty to some degree, though — Smart stayed with the Crimson Tide and won his fourth ring.

Should Kiffin accept another job, it remains to be seen if he’ll do like Smart did and see the campaign through to the very end.

“I think it depends on the circumstance and the situation,” Saban said Saturday after winning the SEC Championship Game, “and I think those are things that people have to agree on relative to what their goals and aspirations are, the circumstance and situation that they’re in, their commitment to our players and our team, and do we think it’s going to affect our organization long term. So those things are always evaluated.”

Saban (below) himself has gone through this uncomfortable ordeal himself. Toward the end of his fourth season as defensive coordinator of the Cleveland Browns in 1994, he agreed to become head coach at Michigan State. 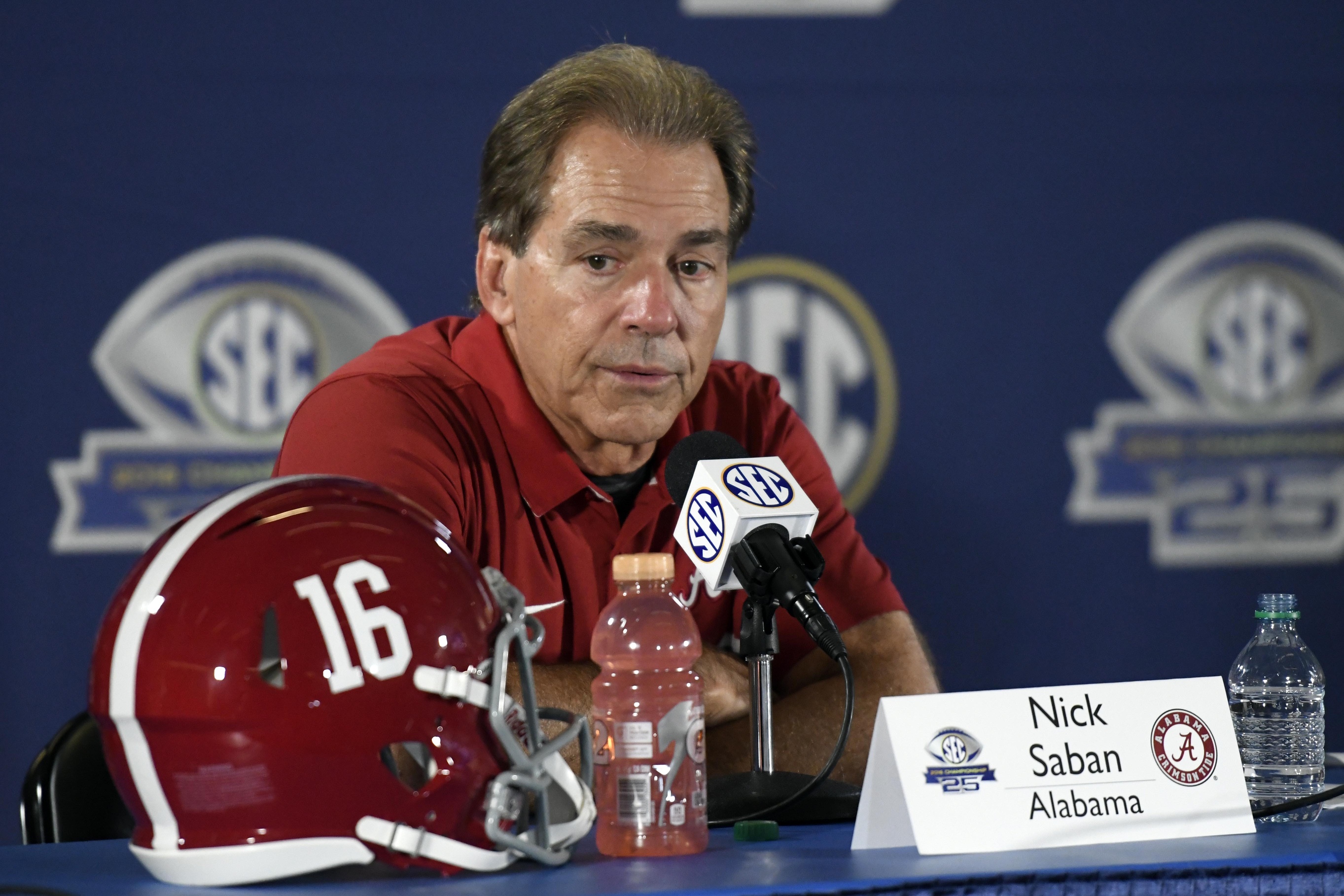 “The job that I got when I was the defensive coordinator to the Cleveland Browns, I got early in December,” he said. “We had four or five games left in the season. We were a really good team and made it to the playoffs. We won first round of the playoffs, lost in the second round. I stayed there the whole time, hired four or five guys, did the best job I could do for the players. That’s the way I believe. But if somebody else didn’t believe that, then that wouldn’t be the right thing for them to do.”

While Saban doesn’t have any reason to stand in the way of Kiffin getting a head-coaching, job, he would for a lateral move to continue as an offensive coordinator — specifically for new full-time LSU coach Ed Orgeron, who was on Kiffin’s staff at Southern Cal. As a matter of fact, Orgeron was the interim coach there after Kiffin got fired.

If Orgeron were able to poach Kiffin, it would be quite the coup. The Tigers could upgrade their staff and simultaneously strike a blow to Saban.

Regardless, whether or not Kiffin accepts a position elsewhere, the mere fact that this is a topic of conversation has to take away from his attention to the task at hand. The Huskies feature the 10th-ranked defense in America, by the way.

Although the Crimson Tide survived Smart’s exit in last year’s playoff, don’t forget that Clemson racked up 40 points and 550 yards of total offense — they had no answers for Deshaun Watson — even with all those difference makers on D. Did Smart truly put forth his best effort with one foot out the door already?

Saban wants Kiffin to be a head coach. But what he wants even more is to win it all again. Distractions only make that mission more difficult.

RECENT ARTICLES
ALABAMA
After last year, Bama wary of Auburn's ability to ruin the party
ALABAMA
Alabama insider explains what Mac Jones winning the Heisman would do for Crimson Tide program
ALABAMA
Mac Jones explains how he handles receiving attention for being a Heisman contender
ALABAMA
Pair of former Alabama players placed on COVID list by their NFL teams
HOMEGATING KIT
FROM