It took a little longer than a lot of Alabama fans expected, but Nick Saban has settled on his new offensive coordinator.

According to multiple reports, Brian Daboll will replace the departed Steve Sarkisian as architect of the offense and Saban’s play caller. He was most recently tight ends coach for the Super Bowl-champion New England Patriots.

Sarkisian, of course, was only the Crimson Tide’s OC for a single game: the defeat to Clemson in the College Football Playoff National Championship. Lane Kiffin, now head coach at FAU, was the man behind the curtain for the majority of the past three seasons. Not only did he bring the spread to Tuscaloosa, but he brought drama, too.

Saban, of course, is no fan of drama. Distractions are kryptonite to him. The Daboll hire, fairly drama-less in nature, is more Saban’s speed.

Even Sarkisian’s brief tenure with ‘Bama wasn’t short on spectacle. After drinking himself out of a Top 5 job in America at USC, he signed on as an “offensive analyst” in September. His exit from the Trojans was out of a Hollywood script.

Apparently, Saban and Kiffin simply couldn’t stand the sight of each other long enough — one too many “ass chewings,” I suppose — to make it to the finish line this past season. After originally agreeing to stay aboard with the Tide through the College Football Playoff, Kiffin was cast aside between the semifinal and final.

With Sarkisian at the controls, the offense racked up 376 yards and 31 points. However, it wasn’t enough to top the Tigers.

The coaching carousel is little more than a game of dominoes. Once Kyle Shanahan left as offensive coordinator of the Atlanta Falcons to become head coach of the San Francisco 49ers, Sarkisian (below) was tapped to fill that vacancy in the Peach State. 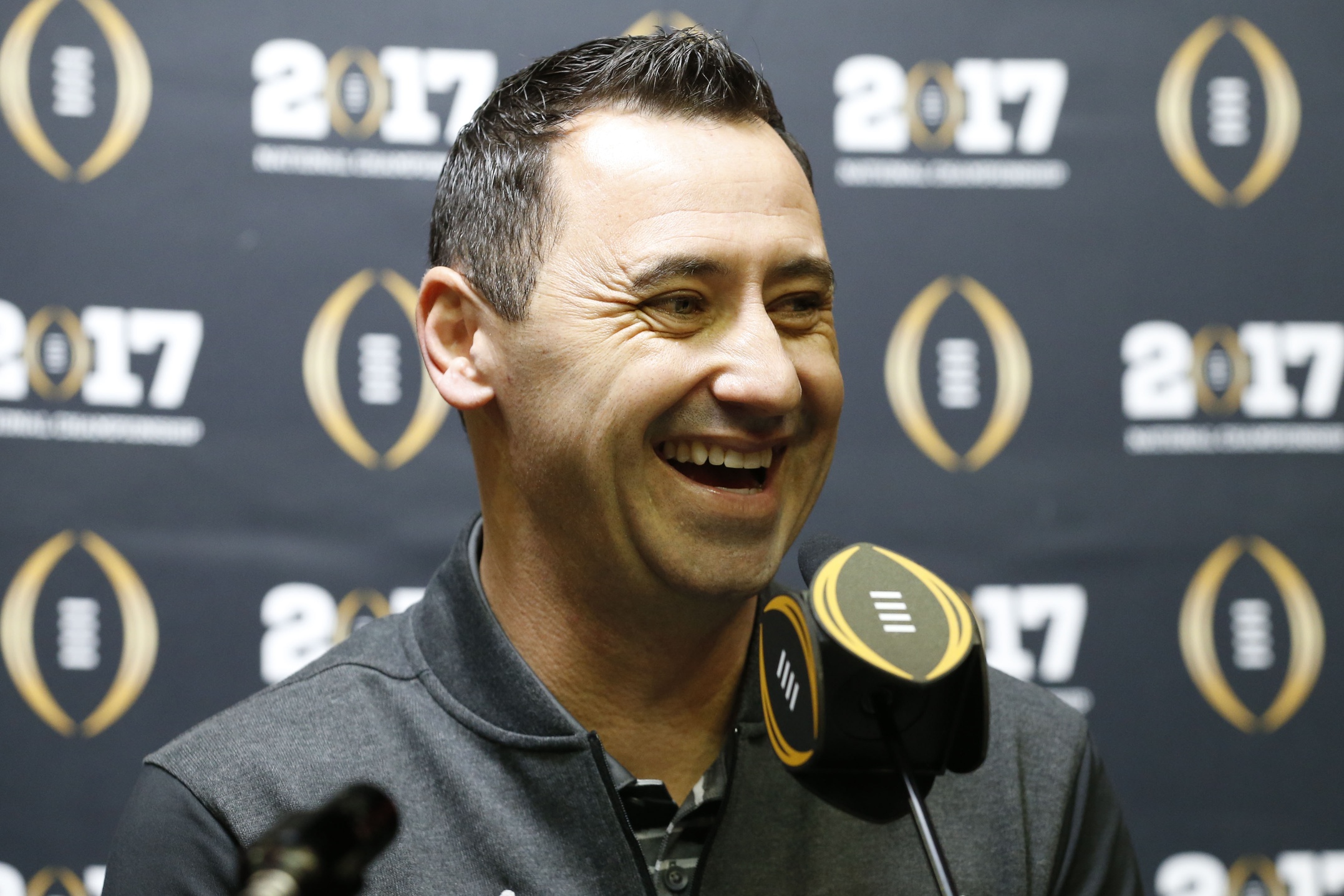 It’s difficult to blame Sarkisian for making such a move, despite having set up shop at Alabama for only half a year or so. He inherits arguably the NFL’s most explosive offense, with reigning league MVP Matt Ryan — Super Bowl loser or not — commanding the huddle. He can just as easily rebuild his damaged reputation in the ATL.

Plus, needless to say, working for Saban is no picnic. Calling consecutive pass plays can sometimes lead to yet another sideline tirade.

Unlike Kiffin and Sarkisian, who were big personalities with big jobs before ever being fitted for crimson, Daboll fits the mold of a career assistant. As a matter of fact, he was a GA for Saban at Michigan State from 1998-99.

Either Saban is the Bill Belichick of college football, or Belichick is the Saban of the NFL. One way or another, the two coaching legends — all-time greats, no doubt — have a similar philosophy. Daboll enjoyed two stretches on Belichick’s staff in various capacities, the first from 2000-06 and the second from 2013-16.

If there was ever a my-way-or-the-highway head coach in the pros, it’s Belichick. Saban is exactly the same way at the collegiate level.

As such, Daboll will be familiar with “The Process.” Even after working exclusively in the NFL for 17 seasons, he should have very little learning curve upon his arrival. However, we don’t yet know if he’s an ace recruiter like Kiffin was.

Further inspection of Daboll’s résumé reveals that he was also offensive coordinator for the New York Jets, Miami Dolphins and Kansas City Chiefs — albeit only for a total of four years among those three stops. It’s safe to say that he’s grown familiar with the inner workings of a pro-style scheme during his career.

And therein lies the most interesting question with Daboll on a headset as opposed to a West Coast guy like Kiffin or Sarkisian.

Is Daboll going to employ the hurry-up, spread-based, wide-open system that Kiffin brought to ‘Bama and Sarkisian continued? Or did Saban have a change of heart and wants to revert back to his signature smashmouth style of years past? 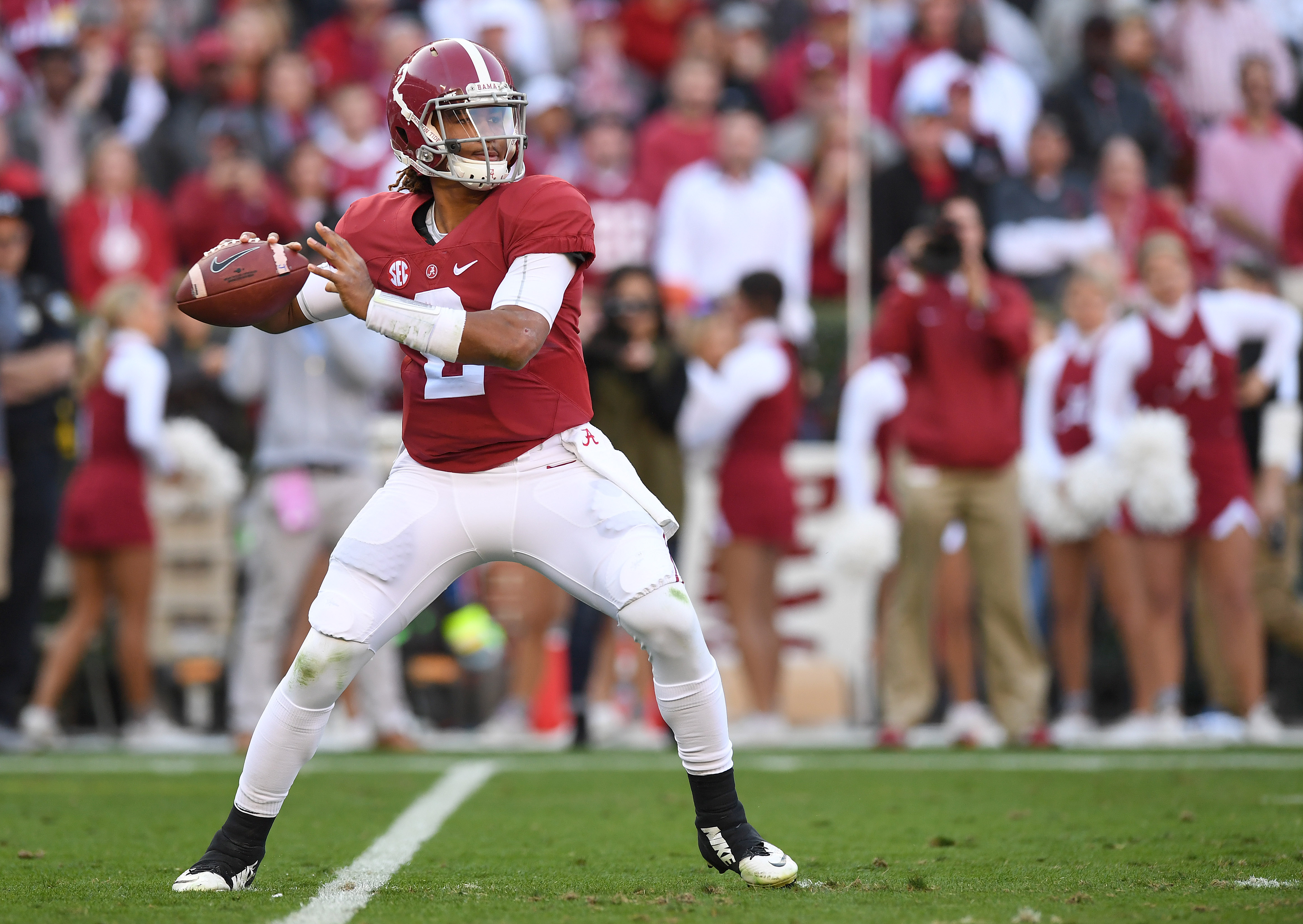 Based on the personnel currently in place — beginning with the game’s most important position in rising-sophomore quarterback Jalen Hurts (above) — it makes sense to stick with the spread for now. While Hurts was a tremendous running threat throughout his freshman campaign, he struggled to throw the ball consistently down the stretch.

Remember, the last QB that Daboll worked with was Tom Brady. As a pure passer, Hurts has more in common in with Tom Cruise than Tom Brady.

That’s not to say Hurts can’t improve from the pocket and become a more effective thrower of the football. He flashed enough as a frosh to show that he can. Still, taking away the dual-threat element he brings to the table would be foolish.

The pace with which the Tide offense plays in 2017 is likely more relevant than how often Hurts is in the shotgun or how many wideouts are in formation. Saban’s defense was on the field for 99 snaps in the national title game — entirely too many, even for the premier unit in the country. Jonathan Allen and Co. eventually ran out of gas.

Slowing down the O a bit could take some pressure off the D. After all, this is the SEC, not the Big 12. Alabama isn’t Texas Tech.

In addition to Hurts, Daboll inherits some of the best offensive talent in the nation. The three-headed monster of Bo Scarbrough, Damien Harris and Joshua Jacobs at running back is now joined by Najee Harris, another 5-star signee.

Even with the early entry of left tackle Cam Robinson to the NFL Draft, the offensive line will be more than capable — highlighted by right tackle Jonah Williams, a freshman All-American this past season — of opening up holes aplenty for all those tailbacks. Hurts can tuck it and run as well as any quarterback, too.

Daboll’s personality is a change from Kiffin and Sarkisian, although it remains to be seen if the personality of the offense changes in kind.