In order to beat Alabama, you need some help from, well, Alabama

Halfway through his 10th campaign at Alabama, coach Nick Saban has put together a ridiculous record of 111-18.

Keep in mind that six of those losses came in 2007, his first year in Tuscaloosa, when he took over a once-proud program that had just finished under .500 for the fourth time in a 10-year span. He was fielding Mike Shula’s players.

From 2008-15, the Crimson Tide went 98-12 and won four national championships — that’s an average of 12.25 wins per season against only 1.5 losses. It’s one of the most dominant runs in college football history, especially since dynasties are tougher to produce now than they were back when Bear Bryant patrolled the sideline.

With so few losses to examine, it’s fair to assume that there’s a common thread. What’s the antidote for ‘Bama under Saban?

Because the quarterback position is more important than ever, it’s only natural to start there. A trio of dual-threat Heisman Trophy winners have beaten the Tide: Tim Tebow in 2008, Cam Newton in 2010 and Johnny Manziel in 2012.

Manziel’s improbable victory seemed to cement the false narrative that the key to defeating Alabama is having a running QB. Johnny Football threw for 253 yards that day and added 92 more on the ground. His ability to keep plays alive — both inside and outside the pocket — in the face of heavy pressure was dazzling.

However, a closer look at that box score reveals something more important: Texas A&M had won the turnover battle 3-0.

Despite Manziel’s (below) frenetic style of play against what would end up being the No. 1 defense in the country that season, he didn’t have an interception or a fumble. But the Crimson Tide threw 2 INTs and also coughed it up once.

Was a similar story told — somewhat under the radar, I suppose — in the losses to Tebow and Newton? Indeed they were. In 2008, Florida committed zero turnovers while ‘Bama turned it over once on an INT. In 2010, Auburn did lose a fumble. The Tide fumbled twice, though. Turnovers are more paralyzing than scrambling signal callers.

The kicking game has also been an Achilles’ heel at times for Saban. At some point, every coach is at the mercy of his kicker.

The Game of the Century in 2011 between Alabama and LSU turned out to be little more than a field-goal contest. Yes, there was some tremendous defense played by both clubs, but we were also witness to some atrocious offense.

Each team turned it over twice — that part of the tilt was a draw. The difference was the kickers. Drew Alleman was 3-of-3 that night for the Tigers, while Cade Foster and Jeremy Shelley combined to go 2-of-6 for the Crimson Tide. The Bayou Bengals prevailed, with Alleman splitting the uprights in overtime for the game-winner.

In the rematch two months later, Saban and Co. were plus-2 in turnovers and shut out LSU 21-0 to claim the national title.

What conclusion can we draw? More often than not, teams don’t beat ‘Bama. To some degree, the Tide beat themselves. Nothing levels the playing field like turnovers and missed field goals, which are essentially turnovers, too.

Ole Miss failed in its attempt to top Alabama for the third consecutive time — never before done in school annals — earlier this season. Despite building a 24-3 lead with only 2:47 left before intermission, the Rebels allowed the Crimson Tide to go on a 45-6 run over the next 30 minutes of game clock and ultimately fell 48-43.

As you’d expect, ‘Bama committed only one turnover to Mississippi’s two. First downs and yardage totals were fairly even.

Even more catastrophic for the Rebs, both of their giveaways resulted directly in Tide points. Two Chad Kelly fumbles were returned for touchdowns, one 3 yards by Da’Ron Payne and the other 75 yards by Jonathan Allen. 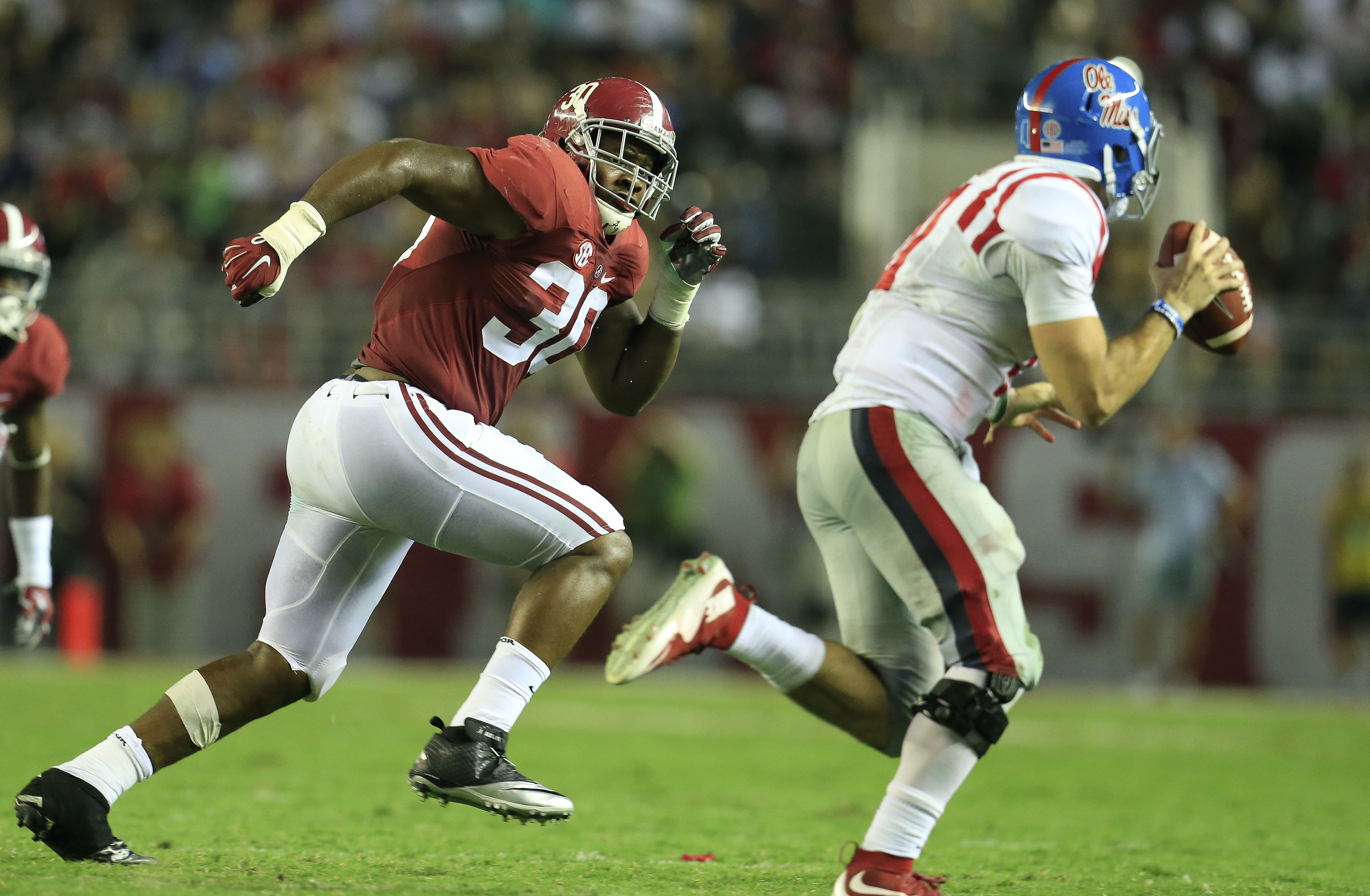 In 2015, Kelly (above) had directed a 43-37 upset of Alabama — in Tuscaloosa, no less. He announced himself as a force to be reckoned with in the SEC by completing 18-of-33 passes for 341 yards with 3 touchdowns and 0 interceptions. Adding 21 yards and a TD on the ground, more fuel was added to the mobile quarterback theory.

But the Crimson Tide turned it over five times. Ole Miss had zero turnovers. And yet ‘Bama still almost won the game.

The year before, with Bo Wallace at the controls for the Rebels, the turnover disparity wasn’t so stark. It did favor Mississippi, though. The Tide gave it away two times to just one for the Rebs, who prevailed 23-17 in Oxford.

The national championship game this past January should have killed this half-baked idea once and for all. Clemson’s Deshaun Watson, one of the most dangerous running-and-throwing talents in recent memory, carved Alabama up with 405 yards through the air and 73 more on the ground. He still lost the game 45-40, though.

As brilliant as Watson was in Glendale, he was intercepted once. Conversely, the Crimson Tide were turnover-free.

‘Bama travels to Tennessee in Week 7. A Tide victory strengthens their hold on the division and strikes a serious blow to the Volunteers, but an upset by the Vols likely gives them the East. It would also create chaos in the West.

UT features the quintessential dual-threat option in Joshua Dobbs. He’s tied for second in the conference with 14 touchdown passes and also tied for second among QBs with 5 TD runs. But he’s a turnover machine this season — Tennessee give it away seven times in a loss to Texas A&M last week — and Dobbs leads the league with 8 interceptions.

RECENT ARTICLES
ALABAMA
Alabama signee asks for his release from National Letter of Intent
ALABAMA
NFL insider says 'no final decision' has been made by 49ers when it comes to No. 3 overall pick in the draft
ALABAMA
Alabama displays Bryant-Denny Stadium's 7-ton elephant statue
ALABAMA
Alabama basketball lands sought-after transfer from Furman