Alabama a tough assignment for Arkansas, pleasant surprise or not

The game of the week in the SEC is in College Station, although there’s a pretty interesting showdown in Fayetteville, too.

Right about the time Tennessee-Texas A&M is wrapping up at Kyle Field, Alabama-Arkansas will kick off at Razorback Stadium. The Crimson Tide are, expectedly, undefeated. The Hogs, however, are a pleasant-surprise 4-1.

The Tide are 5-0 and as loaded as ever on offense, defense and special teams. Along with the similarly unbeaten Aggies, they control their destiny in the West. Though the Razorbacks have already suffered a loss in the division — to aforementioned A&M — an upset of ‘Bama would make things awfully interesting.

It will be a tall task for the Razorbacks, even at home, as coach Nick Saban and Co. appear to be on cruise control.

On offense, true freshman quarterback Jalen Hurts plays with a calm beyond his years and hasn’t been intercepted since the season opener. He’s a dual-threat QB like no other started by Saban.

Defensively, Alabama is simply an assembly line of NFL talent at this point. Despite seeing four star players go in Round 2 of the draft this past spring, the Crimson Tide are first in the conference against the run, second against the pass, second in yards allowed, second in points allowed — same old story.

Perhaps there is a chink in the armor on special teams, where Saban wasn’t totally happy with what he saw in Week 5. 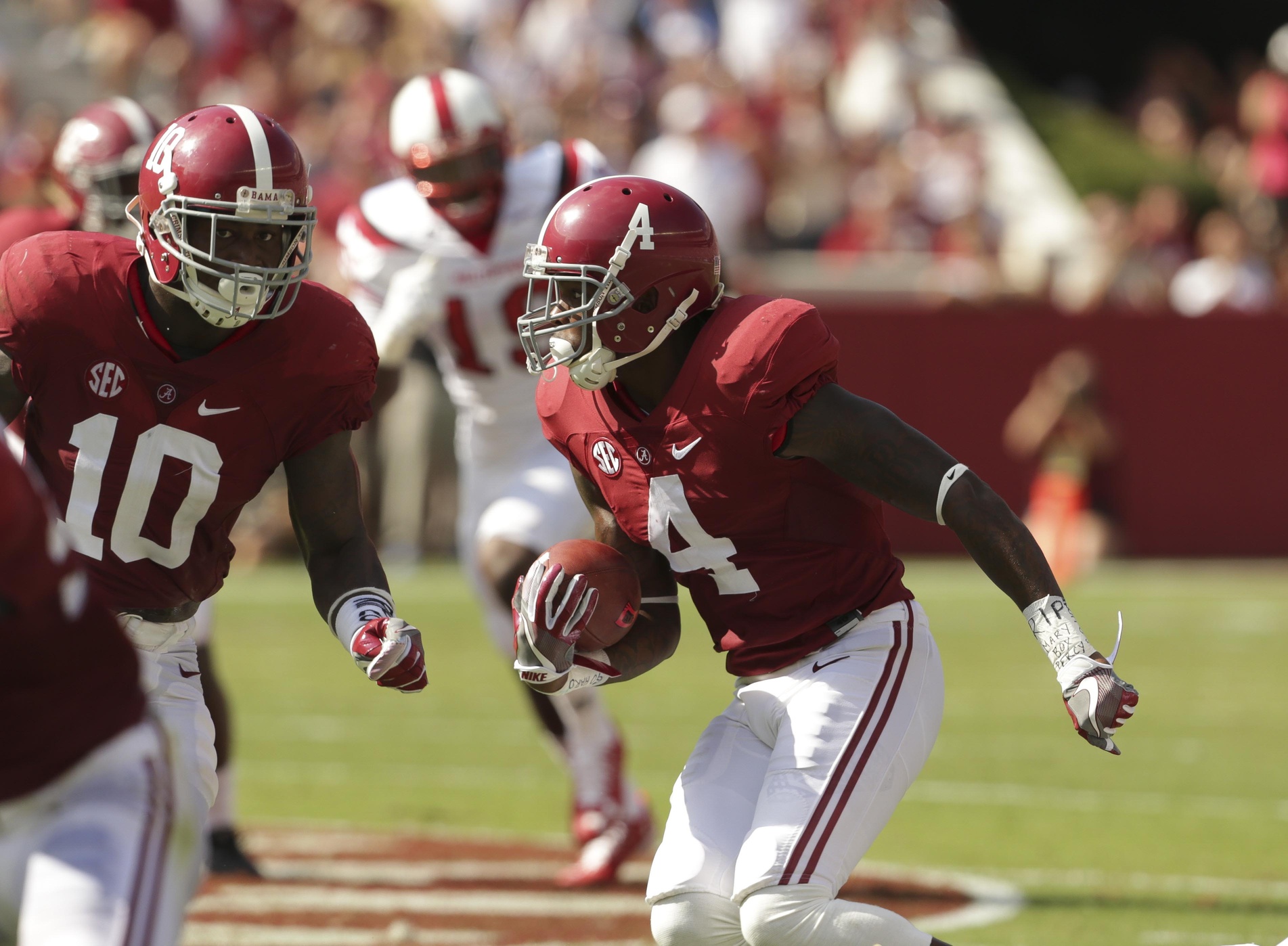 Safety Eddie Jackson (above), who doubles as the Tide’s primary punt returner, let one Kentucky punt hit the turf. After a Wildcat-friendly bounce, the ball came to rest on the ‘Bama 21 for a 61-yard field position-flipper.

It’s a minor complaint from the perfectionist Saban, of course. He failed to mention that his team is No. 1 in the league with a punt-return average of 19.7 yards. There have been six touchdowns scored on punt returns so far in the SEC, and Alabama has two — one each from Jackson and Xavian Marks.

Nevertheless, Jackson agreed with Saban’s assessment, admitting to misjudging a few punts and not being aggressive enough.

“Eddie’s always shown great judgment to get that part of it done,” Saban said. “But the No. 1 thing on punt return is possession of the ball. If you can make a first down with the return, that’s great, change field position. We want to make explosive plays on special teams, but we also don’t want to give up field position because we’re not making good judgments and decisions about fielding the ball.”

Arkansas is a middle-of-the-pack program offensively and defensively according to the raw numbers. That being said, the eye test suggests the Razorbacks do a better job moving the ball than stopping it.

Quarterback Austin Allen — in his first year as a starter taking over for his older brother, Brandon Allen — is the top-rated passer in the SEC. With a TD-to-INT ratio of 12-to-2, he’s making the most of his opportunities and yet also limiting mistakes. Like Hurts, Allen looks to be unflappable, too.

Allen has helped cover for a Hogs running game that hasn’t been as effective in 2016 as it was a season ago. 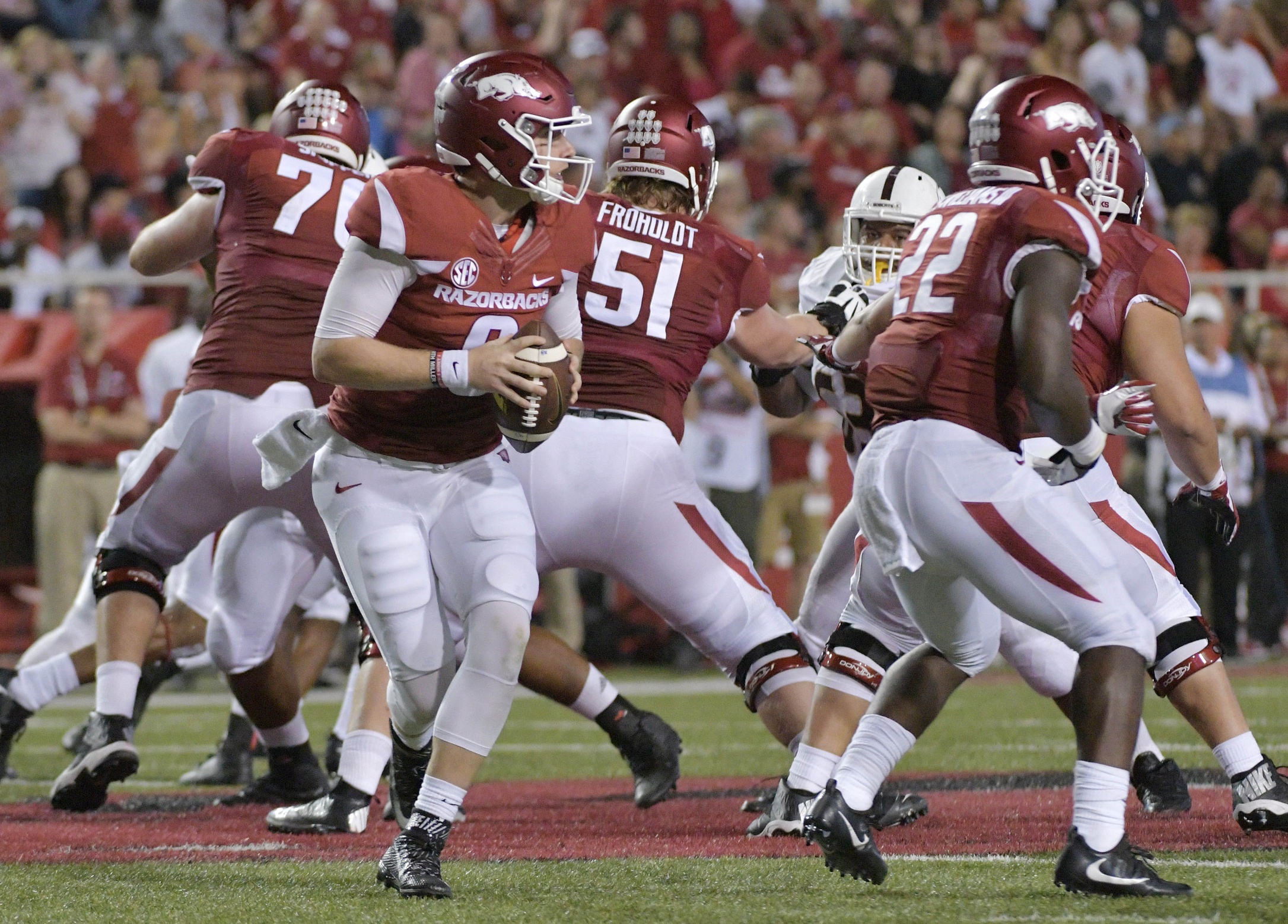 There is reason to believe that Arkansas will score points, as Allen (above) is resourceful and has plenty of skill-position talent at his disposal. But keeping the Crimson Tide off the scoreboard is another story entirely.

Arkansas is only 10th in the conference against the run, surrendering 163.4 yards per game — 5.2 yards per carry allowed is dead last in the league by a wide margin. ‘Bama features four capable tailbacks in Damien Harris, Joshua Jacobs, B.J. Emmons and Bo Scarbrough, plus Hurts is the club’s second-leading rusher.

With Hurts at the helm, the Tide have employed more run-pass options and designated quarterback runs than previously under Saban.

“He’s the biggest, strongest running quarterback that we’ve faced,” Arkansas defensive backs coach Paul Rhoads said Tuesday, according to 247Sports. “He’s deceptively fast. The only reason I say deceptively fast is it’s effortless to him when he’s running. It doesn’t look like he’s running very fast and people have a hard time catching him.”

Scarbrough was expected to be the bell cow of this running game, but he got off to a slow start and is now battling injury. While Harris sports a sparkling average of 8.5 yards per carry, he’s a bit banged up, too.

Jacobs, an unheralded three-star recruit, has picked up the slack as a true freshman. The past two weeks, following the injuries to Scarbrough and Harris, he has run for a total of 197 yards and 3 scores on just 27 carries. Even with Heisman Trophy winner Derrick Henry gone, Alabama averages 5.4 yards per carry as a team.

Through the air, wide receiver Calvin Ridley and tight end O.J. Howard are two of the toughest one-on-one matchups in the SEC.

“I don’t know if I’ve ever coached against a team that’s more balanced than they are,” Rhoads said. “That’s run/pass, that’s distribution, that’s personnel, that’s formationally. They’re extremely balanced in everything that they do, and that makes preparation quite challenging.”

There’s a lot to like about this Razorbacks squad, but it’s going to take a stunner for that like to turn into love.