Even in defeat, I can make a pretty strong argument that the most impressive player I saw in Week 4 was Arkansas quarterback Austin Allen.

The junior from Fayetteville was 28-of-42 passing for 371 yards with 2 touchdowns and 0 interceptions, but it wasn’t enough in a 45-24 loss to Texas A&M in Arlington. The scars from this one could take a while to heal.

The Aggies feature Myles Garrett, the most feared pass rusher in college football, plus Daeshon Hall is a terrorizing force himself on the other side of the defensive line. Somehow Allen was only sacked once at AT&T Stadium, although it was a costly one — Hall put him on his back and forced a fumble in the process.

Driven into the turf repeatedly and wincing in pain between plays, Allen kept shaking it off delivering dimes down the field.

A&M quarterback Trevor Knight was bolstered by a dominating run game that racked up 388 yards and averaged 9.9 per attempt. The Oklahoma transfer was responsible for 157 of those yards and 2 TDs himself.

Allen, on the other hand, was forced to carry the Hogs with his right arm from start to finish. While Rawleigh Williams III was effective in spots with 79 yards and a score on 17 rushes, the team only totaled 120 yards on 40 attempts — a measly 3 yards per crack isn’t going to keep Garrett and Co. at bay.

Both programs came into the neutral-site matchup unbeaten, with the winner able to announce itself as a genuine contender in the West. 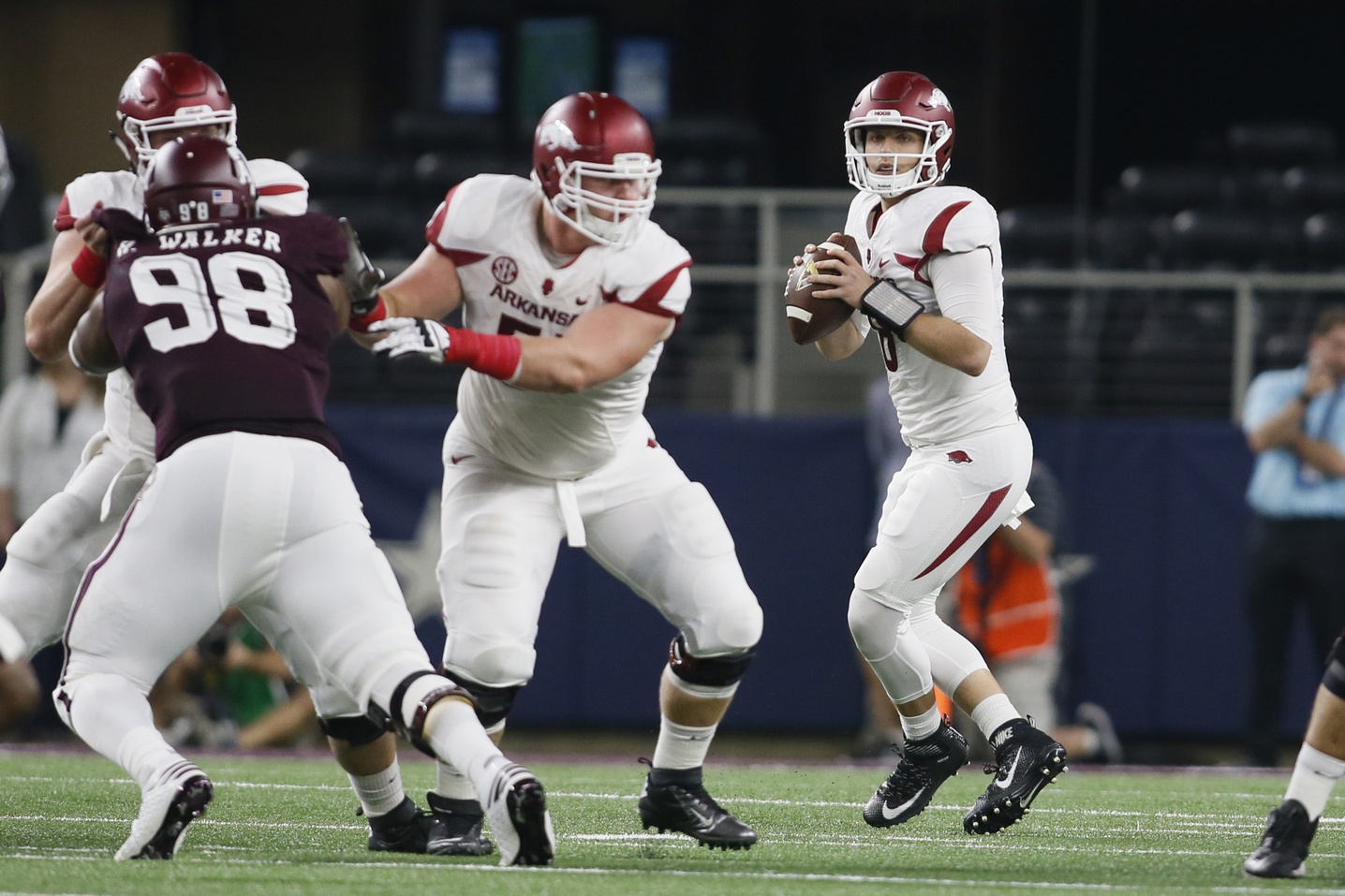 Now 4-0, Texas A&M appears to be a much more balanced team than what we’ve seen in recent years. Last season’s Aggies had trouble running the ball and stopping the run, but that’s no longer the case in College Station.

As for Arkansas, even after falling to 3-1, there’s reason for optimism. Brandon Allen, Austin Allen’s older brother, left for the NFL — he’s currently a member of the Jacksonville Jaguars — as one of the best QBs in school history. The fact that Austin Allen had to take over for his own sibling only amplified expectations.

Allen is third in the conference in passer efficiency rating (159.4), five spots ahead of the gratuitously praised Knight.

RELATED: Nuggets and tidbits from Week 4 in the SEC

But his performance Saturday wasn’t about the numbers. He continually stepped into throws with blitzers running free. The accuracy and anticipation Allen put on display — especially on high-degree-of-difficulty passes outside the numbers — was reminiscent of an experienced veteran, not a first-year starter.

Fortunately, the Razorbacks’ opponent in Week 5, Alcorn State, doesn’t have anyone on the roster that resembles Garrett.

Allen told reporters after the game that he was sore, but fine. Nothing that some treatment and rest couldn’t fix.

However, since Brandon Allen was the most experienced quarterback in the SEC a season ago, Arkansas had the third-ranked passing attack in the conference. With Austin Allen inheriting the job this year and having never thrown a pass that matters beyond high school, Bielema would supposedly revert back to his ground-and-pound approach. 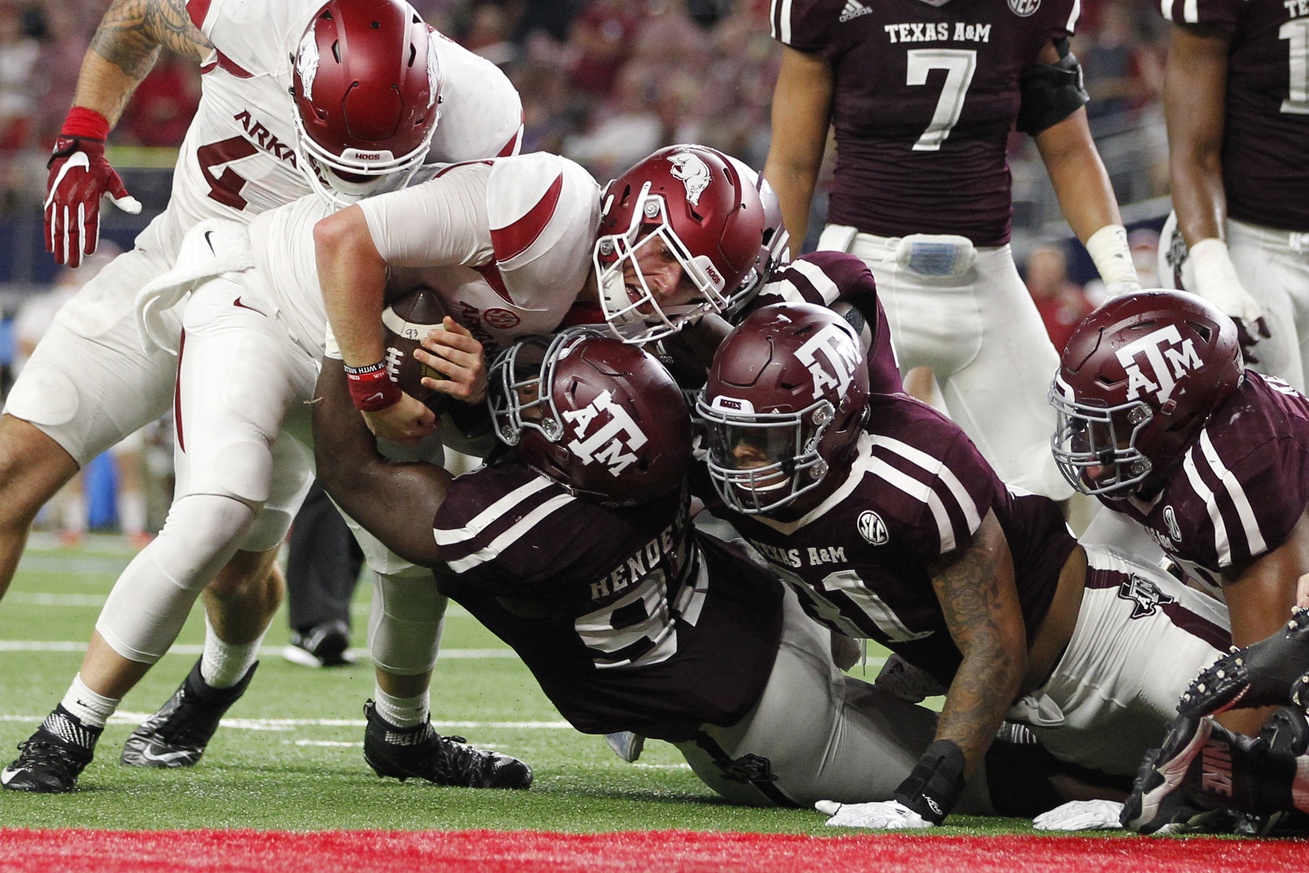 It’s fair to wonder if even Bielema has been pleasantly surprised at just how well his new signal caller has thrown the ball.

He’s needed production under center, too. Arkansas is the No. 11 rushing offense in the league, which is blasphemous for a Bielema-led team. The Razorbacks finished the 2015 campaign fourth in that category.

While Williams has posted 433 yards on the ground, good enough for fourth in the SEC, backups Kody Walker and Devwah Whaley are yet to crack triple digits. They average 3.7 and 3.5 yards per carry, respectively. Allen, not a bad athlete in his own right, has minus-15 yards — 1 TD, though — because he’s been sacked seven times.

The Hogs said goodbye to three starters along the offensive line from last year. Texas A&M took advantage Saturday with 10 tackles for loss.

“He’s a tough guy,” Bielema said of Allen. “I think our guys know that. But at some point, obviously, any hit like that can take care of him for the season as well.”

At one point, Allen actually needed to exit the game due to a bruised chest muscle. He took as vicious a pounding as any SEC player in Week 4. Seemingly after every big hit, he answered with a perfectly thrown pass.

Yes, Arkansas lost this game by three touchdowns. Ultimately, the defense ran out of gas in the second half and couldn’t keep the Aggies off the scoreboard. But nobody should lose light of the fact that Allen was positively brilliant. Some of the throws he made in pressure situations were nothing short of sensational.

Too bad he didn’t get a chance to see very many of them hit their mark. He was too busy peeling himself off the carpet.