After escaping Week 1 with a 21-20 victory over Louisiana Tech, Arkansas will visit Fort Worth, Texas to play Big 12 foe TCU at Amon G. Carter Stadium. Kickoff is set for 6 p.m. CT, and the game will be televised nationally on ESPN.

Here’s a closer look at how the former Southwest Conference rivals match up head-to-head:

QB Austin Allen vs. TCU pass defense: The Razorbacks signal-caller overcame adversity to help Arkansas outlast the Bulldogs in the season opener as he completed 20-of-29 passes for 191 yards, 2 touchdowns and a pair of interceptions. On Saturday, Allen will go up against a Horned Frogs secondary that allowed South Dakota State quarterback Taryn Christion to throw for 333 yards and 3 touchdowns in Week 1. 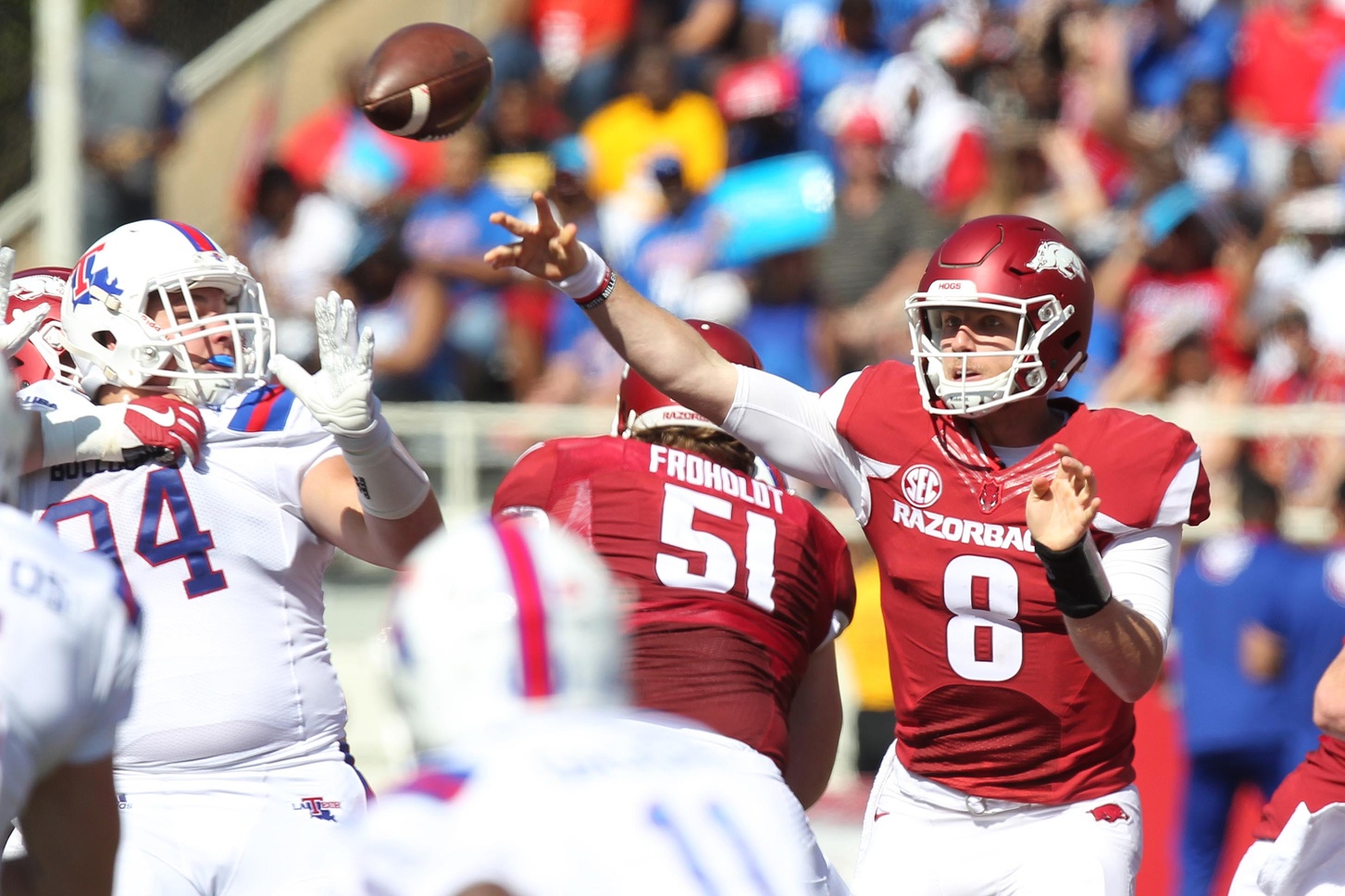 In 2015, TCU surrendered 215.8 passing yards per game (second in the Big 12) and finished the year with 7 interceptions. However, two of those picks were by senior Derrick Kindred, who was drafted by the Cleveland Browns in the fourth round of the 2016 NFL Draft. The Horned Frogs’ secondary didn’t look sharp in Week 1, while Allen spread the ball around to a variety of players. If the Razorbacks’ quarterback can avoid costly mistakes on third down, the Arkansas offense shouldn’t have much trouble attacking through the air.

RB Rawleigh Williams III/ Kody Walker vs. TCU run defense: Even though senior Alex Collins received the bulk of the carries, both Williams and Walker contributed to the 197.3 rushing yards that Arkansas averaged each week in 2015. However, what came as a surprise was that Williams III was the featured back when the Razorbacks ran 40 times for 106 yards against Louisiana Tech in Week 1.

Although Walker had 34 more carries last season, Williams III ran 24 times (96 yards, 1 touchdown) against the Bulldogs, while Walker had just 6 carries for 24 yards. Both running backs have the size — Walker is 6-foot-2, 240 pounds, and Williams III is 5-foot-10, 223 pounds — to run between the tackles, which may provide problems for a TCU defense that surrendered 182.6 rushing yards per game in 2015.

Arkansas WRs vs. TCU DBs: The Horned Frogs brought back a trio of safeties in senior Denzel Johnson and juniors Michael Downing and Nick Orr, but their cornerbacks took a major hit when Julius Lewis, who established himself as one of the team’s best guys in coverage as a freshman last year, suffered a season-ending leg injury right before spring ball was set to start. Junior cornerback Ranthony Texada returned from his season-ending knee injury in Week 2 of last season, but the Horned Frogs received another blow when another junior cornerback, Torrance Mosley, announced he was transferring to Southeastern Louisiana.

Against South Dakota State, the TCU secondary was certainly a work in progress, which could bode well for Allen and the Arkansas’ passing attack. The Razorbacks will certainly have a height advantage with senior wide receivers Keon Hatcher (6-foot-2) and Dominique Reed (6-foot-3) as well as senior tight end Jeremy Sprinkle (6-foot-6). Johnson (6-foot-2) provides some height at safety, but neither Downing (5-foot-11) nor Orr (5-foot-10) have much size. Although redshirt freshman cornerback Jeff Gladney stands tall at 6-foot, Texada is undersized at 5-foot-10. If Allen is able to utilize his targets’ height advantage, it could be another long day for the TCU secondary.

WHEN ARKANSAS IS ON DEFENSE

QB Kenny Hill vs. Arkansas pass defense: The junior signal-caller lit up South Dakota State in Week 1 as he completed 33-of-49 attempts for 439 yards and finished with 2 touchdowns and a pair of interceptions. It was quite a debut for Hill, who transferred to TCU from Texas A&M after throwing for 2,649 yards, 23 touchdowns and 8 INTs as a sophomore in 2014. 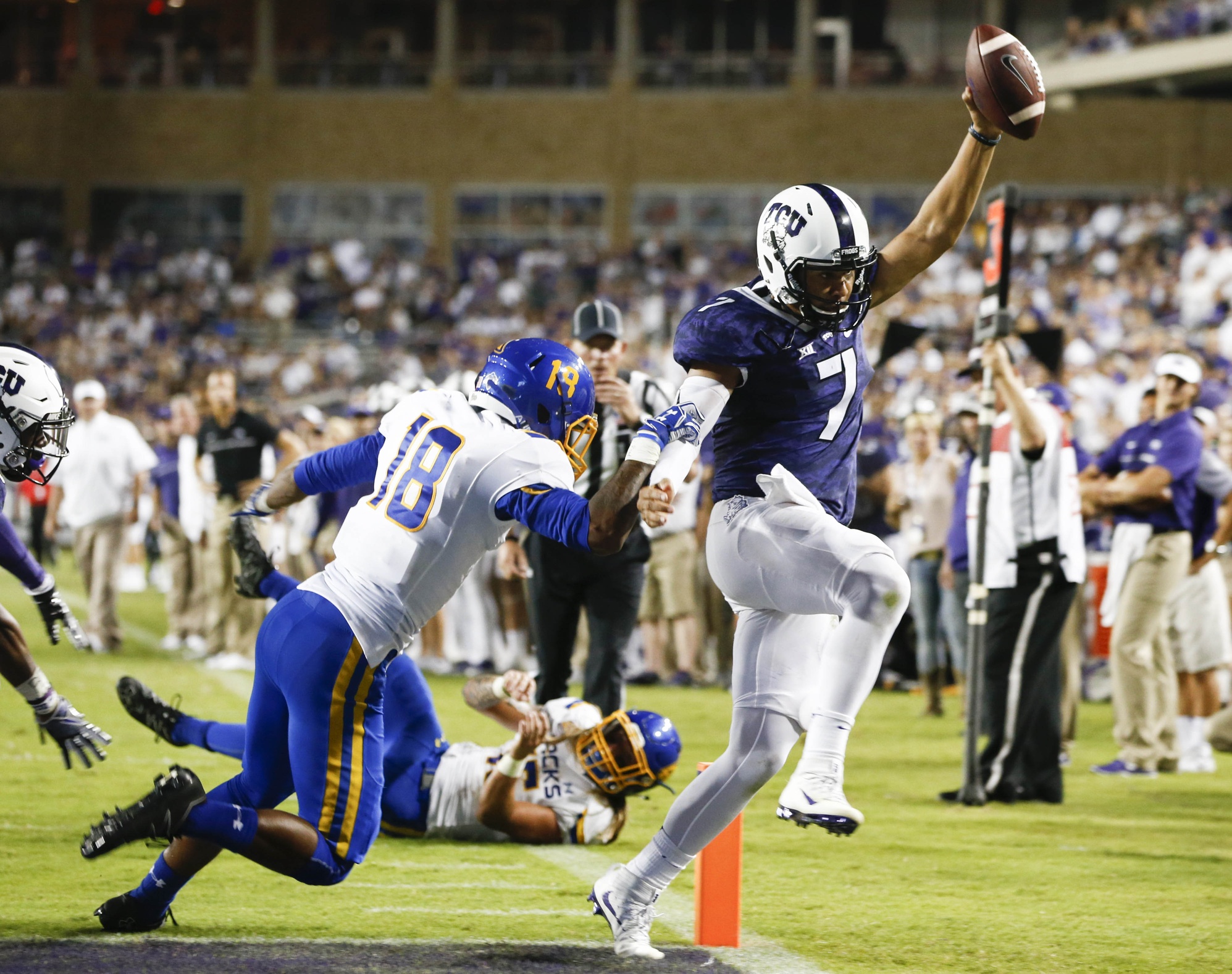 Last season, the Horned Frogs finished eighth in the nation in passing offense after averaging 347.5 yards per game — a figure which should scare the Razorbacks after they were among the worst passing defenses in 2015. Even though Arkansas allowed 212 passing yards in Week 1, which is considerably less than the 275.2 yards it gave up on average last season, that came against a Louisiana Tech passing attack that is far inferior than what TCU will trot out on Saturday night.

RB Kyle Hicks/QB Kenny Hill vs. Arkansas run defense: Collectively, the Horned Frogs present the Razorbacks with a challenge in the running game. Although junior Kyle Hicks was the featured back against the Jackrabbits, TCU also let Hill run wild in Week 1. Hicks rumbled for 59 yards and 2 touchdowns on 15 carries, while the quarterback ran 7 times and finished with 45 yards and 3 scores on the ground. Arkansas allowed Louisiana Tech to gain just 79 yards on 23 carries, but the Bulldogs’ running attack pales in comparison to TCU’s, which averaged 215.4 yards per game in 2015.

The Razorbacks were among the best run defenses in the nation a year ago as the 116.5 yards they allowed per game ranked 12th in the nation. But TCU has depth in its running game, and six different players ran for 20 yards or more to help the team register 223 rushing yards in Week 1. If the Horned Frogs are able to jump out to an early lead and then continue to run the way they did against the Jackrabbits, it may be troublesome for Arkansas.

TCU WRs vs. Arkansas DBs: This is perhaps the biggest question mark of any position battle, because it is unclear exactly how the Razorbacks’ secondary will look after junior cornerback Kevin Richardson II suffered a season-ending pectoral tear in Week 1. Richardson was the defense’s top nickel back and a key reserve at both corner and safety, so it will undoubtedly affect how the team will match up against the Horned Frogs. The good news for Arkansas is senior DJ Dean, who missed the opener because he was nursing a hamstring injury, will return on Saturday.

Ryan Pulley will handle duties at the other corner as he took over the boundary once Richardson went down. Hill spread the ball around against South Dakota State as eight different players finished with more than 20 receiving yards. Taj Williams, who had 11 catches for 158 yards and a touchdown in the opener, was the quarterback’s favorite target last week, but Hill also has Jaelan Austin (2 catches, 64 yards, 1 TD) and KaVontae Turpin (7 catches, 62 yards) at his disposal. With Richardson out, it may still be too early for the Arkansas secondary to find its groove against a pass-happy offense like TCU.

TCU entered 2016 with redshirt freshmen Ryan Graf and Adam Nunez at kicker and punter, respectively, but that didn’t stop the Horned Frogs from dominating special teams in Week 1. Not only did Graf hit each of the eight PATs he took as well as make his lone field goal attempt from 32 yards out, TCU also scored a touchdown on special teams when Turpin returned a punt 81 yards for a score. Arkansas, meanwhile, didn’t make many plays on special teams in Week 1. It doesn’t help that sophomore kicker Cole Hedlund has yet to attempt a field goal coming into this big game after making 9-of-15 attempts in 2015.