As I made a casual stroll on 46th Street through Broadway and 7th Avenue just an hour after Auburn lost yet another game to a high-ranked opponent, a thought popped into my mind that Times Square is the same as Gus Malzahn as an offensive guru: unreasonably hyped, frustrating to the point that it makes you question your sanity and full of flashes and distractions that mean nothing and, most importantly, are useless.

As only he can possibly explain after an inexplicable offensive output during a 21-14 loss to Georgia that would make even Tony Franklin blush, Malzahn had the audacity to call his offense “a work in progress.”

10 games in. Does he know how long a season lasts? https://t.co/XYldIhZx35

Sure, that excuse might fly in September when you have a new quarterback, and the kinks that don’t come up in fall camp show themselves during the first few games. But this was the 10th game of the year, your freshman QB is not new and, if anything, the offense has taken a step back since the Week 5 explosion against Mississippi State.

It’s not as if Malzahn needs to rely on the trick plays and razzle-dazzle that he used at the high school level and at Arkansas State, but he still believes that is part of what makes him unique. Little does he know that defensive coordinators caught onto his act years ago.

Examples? Let’s take a look at two plays in the second quarter.

With the Tigers driving and the Bulldogs on their heels, here is what Malzahn decided to go with: a fake snap directly to Boobie Whitlow that went nowhere; and then, on fourth down, the Wildcat snap to Whitlow, who had absolutely nowhere to run and ended up losing yards.

But let’s forget about that. Let’s discuss what Malzahn discussed for the past two weeks (or two months, if you dare) about putting Bo Nix in the best position to succeed. Do you know how many passes he ended up throwing? 50. Apparently Malzahn turned into the conservative Mike Leach all of a sudden.

Asking your freshman quarterback to throw that many passes is astounding, especially since 11 of those came early in the first quarter. No attempt at setting up the running game, and — if you don’t mind me alerting Malzahn to this — it is legal for a quarterback to throw farther than 20 yards downfield. 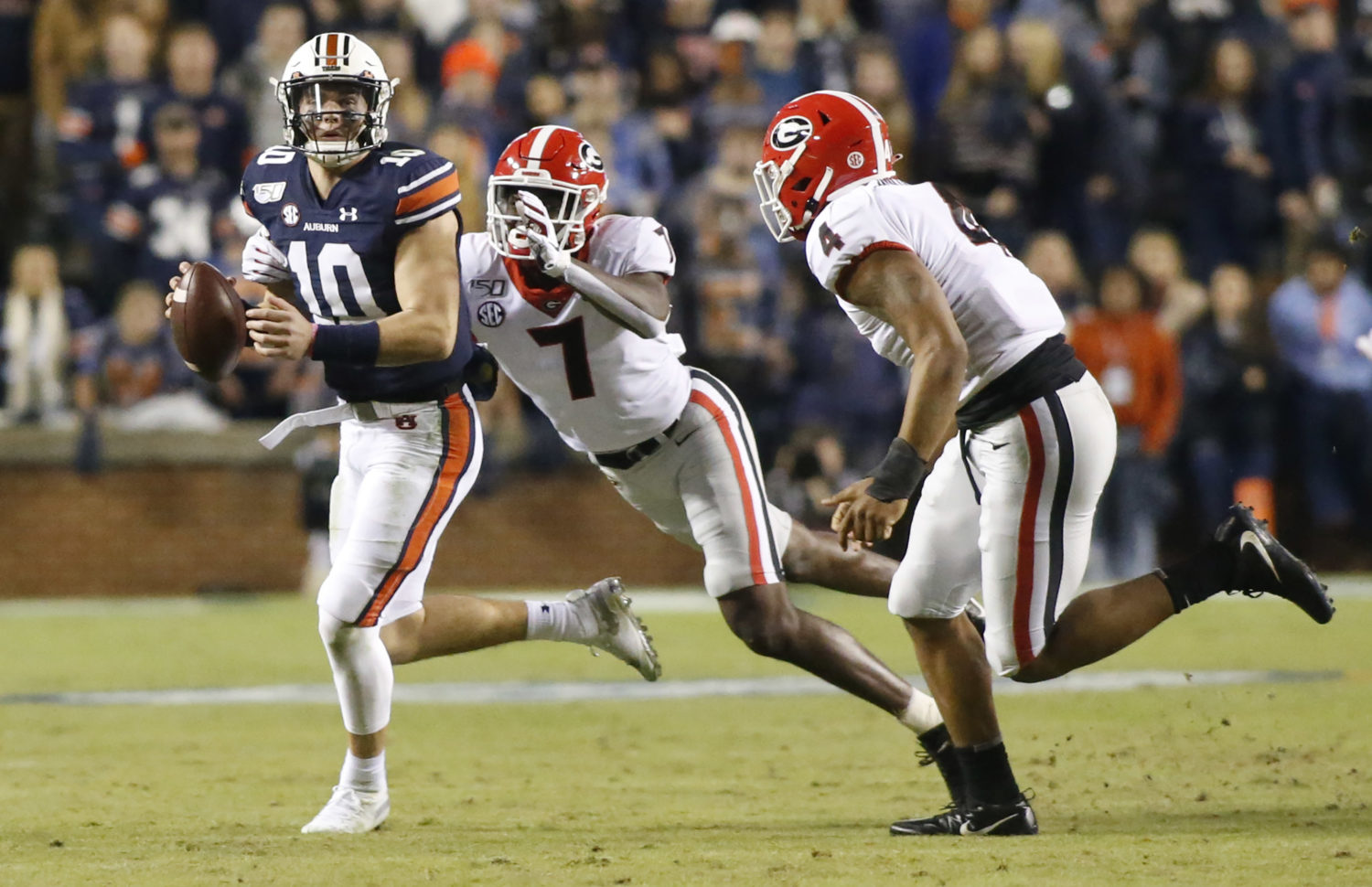 Freshman quarterback Bo Nix was asked to do simultaneously too much and too little. Photo by: John Reed-USA TODAY Sports

Of course, the final score will tell a different story. The Auburn defense — bless it for not giving up — gave the Tigers a chance, and Georgia, once settling into safety defense situations, gave up two scores to the Tigers. It was close to being a major comeback, and if Nix had hit his running back on that crucial fourth down, we could be talking about history.

Yet don’t allow those 14 points to distract you from what went on during the first three quarters. Malzahn, once again, let down a defense that will be discussed for years on the Plains as a “what if we had an offense,” and he lost, once again, to a top-10 team, and, once again for the last time, he was bested by the rival Bulldogs. This puts him at 2-7 against Georgia, not exactly what you want from a head coach.

The price tag to get rid of Malzahn is a hefty one, but at this point, you have to ask: Would it be worth it? There will be some successful coaches out there looking for their big chance or another opportunity in the SEC. Will Auburn make a bold move, or will Tigers fans have to wash, rinse and repeat another mediocre season?