I was really looking forward to the Sugar Bowl. With Auburn taking on Oklahoma, the potential was there for an enjoyable game.

But the proceedings were anything but enjoyable, or at least they were for me. The Sooners ended up taking care of the Tigers by a score of 35-19 in New Orleans, yet the scoreboard wasn’t the story as far as I’m concerned.

Two subjects occupied my thoughts more often than not. First, Auburn’s offense completely falls apart when Sean White — limited as he may be from a pure talent perspective — is sidelined. After battling a shoulder injury earlier in the season, he was forced to exit the game after breaking his arm on a quarterback keeper.

Second, Joe Mixon shouldn’t be part of this Oklahoma program. His mere presence was a distraction at the Superdome.

The most talked-about player in college football these days, Mixon is a tremendous tailback. He ran 19 times for 91 yards and 2 touchdowns against a solid Tigers defense, sprinkling in 5 catches for an additional 89 yards.

Stop me if you’ve heard this before: Sooners coach Bob Stoops gave Mixon a second chance and only suspended him for a year.

Video of the episode was recently released. To say the least, it’s deeply disturbing. Similar to the Ray Rice situation in the NFL, the conversation changed with regard to Mixon (below) once the public put eyes on the evidence. 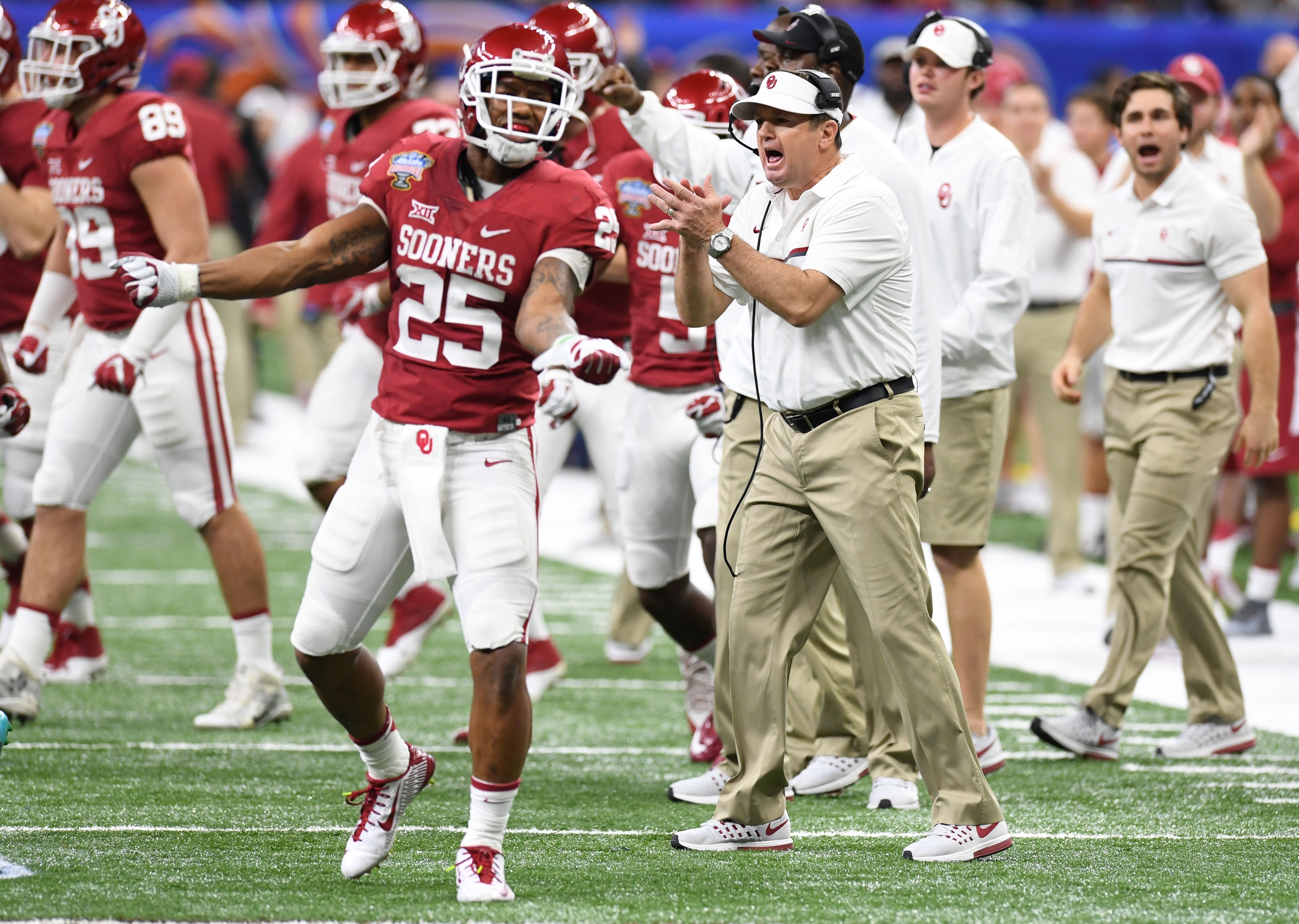 Violence against women on campus has reached a boiling point in this country, highlighted by the serial atrocities (allegedly) committed at Baylor during the Art Briles regime. The Bears were Big 12 doormats for years — 14 straight seasons under .500 from 1996-2009 — but sold their souls to be pigskin powerhouses in the Lone Star State.

Even with Briles pink-slipped in Waco and good guy Jim Grobe taking over on an interim basis, it felt dirty to root for that team in 2016.

That’s the feeling I got watching Mixon toy with Auburn both as a runner and a receiver. No matter how gifted he is, and he’s freakishly gifted, my opinion of him will be forever changed for what he did that fateful night.

Is it unfair to judge a young man — he’s still just 20 years old — based on a singular act? Maybe it is. But when that singular act is so indefensible and so unforgivable in nature, the whole “everyone deserves a second chance” argument sort of goes out the window for me. Mixon didn’t cheat on a test or steal a car. He broke a girl’s face.

Apparently, I wasn’t alone in my disgust. Tigers fans were hostile toward Mixon every time he got his hands on the ball.

The hate from the stands not only fueled Mixon, but it fueled Oklahoma. The nastier it got inside the dome, the better the Sooners played. Clearly, they rallied around their embattled teammate. That’s what players do.

Perhaps the only thing more uncomfortable than hearing Auburn backers chant “HE HITS WOMEN! (clap, clap, clap-clap-clap)” — Mixon was even egging them on at one point — was the Sooner supporters cheering his every gain. Among them, no doubt, were mothers and fathers. Mothers and fathers of college-age women. They’ll sleep soundly tonight, too.

You see, Mixon was balling out for ole State U. School pride trumps right and wrong. That’s what fans do. 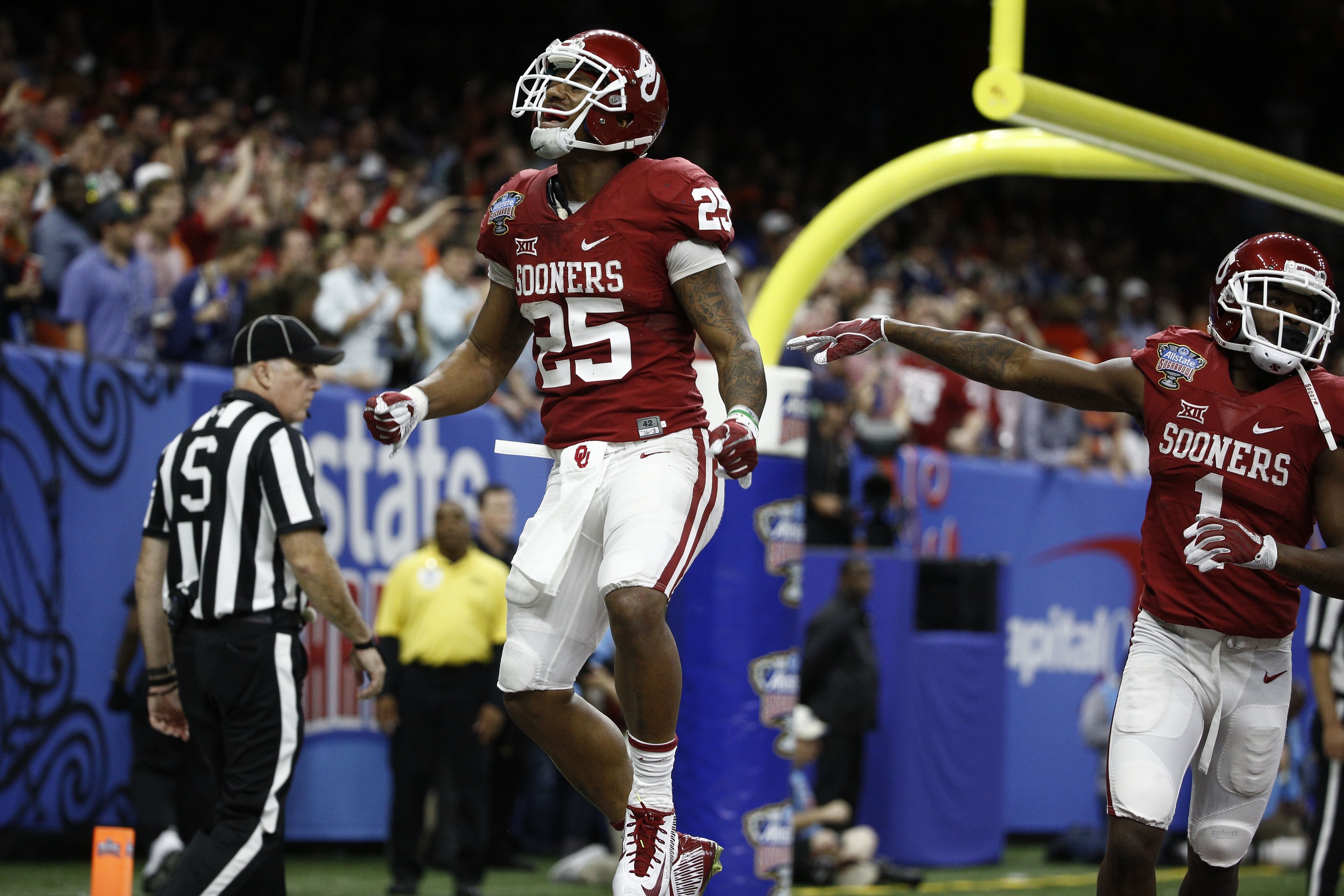 ESPN’s broadcasting duo of Brent Musburger and Jesse Palmer was put in an impossible situation. If they talked about the Mixon (above) ordeal, they’d ruin a football game. If they didn’t, they’d let a criminal act skate.

Musburger — now 77 years old and obviously in the IDGAF stage of his career — gushed about Mixon at the beginning of the contest. Only loosely did he refer to what made Mixon persona non grata in the first place. Yes, this was a football game, not a town hall. The elephant in the room needed to be addressed, though.

Instead, Musburger chose to talk about Mixon’s prospects as a pro, as if that would somehow make for a happy ending.

“He’s just one of the best,” he raved, “and let’s hope, given a second chance by Bob Stoops and Oklahoma, let’s hope this young man makes the most of his chance and goes on to have a career in the National Football League.”

To say the least, the all-powerful Twittersphere did not take kindly to Musburger’s handing of the Mixon mess. With a producer in his ear freaking out over the social-media meltdown he’d caused, the veteran broadcaster went into full rant mode.

“You know, Jess, apparently some people were very upset when I wished this young man well at the next level. Let me make something perfectly clear: What he did with that young lady was brutal, uncalled for. He’s apologized. He was tearful. He got a second chance. He got a second chance from Bob Stoops. I happen to pull for people with second chances, OK? Let me make it absolutely clear that I hope he has a wonderful career and he teaches people with that brutal, violent video, OK? Second down and nine.”

Musburger was annoyed. He did little to hide that fact. As if it was somehow beneath him to respond on the air to all the millennials — not to mention fellow media members, of which there were many — criticizing him for how he handled the Mixon angle. His attempt to repair his original comment only did more damage.

The game was over at that point. I muted my television. Mixon ruined the Sugar Bowl for me, and then Musburger ruined it again.