This weekend’s Arkansas-Auburn game is one of three SEC matchups between Top 25 teams on Saturday. The Tigers will try to add to their three-game winning streak while the Razorbacks will attempt to build upon their 34-30 home victory over Ole Miss last week.

Here’s a look at how the teams match up Saturday night at Jordan-Hare Stadium (6 p.m. ET, ESPN):

WHEN AUBURN HAS THE BALL

QB Sean White vs. Arkansas pass defense: White continues to be the SEC’s most accurate passer, completing 69.7 percent of his attempts for 1,187 yards, 6 touchdowns and 2 interceptions. Despite White’s pedestrian numbers, his high completion percentage has helped him become the conference’s top-rated passer as well. 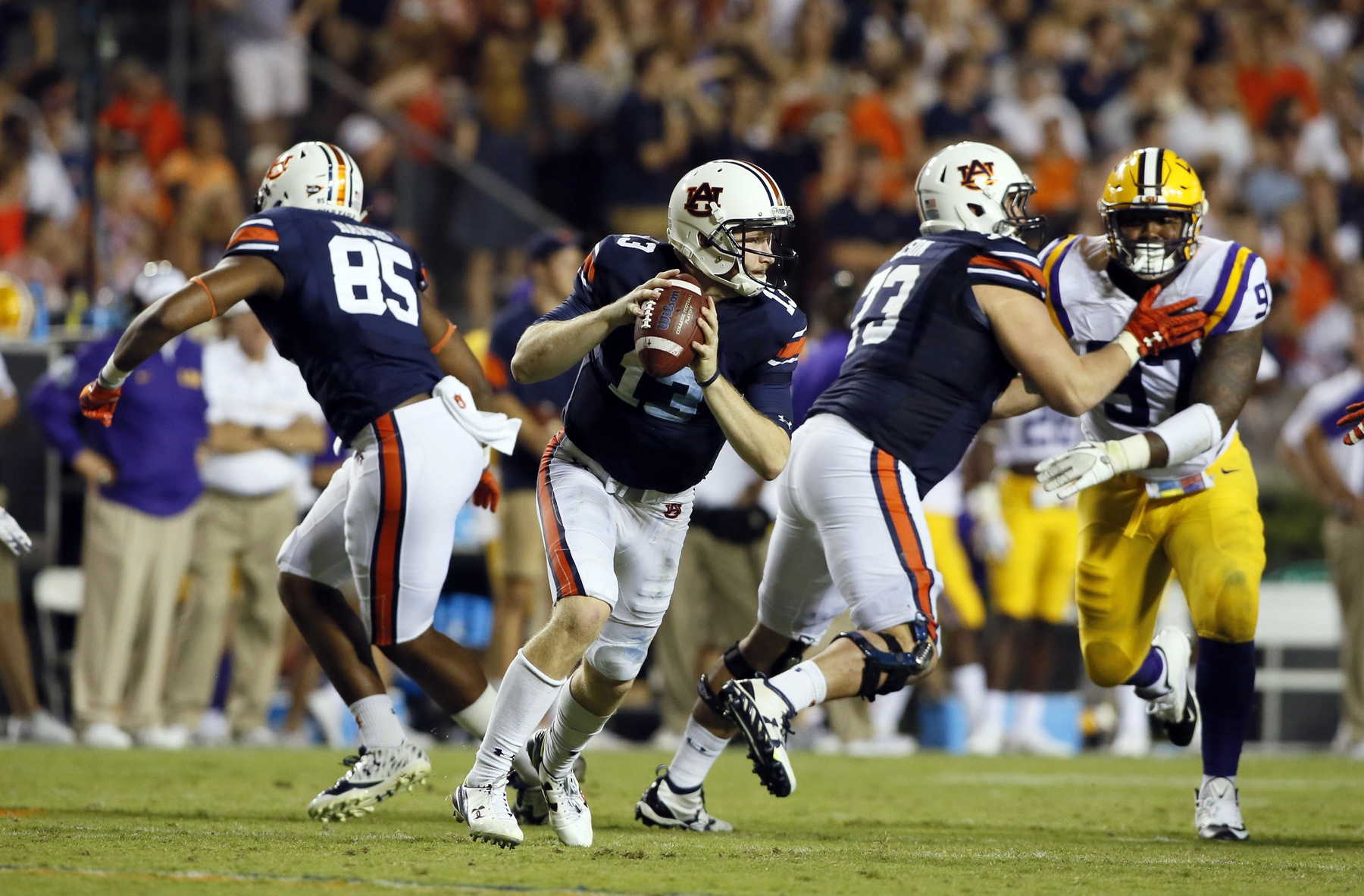 White has rushed 38 times for just 52 yards and a score. But the rest of his teammates have more than made up for that by helping Auburn average 262.8 rushing yards per game, which is third in the SEC.

The Razorbacks are seventh in the SEC against the pass, allowing 223 yards per game. Sophomore cornerback Ryan Pulley (25 tackles) leads the SEC with 9 pass breakups and shares the conference lead with 10 passes defended while junior free safety Josh Liddell tops the Razorbacks’ secondary with 33 stops.

A very efficient and accurate White is going up against a middle-of-the-pack pass defense. The Tigers’ signal-caller gets the nod.

RB Kamryn Pettway vs. Arkansas run defense: Pettway has been solid so far this season, ranking fourth in the SEC in rushing yards per game (101) and ninth in rushing yards (505) in only four games. He also has 4 rushing touchdowns.

It remains to be seen whether Auburn’s Kerryon Johnson (538 yards, 6 rushing TDs) will face the Razorbacks. The sophomore spent the Tigers’ bye week recovering from an ankle injury he suffered on Oct. 8 against Mississippi State.

The Hogs are ninth in the SEC against the run, allowing nearly 176 yards per game. They have also surrendered the most rushing TDs (17) in the league and are yielding an SEC-worst 5.6 yards per carry.

WR Tony Stevens vs. Arkansas pass defense — Stevens’ production this season has been impressive for a team that passes only 31 percent of the time. He ranks seventh in the SEC in receiving yards and receiving yards per game (68).

Stevens has been very consistent since Auburn’s season-opening 19-13 loss to Clemson in which he had just 1 catch for 16 yards. He’s had at least 3 receptions and at least 58 yards in every game since.

Considering how bad the Razorbacks have been against the run, it would be surprising if White threw more than 20 passes on Saturday night. Nevertheless, if Arkansas manages to shut down Stevens, White has more than capable targets in any of the three Davises.

We don’t expect White to exceed 200 passing yards in this one.

QB Austin Allen vs. Auburn pass defense: Allen leads the SEC in passing TDs (18) and passing yards (1,861). He also has the conference’s second-best passer rating behind White and is third in the conference in completion percentage (63.0).

When it comes to Allen’s legs, the Tigers have nothing to worry about. The 6-foot-1, 209-pound junior has lost 49 yards on 34 rushing attempts. 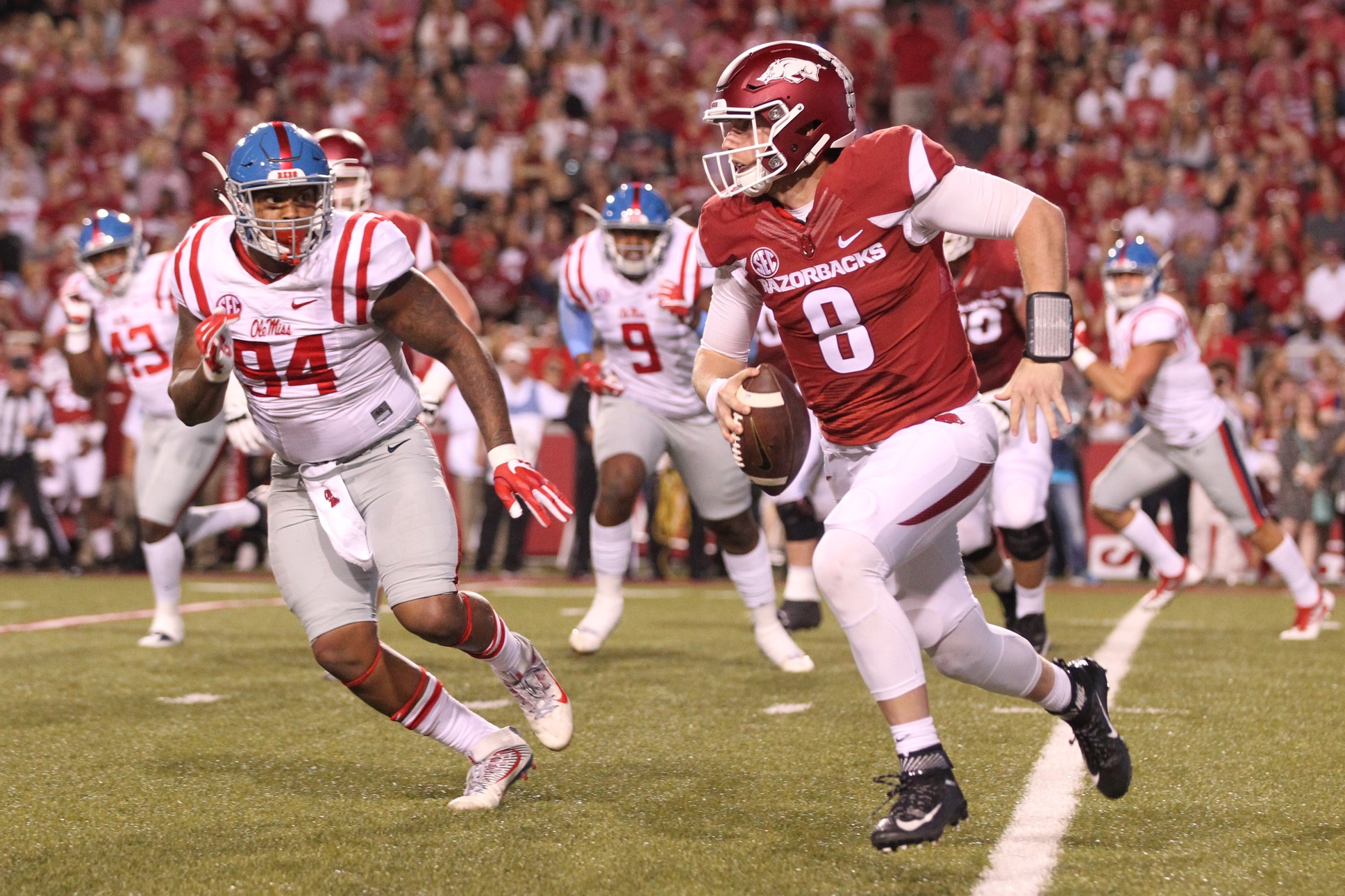 Auburn has been excellent so far against the pass, allowing 199.7 yards per game to rank third in the SEC. With 6 interceptions, Allen is tied for the second-most picks in the league, which is something Auburn will try to exploit despite being last in the league with only 3 INTs.

It’s a matchup between one of the best quarterbacks in the SEC going up against one of its top pass defenses.

RB Rawleigh Williams III vs. Auburn run defense: For his performance against Ole Miss, Williams was named the SEC offensive player of the week. The sophomore rushed 27 times for a career-high 180 yards in Arkansas’ 34-30 victory over the Rebels.

Auburn has struggled against the run, allowing 147 rushing yards per game to rank sixth in the SEC. After yielding 231 rushing yards against Texas A&M and 220 in its 18-13 win over LSU, Auburn was outstanding in its last game, yielding just 103 yards on 33 carries in a 38-14 victory over Mississippi State.

Surprisingly, despite having Williams and Whaley in their backfield, Arkansas is only ninth in the conference in rushing yards per game (179.7). Still, the Razorbacks’ running game will be tough to stop.

WR Jared Cornelius vs. Auburn pass defense: Cornelius leads Arkansas in receiving yards per game (74.7), but he’s one of several members of one of the best receiving corps in the SEC. Cornelius is second on the Razorbacks with 4 receiving TDs; Keon Hatcher (21 catches, 354 yards) leads the team with 5 and is complemented by Drew Morgan (team-leading 37 receptions, 378 yards).

The Hogs have the toughest passing game Auburn will have faced this season. But AU cornerbacks Carlton Davis and Joshua Holsey along with safeties Tray Matthews and Nick Ruffin and nickel back Rudy Ford should be up to the task.

A Lou Groza Award finalist last season and arguably the best placekicker in the country, Daniel Carlson leads the SEC in made field goals (13) and field goal percentage (92.9). Arkansas has split its place-kicking duties between sophomore Cole Hedlund (4-of-6 on field goals) and senior Adam McFain (3-for-3), who has assumed a role over the last two games.

The Razorbacks’ Toby Baker is second in the SEC with an average of 47.3 yards on 24 punts. Auburn’s Kevin Phillips is averaging 40.5 yards on five fewer punts.

Arkansas’ Dominique Reed is ninth in the conference in kickoff return average (17.9) while Ford is 10th (16.7). Auburn has allowed 21.3 yards per kickoff return to rank seventh in the SEC. Arkansas is 11th in the same category.