After all that bad football, atrocious SEC East down to Florida, Tennessee

Coming into Week 11, the possibility of a six-way tie atop the East was still mathematically possible. Only Missouri was eliminated.

Thankfully, we’re now down to two. With Florida taking care of South Carolina and Tennessee doing the same to Kentucky, the Gators and Volunteers have again separated themselves from the pack in the SEC’s lesser division.

One of the stories coming into the 2016 campaign was the continued dominance of the West over the East. If the best conference in America was truly going to be all it can be — meaning multiple teams getting into the College Football Playoff — then the East needed to take a step forward and be more competitive.

That clearly hasn’t happened. Tennessee and Florida, the best the East has to offer, are a combined 0-3 against the West this season.

In a game that was optional for rushing defense, the Volunteers declawed the Wildcats 49-36 at Neyland Stadium. Even in defeat, UK ran 55 times for 443 yards facing a UT defensive squad that’s been bruised and battered.

Fortunately, the Vols ran for 376 yards themselves on 41 carries — nobody in Knoxville misses Jalen Hurd, apparently — and saw tailbacks Alvin Kamara and John Kelly and quarterback Joshua Dobbs all run for 94 or more. Dobbs was also 11-of-17 passing for 223 yards and was responsible for 5 total touchdowns.

Tennessee moved to 7-3 on the year, although all three of their losses are in league play. They finish with Missouri and Vanderbilt.

The Gators, on the other hand, continued to lean on their defense in a 20-7 victory over the Gamecocks that was more dominant than the final score suggests. UF held the ‘Cocks to 256 total yards of offense. 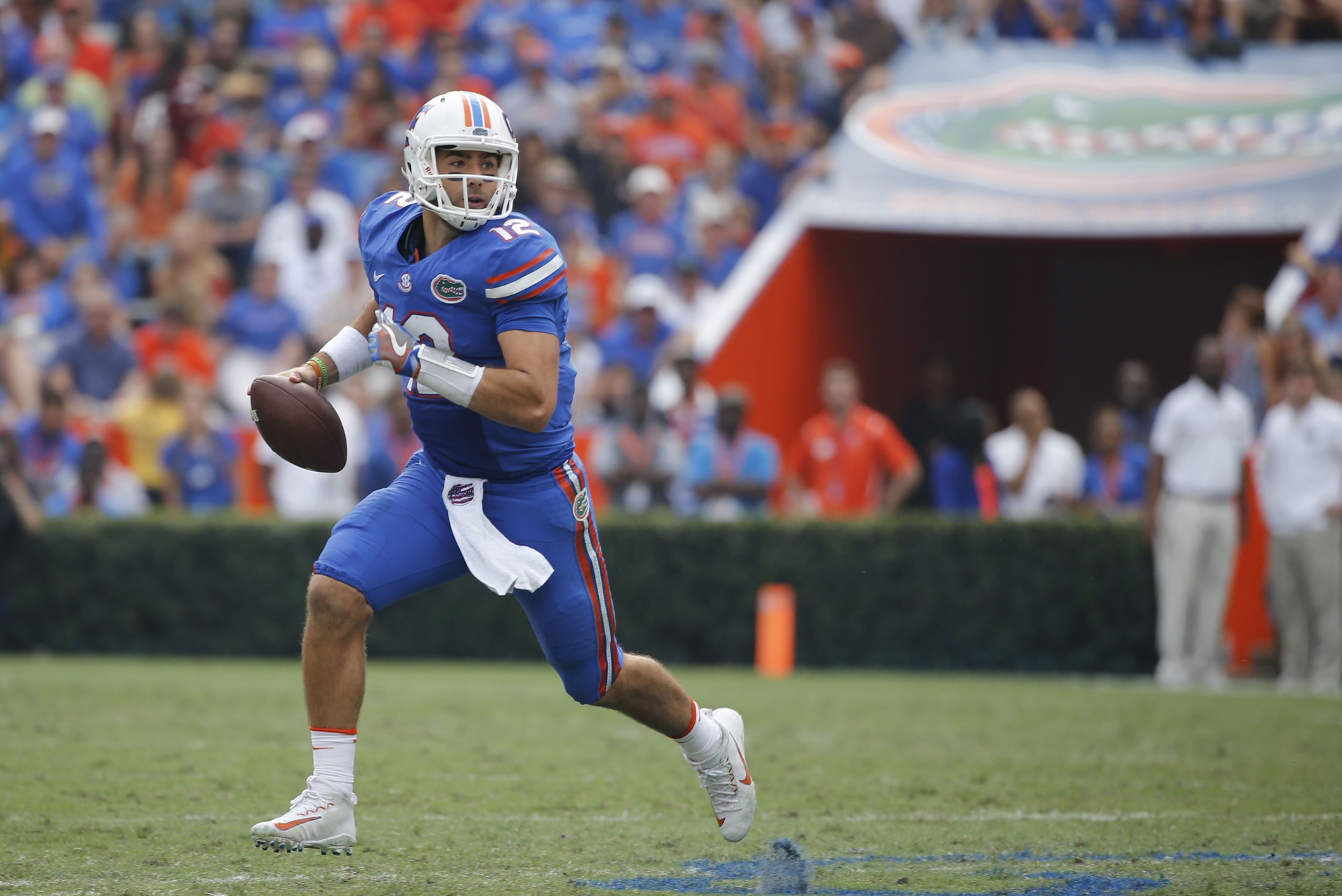 Starting in place of the again-injured Luke Del Rio, Austin Appleby (above) was relatively sharp on 17-of-21 passing for 201 yards with 2 TDs and 1 INT. Most of his work came in the first half — there wasn’t much of a need to throw it after intermission — as Jordan Scarlett did the heavy lifting late with 134 yards on 20 carries.

The Gators are now 7-2 and finish their SEC slate in Week 12 at LSU. A win in Baton Rouge gives them the East title.

Getting back to the Volunteers, they’re no longer collectively walking around like Atlas with Hurd on their shoulders. Coincidence or not, UT has looked the best it has all year offensively since the All-SEC tailback quit.

True, Tennessee Tech didn’t provide much competition a week ago, but 55-0 is worth noticing from a team that struggled mightily at times earlier in the schedule with the likes of Appalachian State and Ohio. Kelly — getting his first career start with Kamara out — ran for 104 yards and a score on only 7 carries.

The ‘Cats had been playing pretty well recently and were a quality opponent, but the Vols ran up and down the field from start to finish.

Always a bit of a question mark offensively, especially after laying an egg the previous Saturday in Fayetteville, Florida can play D. The Gators sacked South Carolina quarterback Jake Bentley 5 times and also picked him off once.

It’s going to take more than great defense to win in seven days at Death Valley. Despite the fact that LSU running back Leonard Fournette was shut down in Week 10 by Alabama — for the second year in a row, mind you — he ran for 180 yards and 2 touchdowns in 2015 against another UF team loaded with defensive standouts.

Even if the Gators lose to the Tigers, they’re still alive. Tennessee would need to beat Missouri and Vanderbilt to advance to Atlanta.

One way or another, the East will be a heavy underdog in the SEC Championship Game no matter the representative from the West. Alabama and Auburn remain in the hunt, meaning the Iron Bowl is shaping up to be another classic. 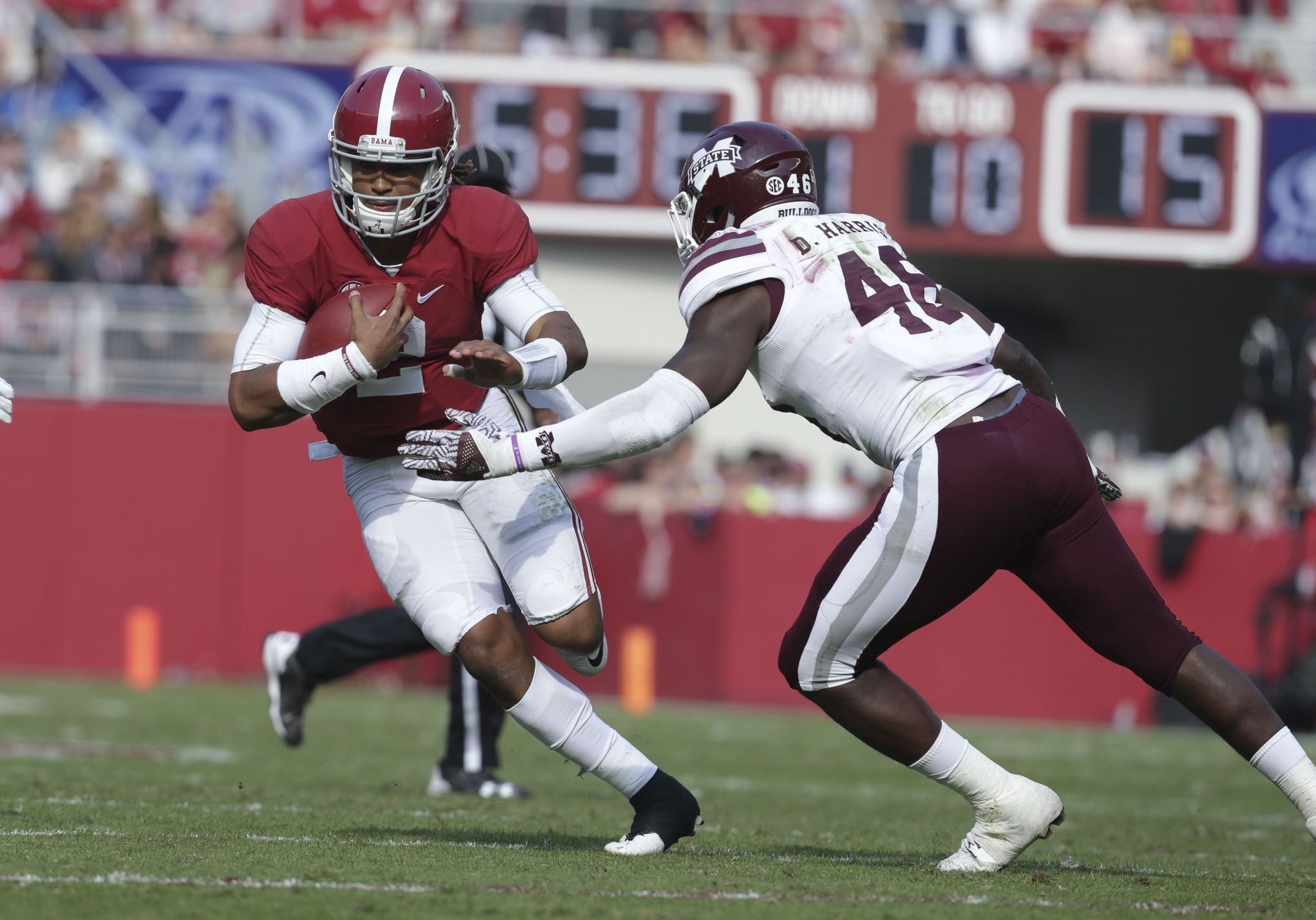 Alabama has been No. 1 all season and — even as the defending national champion — seems to be better than ever. Facing a Mississippi State squad coming off an upset of then-No. 4 Texas A&M, the Crimson Tide neutered the Bulldogs 51-3 in Tuscaloosa. Quarterback Jalen Hurts (above) threw for 347 yards and ran for 100 more.

As for Auburn, after a 1-2 start, coach Gus Malzahn and Co. are as hot as any ballclub in the nation the way they run the rock.

If anything, the disparity between the East and West is as wide as ever. In its two crossover contests this season, Tennessee fell at Texas A&M in double overtime and then got totally embarrassed at home by ‘Bama.

Florida lost at Arkansas by three touchdowns and still has the LSU matchup looming next week. The East owns exactly one win over the West in 2016, as Kentucky topped Mississippi State — the worst team in the division, of course — by a narrow 40-38 margin in Lexington. The rest of the East is 0-fer the West.

Assuming we have no upsets along the way, the de facto SEC title game is the Saturday after Thanksgiving, when Alabama hosts Auburn.

Even though the Volunteers and Gators both won by double digits at home against inferior opposition Saturday, there’s no reason to assume that the East is narrowing the gap with the West. The Tide are on an entirely different plane, naturally.

But beyond that, an Ole Miss team that’s in danger of missing out on a bowl game — even before quarterback Chad Kelly was sidelined for the rest of the year due to injury — ripped Georgia limb from limb by 31 points. The Rebels are going nowhere in the West. The Bulldogs were alive in the East as of this morning.

Four teams are no longer in the mix for the East based on the results of Saturday’s noon kickoffs, but the two still alive aren’t West-worthy.

John Crist
John Crist is an award-winning contributor to Saturday Down South.
RECENT ARTICLES
FLORIDA
Kaiir Elam responds to question about potential of declaring for NFL Draft following 2021 season
FLORIDA
Florida men's hoops team lands commitment from 4-star forward out of California
FLORIDA
Besides the obvious, here's why Dan Mullen's optics could get even worse in Jacksonville
FLORIDA
4-star recruit, the No. 12 cornerback in class of 2022, announces he has de-committed from Florida