More than a game: Cocktail Party part of fabric of life for Florida and Georgia fans

Late last week, my editor asked me to write about what the Florida-Georgia rivalry meant to me, a Florida alumnus who grew up in Atlanta, the son of a native Floridian father and a mother from Jacksonville who now calls Atlanta “home.” My editor wanted to know, I think, what makes this game so special, and why a simple subject like whether to keep the World’s Largest Outdoor Cocktail Party in Jacksonville incites such unusually high passions, even in a part of the world where fan passions run so deep college football weekends begin on Thursday nights and people insist, without a hint of irony, that God him or herself favors their football teams.

This heightened passion and religious reverence are instilled at a young age. “God smiled on the Gators today,” Steve Spurrier, canonical saint of southern sidelines, used to frequently say after many of Florida’s wins that brightened my childhood.

One time, when the Gators suffered a rare loss (to Patrick Nix and Auburn), I asked my father if God hadn’t smiled on the Gators that day.

“God,” Dad said plaintively, “expects you not to throw 5 interceptions.”

This is the devout world of SEC Football I grew up in, so why then, is Florida-Georgia different?

This seems like a dream assignment, until you get to the actual writing, wherein a 30-something year old man and father tries to put into words in public what I’m not sure I can fully articulate in private. What follows, then, is an act of faith.

The Cocktail Party is such a divisive rivalry the institutions involved can’t even agree on how often it has been played.

According to the Florida side, the first Florida-Georgia game was played in 1915 in Jacksonville and was won comfortably by Georgia.

Georgia’s historians dispute this, claiming that the schools played in 1904, a complicated historical contention given the 1904 game would have occurred 2 years before Florida officially began playing football. Unconcerned with Florida’s football history, Georgia insists it won the first game between the two schools in 1904 by the lopsided score of 52-0.

Whether it was 1904 or 1915, by the time Georgia and Florida teed it up in football, my relatives (on my Dad’s mother’s side) had been in Jacksonville for decades, having arrived in the north Florida town shortly after their homes were destroyed during Sherman’s March to the Sea. They came to Florida to build a new life, and eventually, a football game became part of the fabric of it.

In our family, the Florida-Georgia game is part of growing up.

For my mother, Florida-Georgia is personal too.

The first in her family to attend college, she arrived at the University of Florida from Jacksonville in 1974, blonde, beautiful and brainy. She moved to Jacksonville from State College, Pennsylvania, as a child and due to those western Pennsylvania roots, grew up in a home that appreciated big time college football. By the time she arrived in Gainesville, she could distinguish the midline option from the wishbone and talk ball with most anyone.

The Gators had some terrific football teams under Doug Dickey but couldn’t figure out how to beat Vince Dooley and Georgia, who upset top 10 Florida teams twice in my Mama’s time at UF, again spoiling Florida’s shots at SEC championships. These losses took their toll on Gators fans’ psyches, and my Mama is one of many Florida alumni from that generation who still consider Georgia public enemy No. 1.

A sweet southern woman with a disposition suited for a Sunday school teacher, she still sends me a “To Hell with Georgia” text message the week of the Georgia game, almost as if reciting a catechism.

When Georgia wins the Cocktail Party, as has been the case in the past 2 seasons, her neighbor in Newnan, Georgia, flies his Georgia flag all year from a flagpole Mama insists he installed specifically to face her back porch. “Just wait until Mullen gets Kirby,” Mama told me this summer as we grilled steaks and vegetables. “I’ll fly the Florida flag in sun, rain, sleet and hail.” I have no doubt this is true.

I attended my first Florida-Georgia game in 1998, when my Mom’s Dad, whom I called Pop Pop, gave me 2 tickets for my birthday. Pop Pop worked long days as a respected mechanic in Jacksonville, and people took their cars from miles to his shop in Mandarin — now one of the largest areas of Jacksonville, but when he settled there, basically a collection of cow pastures. I knew how proud he was to give me those tickets and was sure to heed his only instruction: “Make sure you bring your Mama, and don’t tell her I got you the tickets.”

It wasn’t much of a game, rainy and cold and Georgia played much of the game with a running back, Patrick Pass, at quarterback. The Gators were leading comfortably and I was cold and wet just after Florida fans sang “We are the Boys of Old Florida” together in between the 3rd and 4th quarter. I don’t remember much of the game, but I remember the glare I got from Mama when I suggested we leave early. Florida won 38-7, and we didn’t miss a snap.

I’ve seen some great Florida-Georgia games with my Dad and sister, too. 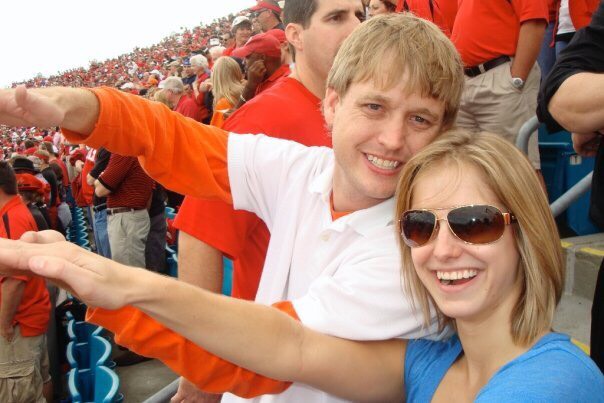 We were there for Lito Sheppard’s game-changing interception in Florida’s win in 2001, Spurrier’s last game in the rivalry as Florida’s head coach. We screamed in horror when Georgia charged into the end zone to dance in 2007, the first time I ever saw the Gators lose to Georgia in person. Two years later, my sister and I saw Tim Tebow break Herschel Walker’s SEC rushing touchdown record sitting together in the Georgia section. The Dawgs fans were less than amused, but they had cleared out by the 4th quarter.

I remember and have seen plenty of great Florida-Georgia games, I suppose, but mostly I remember the people or a party or a drive into Jacksonville on a Friday evening.

Florida-Georgia is when my Dad introduced me to Southern Accents, still my favorite Tom Petty record. My sister got married on a Florida-Georgia weekend, a reason to object to the union in many Florida and Georgia families but one that ended up sparing our family — at least up close and personal — from the heartbreak of Jordan Reed’s fumble at the goal line in 2012. Florida-Georgia was also the weekend when I could always meet up on Friday with Chuck Patterson, my Dad’s fraternity brother and close friend and the man I called, only half-joking, my Uncle Chuck.

Chuck was like family to me, and Florida-Georgia was Chuck’s masterpiece.

Every year for 20 seasons, he’d host a Friday night bonfire and clambake at his lake house in Arlington. In college, this was a hit among my friends, and a safe and fun way to soak in the weekend. Chuck would take everyone’s keys early Friday night and open his house to anyone who wanted to stay, no questions asked. For several seasons, Uncle Chuck and I were the last guys awake — and the first to wake up — two grown up kids celebrating their football version of Christmas.

In 2002, my Dad couldn’t make the trip to Jacksonville, so I made the drive up from Gainesville, where I was a student, and went with Chuck. We sat on the Georgia side for a tense game, which wasn’t decided until Florida’s All-American quarterback, Rex Grossman, led the Gators on a 89-yard game winning drive in the 4th quarter. Georgia had come into Jacksonville ranked in the top 5 and unbeaten, and with Spurrier gone, their fans had chirped a lot in the parking lots. When Florida won, the legendary Larry Munson’s call played on the Georgia side of the stadium:

Smiling, and remembering all the talking Georgia fans did before the game, Chuck waltzed proudly down the ramps of the stadium, imitating the great Munson and yelling: “They’ve broken our hearts again.” Two Georgia coeds, tears flowing and mascara running, exchanged pleasantries with Uncle Chuck, who promptly stopped, pulled out a handkerchief, and offered to dry their tears. “Don’t worry ladies,” Chuck said. “There will always be another Cocktail Party.”

Chuck’s last Cocktail Party was in 2014, another surprising Florida win.

He looked frail that afternoon, and I suppose, had I known I’d never see him again, I would have thought of something better to say when I left his customary tailgate spot after the game.

“How did we beat those guys?” Chuck asked, flashing a toothy grin.

“Like a damn drum,” I said, and hugged him goodbye.

Chuck died the next spring. He loved the Boy Scouts, smoking dozens of Turkeys for the needy at the Legion every Thanksgiving, his lakehouse and good bourbon. Most of all, he loved Florida-Georgia, just like me.

Preparing to write this piece, I scoured through drawers and old college photos and eventually, I found and dusted off Grandmama’s letter once more. One line in particular still stands out: “I remember when the Gators won, but mostly, like you and your Dad on Saturdays in the autumn, I mostly remember football because I was spending time with my Daddy.”

The truth is, football season in our family, and in many families in the South, is less about the games and more about an excuse to spend time together.

We long for championship seasons, of course, but even at proud programs like Florida and Georgia, they grace us rarely, if ever.

That’s OK, and I keep that letter from my Grandmama to remind me of that every football season.

To me, Florida-Georgia is about football, but mostly, it’s about congregating with friends and our extended football families, taking time to break bread, have a beer or a bourbon or a cup of coffee and, whatever the frenetic pace of life at that moment, finally take a deep breath and talk.

The game matters, of course — and this season, what happens on the banks of the St. John’s River matters even more than usual. The winner will control the East and their Playoff fate. The loser will stumble out of TIAA Bank Field wondering what happened and why God didn’t want them to win.

The coming week ahead will feel like an eternity, the winding back of an emotional slingshot that come Saturday will be drawn back, launching one fan base into the stratosphere and another into the pits of despair as the band breaks.

Someone will lose, of course. They will lose and trudge back to their cars and hotels and the air will feel heavier and the drive home longer. The pain will be deep and it will take something spiritual, a devout belief that next time will be better, to recover from it.

But as Uncle Chuck said, there will always be another Cocktail Party.

Neil Blackmon
Neil Blackmon covers Florida football and the SEC for SaturdayDownSouth.com. An attorney and two-time graduate of the University of Florida, he is a member of the Football Writers Association of America. He also coaches basketball. You can follow him on Twitter @nwblackmon.