College football returned to our TV screens on Saturday night and, boy, were fans ready for it.

On Sunday morning, ESPN announced that the Florida-Miami game from Orlando was its highest-rated college football game since 2016, drawing an impressive 4.1 overnight rating.

It was also ESPN’s best Saturday opener ever, per a release from the ESPN PR Twitter account: 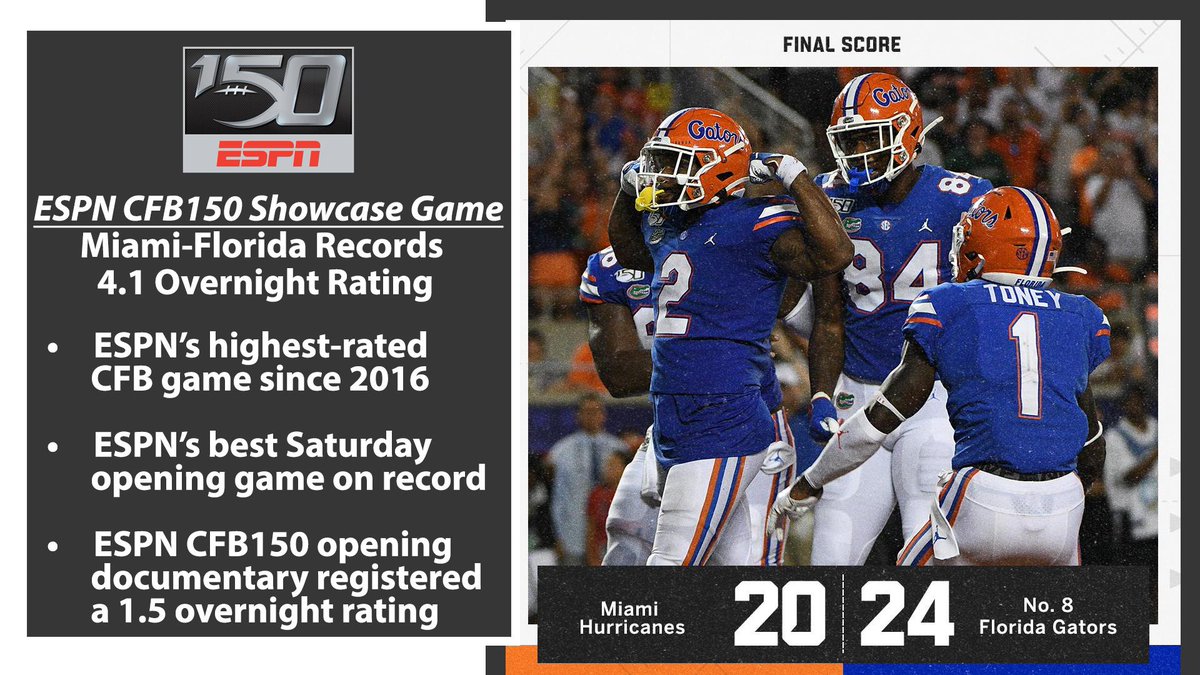 Per the release, the Birmingham market was the No. 1 market in the country, drawing an 18.7 overnight rating. Jacksonville was No. 2 with a 17.0 rating.

The other FBS schools start play this coming weekend, so we’ll see what games draw the biggest ratings. Auburn-Oregon is the primetime game for ESPN.

TRENDING
216,248 READS
Report: Scott Cochran not allowed to say goodbye to Alabama players at meeting
209,050 READS
Kirk Herbstreit offers strong reaction after Scott Cochran leaves Alabama for on-field job at Georgia
152,354 READS
Longtime Nick Saban assistant Scott Cochran reportedly leaving Alabama for Georgia
LATEST NEWS
View All
1 hour ago
Will Muschamp announces several Gamecocks will miss spring camp due to injuries
3 hours ago
Henry Ruggs III says his goal is to break the NFL Combine 40-yard dash record
3 hours ago
Kentucky quarterback Walker Wood announces his transfer from the program
3 hours ago
Jake Fromm has the perfect response to those questioning the size of his hands
4 hours ago
C.J. O'Grady clears the air on the end of his time at Arkansas
4 hours ago
Joe Burrow ends the speculation, says he will play for the team that selects him in 2020 NFL Draft