Final thoughts on Georgia-Auburn ... plus a prediction

Honestly, I had no idea.

Growing up in the Midwest, my childhood wasn’t filled with memories of watching Georgia-Auburn. For me, it was just another matchup of a pair of historic SEC programs. I wasn’t aware of the history of the Deep South’s Oldest Rivalry until I started talking to people like my SDS Podcast co-host Chris Marler — he’s an Alabama fan who always tells me this is his favorite rivalry in college football — and Tony Barnhart, AKA Mr. CFB.

And quickly, I was told of the legendary elements of this fantastic game, like Larry Munson’s calls and Piedmont Park. Little did I know that at the heart of SEC football was this fantastic game. For so many people in the South, this game represents fall.

Perhaps that explains why there was such an uproar when it was announced that these teams won’t meet in November. Starting next year, they’ll meet in October so that Auburn doesn’t have to face Alabama and Georgia at the end the season (with a cupcake sandwiched in between).

For now, though, this game will be in November. And based on what we’ve seen from these teams this year, Saturday should be another memorable chapter in this great rivalry.

Here are some final thoughts I have on that:

We all remember what happened in 2017. It was a bloodbath. Georgia rolled into Jordan-Hare like it owned the place and Auburn, to borrow a phrase from Gus Malzahn, “whipped the dog crap” out of them. 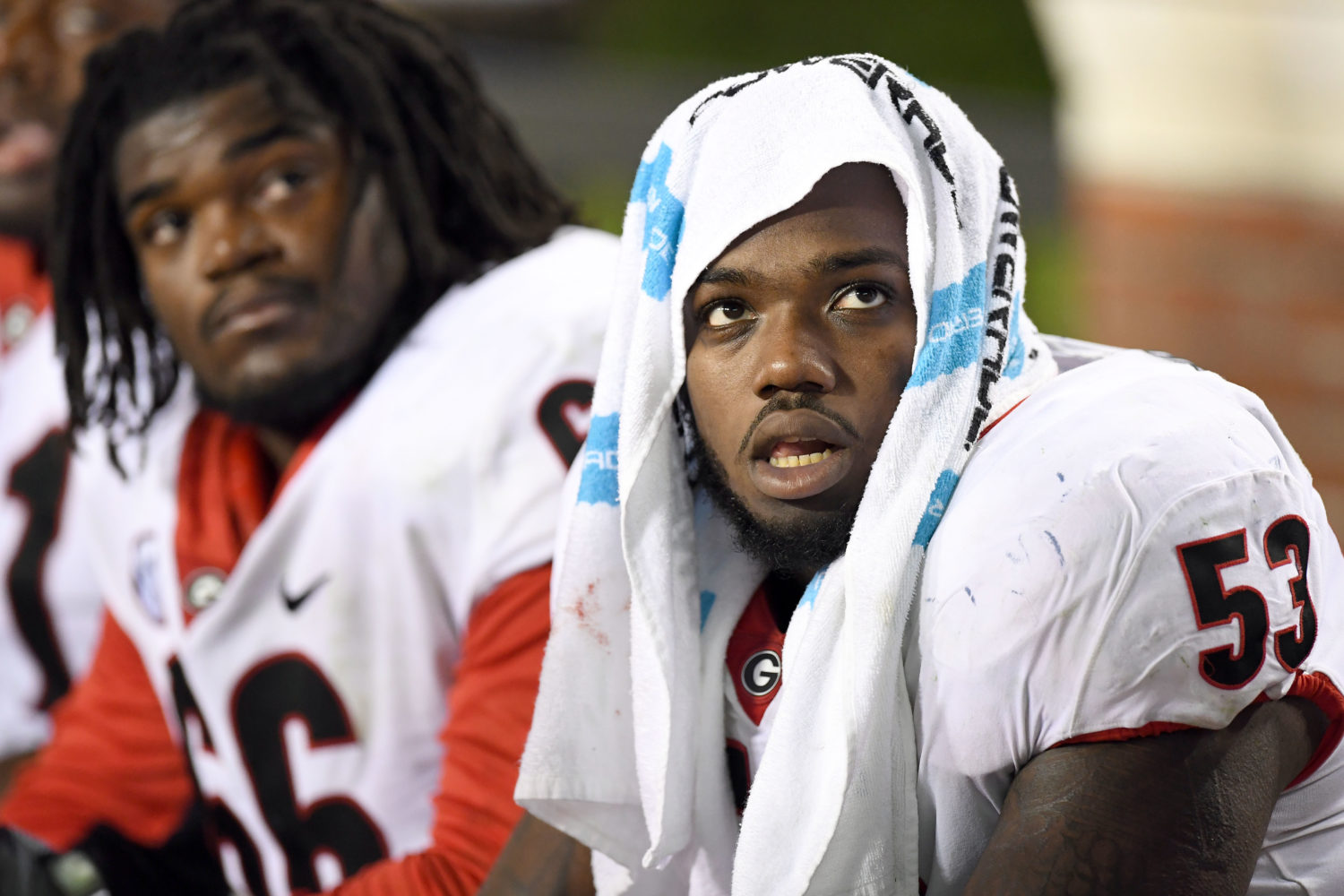 It wasn’t pretty for Georgia when these teams met at Jordan-Hare Stadium in 2017. Photo by: John David Mercer-USA TODAY Sports

Surely there will be plenty of reminders of that on Saturday, as there should be. But it’s a totally different set of circumstances for both teams. Auburn might have two losses, but it doesn’t have a path to the SEC Championship and the Playoff like it did in 2017. Georgia, on the other hand, had a loss to give and the SEC East locked up a couple of years ago. This year, there’s no more loss to give.

In my opinion, that changes things a bit. Not to call out Auburn fans, who were understandably frustrated with the offense a couple of weeks ago against Ole Miss, but it’s a different ballgame when your team is eliminated from the Playoff conversation. There might not be the same sort of juice there was when everything was still in front of Auburn.

2. I worry about Bo Nix against this Georgia defense, and I know Auburn fans do, too

Eeeeeeeeeek. It hasn’t been pretty for the freshman quarterback against quality foes. Florida was a disaster, and LSU wasn’t much better. Sure, the Oregon comeback was impressive, but Nix struggled for most of that game, as well. He got a chance to win it late because of how well the Auburn defense played. 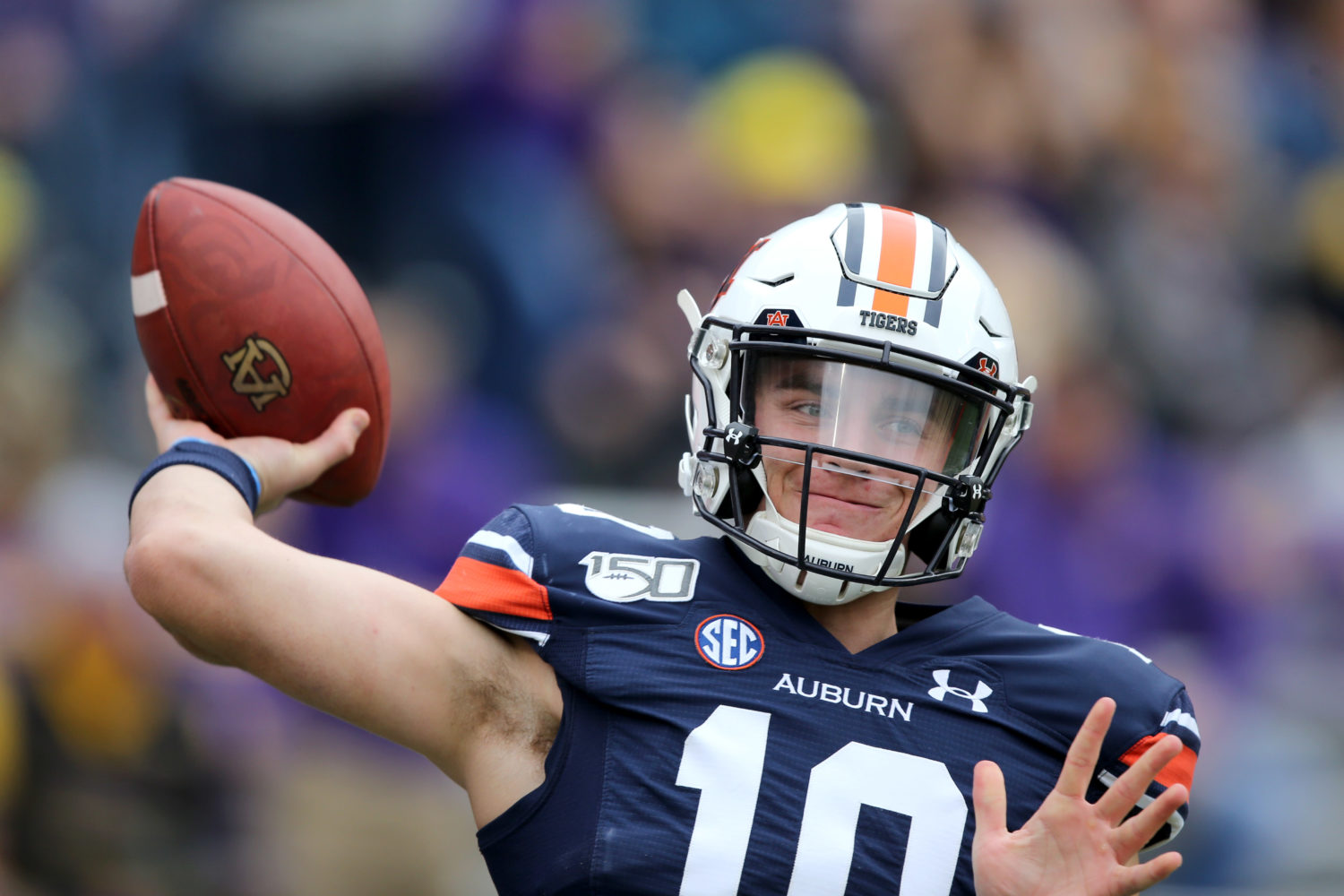 Against this Georgia defense, I worry about that. The discipline it plays with is unmatched. Misdirection doesn’t fool this team, which seems like bad news for an Auburn offense that prides itself on that element. I’d worry about the idea of Nix getting behind the sticks on third down. Georgia can generate game-changing pressure without sacking Nix.

There’s a reason that the Dawgs have yet to allow a rushing touchdown this year. They don’t miss open-field tackles, and they frustrate inexperienced quarterbacks.

Nix can change the narrative in a big way by having his best performance of the season. I certainly wouldn’t bet on that, though.

The aforementioned Nix vs. Georgia defense matchup is part of the reason why this over/under is just 40.5 points (as of Thursday afternoon). In other words, the oddsmakers have this as like a 21-20 game. Even that might be a bit too high. It’s not a bad number, considering Georgia’s two quality wins totaled points of 41 (Florida) and 40 (Notre Dame). Auburn, meanwhile, had a combined average total of 40 points against the likes of Florida and LSU.

Perhaps that explains why this number dropped from 45 earlier in the week. Given how much these offenses have struggled to put their foot on the gas, it’d be surprising to see either light up the scoreboard. Auburn exceeded 28 points against just one Power 5 team, and that was Arkansas, while Georgia did so against the likes of Vanderbilt and Tennessee.

Both of these teams, I’d imagine, are going to try to run the football and keep these talented defensive lines on the field as long as possible. The number of big plays should be at a minimum.

Vegas is expecting a totally different kind of game than LSU-Alabama, and that seems like the most likely scenario.

4. One of the best trench matchups of the year has major injury questions

I’ve been looking forward to seeing the Auburn defensive line against the Georgia offensive line for a while. It’s as good a matchup of fronts as there will be in college football. The problem? Both of these teams are banged up at some key spots.

Auburn’s Marlon Davidson missed the Ole Miss game with tightness in his lower back. He was a late scratch, so one would assume that with a bye week, he’ll be feeling better. Back injuries usually don’t heal quickly, though, so who knows if the All-SEC defensive lineman will be at 100 percent. (Yes, I realize Malzahn said he expected Davidson to be “full throttle” for Saturday).

On the Georgia side, the offensive line has seen a bit of musical chairs this year. Center Trey Hill sustained an ankle injury early against Mizzou but is expected to play on Saturday. While Cade Mays was filling in for Hill at center — which completed his offensive line cycle for the season — he also suffered an ankle injury in the Mizzou game. Coach Kirby Smart said that he’s a go for Saturday, as is Isaiah Wilson, who was sidelined briefly late in the fourth quarter.

The question is, will these talented, veteran-laden groups look like the best versions of themselves?

5. Speaking of injuries, Lawrence Cager needs to be healthy for UGA

Georgia fans were holding their breath when Cager went down with a left shoulder injury on Saturday. That’s the same shoulder he separated earlier in the season. Not ideal.

Even though the star receiver will play on Saturday barring a last-minute setback, will he be able to make catches in traffic and be that invaluable piece that he’s been for Georgia when healthy? Who knows. This is the same guy who said that he would’ve played in the Florida game with a broken leg. 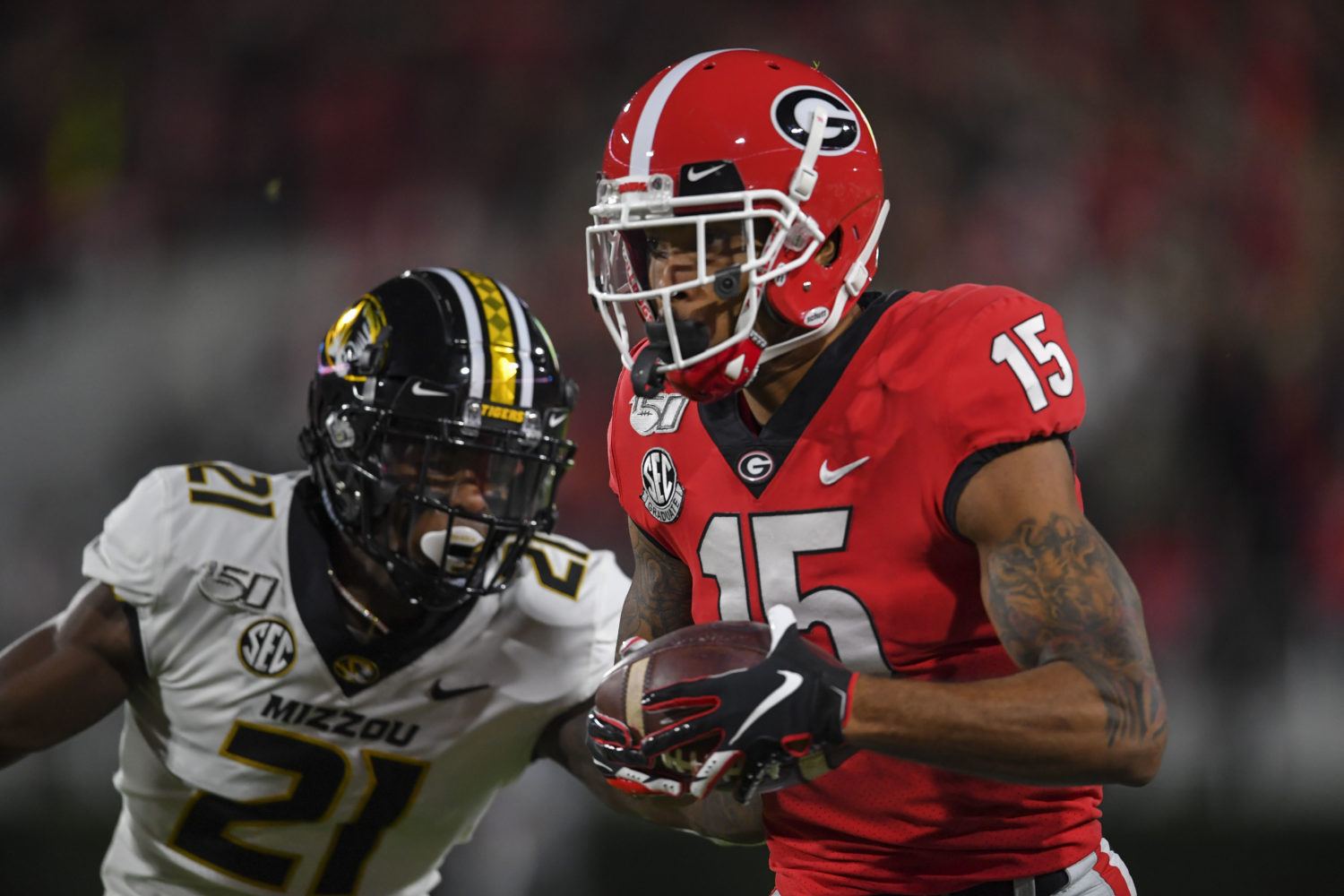 Georgia receiver Lawrence Cager heads into Saturday’s game with questions about the health of his left shoulder. Photo by: Dale Zanine-USA TODAY Sports

Cager is so incredibly important for Jake Fromm and his ability to fit the ball into tight windows, especially on third down. As we saw against South Carolina and Kentucky, this is a different offense without Cager.

The encouraging thing was that George Pickens played extremely well against Mizzou. He would’ve had an even bigger night if a holding penalty hadn’t negated a long touchdown. Pickens has been a bit up and down, but if Cager can just be on the field to get the attention of the Auburn secondary, Pickens looks like he’s capable of capitalizing on some favorable matchups.

This isn’t a game with a massive spread or anything. But I think it’s worth noting that three of the biggest upsets this year in college football had a common denominator. All of them — South Carolina beating Georgia, Illinois beating Wisconsin and Vanderbilt beating Mizzou — involved a team playing for a coach with a murky future.

Could Saturday be a game in which Auburn plays at a different level for Malzahn? I wouldn’t rule that out. Players can sense that.

Malzahn’s future has been and will continue to be a popular topic of conversation. There’s speculation that it could be decided on how well his team plays in these home matchups against Auburn and Alabama. Maybe he doesn’t necessarily need to repeat his 2017 sweep to stick around, but one would think that a pair of single-digit efforts wouldn’t exactly earn him support.

Malzahn came into the year knowing that he was on the proverbial hot seat. He attacked it head on in every way. It’ll be interesting to see how much he can do down the stretch.

That starts on Saturday.

In the preseason, I actually picked Auburn to win this game. It wasn’t entirely due to 2017, but I’d be lying if I said that wasn’t in the back of my mind. I picked that as Georgia’s lone loss for the entire season.

Now, though, I’m changing my tune. I think it’s going to be extremely difficult for this Auburn offense to sustain drives against the Georgia defense. I think this game comes down to which quarterback capitalizes in those obvious passing situations, and for my money, Fromm is the guy I trust.

I expect this to be a slugfest that makes people wonder if LSU and Alabama were playing a different sport last weekend. But I think the Dawgs have found their identity winning these types of games.