Final thoughts on Texas A&M-Georgia ... and a prediction

For the first time ever, a couple of Nick Saban disciples are facing off.

Just kidding. That happens basically every other week in the SEC.

A new rivalry?!?! Eh, probably not. The schools are a solid 900 miles apart, and they’re not even scheduled to play again until 2024. They might compete over the occasional recruit, but it’ll take some big-time fireworks on Saturday to really make this a rivalry.

Nonetheless, I have thoughts about Saturday’s matchup. Many thoughts:

Isaiah Wilson, Cade Mays and Ben Cleveland were all working through injuries the past couple of weeks, but they are expected to play. Smart said that the health of his offensive line is improving after a lot of shuffling the past few games. 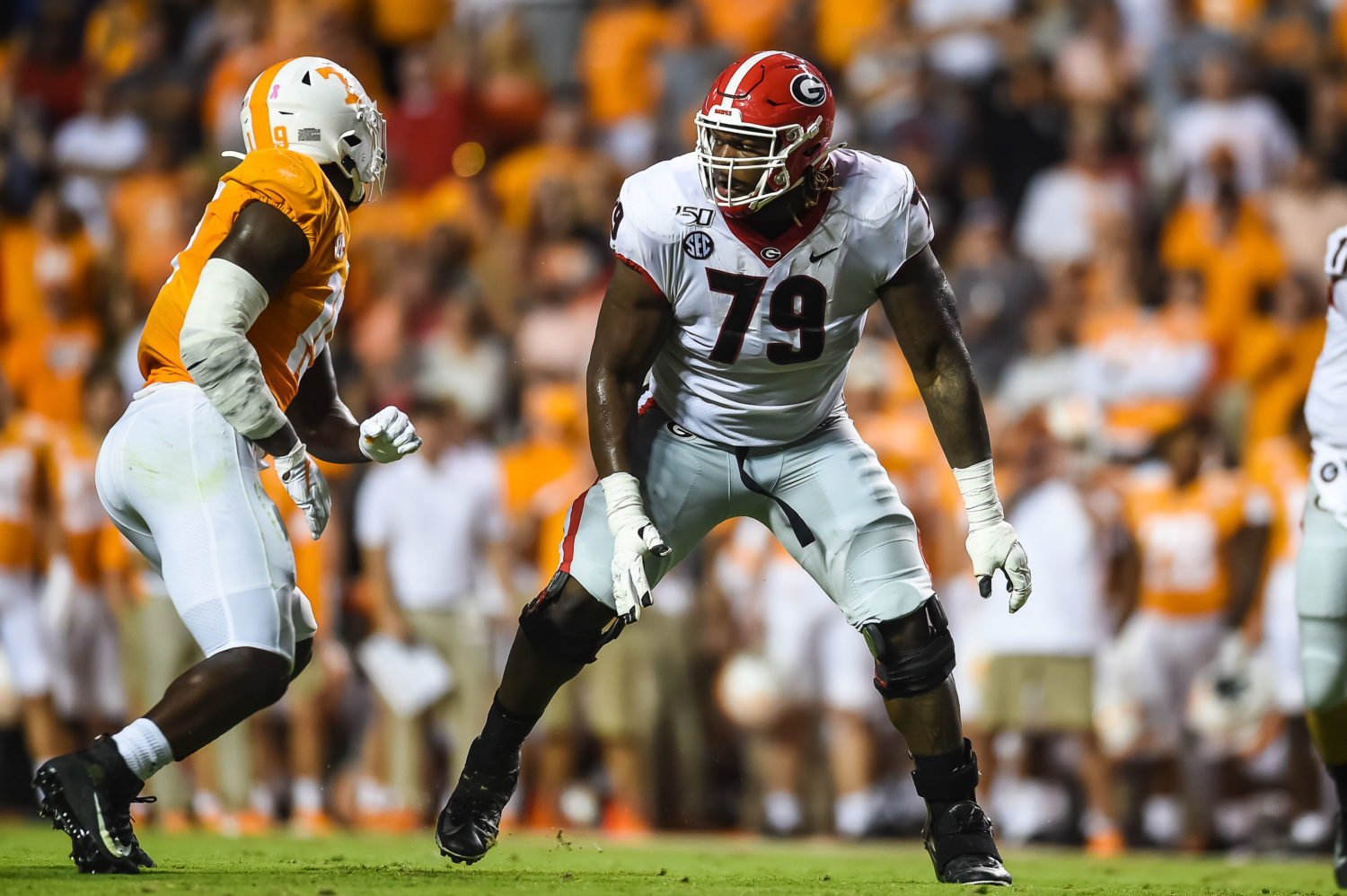 That’s about the best thing that Georgia can hope for at this time. Sure, there’s depth. But can you imagine if we were talking about two or three linemen being out down the stretch? That, in my opinion, would have a drastic impact on how we’d be talking about the Dawgs competing for a national championship.

This group has been really good for most of the year, and even against an A&M defense that isn’t quite as talented up front, it needs to continue to be the backbone of this team. Jake Fromm has been sacked only 6 times all year, and a rushing offense that has been the primary chain-mover relies heavily on that group.

One of the things Georgia wants to see in this game — besides the whole “scoring more points than the other team” thing — is for the offensive line to stay out of the medical tent, which has been an all-too-common occurrence lately.

The A&M defense has been really good the past month

Since the fourth quarter of that Ole Miss game on Oct. 19, the Aggies have been exceptional defensively. Defensive coordinator Mike Elko deserves a lot of credit for that. In the Aggies’ four-game winning streak, they have allowed an average of 16.8 points and 175.5 passing yards on just 43 percent passing. Granted, that came mostly against three true freshmen, dual-threat SEC quarterbacks and UTSA (which actually started former LSU quarterback Lowell Narcisse).

But still. This is the same defense that once upon a time struggled to slow down Ben Hicks and the Chad Morris-led Arkansas offense. So, yeah, improvement. The A&M secondary now ranks No. 27 against the pass, and it’s No. 8 in the country with just 5.78 yards per attempt allowed. Justin Madubuike and Buddy Johnson have been rock solid in the front seven.

Can those guys get Georgia behind the sticks? That’s perhaps the biggest question. We know that Georgia’s offense isn’t build to rely on third-and-long situations. We also know that A&M is No. 13 in FBS in third-down defense.

It feels like if the Aggies are going to pull off the upset, we’ll be talking about a lights-out defensive performance at game’s end.

Does A&M even bother trying to run the ball? I wouldn’t

It seems, um, not smart. The Georgia defense that took 590 minutes of football to allow a rushing touchdown probably isn’t about to have holes galore, especially against an A&M rushing offense that has struggled mightily against quality foes. Isaiah Spiller is averaging just 2.6 yards per carry against top-25 teams this year. 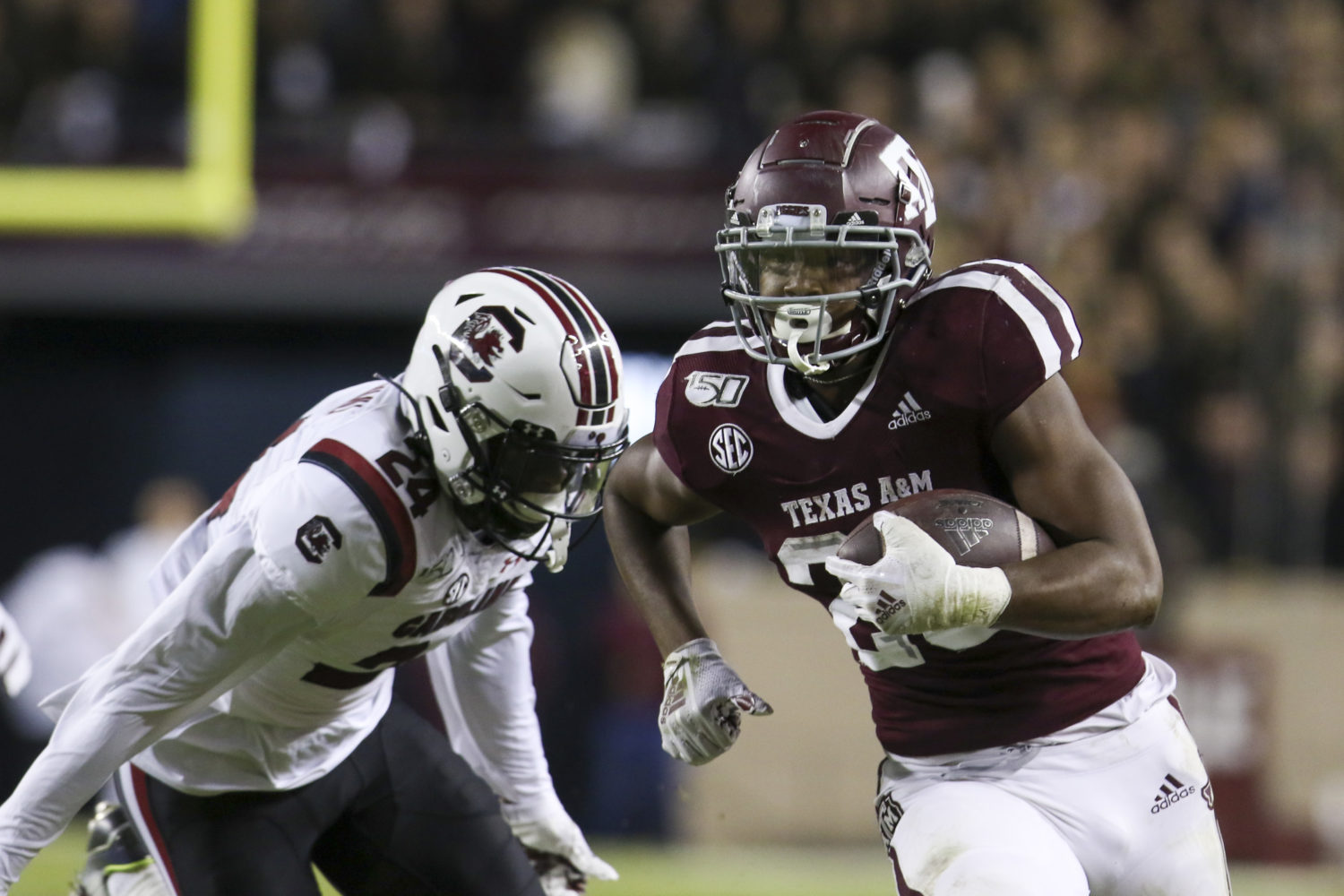 Isaiah Spiller ran wild against South Carolina, but A&M might want to keep him under wraps vs. Georgia. Photo by: John Glaser-USA TODAY Sports

Granted, South Carolina couldn’t slow down the Aggies’ ground attack last weekend. Perhaps some injury issues on the offensive line that hurt the A&M ground game early on are a thing of the past.

Still, even run-heavy Auburn threw the ball 50 times with Bo Nix last week against Georgia. I thought there were a few opportunities for Nix to pick up more yards with his legs than he did. It’ll be interesting to see how much Fisher calls on designed runs with Kellen Mond. That has to be a part of the A&M offense, especially if it’s another brick wall that Spiller and Co. are looking at.

Meanwhile, Mond is the best quarterback the Dawgs have seen in two months. Why not see if he and those skilled receivers can test Georgia in a different way?

The over/under for Gary Danielson’s “Alabama” references is 5.5

Shout-out to my guy Justin Lindsey, who suggested that Danielson’s references to Alabama would be a great over/under for us to discuss on The Saturday Down South Podcast, which you should totally subscribe to if you haven’t already.

It’s an interesting question because Danielson does seem to reference Alabama a bunch, but also because of the aforementioned Saban disciple factor. We’re definitely getting a story or two about being a coordinator for Saban in between Danielson calling out “on balance” lines.

There could also be a reference to Tua Tagovailoa’s injury and the need to keep Fromm healthy in case this one gets ugly. Plus, Danielson will likely bring up how Mond and the A&M offense performed against teams like Clemson and Alabama to try to project how he’ll fare against Georgia.

Whatever the case, let’s just hope we don’t get a repeat of Danielson having 90 seconds of awkwardness like last week:

gary danielson has been trash for a very long time, and this incident really illustrates just how much trash he is. pic.twitter.com/oFU6nr8Rxk

That’s as it relates to the Playoff. It’s simple. Win and get in. Georgia isn’t after style points. It’s just after wins. If that means it has to win a 10-6 ballgame, Smart will take it. It won’t impact Georgia’s Playoff outlook negatively because our expectations for the offense have already been tempered.

Even if this has to be a game in which D’Andre Swift carries the ball 32 times for 105 yards, it’s all about surviving and advancing. At this point, every game is a Playoff game for the Dawgs.

Georgia is sitting there with three wins against current top-25 teams. Saturday is a chance for the Dawgs to pick up their fourth win against a Power 5 team with a winning record. That’s significant for the time being.

I say that because my guess is that Georgia does win ugly in this game. I don’t think the Aggies are the pushovers that they looked like early in the year, and I have questions about how Georgia will sustain drives if receiver Lawrence Cager is as banged up as he was last week.

This has the feel of a 21-10 Georgia win to me. Maybe there’s a defensive touchdown sprinkled in there on a Monty Rice scoop-and-score after a sack of Mond. Perhaps the return game provides some breathing room and sets up a key Georgia touchdown with a short field.

Whatever the case, I can’t picture Georgia marching down the field at will against the Aggies and covering a 2-touchdown spread, even though this game is in Athens. A Georgia offense that has hit 31 points against one Power 5 team all year is going to have to play extremely well to make it a laugher against an improved A&M team.

A win and a Playoff path.