Some good news just dropped for Georgia’s offensive line as Justin Shaffer has announced he will return to Athens for a fifth season.

Shaffer started every game at left guard for Georgia this season. The 2020 season was the first in which Shaffer started for the entire season but he did enter the season with some starting experience as he started both the Tennessee and South Carolina games in 2019 before going down for the season due to injury.

This is just the latest boost to Georgia’s offense looking ahead to the 2021 season as quarterback J.T. Daniels and running back James Cook have both announced they will return to Athens next season.

On the other side of the ball, defensive lineman Jordan Davis and Devonte Wyatt have also announced they will return in 2021.

Here is the statement Shaffer issued on Friday announcing his decision to return: 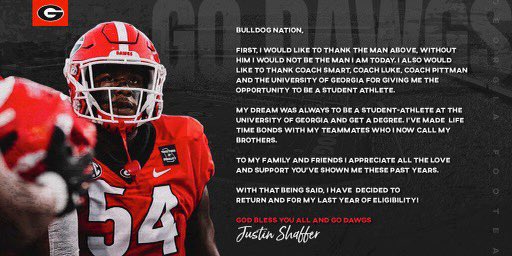