That’s a word that describes Georgia guard Anthony Edwards, not just in terms of his physical attributes, but the way life comes at him.

Just 5 years ago, for instance, his life seemed to be spiraling downward — fast — when he lost his mother and grandmother within 8 short months of one another to cancer.

Then, after becoming the ward of his older brother and sister and moving to a new high school, Holy Spirit Prep in Atlanta, Edwards quickly became one of the top prospects in the country, averaging over 25 points per game as a senior last year and leading his team to the 3A state championship.

Courted by dozens of schools across the country, Anthony signed with the University of Georgia and head coach Tom Crean. Now, just a few short months after moving to Athens, he will likely move on to the NBA.

This season, the 6-5 shooting guard exploded onto the scene with a 37-point performance against Michigan State in the Maui Invitational Tournament in November. He averaged 19.1 points per game, tops among NCAA freshmen and 3rd overall in the SEC.

Accolades seem to gravitate to him. In high school, he was named to the McDonald’s High School All-American team and the USA Today All-USA first team. He was a 5-star recruit, the No. 2-ranked player in his class. Just recently, he was named Southeastern Conference’s Freshman of the Year and Second Team All-SEC as voted on by the conference coaches.

One would think all of the attention would go to this man’s head. Not so.

Forasmuch a competitor as Anthony Edwards is on the court, there is this quiet, unassuming humility to him off the court, says a school official at Holy Spirit Prep. “He is humble to his core, and that’s something that many, many people within our community would often comment about,” the official said. “There’s a fine line between confidence and cockiness and I think people would assume because of his on-court persona that he’s cocky. Really, he’s just very confident.”

While in high school, it wasn’t uncommon for young kids to come up to Anthony and ask for his autograph, and in each instance, he was more than accommodating, the school official says. Willing to take a picture or sign autographs, Anthony never made a person he encountered feel like they weren’t valued or appreciated.

The official recalled several stories of Anthony’s benevolence toward fans and his love for children. In one instance, a young kid sent a handwritten letter to the school, to which Anthony replied and sent back to him. In another, a kid from the grade school below who had been diagnosed with cancer was made the team’s manager for a day, and Anthony insisted he sit beside him on the bench and show him the plays.

“There’s a natural goodness in him which is not normal for a 17-year-old kid,” said the official, who wished to remain anonymous. “As amazing as he is on the court, he’s far more amazing as a person.” 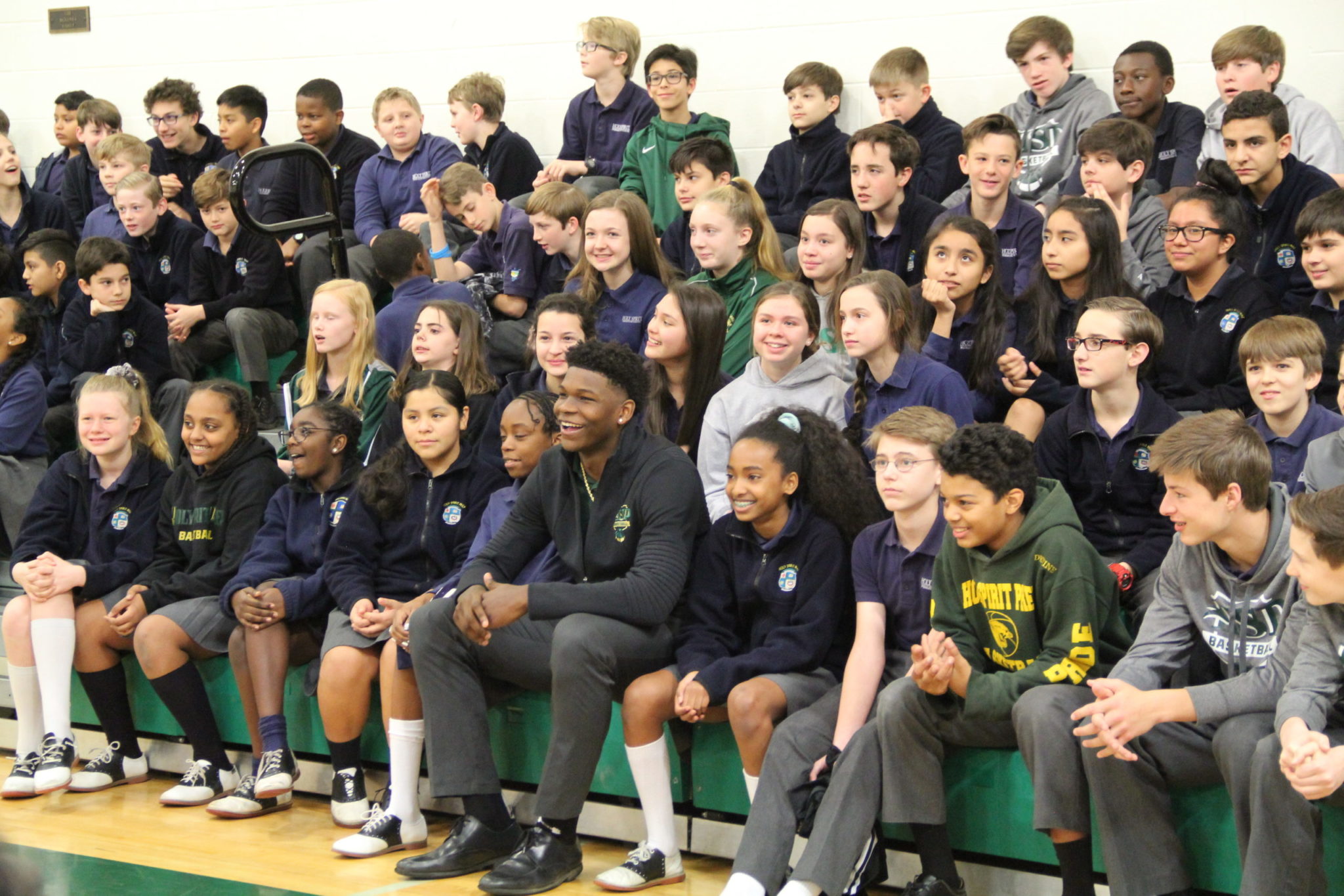 Anthony Edwards was a prep star who blended in as a typical student. Photo courtesy of Holy Spirit Prep.

Forced to rally from the loss of his anchors, his mother and grandmother, Anthony was soon making his own schedule and becoming a man in a kid’s world. He was tasked with balancing the heavy responsibilities of a blue-chip student-athlete: gym in the morning, school all day, team practice, individual workouts, getting home and homework. Then doing it all over again.

He handled these duties well, and he was always armed with a smile.

Basketball wasn’t the only sport in which Anthony excelled. He was a stud on the football field as well. Evan Daniels of 247Sports.com recalled Anthony’s growing up years and his decision to eventually switch from football to basketball. “A young gridiron phenom, Edwards was a standout all over the field — quarterback, running back, wide receiver, cornerback,” Daniels wrote.

But while football was certainly a draw, as Anthony entered high school, he was mesmerized at the attention his older brother, Antony, was receiving on the basketball court. One night he saw his brother catch an alley-oop and thought to himself, “I want to dunk.” Antony developed into a college player, as well, starting at Middle Georgia State. Over time, Anthony would surpass his older brother and become one of the most lauded Georgia high school basketball players in recent memory.

As it turns out, there wasn’t a whole lot of daily hoopla at the school surrounding Anthony’s recruitment process as one might expect. Sure, it was exciting to see Roy Williams in the gym, decked out in his Carolina blue, but for the most part, it wasn’t insanity. Instead, Anthony took the fanfare with ease and an uncanny maturity. Off the court, he even seemed to shun the limelight, preferring to find solace in his own quiet and inconspicuous world. He never asked to be treated differently, nor did he use renown to his advantage.

The school official described him as a pretty normal kid off the court, someone students and teachers knew as “just Anthony.”

This, of course, is a stark contrast from the player who throws down thunderous dunks and rains long jumpers on the fancy courts of America. The player who was so dominant on the summer circuit he reclassified from a 2020 high school graduate to 2019. The player we will soon get to know more fondly when he links up with an NBA team as one of the top 3 picks in the June draft.

Anthony has been described a “resilient,” “humble,” and “authentic.” His college teammates and coaches gush over him, just as those in high school did. Crean told 247 that Edwards likes to see his teammates succeed.

“He’s a very humble guy that doesn’t say too much,” Crump told 247. “He’s laid back. He’s the type of guy that can make your day. If your day is going bad he can put a smile on your face. He cares more about somebody else than he cares about himself.”

Georgia’s season ended after its opening victory in the SEC Tournament. It’s a shame we hardly knew him as a college basketball player. We’ve gotten him in fragments and short frames, and now, he’s likely gone.

Such is the fast-moving life of the greatest of us.

“I’ve said from the beginning,” the official said, “when the world starts to know who he is and sees who he is, not only for basketball, but actually who he is, the world is going to love him.”

TRENDING
58,148 READS
Deion Sanders reportedly deciding between 3 FBS head coaching jobs; decision could come by Sunday
51,772 READS
Lane Kiffin welcomes Hugh Freeze to the SEC in a way only the Ole Miss coach can
23,016 READS
Why we won't remember any 2022 team as historically elite (even Georgia)