The Kentucky Wildcats may have enjoyed the Thanksgiving holiday and emerged refreshed and with a new sense of gratitude and brotherhood, but those feelings apparently didn’t extend to their in-state rival, the Louisville Cardinals. Kentucky’s 45-13 win was a second consecutive blowout over the Cardinals, and the Wildcats set or approached several school records. So here are the (numerous) highs and (relatively few) lows of the blowout victory.

Lynn Bowden tied the school record for rushing touchdowns (4), amassed the third-most rushing yards ever for a UK played (284) and certainly earned the Howard Schnellenberger Award as the Most Valuable Player of the game. Bowden was 1-for-2 passing for 4 yards. But, frankly, so what? He surpassed 1,200 rushing yards for the season and moved Kentucky to 5-2 since he took over as the starting quarterback.

It was Senior Day for Logan Stenberg and Mason Wolfe, but they were only two of several contributing big men who paved the way for a historic ground game. For the second week in a row, the Wildcats set a single-game rushing record, this time with 517 yards. It’s a testimony to the play up front that Kentucky pulled off this feat with an offense that passed for fewer than 25 total yards over the two weeks in question.

Rodriguez has spent much of the season as Kentucky’s third-string running back, but with 125 yards on just 9 carries, Rodriguez eclipsed 500 yards for the season on 65 carries. His grinding running style makes him the heir apparent to Benny Snell as UK’s bruising power rusher. 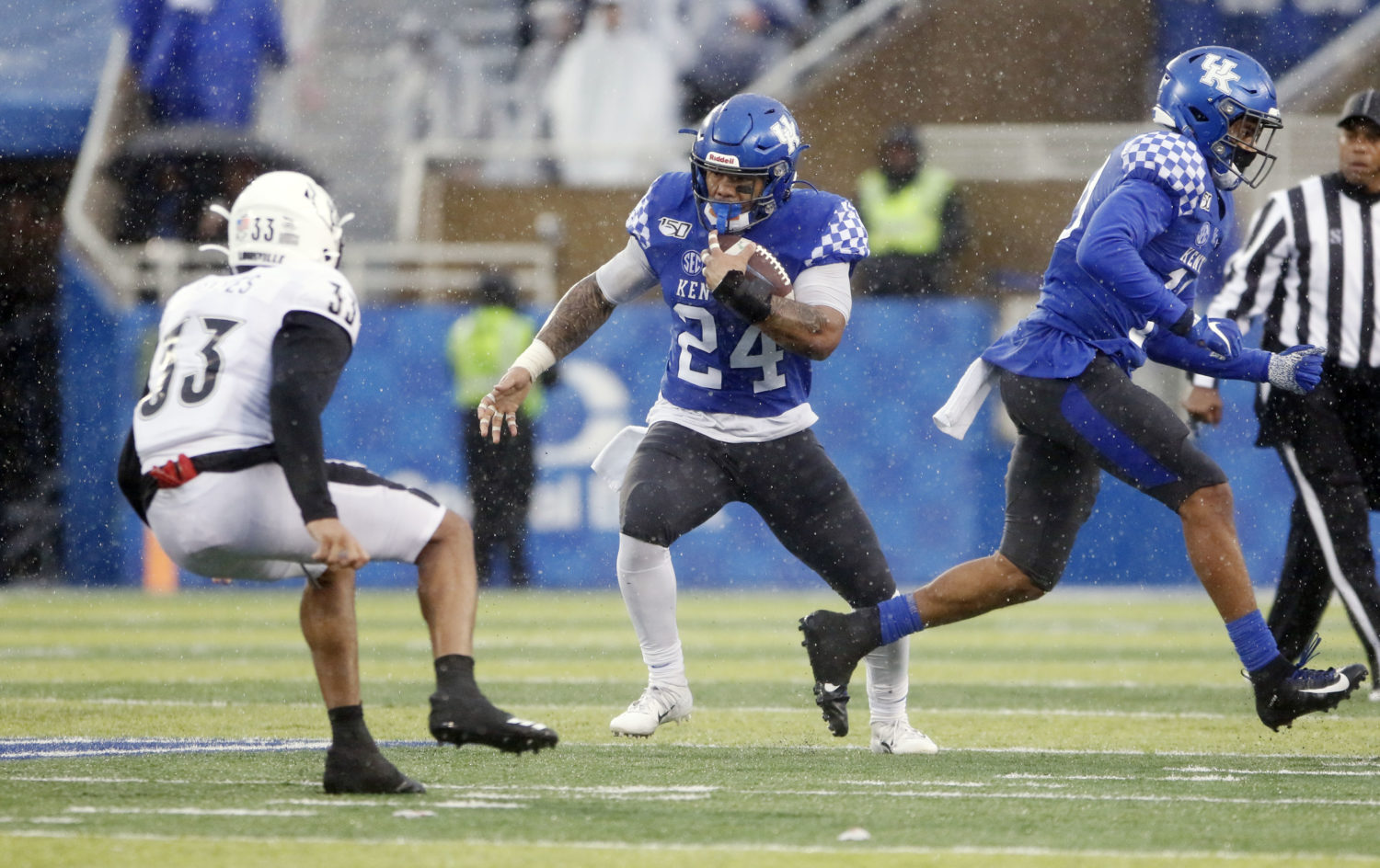 Chris Rodriguez had 125 yards on 9 carries to top 500 yards for the season. Photo by: Mark Zerof-USA TODAY Sports

Kentucky sacked Louisville’s quarterbacks 6 times and racked up 13 tackles for loss. Louisville scored on two big plays, but otherwise the Cardinals struggled to sustain drives, punting 6 times. UK’s defensive front kept Macale Cunningham from ever getting comfortable, and that was key to the victory.

The Kentucky-Louisville rivalry has featured alternating runs from both teams, but with three victories in the past four years and two consecutive maulings, Kentucky has officially flipped the script to owning the latest era of the battle for the Governor’s Cup.

About the only thing that didn’t work for UK was a horrid late first-half play call to go for a fourth and 1 inside the UL 45-yard line. After Kentucky didn’t convert, Louisville scored a touchdown on the next play to draw within 17-13 at halftime. Mark Stoops’ choice to attempt a fourth-and-short field goal from 45 yards out was also questionable, but walk-on Matt Ruffolo converted the kick, so the results were sound, even if the decision felt odd.

This was a very sparsely attended game because with a game-time temperature of about 40 degrees, swirling winds and consistent rain, it was horrible weather for fans. On the other hand, this might be another thing to like. Since the injuries that forced Bowden to quarterback, Kentucky has played in a collection of rainy, muddy games that have done nothing to hurt the team’s identity as a run-first, run-second, run-third power football team. Maybe fan comfort is the tradeoff for a comfortable win.

Louisville did gash Kentucky a couple of times in the run game, as Kentucky frequently took poor angles and gave up big gains to Cardinals back Javian Hawkins. Hawkins finished with 142 rushing yards on 22 carries, and whoever Kentucky plays in its bowl game will doubtlessly be reviewing the handful of big plays when Kentucky lost containment on Hawkins.