Add another one to the list: Kentucky senior defensive back Quandre Mosely announces he will return next season

The wave of momentum in Lexington isn’t slowing down as Kentucky just got more good news.

If you missed it, five Wildcat seniors have already announced they plan to return to the team next season.

Receiver Josh Ali, tight end Justin Rigg, defensive backs Zach Johnson and Davonte Robinson and defensive lineman Josh Paschal have all announced their decisions to return and now another defensive back plans to return for the Wildcats as senior Quandre Mosely has announced his decision on Sunday.

“I chose to come back because I believe I am a part of something great here. Although this season didn’t go the way we planned, I believe it’s all working out for the best. I have made great friends and relationships, and the UK football team has become family to me,” Mosely shared in his return announcement.

Mosely has played two seasons in Lexington after transferring in from Eastern Arizona Community College. During his two seasons with the Wildcats, Mosely has mad 43 tackles, one interception and defended five passes.

In case you are unaware, the NCAA has given all players a free season of eligibility in 2020. This is how these Kentucky seniors are permitted to return for another season.

Additionally, all seniors that decide to return for another season will not count against their program’s 85-man scholarship limit.

Here is the graphic he shared to announce his decision. 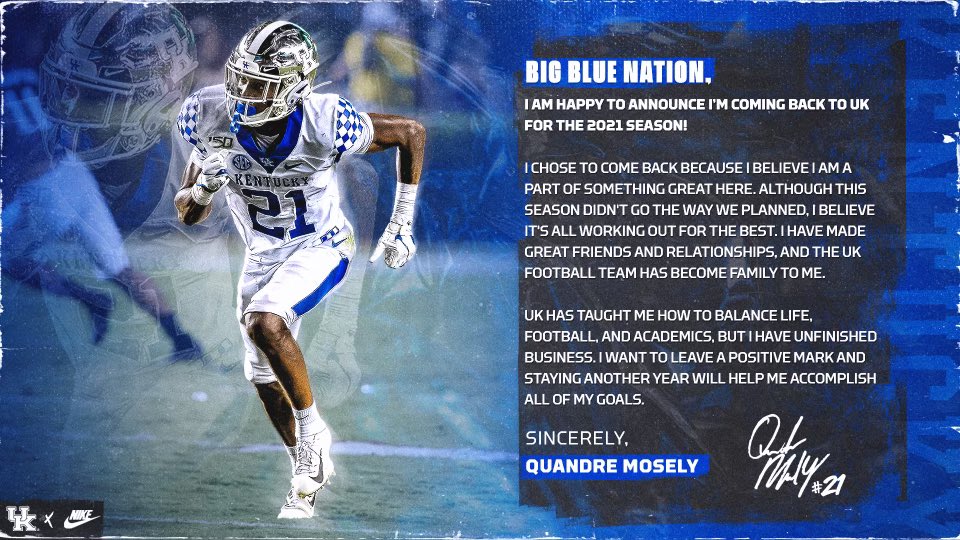