Jimbo Fisher repeats himself: LSU not a better job than Florida State

LSU fans had a lot to be thankful for on Thanksgiving, but the way the Tigers have gone about replacing Les Miles isn’t one of them.

Those are four of LSU’s premier players, by the way, including probably the No. 1 running back in the history of the school in Fournette. His backup, Derrius Guice, set a Tigers single-game record with 285 yards rushing — one more than the 284 that Fournette had earlier this year — and scored 4 touchdowns to silence the 12th Man.

However, Orgeron’s spirited coaching effort was cast aside amid the rumors circling during the ESPN broadcast that LSU was about to hire Tom Herman.

The soon-to-be ex-Houston coach is the hottest commodity on the annual coaching carousel. If the Bayou Bengals want to hire him, more than likely they’ll have to beat mighty Texas to the punch. We’ll know more in the next day or two.

The Longhorns are busy butchering their own coaching search — poor Charlie Strong — and making LSU look competent in the process. That’s not easy to do these days. Apparently, reporters were banging on the door of athletic director Joe Alleva’s suite at Kyle Field. He shooed them away before issuing a lame statement.

Among the fallout was the fact that Florida State coach Jimbo Fisher reportedly turned the Tigers down, which ramped up their pursuit of Herman.

This is the second season in a row that LSU has tried to lure Fisher away from the Seminoles. With Miles all but fired a year ago, the brain trust in Baton Rouge was forced to keep him when their courtship of Fisher came up empty. 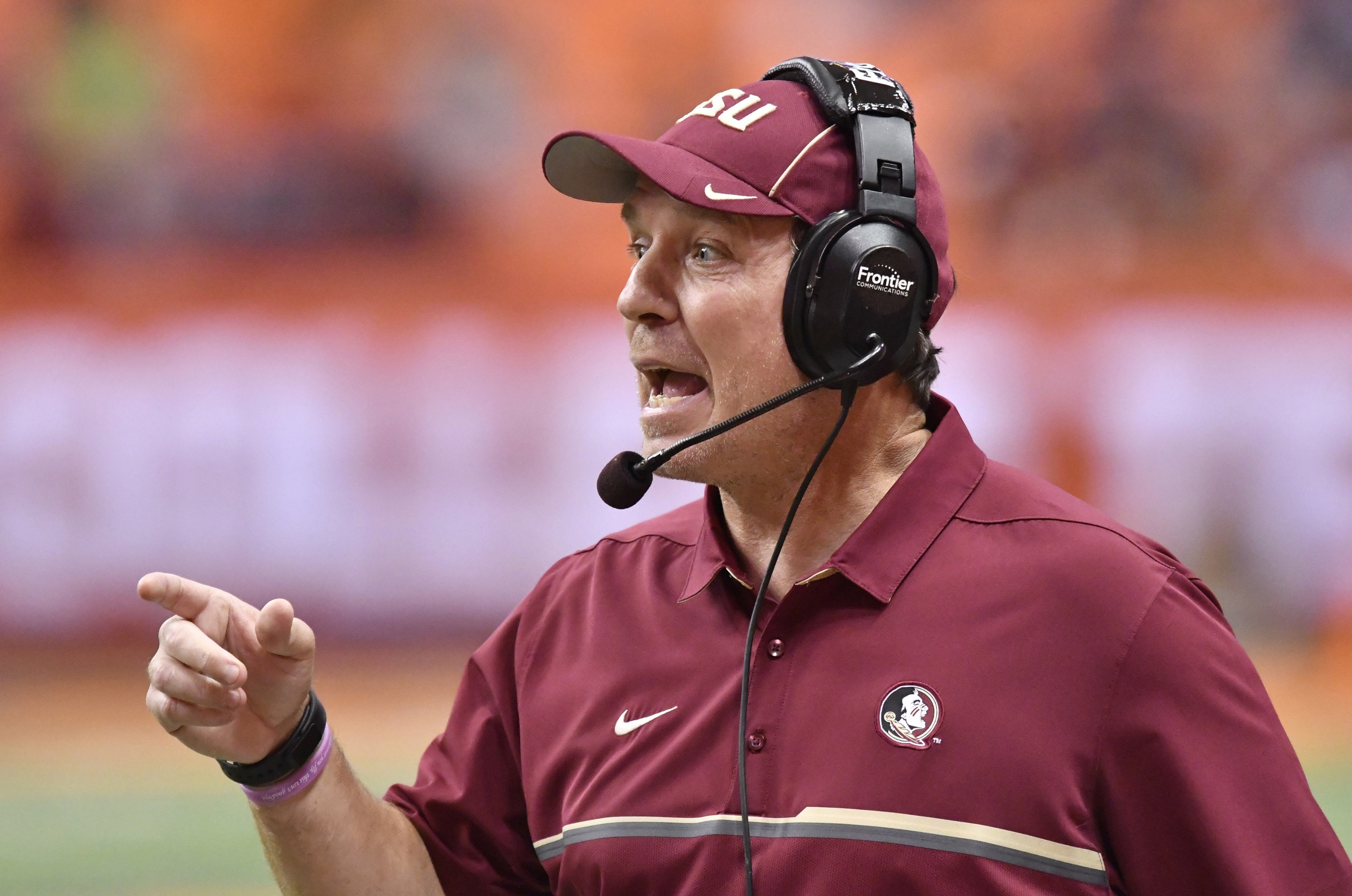 People in Tallahassee have experienced a case of déjà vu in 2016, as Fisher has again been linked to a possible job opening — a decision on Orgeron’s future is yet to be made, at least publicly — with the Bayou Bengals. Because he was their offensive coordinator from 2000-06, everyone just assumes that he’s dying to go back.

Fans of the Tigers need to understand this once and for all: Fisher clearly isn’t dying to go back. He’s now said no to them twice.

If LSU does manage to steal Herman out from under Texas, then everyone in the Pelican State will be happy. He’s one of the bright young minds in America, cut his teeth under Urban Meyer and, most important, knows how to throw the ball.

However, if it doesn’t happen, then the Bayou Bengals will have egg on their faces for the second consecutive fall. Reading between the lines, it’s not hard to figure out that the higher-ups don’t want to settle for Orgeron — great short-term solution, poor long-term fix. Ignore the pleas from players on social media begging to keep him.

Perhaps this job isn’t as attractive as they think. Coaches notice when administrators (i.e., their potential bosses) muck it up so royally.

Getting back to Fisher, the uninformed just assume that LSU is a better job than FSU. The SEC is the best conference in America. Louisiana’s recruiting footprint is fabulous. No in-state competition. The gumbo is delicious, too.

Nevertheless, Fisher would be foolish to leave the ‘Noles now. One of the true quarterback gurus in the game, he’s seen Deondre Francois complete 60.8 percent of his passes — showing rare toughness under duress — and assemble a touchdown-to-interception ratio of 17-to-5 as a redshirt freshman. He has three years of eligibility left.

The Tigers, on the other hand, are probably looking at another season of Danny Etling, who once upon a time got benched at lowly Purdue.

But aside from the depth chart at the game’s most important position, matter-of-factly speaking, LSU simply isn’t a better job than FSU. At best, it would be a lateral move for Fisher. It might even be a step down. 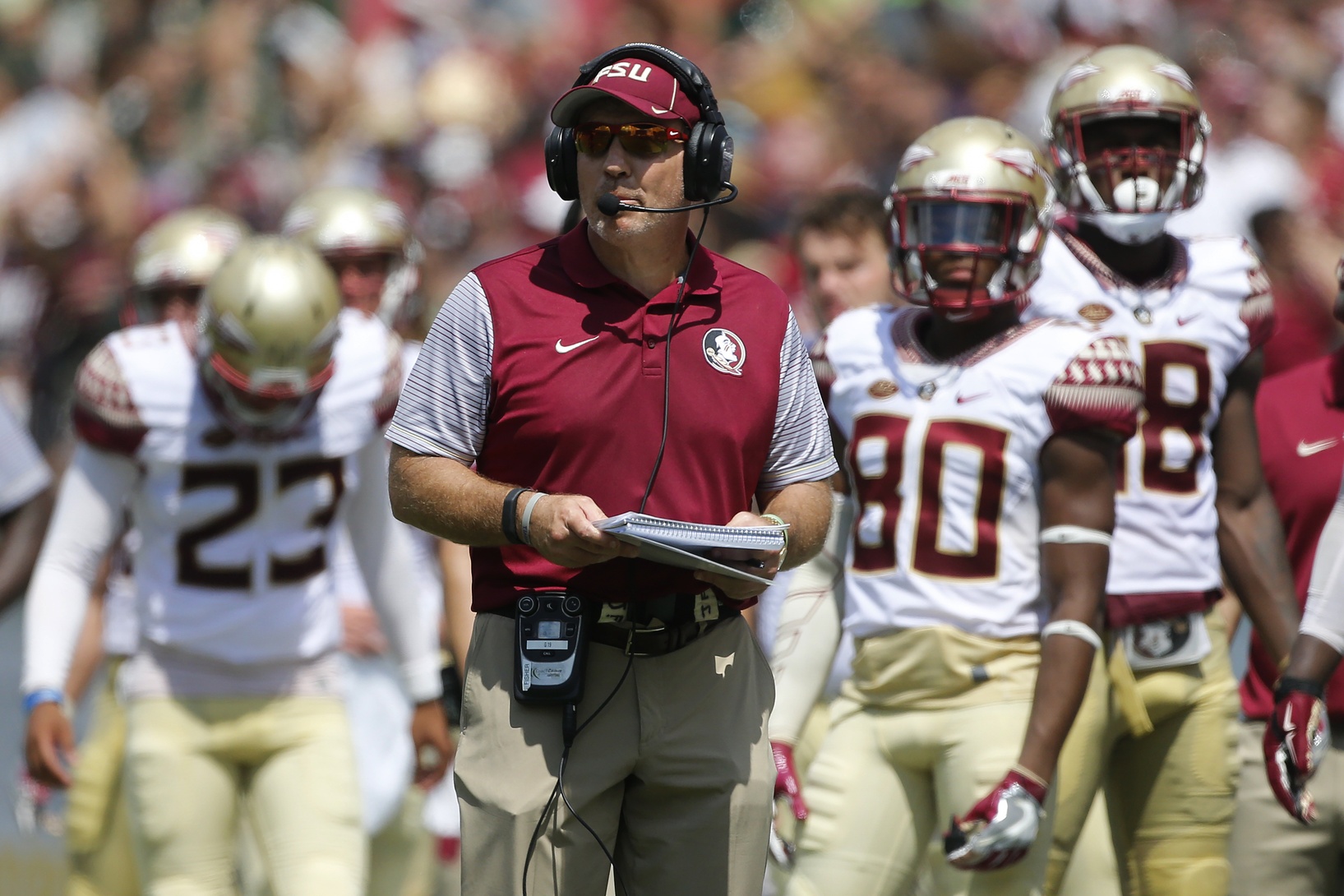 While the ACC obviously isn’t the SEC in terms of prestige on the gridiron, it’s a better league than most folks care to admit. The Big 12 and Pac-12 are having trouble getting their teams into the College Football Playoff — both have already been left out once already. That’s not the case for the ACC.

Fisher took Florida State to the first iteration of the Final Four in 2014. Clemson went last year and will likely make it this season, too.

From a recruiting perspective, yes, Louisiana is rich with four- and five-star talent. But you know what’s richer? Florida, where Fisher currently resides. That’s partially why he’s arguably the best recruiter in the nation this side of Nick Saban.

After taking over for the legendary Bobby Bowden, Fisher let the decision makers in the Capital City know that the program needed to be modernized badly. Money, of course, was required every step of the way. Time and again, they’ve come through. He makes $5.25 million annually — already more than what Miles commanded.

There’s nothing the Tigers can offer him that the Seminoles don’t already provide, except the privilege of finishing behind Saban every year in the West. I’m sure Fisher would rather take his chances with Dabo Swinney, thank you very much.

More money? FSU can match any dollar figure. More tradition? Since 1976, Bowden’s first season, no team nationally has won more games than the Seminoles. They even have their own reality show. Also, the state of Louisiana isn’t “home” — Fisher’s from West Virginia. His roots run longer and deeper in Tallahassee than they ever did in Baton Rouge.

LSU is one of the top jobs in the land, but it’s not better than Florida State. There isn’t enough gumbo on the bayou to convince Fisher otherwise.