ALBANY, Ohio — Eric Lucas laid awake at 3 in the morning, trying to concoct an outfit.

The restlessness was a product of wanting to pay proper tribute to LSU quarterback Joe Burrow at a watch party for the CFP semifinal, held at Burrow’s home church, Christ Community Wesleyan in Albany, Ohio, on Saturday.

For Lucas, it was go hard or go home, and rest assured, the spiky purple wig, the bedazzled loafers, and the “custom” sunglasses that would make Randy “Macho Man” Savage envious weren’t items he discovered while rummaging through his closet. This outfit took time and aforethought.

“The shoes I found online and I bedazzled them myself,” Lucas said, speaking of the glued sequins fashioned into neat rows. “I thought these were Armani’s and I found out they were some knock-off.” 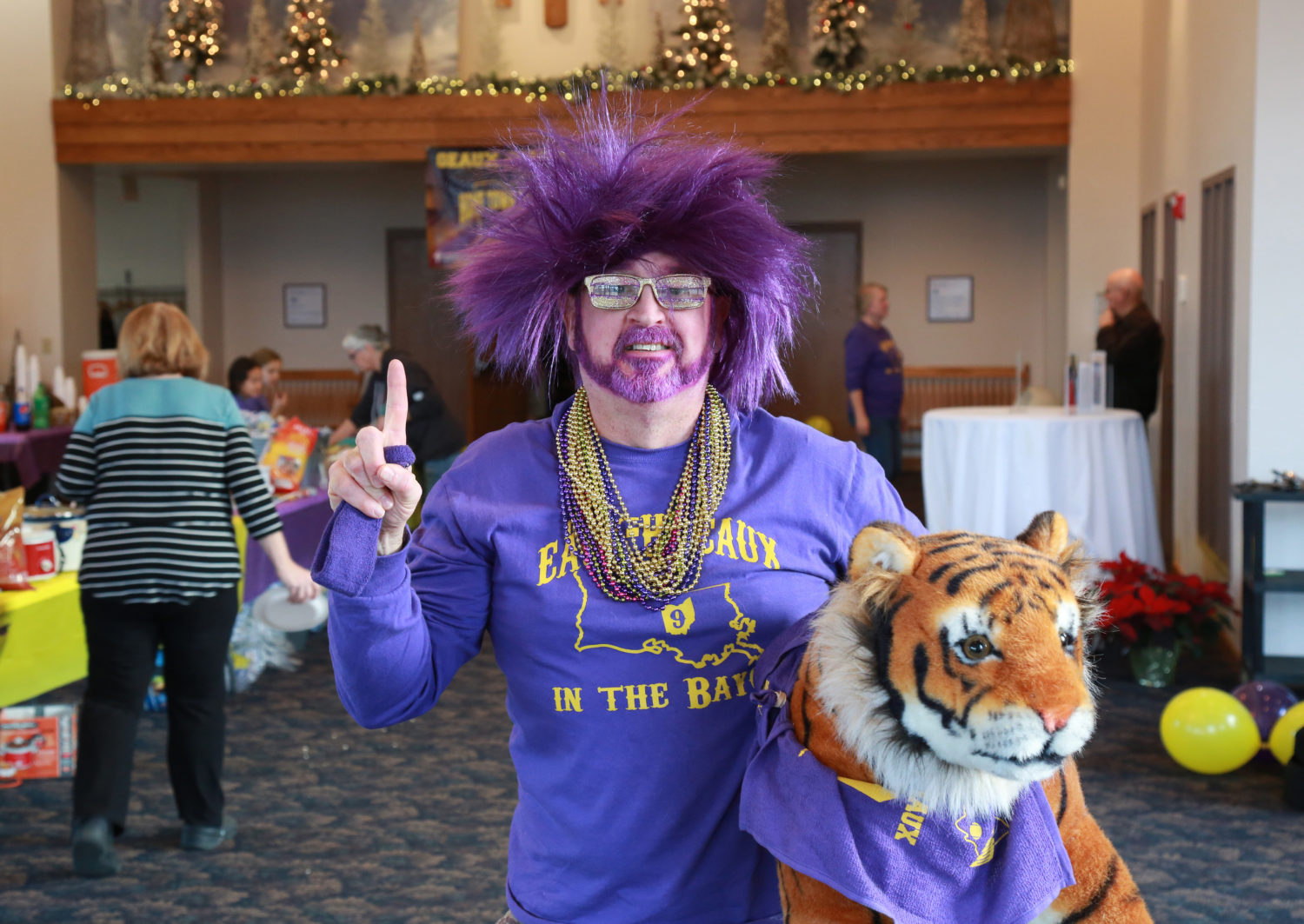 Underneath a purple T-shirt reading “Eaux-Hi-Eaux in the Bayou, “Lucas wears camouflage pants, making the viewer of said apparel wonder if this quite possibly is a nod to Louisiana’s favorite sons, the men of Duck Dynasty. But…“These are my church pants,” Lucas jokes. “My wife wouldn’t let me wear the gold leotards I wanted to wear.”

With a huge stuffed animal tiger in tow, Lucas arrived at the event early and claimed his area by fastening two large LSU flags to the backs of sanctuary chairs. But the most glaring evidence of his dedicated homage was his beard, dyed purple (yes, this may be southeast Ohio, but without question this vibe would be befitting for Bourbon Street).

Lucas is just one of the many congregants decked out in LSU colors Saturday at Christ Community Wesleyan. And while liturgically the color purple represents the season of advent, in this case it epitomizes a congregation’s (a region’s) fanaticism with its hometown hero, Burrow, who grew up just a few miles down the road in a tiny hamlet called The Plains, Ohio.

Though most folks don’t go as all-out as Lucas, T-shirts are the popular choice tonight at the watch party. Designs run the gamut, from the most basic “LSU” to one that reads “Bulldog in the Bayou” (referencing the mascot of Burrow’s high school team).

Most of the LSU paraphernalia here was ordered online, since local stores carry mostly Ohio State or Ohio University gear. But some designs, including the black “Heisman” shirt worn by many, were produced locally at a store called Zonez. “I ordered (the shirt) within 15 minutes after he was awarded the Heisman,” says Diana West, who happily admits this purchase was her third of a Joe Burrow design.

The watch party/tailgate began at 3 p.m. before the LSU-Oklahoma game, the first of the two CFP semifinals of the evening. This was the second such event held at Christ Community, the first of which was a larger soiree held out in the church parking lot the night of the SEC Championship when LSU whipped Georgia. Senior pastor Steven Warner, who arrived at the church this past July, seems to be taking the Burrow fanaticism all in stride. “I saw the excitement and thought it was a great opportunity to get together and celebrate the local kid,” said Warner, who, having grown up in Ohio, is no stranger to big-time football.

Driving up to the church parking lot, the first vestige of a tailgating atmosphere was a blowup LSU helmet, given as a gift to one of the church members. Inside, a variety of fare — chili, barbeque, hot dogs, weenies and chips — was stretched out across four tables, topped with purple and yellow tablecloths. A raffle was held for a Tiger-printed throw, and a local TV station arrived to interview several of the church members. Moving even further into the LSU-festooned sanctum, the dimmed lights and stretched screen of the sanctuary provided a theatrical experience perfect for game day. 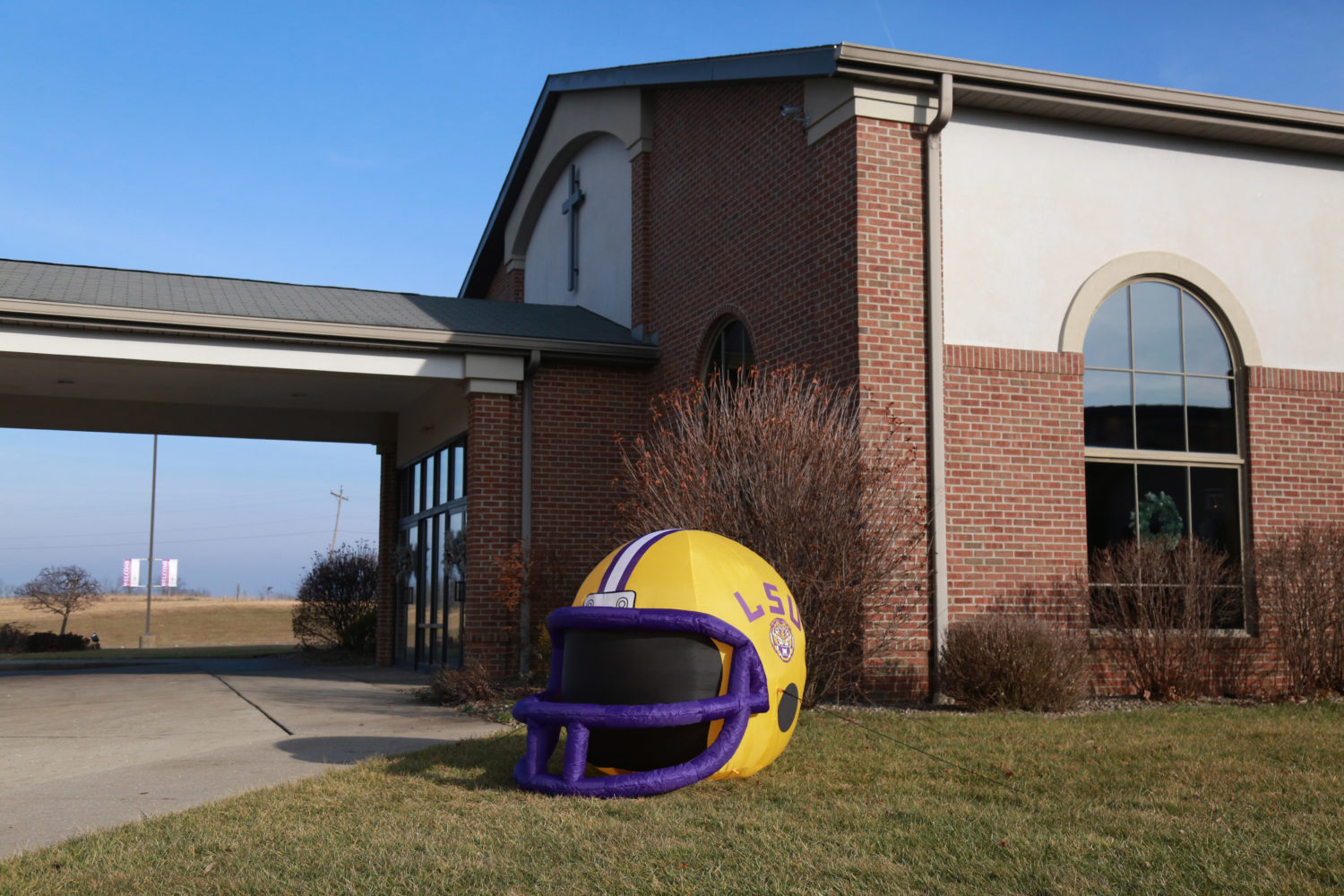 Throughout the record-setting evening, fans rallied behind the hometown boy wearing No. 9 who began his college career in Columbus with a question mark and is ending it in Baton Rouge with an exclamation point. Adults played intermittent games of catch in the back of the sanctuary, while children chased each other throughout the church.

Perhaps at some point, everyone imagined they were Joe Burrow.

For every positive play made by LSU, cheers would ring throughout the small sanctuary. For every one made by Burrow, there was a small eruption.

After Burrow’s 4th touchdown pass put LSU ahead 28-7, a lady wearing a shirt that says “We are Eaux-Hi-Eaux for Jeaux” jokes, “If he keeps playing like this, he might win the Heisman!”

Then, after a 39-yard pass from Burrow to Justin Jefferson near the end of the first half, the crowd breaks into a chant: L-S-U! L-S-U!

In the second quarter, Burrow’s team is up 42-14 when Larry Lambert says, “Alright, let’s get another one right here!” as LSU takes the ball. When someone suggests he’s getting a little greedy, Larry laughs and says, “I want Joe to rest a little bit.”

It was a historic night in which records fell and Burrow continued to do what he’s been doing since he was a wunderkind at Athens High School, where he won Mr. Football in Ohio. It’s something folks in this area have come to expect, and something that brings a tremendous amount of pride to the hard life in these foothills.

By halftime, the game was already over and Lucas had taken off that stuffy wig. If you hadn’t noticed it before, Lucas made sure his eyebrows — flashing bright as bike decals — weren’t overlooked by the purple dye.

“How hard is that to remove?” I ask, imagining a painstaking process.