Pro Day at LSU confirms that Tigers have underachieved, been outcoached

If you didn’t know any better, you might have thought that LSU was the defending national champion with the talent on display Wednesday at Pro Day.

Running back Leonard Fournette was built like a Greek god at a lean-and-mean 228 pounds. Safety Jamal Adams burned up the 40-yard dash with a time of 4.33 seconds. Linemen on both sides of the ball went through drills like skill-position players.

Nevertheless, the Tigers haven’t so much as won double-digit games the last three years, let alone been in the hunt for a national title. Somehow, this team was blanked by Arkansas in 2014, pasted by those same Razorbacks in 2015 — the Hogs were unranked each time — and scored a grand total of 37 points in four losses this past season.

The man who assembled all these freaks, Les Miles, remains unemployed. His successor, Ed Orgeron, inherited an embarrassment of riches.

“Today was a tremendous day for LSU football and the LSU brand,” Orgeron said, according to NOLA.com. “We are proud of the 18 young men that worked out. All of them did a tremendous job. Austin Thomas, our general manager, did a tremendous job of organizing the whole day. Talking to a lot of the NFL guys, this has been the best Pro Day of the whole season, so we’re happy about that.”

There were 125 NFL personnel on hand for the proceedings at the indoor practice facility, including five head coaches. Baylor has been a powerhouse recently and also held Pro Day on Wednesday, yet no head coaches were in attendance.

While he didn’t do any of the running or lifting, choosing instead to stick with positional work, Fournette (below) was one of the winners simply by stepping on the scale. An unexpectedly heavy 240 just a month ago at the Scouting Combine — he still ran 4.51, though — he was 12 pounds lighter and looked like an extra in a “300” reboot. 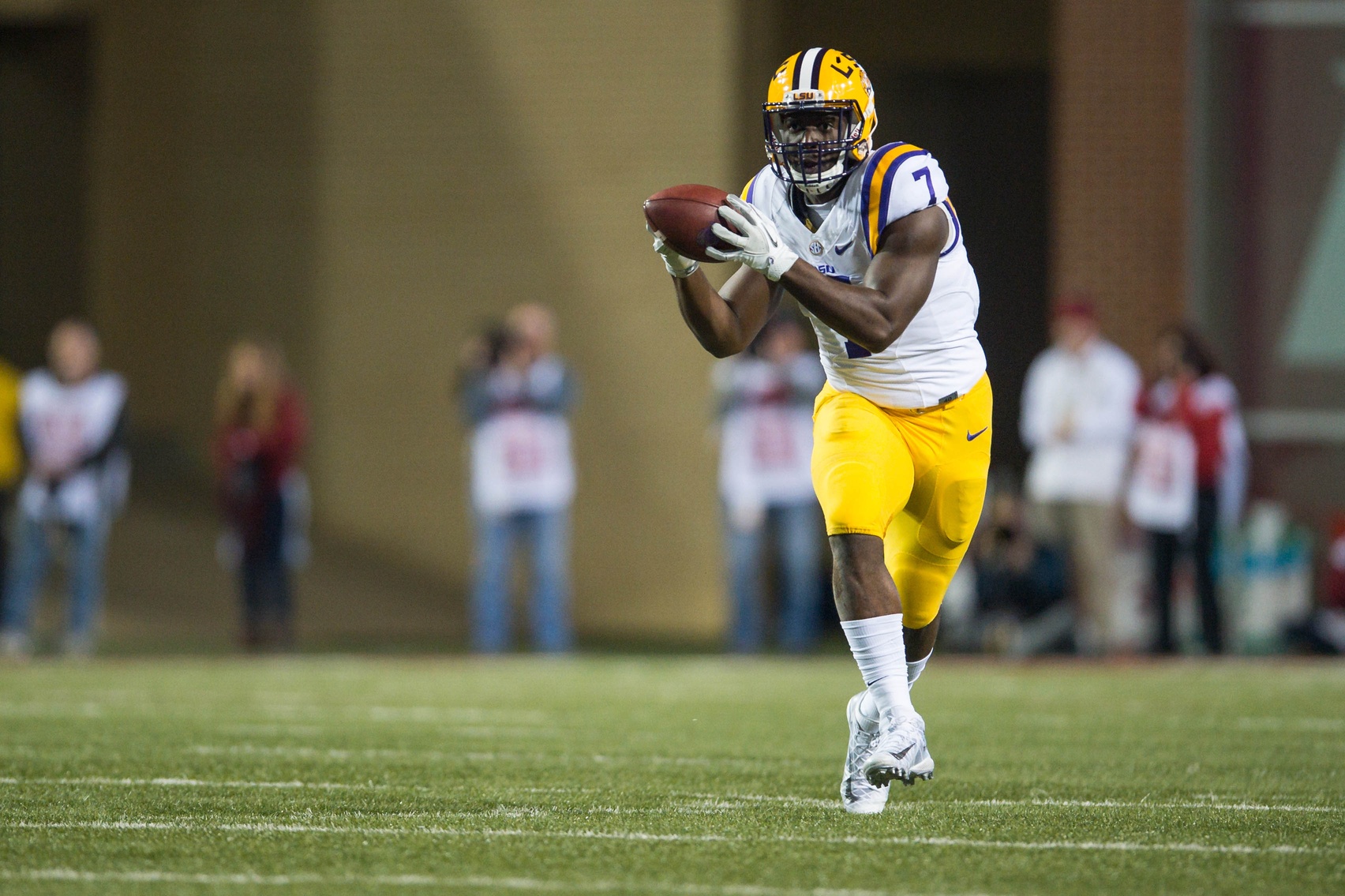 Attributing his previous measurables to nothing more than drinking lots of water, he seems to have changed his diet, too.

“My mom has been on me about what I’ve been eating,” Fournette said. “Basically, I just wanted to show everyone that I could lose the weight. It really doesn’t matter. I’m going to play good at whatever weight I want to. Some people had concerns about me at 240 pounds. Playing at the next level is different. I might be playing at 250, but I just wanted to show them I could stay on course, be disciplined and do what I have to do to get my business in order.”

Any possibility of Fournette slipping in the NFL Draft due to concerns over his playing weight has been completely eradicated. The No. 1 prospect available at his position, he appears to be destined for the Top 10.

Adams is likely to come off the board even earlier than Fournette. The premier safety in the draft, he improved his 40 by .23 seconds — the 4.56 he ran in Indianapolis wasn’t exactly slow, either — and could break into the Top 5. No safety has ever been chosen earlier than fifth. Sean Taylor and Eric Berry both went fourth overall.

Having covered the Chicago Bears earlier in my career, I know for a fact they’re examining him closely with the No. 3 pick.

“The game is changing to where tight ends are much more like receivers,” Adams said. “They’re coming out in different personnel to get the safety to come down and cover. I feel like I’m versatile and can play anything. I can blitz, cover in the slot, I can run sideline to sideline, and that’s what I feel separates me from the other defensive backs in the draft. There’s lots of talent in the draft, but hopefully I make history and go top four.”

The Bayou Bengals have put enough cornerbacks and safeties into the pros the last few years to be in the conversation for “DBU.” But even Patrick Peterson, a six-time Pro Bowl corner, lasted until No. 5.

Not only has LSU filled Sunday secondaries with cover men, but two of the most productive receivers in today’s game — Odell Beckham Jr. and Jarvis Landry — played collegiately in Baton Rouge. Both a part of the 2014 draft, they’ve made five Pro Bowls between them in only three years and done so in spectacular fashion.

Like Beckham and Landry, wideout Malachi Dupre (above) may not have a chance to show what he can really do until he starts getting paid.

“I would say we had a lot of great players on a great team,” Dupre said. “We had a great backfield with Leonard and Derrius (Guice). We had great receivers. We ran the ball more than we passed it, and the coaches felt that it was the best thing for us to win football games, so you cannot question that. I enjoyed my time here.”

Even with a ring on his finger, Miles was pink-slipped due to his inability to evolve offensively and develop a legit passing game. Dupre, a 5-star signee out of high school just like Fournette and Adams, disappointed as a result.

The Tigers will have multiple first-rounders and 10 or so kids selected total. Pro Day proved once and for all that Miles underachieved with the roster he had at his disposal — he also got outcoached too often. We know Orgeron can command a living room like Miles. But what we don’t yet know is if he can truly command a sideline.

Losing Fournette, Adams and Dupre to the draft a year early is a blow, but there’s never a shortage of blue-chippers on the bayou.

“It was just a tremendous day for LSU football,” Orgeron said.

Indeed, it was another “tremendous day” for the Bayou Bengals. Unfortunately, too many of them happen during the offseason.