Missouri RB tweets that offensive coordinator should be left at Arkansas

Many people have shown their frustration with Missouri’s offense, and that’s to be expected this season. However, it’s certainly a surprise when a member of the team doesn’t hide it.

Missouri redshirt senior RB Trevon Walters responded to a tweet in regards to offensive coordinator Josh Henson after the team’s 28-3 loss to Arkansas. 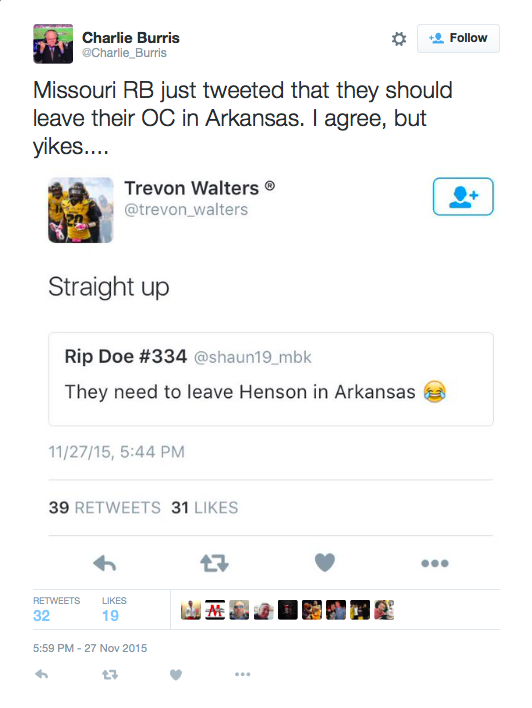 The Tigers only managed 171 yards, the team’s second-lowest output of the season behind the 164 yards it recorded against Georgia on Oct. 17. Entering this week, Missouri averaged just 290.9 total yards per game, second-worst among Power 5 teams. Only Boston College’s 278.9 ranks lower.

Walters later revealed his frustration with the loss in general, and how coach Gary Pinkel was sent out on a sour note.

Man I came here to play football for coach Pinkel and get an education but the way we let him go out is an embarrassment.

Talal Elmasry
Born and raised in Gainesville, Talal joined SDS in 2015 after spending 2 years in Bristol as an ESPN researcher. Previously, Talal worked at The Gainesville Sun.
RECENT ARTICLES
MIZZOU
Missouri football: What we learned about the Tigers from their loss to Boston College
MIZZOU
Eli Drinkwitz describes what Mizzou run defense must do after loss at Boston College
MIZZOU
Boston College trolls Mizzou, Eli Drinkwitz on Twitter following win over Tigers
MIZZOU
Rapid Reaction: Mizzou defense can't stop the run in brutal road loss at Boston College
PRESENTED BY