NBA Finals Game 2: How often does the away team win game 2?

Game 1 of the NBA Finals between the Milwaukee Bucks and the Phoenix Suns is over, and the Suns have a 1-0 lead on the Bucks. Led by Chris Paul’s 32 points, the Suns won the game by a score of 118-105. Giannis Antentokounmpo returned from injury to deliver a 20 point, 17 rebounds performance, but unfortunately, the Bucks likely need more from their star. After missing two games with a knee injury, Giannis looked “mostly” back and helped keep his team in it. Free throws continue to plague Giannis and the Bucks who shot 9/16 (56.3%) from the line compared to the Suns’ red hot 25/26 (96.2%). Can Giannis and the Bucks rebound and steal game 2 on the Suns’ home court? Let’s discuss what NBA Finals history has to say about this. 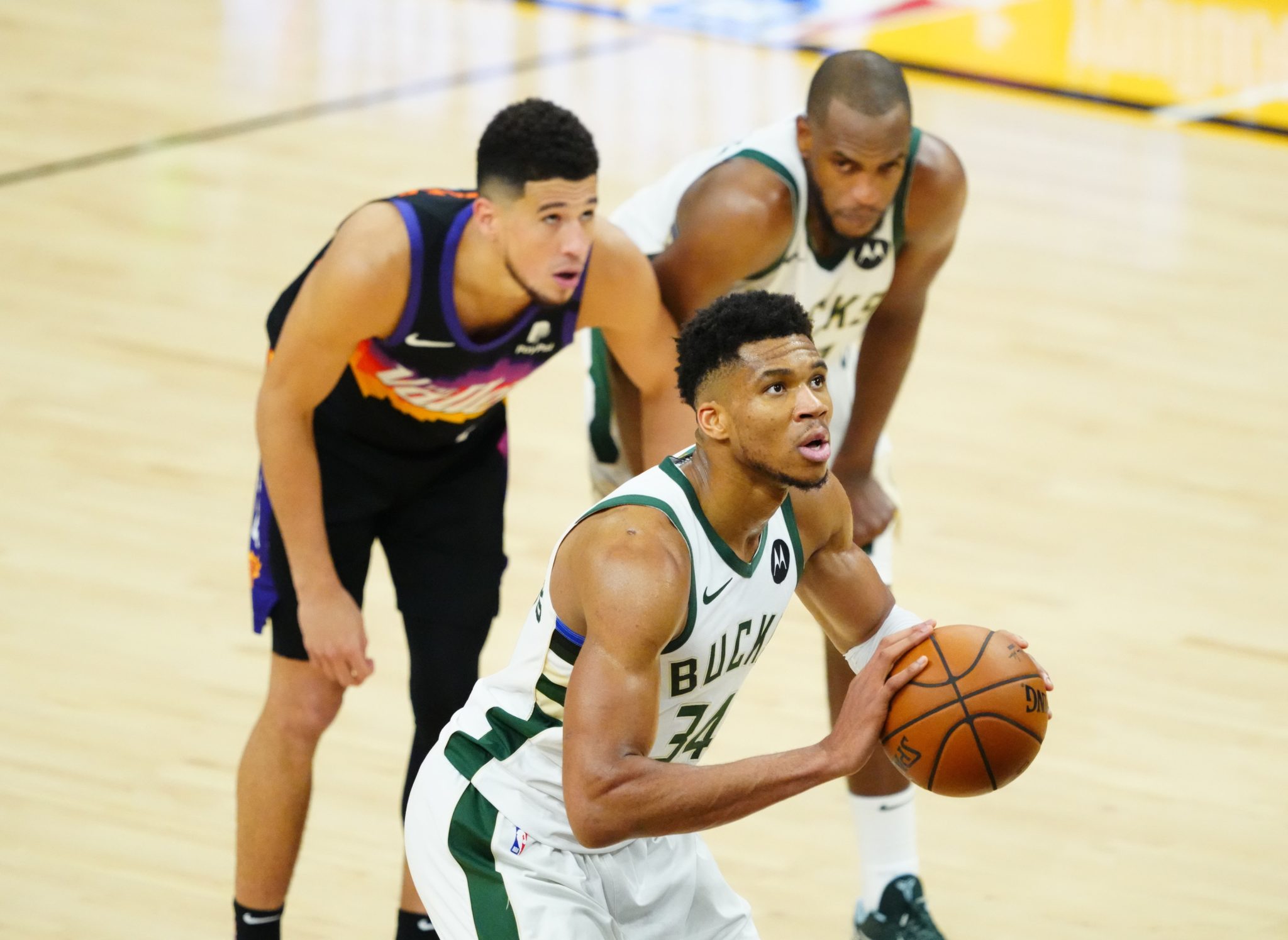 New players who sign up and make an initial deposit on FanDuel Sportsbook can get 30-1 odds on either team in Game 1. A $5 wager will net new users a payout of $150 if their team wins.

So this brings us to our main question, how likely is it that the Bucks win game 2 tonight?

Get 30-1 odds on the Bucks or Suns on FanDuel Sportsbook by clicking right here.

How often does the away team win game 2, after losing game 1?

To go further, I removed the seasons where a four game sweep occurred. Essentially, I’m removing from our data NBA Finals series where one team was overwhelmingly better than the other, and thus, one team was swept in four straight games. This occurred in 2018, 2007, 2002 and 1995. I’m also going to include 2017 which was basically a sweep even though Cleveland stole game 4 and prolonged the inevitable loss to the Warriors by one game. Interestingly, the 1995 sweep involved the away team doing the sweep – the only time this happened during this time span. This is when the Houston Rockets knocked out the Orlando Magic in four games. As a Magic fan, I can say this pains me greatly.

So this is four series where the home game won game 1 and went on to sweep (remember we’re including the 5-game series in 2017 which wasn’t technically a sweep). This changes our data to 10 of 19 (or 53%) where the away team wins game 2 after losing game 1 in an NBA Finals series. Is that enough to act? That’s your call. Of course, we’re assuming here that the Bucks and Suns are even enough to where the Suns won’t sweep the Bucks. While I’m confident in saying that the teams are even enough, the Giannis injury complicates it somewhat.

How have the Bucks fared this Playoffs after losing games?

The Bucks dominated the Heat in the first series of the playoffs, sweeping them 4-0.

Against the Hawks in the Eastern Finals, the Bucks lost game 1 then went on to tie the series with a game 2 win. The Bucks went on to win the series 4-2.

New players who sign up and make an initial deposit on FanDuel Sportsbook can get 30-1 odds on either team in Game 1. A $5 wager will net new users a payout of $150 if their team wins.

Will Giannis bounce back?

Giannis’s 20 points in game 1 against the Suns was his lowest point total since the game 2 loss against Brooklyn where he scored 18. Giannis bounced back with an impressive 33 and 14 night in game 3 following the disappointing game 2 performance.

What do the odds say?

According to FanDuel, the Suns are a 5-point favorite in game 2 over the Bucks.