Titans wide receiver A.J. Brown had a terrific 2nd season in the NFL, hauling in 11 touchdowns and breaking the 1,000 barrier while being named to his 1st Pro Bowl.

Against the Ravens in the AFC Wild Card Game on Sunday, Brown made 6 catches for 83 yards and a touchdown despite entering the game with injuries to both his knee and hand. It wasn’t enough as Tennessee fell to Baltimore by a final score of 20-13.

After advancing to the AFC Championship Game against eventual Super Bowl champion Kansas City, the Titans’ season comes to an end. And the former Ole Miss star was naturally frustrated after the defeat, and took to Twitter to air his feelings out.

“I will be the best in the league one day! Save this tweet!” he tweeted.

However, moments later, he deleted the tweet, simply posting, “God I thank you!”

God I thank you!

We’ve seen athletes tweet things only to later delete the message after having second thoughts, so obviously Brown felt his initial reaction was a bit too driven by emotion. Either way, one can get the sense that this loss will take a little time for him to get over. 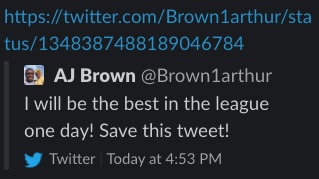