High school coach to Ole Miss: 'Get ready to get skull-drug'

If there’s one thing we’ve learned anything on Wednesday, it’s that you don’t cross St. Stanisclaus football coach Bill Conides.

The high school coach from South Mississippi had one of his players receive a scholarship offer from Mississippi State today, which should be a happy moment.

But just hours later, he took to Twitter to let the Ole Miss coaching staff know how he felt about their perceived lack of interest in players from his area: 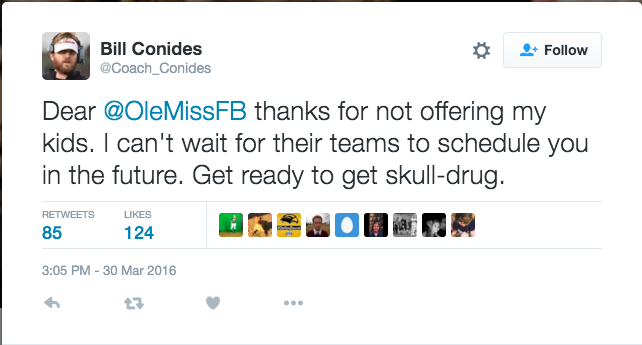 For those of you wondering exactly what “skull-drug” means, we’ve taken the liberty of consulting UrbanDictionary.com for some unofficial takes on the term. (Warning: Language)

According to a report from The Sun Herald, Conides says the Tweet was not sour grapes over a missed offer, rather a boiling over of long-term frustrations.

“Well, unfortunately for Ole Miss, folks in the SEC know what our young men can do and have offered. It’s going to be sweet revenge on some Saturdays.”

“The funny thing is, and it’s just the way things work with social media, I put it out on Twitter and then Matt Luke, who is responsible for our area, texted me and said ‘Hey, Coach. I’d like to talk to you about your last tweet,’” Conides said. “He has tried to call me and Facetime me all of a sudden out of nowhere.

Nick Cole
Nick Cole is a former print journalist with several years of experience covering the SEC. Born and raised in SEC country, he has taken in the game-day experience at all 14 stadiums.