It’s difficult to imagine anyone else, at least in the coaching profession, who loves the recruiting process more than Ole Miss coach Lane Kiffin. As the Early Signing Period opened on Wednesday, Kffin lit up social media with several versions of “Flipmas,” from t-shirts to hashtags.

Kiffin was especially excited to land MJ Daniels, who originally committed to Ole Miss during the Matt Luke era but backed off that pledge in June. In late September, leading up to the start of the 2020 SEC season, Daniels announced his commitment to Mississippi State. Kiffin tweeted and retweeted several versions of “Merry Flipmas” and then retweeted Daniels saying he was “staying home” with Mississippi State in September.

The 6-foot-3, 200-pound Daniels is rated as a three-star prospect, the No. 7 overall prospect from the state of Mississippi and the nation’s No. 26 athlete in the country for the 2021 recruiting cycle by 247Sports Composite Rankings.

“Coach Kiffin and his staff have stayed on me hard for the past couple of weeks and I finally gave them time to talk,” Daniels told Rivals’ Chad Simmons. “I learned coach Kiffin has a plan for me, and I know with me going there it helps us get closer to our end goal, and that’s winning a championship.” 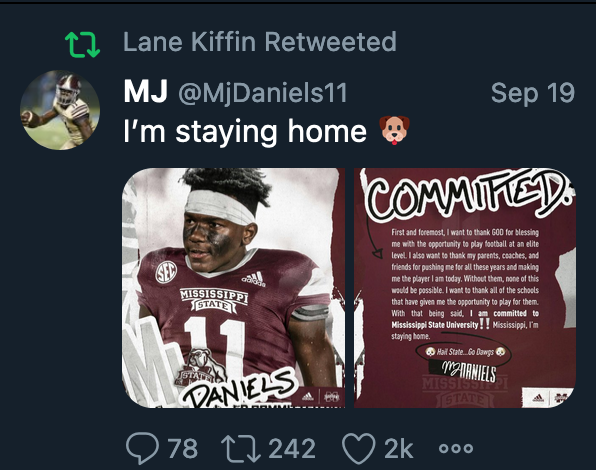