Lane Kiffin has decided to directly address a social media rumor about his personal life.

The Ole Miss head coach recently quote-tweeted a Mississippi State fan saying Kiffin got a former Ole Miss cheerleader pregnant. Kiffin mocked the usage of “done knocked up,” calling it the “best part of the rumor,” using a laughing emoji. 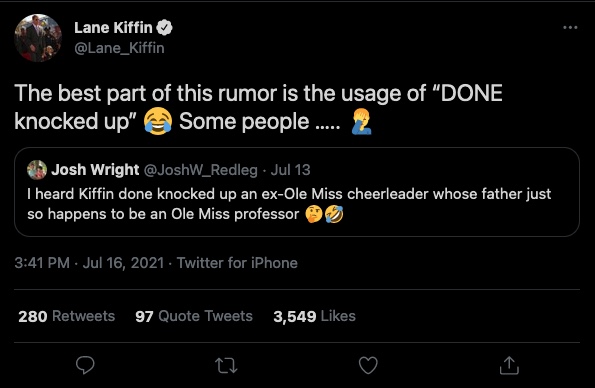 Rashad Milligan of the Clarion Ledger noted that another Twitter user shared a screenshot adding details to the rumor.

Kiffin has nearly 488,000 followers on Twitter, so his quote-tweet was likely the first time hearing of the rumor for people outside of the Ole Miss and Mississippi State fandoms. Kiffin is scheduled to speak on Day 2 of SEC Media Days on Tuesday in Hoover, Alabama.