The goals for the Rebels defense were to tackle better, and to force quarterbacks to make bad throws by applying pressure and forcing them from the pocket.

Let’s just say that Rebels defensive coordinator Mike MacIntyre was all smiles after the game.

Behind a rushing attack that accounted for 413 yards, Ole Miss did what it needed, leaving six wins attainable.

Here are this week’s grades in the win.

Corral’s services weren’t needed as Plumlee led a potent rushing attack with 165 yards and a score. All three running backs scored in this one, with gaudy averages as well, with no one averaging less than 5.6 yards per carry.

The offensive line, under the direction of coach Jack Bicknell Jr., has been superb this season. The position looked thin, but Bicknell and offensive coordinator Rich Rodriguez have found a nice rotation at left tackle with senior Michael Howard and freshman Nick Broeker. Ben Brown, who normally plays left guard, has gotten a few snaps at center. The Rebels are also doing all they can to get valuable reps to freshmen like Jalen Cunningham.

While the running game has gone well, the passing department has had its struggles. Plumlee does not have the arm strength he needs, and he threw for only 99 yards against the Commodores, going 10-for-18. In his defense, the Ole Miss wide receiving corps is going to have to evolve to do better than just Elijah Moore. It has to get better, quickly.

This is something to keep an eye on. If it doesn’t improve and Plumlee continues to be under center, you can bet teams will begin putting eight or nine men in the box and forcing the youngster to throw.

Without question, this was the best effort the unit has produced under MacIntyre. The Rebels were led by Lakia Henry, who was one of the top linebackers in the junior college system last season. Henry had 15 tackles, one sack and one tackle for loss in his best game as a Rebel.

The Commodores were stifled all night, rushing for only 62 yards. The young secondary held the Dores to 202 yards through the air.

The biggest stat could be that the Rebs held Ke’Shawn Vaughn to 69 yards on 18 carries, an average of just 3.8 yards per carry. It was a tremendous night for the defense. 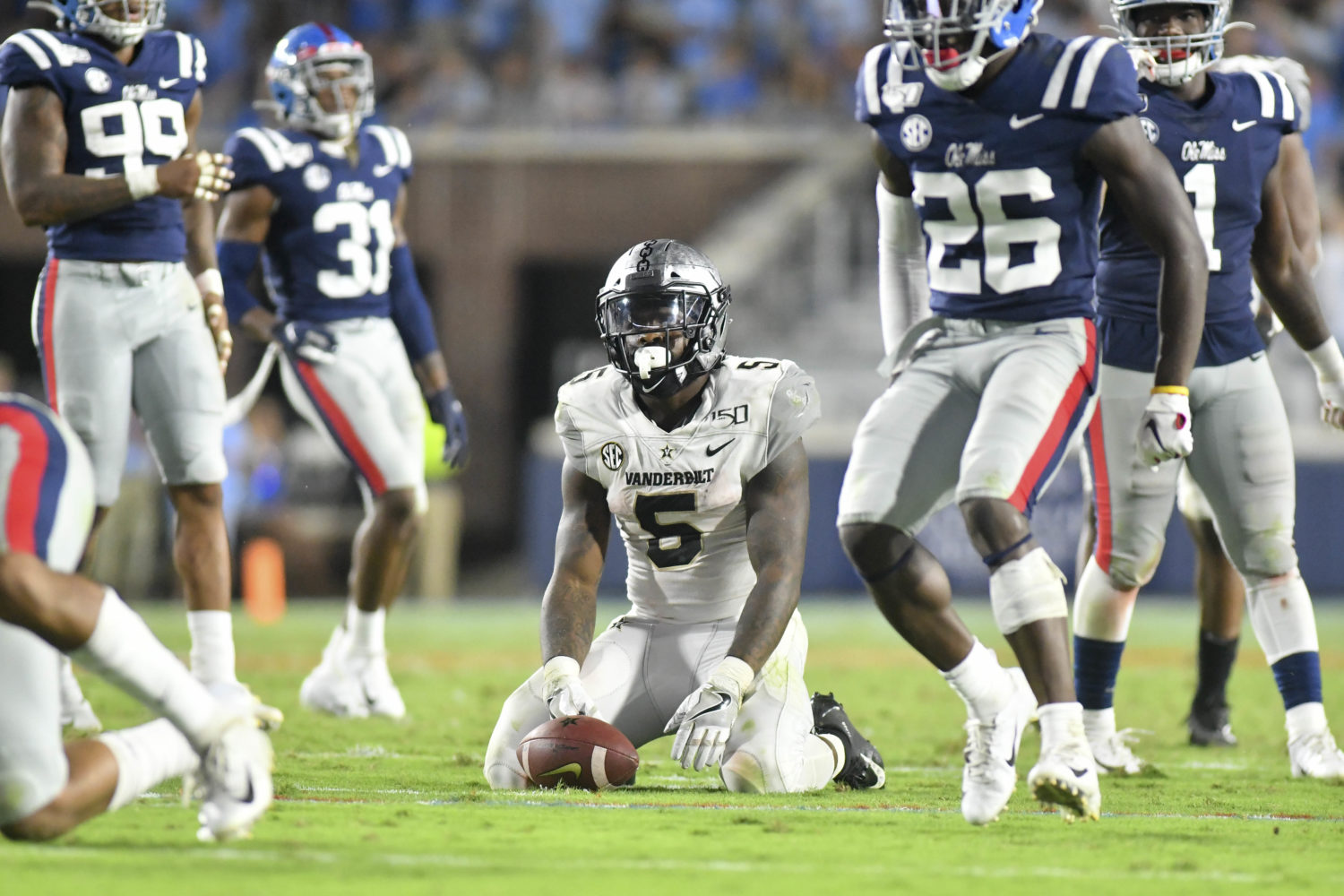 At one point, the secondary had freshmen Jay Stanley, Deantre Prince and A.J. Finley on the field.

You now see why MacIntyre was smiling in the postgame press conference.

It was another banner day for Ole Miss punter Mac Brown, highlighted by a 65-yard bomb. Brown also pinned the Dores inside the 20-yard line twice and finished with an average of 44.8 yards.

Luke Logan continues to improve as the placekicker, nailing all of his PATs and connecting on the only field goal of the day from 41 yards out.

Ole Miss will be ready for the Missouri Tigers next week, when it travels to Columbia. The Tigers (4-1, 1-0) have questions swirling at quarterback, as Kelly Bryant left the win over Troy with an apparent knee injury. Head coach Barry Odom is hopeful for his return.

Should the Rebels find a way to win in Columbia, they will take one more step toward the six-win mark. It will not be easy, as the Tigers are No. 3 in the country in total defense, allowing 231.3 yards per game.

Ole Miss will have its hands full.

“We have to give it to the defensive line. We made a big emphasis on pressure. The confidence is high and the swagger is showing and we’re just playing football. (The freshmen) are bringing their own confidence to the group.” — Ole Miss defensive back Jaylon Jones

“Not only can (Plumlee) run it, he can throw it. I am having lots of fun, the most fun I’ve had in my life. We have a big freshman class, and we want to keep it rolling, just keep getting better each day.” — Ealy

“We improved today, much tighter in coverage and did extra pass scale (this week in practice). I thought the defensive line harassed the quarterback all night. I thought we tackled well, running back-wise, we just tackled better. After watching last week, we had to be in better positions, and tonight we recognized gaps and played much better in the passing game.” — MacIntyre