The fake dorsal against the helmet has become a symbol for Ole Miss’ defensive prowess under coach Hugh Freeze.

On Saturday, an official instructed an Ole Miss player to stop the team’s trademark Landshark celebration, as this video clearly shows.

Ole Miss athletic director Ross Bjork joined the ensuing discussion via Twitter, defending the gesture as long as the players stay within the rules.

@JustinKing @OleMiss We believe this was isolated. our players know the rules & know how they can do the Landshark!

@JustinKing@OleMiss As long as we dont taunt the other team/bench or make it an extended celebration, we can do the Landshark — Ross Bjork (@RossBjorkAD) October 19, 2014

Several other programs have long-standing hand gestures pre-dating the Landshark, as one of our readers pointed out this weekend. 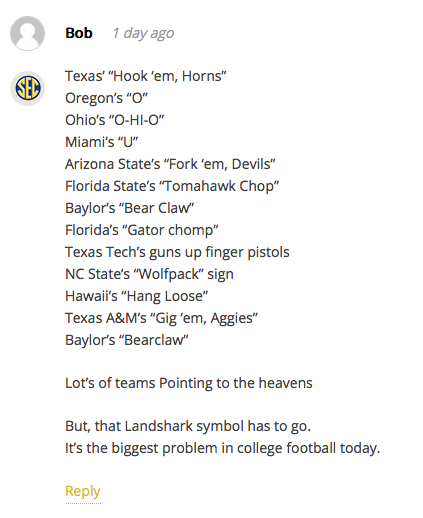