The Razorbacks enter Week 7 with a 4-2 record overall, though it’s the 0-2 mark against SEC opponents that Arkansas will look to improve upon when it hosts West Division rival Ole Miss on Saturday.

After beating non-conference foe Memphis 48-28 two weekends ago, the Rebels march into Fayetteville with a 3-2 (1-1 SEC) record, but Ole Miss has lost its last two meetings against the Hogs, including a 30-0 beatdown in Arkansas in 2014.

Kickoff is set for 7 p.m. ET, and the game will be televised nationally on ESPN.

Here’s a closer look at how these SEC West rivals match up head-to-head.

QB Austin Allen vs. Ole Miss pass defense: No spotlight has been too bright for the first-year quarterback as he’s been one of the most consistent contributors for the Razorbacks’ offense through the first six weeks of the season. So far, Allen has completed 119-of-187 pass attempts for 1,632 yards, 15 touchdowns and 5 interceptions. 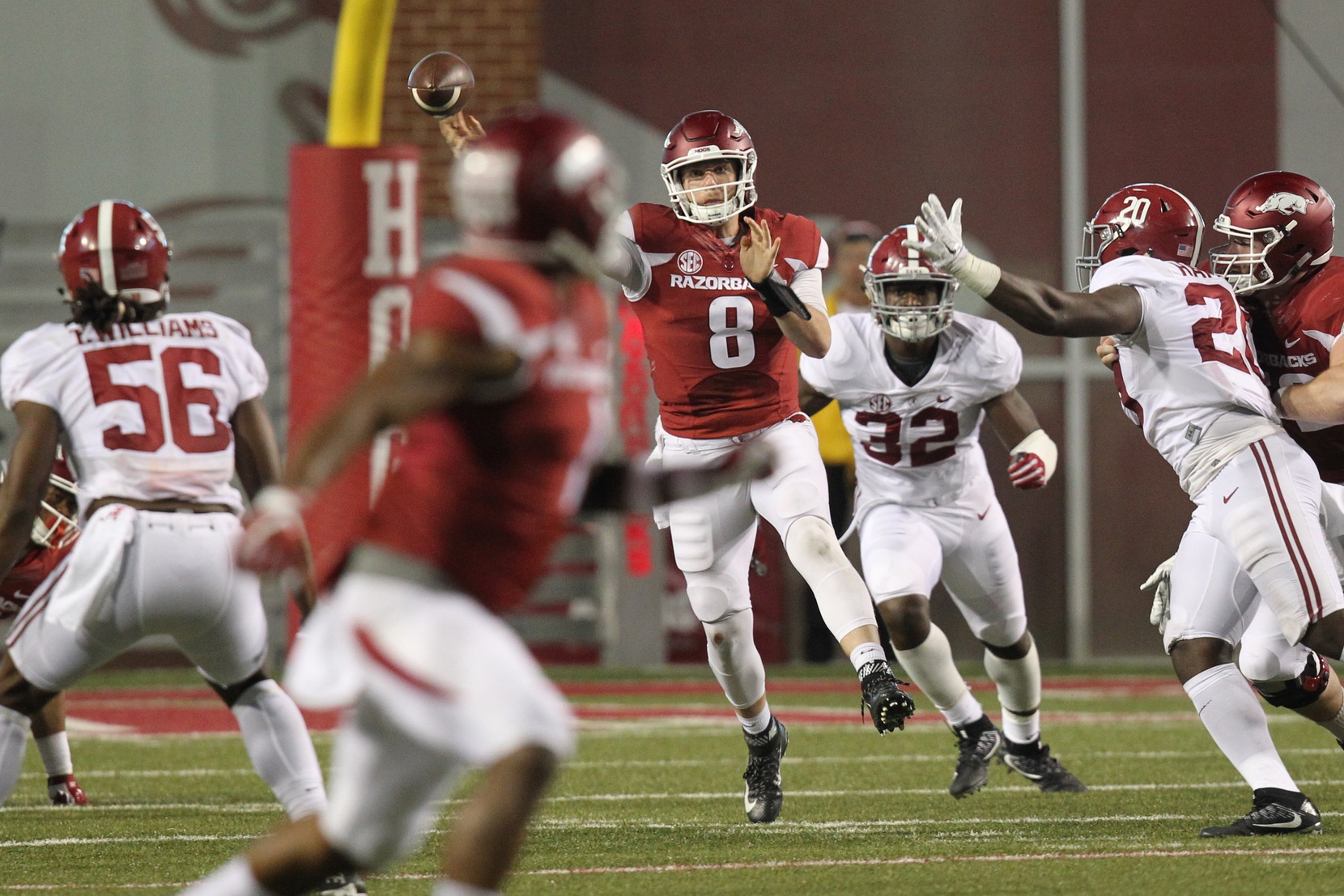 He ranks near the top of every statistical category amongst SEC quarterbacks as his 1,632 passing yards rank second in the conference behind Missouri signal-caller Drew Lock, and the only quarterback who bests his 158.1 passer rating is Chad Kelly, who will be behind center for Ole Miss on Saturday.

Although the Rebels have only allowed opponents to score two passing touchdowns this season, Allen proved he can lead scoring drives when he threw for 400 yards and 3 TDs against Alabama last Saturday. After throwing three interceptions against the Crimson Tide, Allen should be able to make better decisions against Ole Miss, which has only picked off four passes through five games.

RB Rawleigh Williams III/ Devwah Whaley vs. Ole Miss run defense: Between Williams and Whaley, the Arkansas run game has at times been stellar thus far. Even though Williams (113 carries, 605 yards, 5 TDs) receives the bulk of the carries, offensive coordinator Dan Enos hasn’t been afraid to put the ball in the hands of Whaley during his first year with the Hogs.

With 241 yards and a touchdown on 38 carries, Whaley’s numbers pale in comparison to Williams’. However, the true freshman has showcased big-play capabilities, which could bode well for Arkansas against an Ole Miss run defense that has been anything but perfect.

After struggling against Alabama (36 carries, 73 yards) last week, the Razorbacks should be able to bounce back with a better performance in the running game on Saturday.

Arkansas WRs vs. Ole Miss DBs: A quarterback is only as good as his receivers, and Allen has made the most of his talented arsenal. A pair of receivers — Jared Cornelius (408 yards, 4 TDs) and Keon Hatcher (320 yards, 5 TDs) — have been his favorite targets, though Drew Morgan (344 yards, 1 TD) has also proven to be a viable target thus far.

In addition to three receivers, tight end Jeremy Sprinkle (194 yards, 4 TDs) provides Allen with another big target when the Razorbacks get down near the goal line.

Through its first five games, Ole Miss has done a good job of keeping opposing pass-catchers out of the end zone. But on Saturday, the Rebels’ secondary may be facing its most difficult test yet, especially considering how Allen has been performing.

WHEN OLE MISS HAS THE BALL

QB Chad Kelly vs. Arkansas pass defense: The Razorbacks’ defense has the benefit of going against Allen in practice each week, but even that may not be enough to prepare for Kelly. 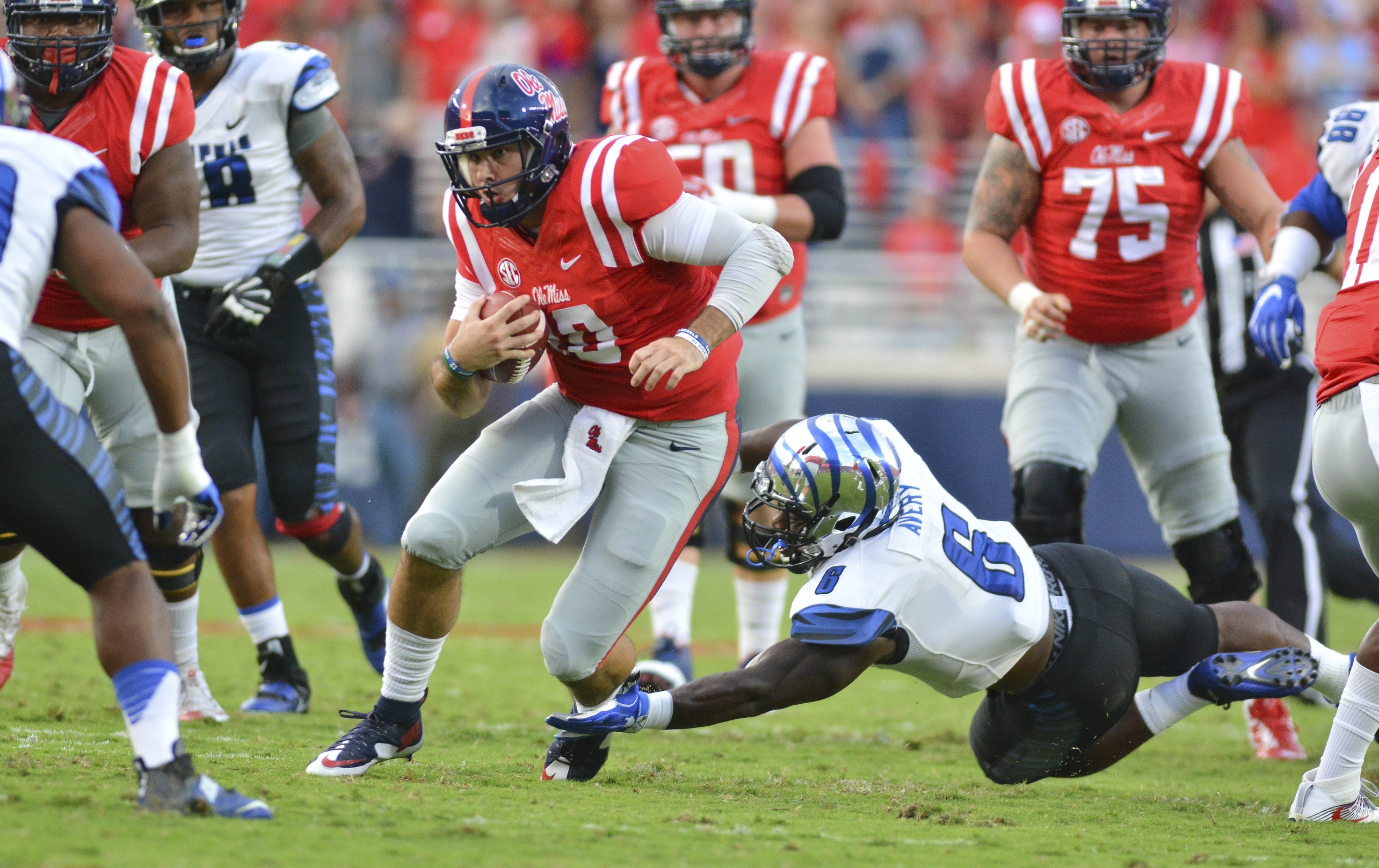 Through five games, the Ole Miss gunslinger has completed 115-of-174 pass attempts for 1,596 yards and 13 touchdowns. After throwing three interceptions against Florida State in the Rebels’ season-opener, Kelly went three straight games without throwing a pick before Memphis accomplished the feat last weekend.

Even though Arkansas has at times used interceptions to spark momentum for the team, Kelly’s combined stats against Alabama and Georgia (703 yards, 5 TDs, 0 INTs) prove he has been at his best against SEC opponents.

RB Akeem Judd/ Eugene Brazley vs. Arkansas run defense: With Kelly at the helm, the Ole Miss offense hasn’t had to rely on its running game very much this season.

Still, Judd and Brazley have shown they’re capable of moving the sticks in the early part of this season. Judd leads the team with 302 yards and a pair of touchdowns on 56 carries, while Brazley (181 yards, 2 TDs) has been a viable option when the Rebels’ No. 1 back needs a blow.

Amazingly, the longest touchdown Ole Miss has scored on the ground belongs to Kelly, who busted loose for a 41-yard score when the Rebels steamrolled Georgia 45-14 in Week 4. After allowing Alabama to run wild for 264 yards and 3 TDs last weekend, it’s tough to give Arkansas an edge in this category.

Ole Miss WRs vs. Arkansas DBs: Like Allen and the Hogs, Kelly and the Rebels have various talented targets at their disposal.

Evan Engram (30 catches, 479 yards, 4 TDs) is a challenge for any defense, and both Damore’ea Stringfellow (305 yards, 2 TDs) and Van Jefferson (244 yards, 1 TD) have the skillset to go for big gains as both enter Saturday with 44-yard catches on their résumés.

While those three targets account for seven touchdown catches, nine different players have caught touchdown passes for Ole Miss this season. Between the deep arsenal at his disposal, and the talent Kelly possess behind center, Saturday may be a track meet for the Hogs’ secondary.

Both teams’ special teams have flaws, though Ole Miss place kicker Gary Wunderlich at least gives the Rebels some stability if the game is close late in the fourth quarter. Through five games, Wunderlich has made all 25 of his extra-point tries and has connected on all seven field goals he has attempted inside of 50 yards.

The Razorbacks, meanwhile, broke in a new place kicker against the Crimson Tide last weekend. After replacing Cole Hedlund, who struggled out of the gates, senior Adam McFain was a perfect 3-for-3 on extra points and hit a 25-yard field goal against Alabama.

As good as Wunderlich has been, the Rebels have been atrocious on punt returns, allowing opponents to average 24.5 yards per run back. Utah State (24.6) and Florida State (24.63) are the only teams whose punt coverage has been worse than Ole Miss.

Still, even if the Hogs are able to use punt returns to set up their offense, this game may come down to 3 points late in the game. If that is indeed the case, there’s no question who has the edge.