It felt like by the end of the longest offseason on record, there was nothing new left to learn.

No spring games, limited media availability and a cloud hanging over the entire offseason. It was, as we know, not ideal.

Hence, the beauty of Saturday.

We finally got to get some insight as to who these teams are. Four new coaches are in the SEC, and only five of the Week 1 starting quarterbacks from last year got the nod to kick off 2020.

So without further ado, here’s the first installment of “1 thing I learned about every SEC team.”

So, could you tell that he hadn’t played in a game since the 2018 season? Because I couldn’t. Moses was everywhere. Saturday served as such a great reminder for why his presence was missed so much last year when he suffered a season-ending injury in fall camp. We saw him go sideline to sideline and make plays like he was in his peak 2018 form. Good. That’s exactly what Alabama needs to get back to having a prototypical Nick Saban defense. You can’t teach speed like this:

And another huge tackle from Dylan Moses. The senior from Baton Rouge came to play today! pic.twitter.com/rLuEmS9ouj

To be fair, that’s what I thought when Barry Odom was hired. I was ready for Arkansas to be much better than it was under John Chavis. For a good portion of that game, it was. Georgia didn’t have a first-half touchdown even though it had a massive advantage in terms of blue-chip recruits. Bumper Pool and Dorian Gerald were huge for Odom’s defense. Sure the wheels fell off late, and part of that was a result of a pick-6. But Arkansas forced D’Wan Mathis out, and George Pickens and Zamir White were held to a combined 127 yards. The Hogs already pursue and tackle better than they did in the Chad Morris era, which is a promising sign after the offseason that was.

I was dead wrong on this. Dead. Wrong. I had so many more questions about Auburn than I did Kentucky. As a result, I thought the ‘Cats would be able to control the line of scrimmage and win this game. Nope. There’s a reason why Steele is the highest-paid defensive coordinator in America. He still found ways to dial up pressure and force Terry Wilson into some tough spots. And say what you want about the non-touchdown call at the goal line, but Steele’s unit was ready for a surprising pass, which resulted in Roger McCreary’s interception in the end zone. There’s a reason why we always pencil Auburn in for an elite defense, even after losing a pair of generational players on the defensive line. Saturday was a good reminder of Steele’s brilliance.

Florida — There is no skipping a beat without 4 NFL receivers

So, um, are we sure that the Gators lost four receivers to the NFL? Like, we’re positive? It didn’t look like that. Kyle Trask was able to do whatever he wanted. Six touchdowns in a season debut is darned impressive, though not as impressive as setting a school record for yards in an SEC game. Kyle Pitts was a big part of that. There wasn’t an answer for him, and Trevon Grimes looked the part. Oh, and that was as good as Kadarius Toney has looked since … ever? Man, the Gators are stockpiled with weapons. It won’t always be that easy, but Trask certainly made it look like he’ll be awfully tough to stop in 2020. 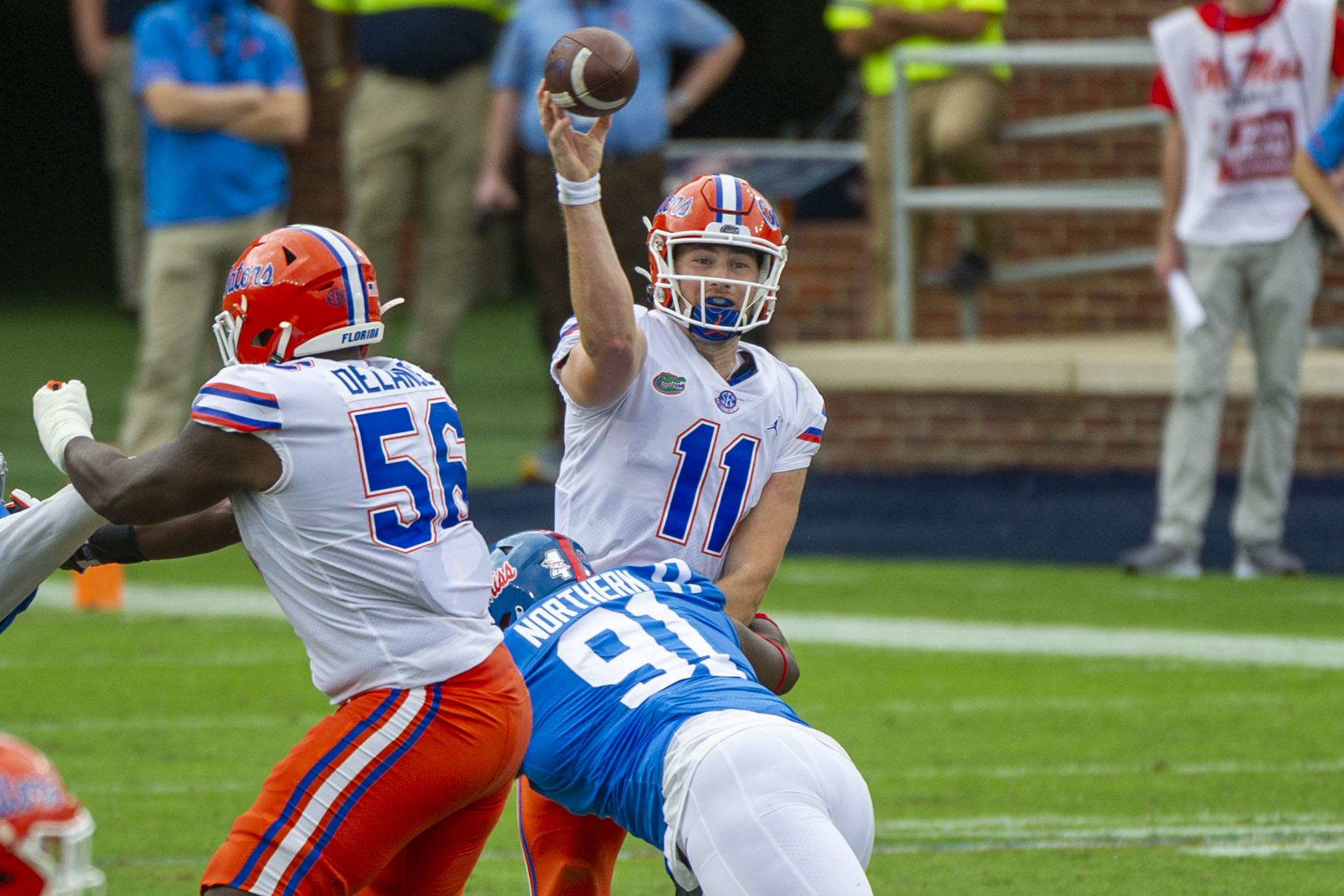 While Arkansas certainly deserves credit for that defensive showing, wow, Mathis clearly didn’t look prepared. The redshirt freshman’s first career start was a nightmare. It was night and day compared to the performance of Stetson Bennett IV. Go figure. Mathis struggled to make reads, and the game looked too fast. That was against Arkansas, remember. The fact that Kirby Smart recognized Mathis wasn’t ready by the start of the second quarter was telling. JT Daniels wasn’t physically cleared to play. Call me crazy, but it seems like his presence will be welcomed with open arms.

Kentucky — The ground game isn’t in midseason form yet

I was waiting for the group that looked like it imposed its will down the stretch last year. Obviously, I knew that it would look different without Lynn Bowden, but with the three-headed backfield duo and those three stud offensive linemen, I wanted to see the ‘Cats dominate on the ground. I thought that happened early, but then Eddie Gran got away from that. If you take away Kavosiey Smoke’s 35-yard touchdown run, Kentucky had 39 carries for 110 yards. Three yards per carry ain’t gonna beat a top-10 team with a Kevin Steele defense on the road.

And neither will this:

Kentucky with the best fake punt EVER 💪🏻

OK, that’s a cheap shot. I’m a believer in Kentucky’s smash-mouth identity, but Saturday was certainly a letdown.

Sorry, Ed Orgeron. That’s not happening. And while I admit that having Derek Stingley Jr. out with a non-COVID-19  illness hurt the Tigers, MSU had the best passing day in SEC history. One guy wasn’t flipping that around. What an awful debut that was for Bo Pelini’s defense. It wasn’t just that LSU looked young and inexperienced. It was that it was somehow in man defense for far too much of the day. If there were adjustments, they certainly weren’t evident. LSU couldn’t stop those short crossing routes, and nobody could stay with Kylin Hill. LSU will have better days, but man, outside of Jacoby Stevens forcing a fumble and Jabril Cox getting a pick-6, that was a nightmare opening statement from the defending champs.

Robinson ended the mystery by starting for Mizzou, and even though we saw Connor Bazelak early in the second quarter and in garbage time, it’s clear that Eli Drinkwitz trusts the TCU transfer. How long that lasts remains to be seen, especially with such a grueling schedule. Drinkwitz gave Robinson a pretty good talking to when he inexplicably took an awful sack when Mizzou was driving in the red zone. Robinson salvaged some of his numbers late with Alabama blowing an assignment on a wide-open Tyler Badie, but it wasn’t exactly the performance Drinkwitz was probably hoping for against an elite defense. It was a “welcome to the SEC” sort of night for Robinson and Drinkwitz.

I get that LSU was dealing with major attrition across the board, and it wasn’t a typical Death Valley crowd. But I’d say Leach’s offense having the best passing day in SEC history is a pretty good sign for Week 1. K.J. Costello wasn’t perfect, but he stayed poised all day. The connection the Stanford transfer had with his pass-catchers was beyond what anyone could’ve expected. The Bulldogs were obviously going to improve significantly from the nation’s No. 109 passing offense, but Saturday wasn’t a slight improvement. It was a revelation. Leach’s offense is going to test SEC defenses in a way that they’re not used to, and if they aren’t willing to adjust like Bo Pelini, it’s going to light up scoreboards.

Let me be clear when I say I wouldn’t want to have a legitimate rooting interest in Ole Miss. I think it would take years off my life. But if you’re not an Ole Miss fan, Saturday showed you why Lane Kiffin’s squad is must-see TV. They can throw deep and take advantage of a matchup with Matt Corral and Elijah Moore, Kiffin can use all sorts of wrinkles with weapons like John Rhys Plumlee and Jerrion Ealy, and they don’t play much defense yet. That’s the perfect “all hell can break loose at any moment” team. Tune in to Kiffin’s squad every Saturday. You won’t be disappointed.

Elijah Moore with 170 on the game and more to come! #OleMiss @TheRebelWalk pic.twitter.com/p2Cln71IdJ

Where would the Gamecocks offense have been without Smith? I found myself wondering that as Smith hauled in catch after catch. Granted, it wasn’t good enough to lead South Carolina to a comeback victory, but it was at least promising that in the post-Bryan Edwards era, the Gamecocks have a legit go-to wideout who’s on the same page with Hill. Outside of him, though? Yeah, I don’t know. Xavier Legette showed flashes, but obviously experience is a factor there. We know that South Carolina needs help at receiver. You don’t have two former quarterbacks playing there unless that’s the case. But Hill and Smith being on the same page so early should certainly help while those other connections are established.

Tennessee — The latter-half 2019 magic is still there

Not to take away anything from what Tennessee did, especially the late scoring drive with Jarrett Guarantano connecting with Josh Palmer, but that was another nail-biting win that the Vols somehow pulled off. This time, the clincher was an inadvertent punt touch by South Carolina that prevented a potential go-ahead touchdown drive from ever starting. Go figure that Tennessee now has the SEC’s longest active winning streak at 7 games. Tennessee didn’t look like a complete team, and the special teams miscues could’ve been costly. But instead of finding a way to lose a game like it did last September, Tennessee looked more like the team that made the right halftime adjustments and found a way to close a tight game like it did in the latter half of 2019. That’s a good sign.

Texas A&M — This offense is really feeling those losses

We shouldn’t be saying that in Year 3 of the Jimbo Fisher era with the SEC’s most experienced quarterback. Oh, and about a program with consecutive top-6 classes. But yeah, it was obvious that A&M was desperately missing all of those pass-catchers from 2019. Kendrick Rogers and Quartney Davis left early for the NFL, Camron Buckley suffered a season-ending injury in fall camp and Jhamon Ausbon opted out. Against a Vandy defense that has had no shortage of opt-outs and issues of its own, scoring 17 points at home was … not great. Kellen Mond fumbled several times, Vandy loaded the box and it was a sluggish offensive performance if there ever was one.

I wrote off that group after last year’s struggles, especially when Tae Daley entered the transfer portal just before the start of the season. But against an A&M offense that had an experienced starting quarterback on the road, the Commodores held their own. They forced Mond to make tough decisions, they got a push at the line of scrimmage, and they kept their new-look offense in the ballgame. While we saw some defenses like Florida and LSU struggle to tackle, Vandy actually did that against a team with much more talent. That was about as encouraging a start as Vandy could’ve hoped for.