Oh, Alabama, we’ll get to you in a minute … A lot of wild stuff happened long before the Iron Bowl.

The craziest, without question, occurred in the Egg Bowl.

What in the literal … was Elijah Moore thinking? 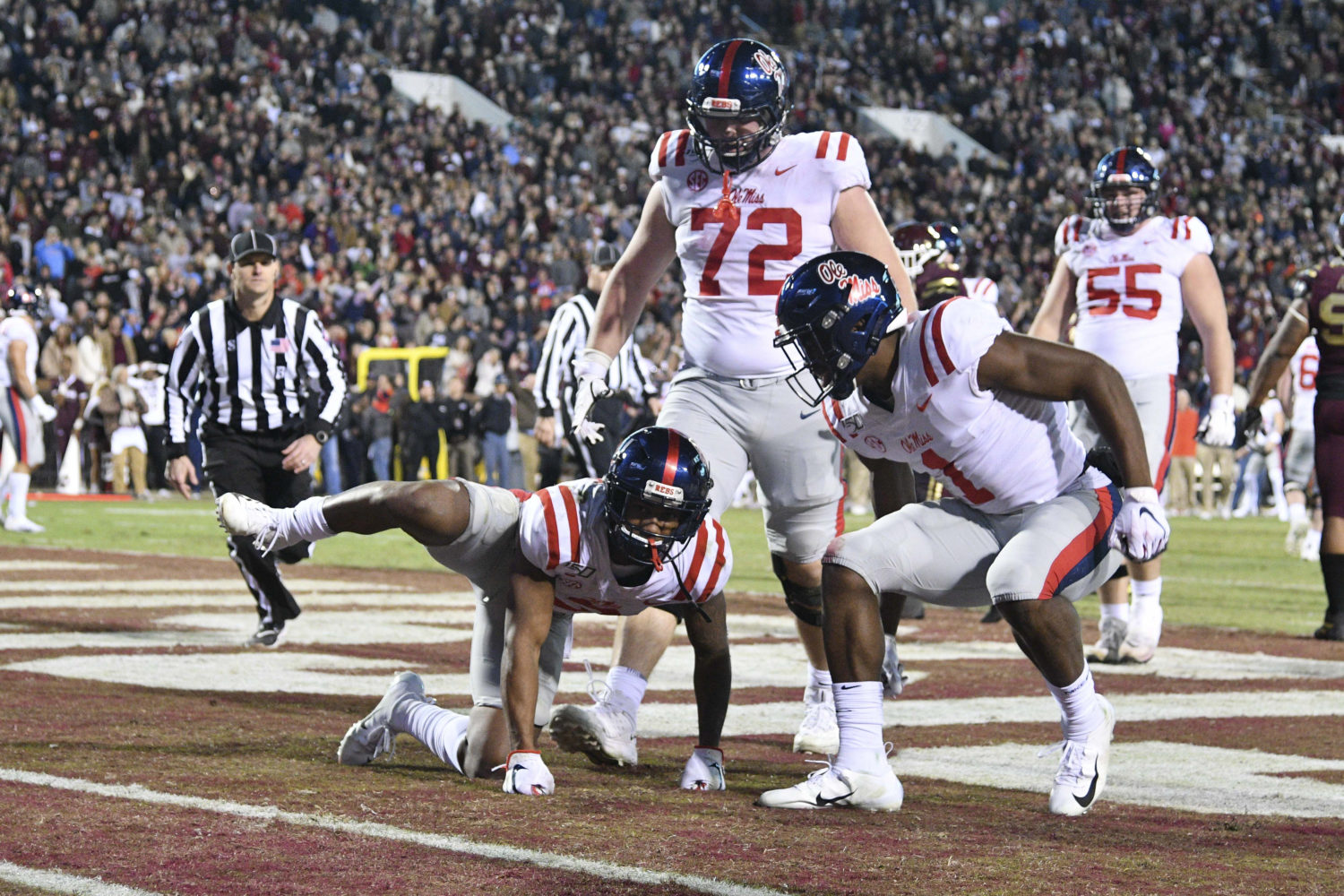 Of course Moore is from Florida. I didn’t even need to look it up. No other state in our fine country produces more people capable of cultivating such compelling headlines. We grow crazy like the Midwest grows corn. It’s our gift to America, really. I hope you’re entertained. I live here. I have to deal with this stuff every day.

A few thoughts immediately came to mind as Moore began to, um, celebrate? what should have been the greatest football play of his life.

First time in Egg Bowl history that the winner was decided by a penalty and missed Pee-A-T…pic.twitter.com/MHjkPaoIMA

It looked scripted, especially considering DK Metcalf was flagged for a similar celebration in 2017, but I’m not sure whether the better answer is “yes” or “no.”

2. I’m glad he wasn’t playing against the USC Trojans.

3. The scene from Top Gun, where Maverick is admonished after pulling his circus-stunt fly by.

Coaches and parents try to prepare for everything, anticipate the unexpected, have a plan just in case.

Then wildcards like Maverick show up and you start to question your career choices.

I’m quite certain Matt Luke prepared the Rebels for just about every wrinkle Mississippi State could possibly throw at them.

Reminding his team they can’t pretend to pee after a touchdown? I doubt that was part of prep week.

I can only picture Luke concluding the final team gathering and saying: “That just about covers the dog-pee celebrations.”

9. Can you imagine if that play ends Matt Luke’s tenure in Oxford?

If so, what a crappy way to go out.

8. Barry Odom’s contract — not performance — made this a very easy call

Some will insist Mizzou’s decision is a clear signal that the Tigers see themselves as SEC East contenders. That’s certainly the message Mizzou wants to send.

But let’s also be honest: If he had a Will Muschamp type buyout, I’m guessing he’s still the coach. His buyout is a meager $2.85M  — less than a full year’s salary — and will be offset by any money he makes in his next stop. There simply was no financial penalty for making a change. In that regard, it was a very easy decision.

The reality awaiting the next coach: Mizzou finished 6-6, which is 1 win more than I predicted in the offseason. It’s still lagging in recruiting, which certainly won’t get better before the Early Signing Period.

The good news: If you’re a prospective coach hoping to land in the SEC, this is a far better situation than Arkansas for the simple reason it’s not in the SEC West.

7. The flip side is … South Carolina

Will Muschamp is 26-25 after getting blown out again Saturday by Clemson to finish this season 4-8. If Muschamp’s buyout were even slightly below “outrageous,” the Gamecocks would be looking for a new coach next week, too. They still might be.

Everybody likes big numbers, right? Here’s one for you: 94. That’s Clemson’s combined point total in the past 2 games against South Carolina — the most by either team in any 2-year stretch in their series history.

Kentucky’s 1-man show won’t win any national offensive player of the year awards, but he’s clearly been the America’s Most Versatile Player.

He did it again Saturday against rival Louisville.

.@LynnBowden_1 put on an absolute clinic against Louisville:

The most rushing yards by a QB in a game in SEC history 🔥 pic.twitter.com/wvR645bCsg

The worst of the weak, in order of ineptitude, because the alphabet is far too forgiving.

1. Michigan’s defense (Big Ten): It’s bad enough to lose 8 consecutive games to your rival, Ohio State. It’s something else entirely when the Buckeyes topped 30 in the past 7 — and hit 40 in 5 of them. Obviously it’s different defenders over that span, but Ohio State scored a combined 118 points in the past 2 blowouts. That’s the first time in series history the Buckeyes reached 100 points in consecutive games.

2. Louisville’s run defense (ACC): You had 1 job: Stop Kentucky’s running game. Entering Saturday, Kentucky had thrown the ball 8, 7, 15 and 11 times in its 4 previous games with Lynn Bowden at QB. Kentucky threw 2 passes Saturday against Louisville — and ran it 40 times for 517 yards.

4. Alabama’s discipline (SEC): 13 penalties, the most in the Nick Saban era. Crushing penalties, too. They extended drives and ultimately ended the game.

Oklahoma and Utah still have a chance to lock up the No. 4 seed if Georgia loses next week in the SEC title game.

If Georgia wins, we’ll get 2 SEC teams in the Playoff for the 2nd time.

This foolish decision from Georgia’s freshman receiver led to his ejection against Georgia Tech and also will cause him to miss the first half of the SEC Championship Game against LSU.

There’s just no excuse for any of this. It doesn’t matter what was said, what was done, who did what first. Walk away. Point to the scoreboard, if you want. But walk away.

In a weekend defined by absolute, selfish nonsense, Clemson and South Carolina — bitter rivals, too — offered a respite.

Tavien Feaster, once a Tiger, always a Tiger.

Lots of love for Tavien Feaster after the game pic.twitter.com/d1MvB0lzfU

See, it’s perfectly acceptable to compete like crazy, knock the bubblesnot out of each other for 60 minutes and still be respectful afterward.

They out here stealing our women too. 😢 pic.twitter.com/CXSsHnu2GZ

(It’s all good. That’s Clemson safety Tanner Muse with his girlfriend, a member of the Gamecocks’ dancing team.)

1. Alabama has nobody to blame but itself

For the first time in the Playoff era, the Tide will be watching at home.

No doubt thinking about the missed opportunities.

Offseasons are filled with late-night “what-ifs.”

This offseason might be the most painful in the Nick Saban era.