Sonny Smith probably never thought he’d be binge-watching Denzel Washington movies this late in March. But today he’s propped up in front of a TV set, watching The Equalizer 2 (you know, the one about the retired CIA special forces agent trying to live a normal life as a Lyft driver but becomes a vigilante after a woman he knows is murdered? Yep, that one).

Smith, who reigned over Auburn basketball from 1978-89, admits he loves movies starring the famous actor and can rattle them off one by one: American Gangster, Fallen, Training Day, Remember the Titans.

Unfortunately, there’s a lot more movie watching to do these days for Smith, who laments that the NCAA Tournament will not be played this year due to concerns about the coronavirus pandemic. Through the years, Sonny’s relationship with March Madness has shifted from participant to spectator, though he’s no less enthusiastic about the game of basketball than he was 30 years ago. After failing to make the tournament in his first 5 years at Auburn, Smith figured he ought to go out and get a player or two to reverse his team’s fortunes. The turning point came when he nabbed a 6-5 power forward from Leeds, Alabama, named Charles Barkley. 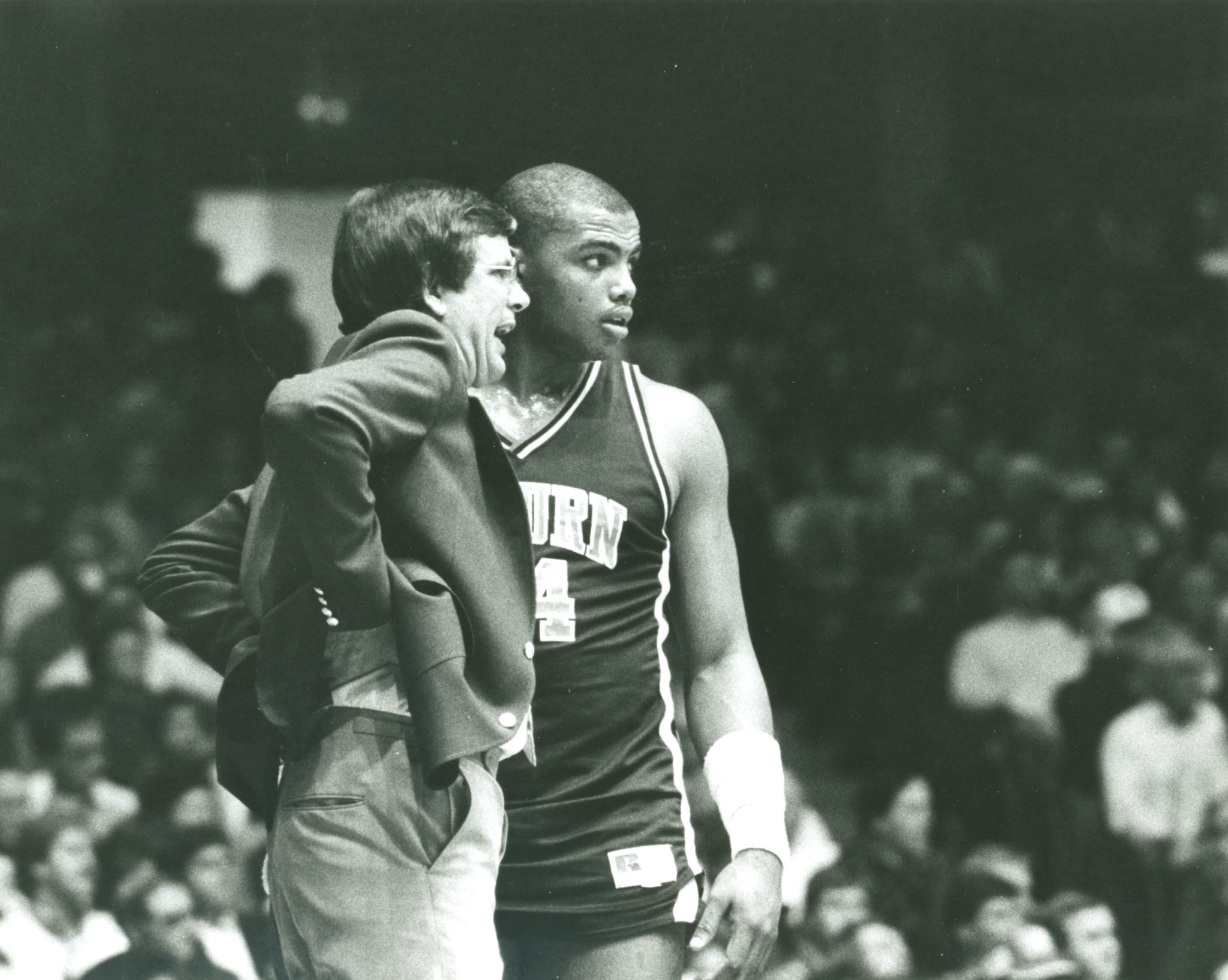 Auburn soon became a tournament regular, making 5 consecutive appearances from 1984-88. In ’86, with the help of another blocky forward named Chuck Person, Smith and the Tigers made the Regional Final, only to be put out by a Louisville team that went on to win the national title. Smith later coached at VCU for 10 seasons and retired from coaching in 1998.

If basketball was the quilt of Smith’s life, relationships served as the thread that stitched it all together. Conference and NCAA tournaments were always the forum for intense competition but also a venue for coaches to connect and reconnect. After retiring, Sonny went to the Final Four for years, and he truly enjoyed running into old pals and swapping stories of old times. “Basketball was the thing that brought us all together, but what kept us together were the relationships,” he said. “I was thinking about the relationships even with the officials, other coaches, and writers. That’s the kind of thing you miss.”

Sonny laughs when he thinks about the dynamics of age as it relates to coliseum seating for the big event. He says the longer he went to the Final Four, the farther his seats were from the floor. “You wouldn’t believe … you might be on the last row in the corner,” he chuckles.

Every year though, Sonny and his wife, Jan, sat beside another former coach who passed the time by chomping on a bag of walnuts. “He would bring walnuts he’d taken off a tree,” Smith says. “Jan, my wife, would always get some of his walnuts. That was one of the things that was fun to me.”

Now that the virus has knocked out the brackets altogether, Smith will not only miss the camaraderie but also says the uncertainty is “taxing.” The not knowing part — when basketball and sports in general might commence — is the thing that’s particularly disconcerting. “It’s different, it’s confusing, it’s something unexpected to me,” he says. “That’s the bad part of this, not knowing, and the time factor that might be involved.”

Many fanatics like Sonny have struggled to find a suitable replacement in a world devoid of sport. Instead of dwelling on it, Sonny chooses to veg on Denzel movies or maybe a Clint Eastwood movie or two. “I don’t let this thing I’m missing wear me out, but if I sat around and thought about it a lot, I certainly would,” he says.

On the other hand, Wimp Sanderson, Smith’s foil during his coaching years and friend in retirement, can’t seem to figure out what to watch.

“Nothing,” Wimp scowls when asked what he’ll be watching in place of basketball. “I was going to watch golf, but they canceled it out.”

While Sonny was patrolling the sidelines at Auburn in the 1980s, Wimp was rabidly coaching his team up in an array of plaid sport jackets that would have made Rodney Dangerfield envious.

But it wasn’t just all show. Wimp won. 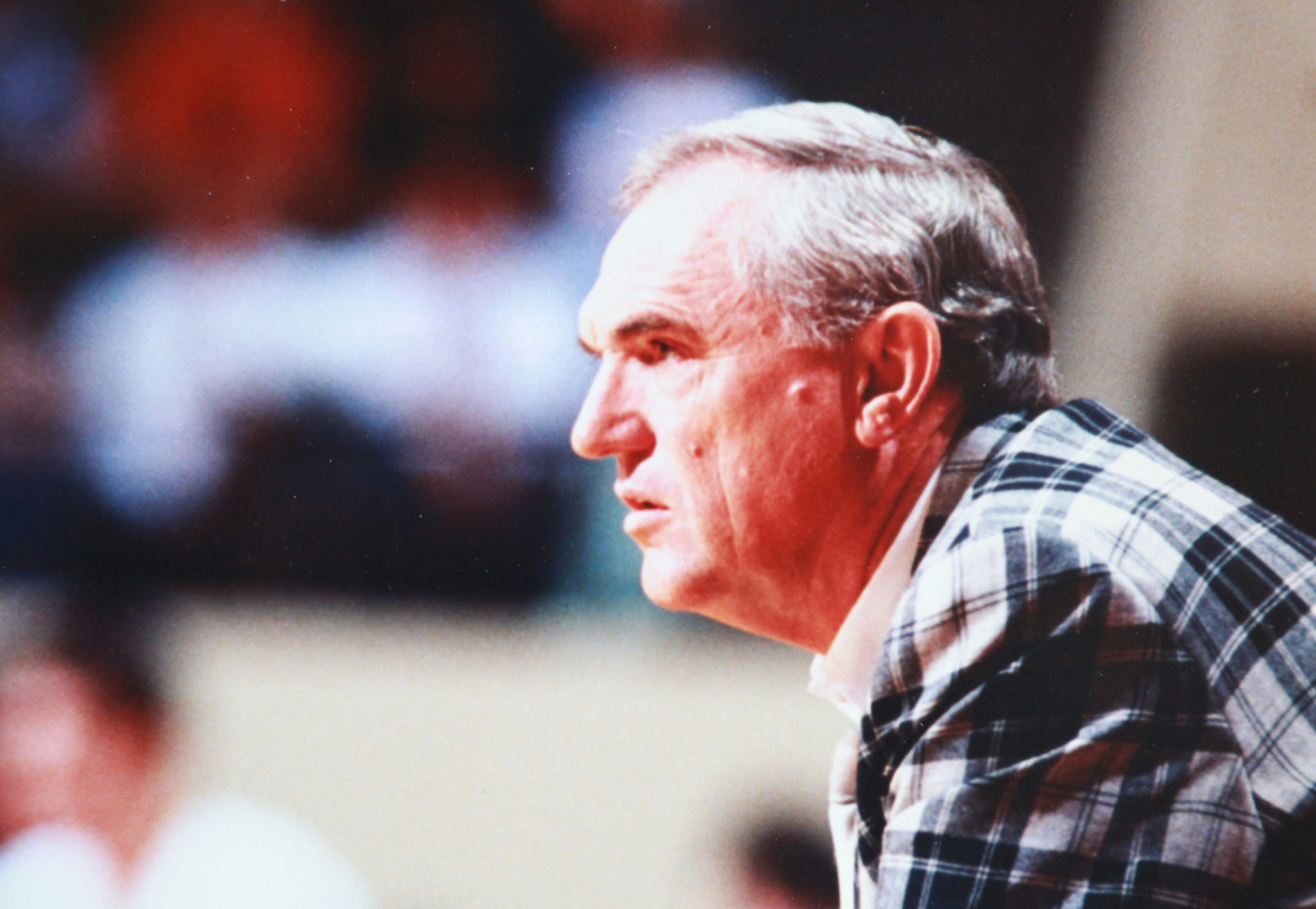 During Wimp’s 12-year tenure as head basketball coach, Alabama visited the NCAA Tournament 10 times, making the Sweet 16 on 5 occasions. In addition, he brought players like Latrell Sprewell, Robert Horry, Derrick McKey, Mark Gottfried and James “Hollywood” Robinson to campus and made Alabama basketball its own unique spectacle in a football-mad state.

Today Wimp hosts a radio show called “Inside the Locker Room” with his son, Barry Sanderson, on 100.9 FM based out of Tuscaloosa.

Now that sports have all but disappeared, Wimp has had to figure out clever ways to fill a 2-hour sports talk show. “I’ve got to try to figure out the best way to do it, and I’m not sure what that is right now,” he says.

In addition to fans not being able to fill out a bracket and follow Cinderella through the ball, Wimp says that the parity between the schools would have made for an interesting tournament in 2020. “Because there’s not a clear-cut winner,” he says. “There never has been a clear-cut winner, but there’s always been about 3 or 4 teams you thought were way ahead. (This year) even your No. 1 seeds are a little bit shakier than they have been in past years. Everyone’s kind of even, and the elites were not really elites. It’s been a different basketball season.”

Wimp, who was so laser-focused on winning, probably didn’t enjoy the NCAA Tournament camaraderie as much as Sonny, but he was looking forward to traveling to Atlanta for this year’s Final Four. “After I quit coaching, I didn’t go to the Final Four,” Wimp says. “After a certain period of time, the way coaches come and go, I didn’t know the coaches as well. But I was disappointed that I couldn’t go to Atlanta this year to see some of the guys I coached against who are still living. That’s going to be knocked out this year. From a personal standpoint, I’m going to miss that part of it.”

In addition to Wimp and Sonny’s personal anguish, there are serious revenue considerations that will be lost, Wimp also points out. Statista.com ranks the NCAA Final Four third in millions of dollars generated per sporting event (more than the FIFA World Cup and more than the College Football Playoff). Kantar Media released an article stating that March Madness generates approximately 1.3 billion dollars of advertising revenue to cover a $771 million tab to broadcast the games. As a result, college basketball will have some serious recovering to do over the next few months.

In the meantime, everyday schmoes whose drab canvases were colored by the vivid strokes of roundball are having to make a hard pivot in living rooms all across the USA.