Bold predictions for 'Cupcake Saturday' (Week 12) in the SEC

SEC Week 12 has been dubbed “Cupcake Week” by many, including our own John Crist. Certainly, compared to last week or the upcoming “Rivalry Week,” there are more than a few uneven matchups in college football this weekend.

But no week is a down week for bold predictions. Auburn/UL-Monroe and Alabama/Mercer might not be exciting to everyone, but they give us another chance to forecast something crazy. We’ll do that. Here’s a bold prediction for each SEC game of Cupcake Week.

Alabama has pledged a “back to basics” week between tough games with Mississippi State and Auburn. What does that mean? How about Bama back Damien Harris personally outgaining and outscoring Mercer? That’s right, I’ll take a single Bama player over the entire Mercer Bears team. Harris has been an underappreciated star, and he’ll shine early on Saturday before getting some rest in the second half.

Mississippi State lost a heart-breaker to Alabama last week. This week at Arkansas? The guess here is that the Arky defense (last in the SEC in points allowed) feels the full wrath of State. The Bulldogs are a strong third in the SEC in rushing yardage, picking up 250.6 yards per game. Arkansas allows 5.3 yards per carry, and only Vandy has allowed more rushing TDs on the season. Smart money here is on a big day for Nick Fitzgerald and a bunch of points for State.

The week’s shootout is Auburn/UL-Monroe

No, it doesn’t stand to reason that Auburn will get much of a challenge from the guys from Monroe. But this could be a shootout. Auburn averages 37.2 points, and ULM averages 37.0. The Warhawks pass for over 280 yards per game, but they also allow 505 yards per contest. At least half of the high scoring should be there Saturday. The over/under is 68 for this game, but we’ll take the teams to top 70.

With Georgia coming off a tough Auburn loss and looking forward to the SEC title game, Kentucky figures to see a decent amount of Jake Fromm. UGA knows what is has on the ground, but in the air, the Bulldogs are next to last in the SEC in passing yards per game. They are 5th in efficiency, so it’s not like they’re awful, but if they’re going to hang with Bama or Auburn the next time around, they’ve got to get better in the air. Fromm will get 300 yards, but don’t be shocked if Kentucky makes enough plays to cover the three-touchdown-plus spread.

Not that long ago, UAB had no football. Saturday, they’re going into Gainesville and coming back with a win. This Florida team doesn’t have the heart to deal with UAB back Spencer Brown, who has rushed for 1,177 yards and 10 touchdowns. Florida is 10th in the SEC in rushing defense, and it might fall a notch on Saturday.

Wofford won’t upset Carolina but will keep it close

Carolina has what should be an easy game against an FCS team. But Wofford (9-1) will run the ball constantly and employ a gameplan that keeps it close. They blow out nobody, but they’re expert at staying in games. For that matter, so is Carolina, so it’s not crazy to imagine this one staying tight for a while.

A&M started off November with a loss to Auburn, but unlike most of its recent teams, Kevin Sumlin’s gang seems to be getting sharper as it goes. The Aggies face an Ole Miss team that is more or less allergic to defense. The Aggies aren’t brilliant in that department, but they’re good enough to win this one by a touchdown, with Nick Starkel going for 400 yards.

LSU may rush for a billion yards 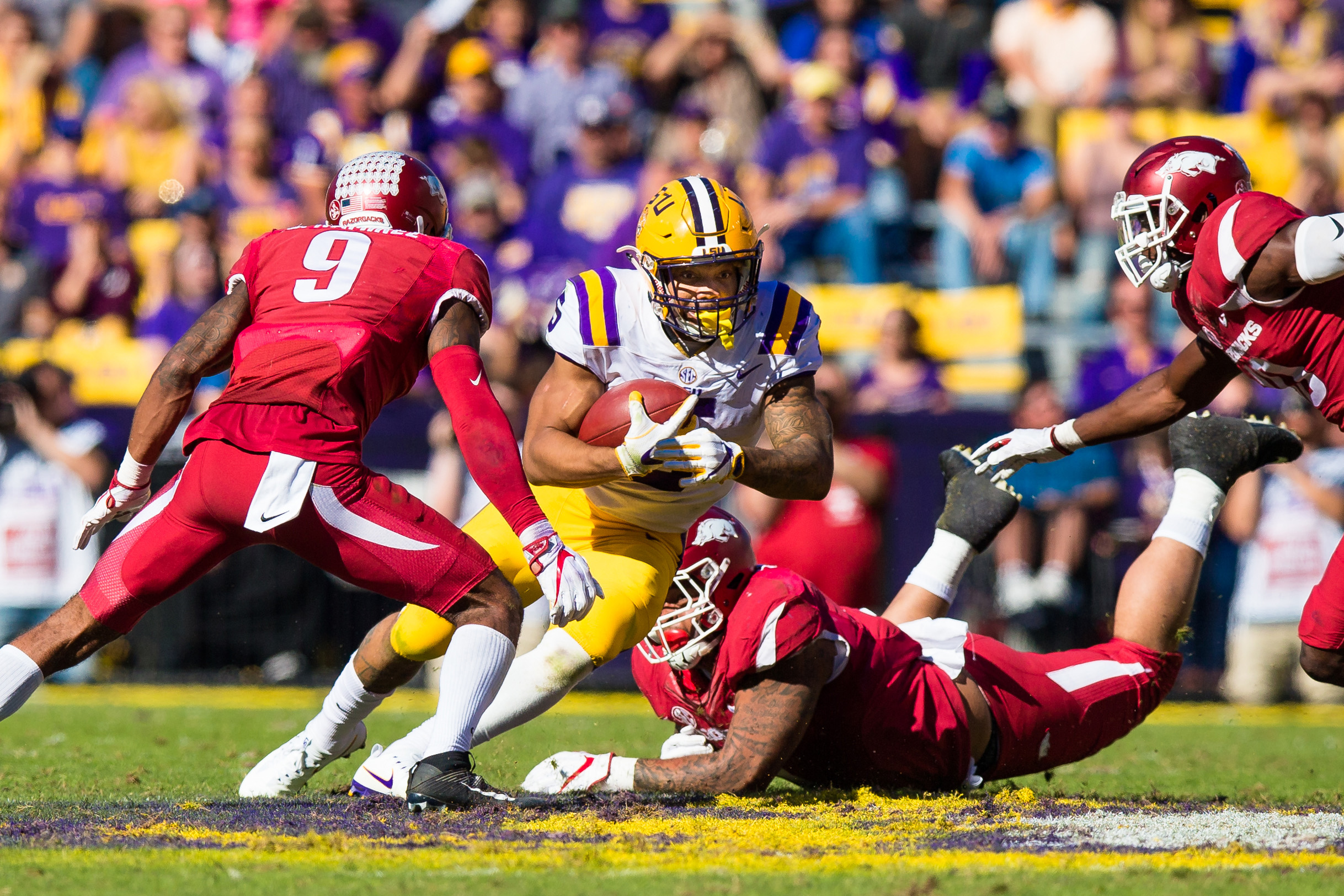 Okay, a billion is an exaggeration, but Derrius Guice goes for 200 in this one easily. Tennessee has been awful against the run for the last two years, and no longer has much of anything to play for. Remember what happened to Florida the week after McElwain was let go? Much as people like the narrative of playing for a new interim coach, it usually goes the opposite direction. Take that spread of -16 and double it.

The Vanderbilt defense has been beleaguered since the season’s first three games. It gave up 44 to a Kentucky team that hasn’t been an offensive juggernaut. It gave up 34 to Carolina and 57 to Ole Miss. Missouri going from the toilet to a bowl is one of the SEC’s hidden stories of the year, and Drew Lock writes another chapter on Saturday. Running back Ish Witter will also rush for 100 yards and a couple touchdowns.