It was a slim week for College Football Playoff contenders as Alabama and Ohio State had games postponed or canceled, and Clemson had a scheduled bye week.

Notre Dame dispatched of Boston College 45-31, and that caused the Fighting Irish to jump Ohio State in the minds of several ESPN writers in the latest CFP picks following Week 11 across college football. Yet Alabama, Notre Dame and Ohio State remain consensus picks, while Clemson received 12 of 14 votes. BYU and Cincinnati are on the outside provided one of those top contenders has a stumble.

All of these teams have stars at quarterback, including Notre Dame QB Ian Book, who improved his record as a starter at Notre Dame to 28-3. He finished the day 20-of-27 through the air for 283 yards and three touchdowns while he had 85 yards and a touchdown on the ground.

Clemson is the only one of the top contenders with a loss. However, as ESPN noted, Ohio State has the trickiest game of the pack next week when No. 10 Indiana travels to Columbus. But given the way the season has gone, the Buckeyes might even be able to afford a loss and still make the playoff.

In the SEC, Alabama is schedule to meet Kentucky in Tuscaloosa, and while they aren’t listed in this group, the other dark horse SEC CFP contenders, Texas A&M and Florida, are scheduled to meet Ole Miss and Vanderbilt this week. 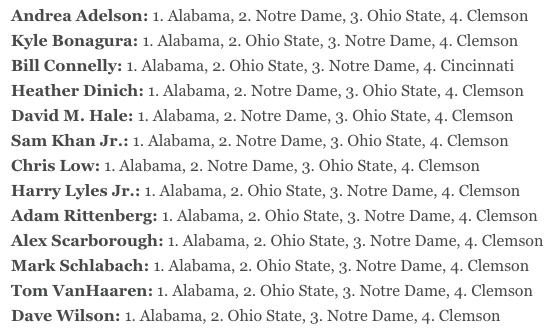