A couple of interesting games on Saturday made people who rank the College Football Playoff teams think twice, but ultimately Ohio State and Cincinnati pulled out victories, even if it was closer than they may have expected early on.

Alabama, Ohio State and Notre Dame remained unanimous among ESPN voters who offer their Playoff picks each week. Clemson is on 12 of 14 ballots, and the other teams in the mix remain BYU and Cincinnati, a landscape that has been largely static for several weeks now. Bill Connelly and Ryan McGee are the voters who put either Cincinnati or BYU in place of Clemson on their ballots.

BYU is one to watch since the Pac-12 presidents and athletics directors allowed non-conference scheduling, and the Cougars only have one scheduled game remaining on their schedule. Cincinnati remains undefeated after a 36-33 win at UCF. The Bearcats are 8-0 this season.

Notre Dame was off this week, while Ohio State pulled away from Indiana after having a close game early, and Clemson’s game with Florida State was called off at the last minute.

Much of the attention largely shifts to the SEC Championship Game, and Clemson’s rematch with Notre Dame to crystalize the rankings. This week also reveals the Playoff committee’s first ranking of the season on Tuesday night, another variable that might influence some of these rankings. 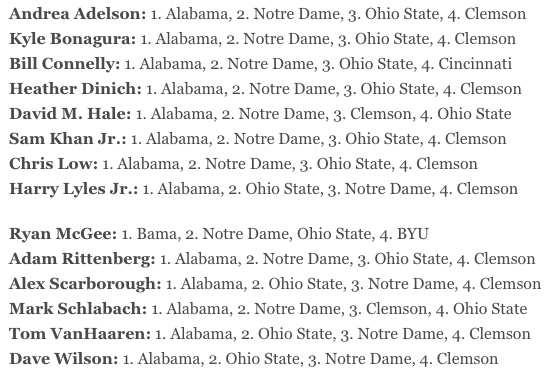